Know your butterflies and moths – Merritt BC

Here we feature some of the common butterflies, and a few moths, to be found in and around Merritt, British Columbia. These are just a few of the dozens of species living in this area, but we hope the information here will help you to identify some local species and spark your interest in these colourful and interesting insects. The information and field notes here, and most of the photos, are provided by Bob Scafe, a naturalist from Merritt and active member of the Nicola Naturalist Society. 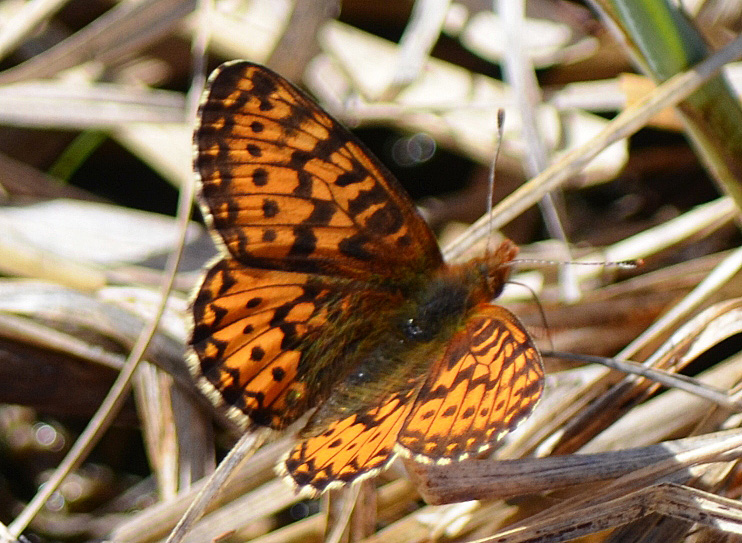 The first Fritillary butterfly of spring. It usually flies in May and June, but sometimes as early as April. The Freija Fritillary is a boreal forest species, found in forest meadows, willow bogs and open places. Sexes are similar.

Larvae: Dark brown, black-spined caterpillars are lighter above and below.

Photo and field notes: Seen April 17, 2015  at Rush Lake on Douglas Lake Road resting on reeds.  I suspect this butterfly had just emerged from the pupa state, as it is so bright, and in such pristine condition. 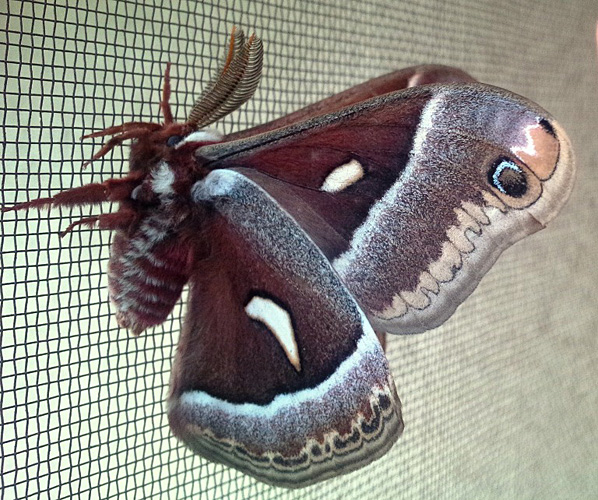 This striking species is highly variable in color and pattern across its range. The adult moth flies April to July.

Life Cycle: Eggs are laid singly or in clumps on leaves of host plants, hatching in 9-14 days. It overwinters as a pupa in a teardrop-shaped cocoon attached to twig on outer part of host plant.

Photo notes: This moth was photographed on May 17, 2015 by Loretta Holmes at Guichon Ranch near Merritt.

This butterfly prefers brushy forest clearings and dry open habitats, but is also found in alpine tundra. It emerges in early April, most often seen mid April in the lowlands, and early summer in the highlands. A similar butterfly, Sara Orange Tip is found in the Hope, Silver Creek to Chilliwack area of Hwy 1.

Photo and field notes: I have photographed these butterflies, mid-April through May, along Hwy 5A side of Nicola Lake, and in Kentucky Alleyne Provincial Park. 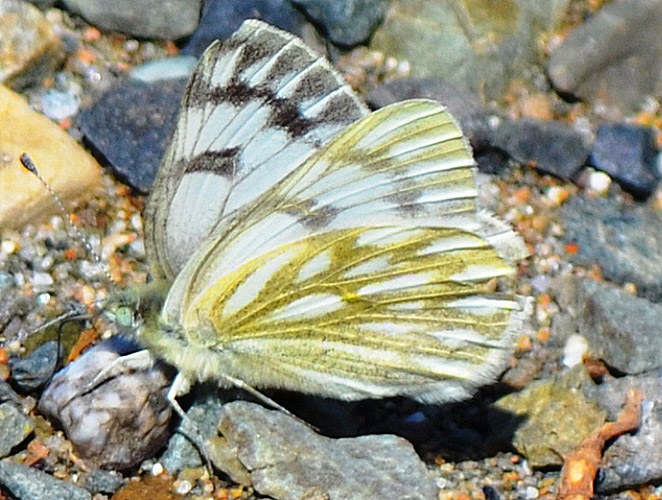 Found in the dry shrubby grasslands of B.C.’s southern interior, this is another early season butterfly. It often surprises viewers with the beauty of its copper-green colouring on the ventral hind-wing. Definitely not a Cabbage Looper.

Life history: Usually two broods in the Merritt area, with butterflies on the wing from mid-March to mid-September, peaking in both May and August.

Photo and field notes: This male butterfly, absorbing salts and minerals from the soil was photographed on May 21, 2015, at a truck pullout near the north end of Nicola Lake. 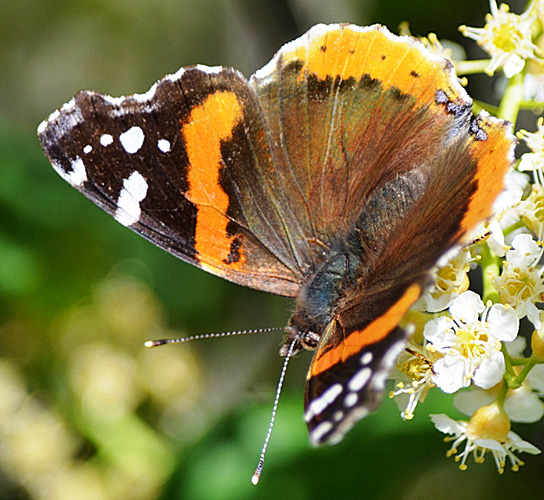 The Red Admiral butterfly may be found in any open habitat, country, city, field, wood-edge, park or garden. It flies from late March to October, with populations peaking July and September.

Photo and field notes: This Red Admiral was found on May 29, 2015 nectaring on flowers in a tree (likely some form of cherry) along Bates Road in Kentucky Alleyne Provincial Park opposite the pot-hole lakes (approx Km. 3.5). This is the only Red Admiral that I saw all summer in 2015. 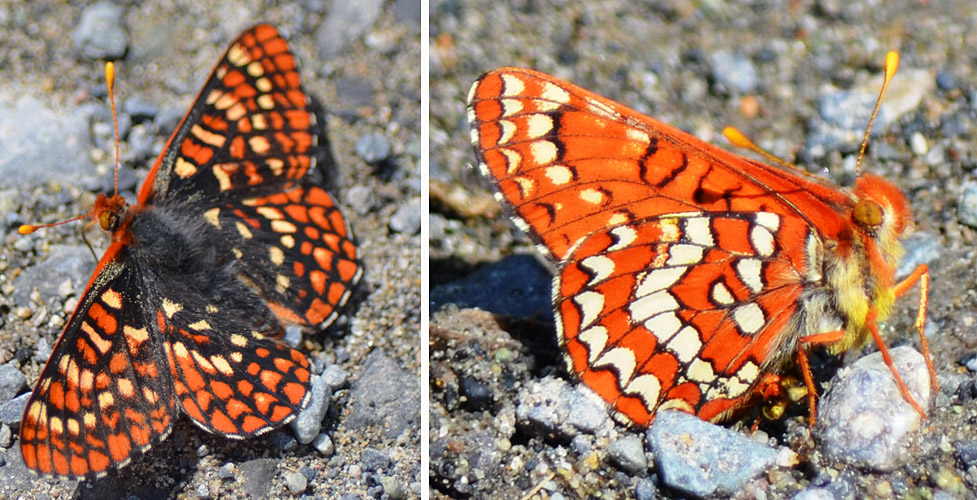 Also called the Chalcedon or Variable Checkerspot (Euphydryas chalcedona). There is considerable disagreement if this is a separate species, or a sub species of the Variable Checkerspot. This locally common butterfly is on the wing from mid-March to mid-August, with population peaks in May-June-July. Found in dry arid to high grasslands, forest openings and alpine meadows.

Larval and adult food: Larvae feed on members of the snapdragon or figwort family (Scrophulariaceae). Adults feed on a wide array of flowers, including chokeberry, dogbane, and stonecrop.

Photo and field notes: Photographed on June 4th, 2015 at Rush Lake on Douglas Lake Road. It has also been found in Merritt, at Nicola Lake, on both Fox Farm and Comstock Forest Service Roads, in the Kane Valley, and at Kentucky Alleyne Provincial Park.

One of the ”signature” butterflies of British Columbia’s west coast and interior, the Lorquins Admiral is widely seen. It appears to be a solitary butterfly, and is easily recognized. It is on the wing from mid-February to early October, with peaks in June-July-August.

Photo and field notes: The pictures were taken June 8, 2015 of the female laying eggs on an ornamental crabapple in our yard, and of the male, later the same day, absorbing salts and minerals from damp soil at the Douglas Lake Road campground.

Speyeria c. leto is the subspecies found in the Merritt area. The male and the female are greatly different in appearance, the male being a bright orange, the female a cheesy white or yellow and dark brown. On the wing early June to early September, the population peaks in July.

Larval and adult foods: the larvae feed on various violets, while the adults nectar heavily on thistle flowers.

Photo and field notes: It is interesting that I have only seen this butterfly on the Loon Lake Road, between Kentucky Alleyne park and the Merritt-Kelowna Connector Highway 97C.

One of the more infamous ”invasive species”, having been imported to Ontario in 1910 in a shipment of hay. This was possible because the European Skipper is the only one of the Skippers found in B.C. that overwinters as an egg. Since then, it has spread westward. Flies early June to early September, peaking in July.

Photo and field notes: The pictures were taken June 26, in the ditch along our fence line. The Skippers seemed to explode from the grass, having just emerged that morning.

This interesting butterfly cannot tolerate our Canadian (Merritt) winters, and so it migrates north from Mexico and the deserts of the southwest United States, arriving here in early May, looking battered and bedraggled. They immediately set about laying eggs on thistle and daisy plants which the larvae consume. When the next generation emerges in late June and July, they are noticeably larger and brighter than the migrants that arrived in May.

Larval and adult food: Larvae feed on thistles and daisies. Adults find nectar on a variety of flowers.

Photo and field notes: This butterfly was photographed Aug 1st, 2015, nectaring on knapweed and thistle at the main Tunkwa Lake road.   It was seen in late May at the DLR campground nectaring on vetches and clovers.

One of the most common, widespread and easily recognized butterflies in the BC interior is the lovely Mourning Cloak. While most large butterflies migrate south in winter, Mourning Cloaks overwinter in our region, and can tolerate deep-freezing temperatures. In fall, they crawl into sheltered spots, like hollow stumps and log piles, and hibernate. They are often one of the first butterflies to be on the wing in the early spring and can be seen all summer too.

Larval and adult food: In spring or summer each female lays about 100 eggs on willows, aspens, or cottonwoods and the emerging caterpillars feed on these trees. In early spring before there are any flowers, adults feed on sap oozing from damaged trees – especially from aspens and other poplar trees.

Photo and field notes: The photos were taken in spring and show the tattered wing edges of overwintering adults. Adults produced later in the summer have brighter, undamaged wings. 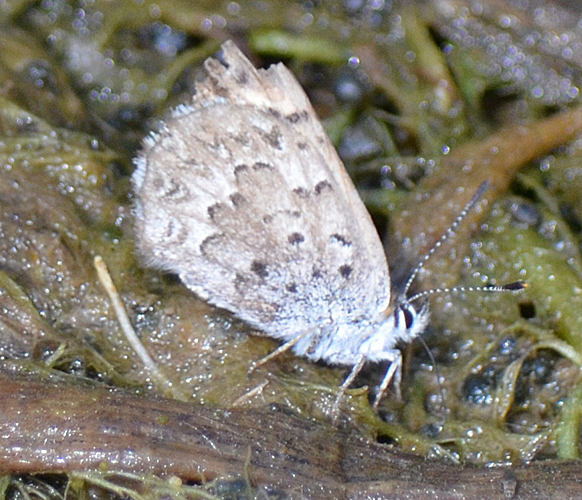 At first viewing, Mariposas are most often thought to be a “Blue”. Takes a bit of practice to get this one right, as the ventral view of the wings is unlike any other Copper. Found in mountain bogs and meadows, clearings in lodgepole pine, roadsides and moist meadows. Mariposas fly late May to Late Sept, and peak in August.

Larval and adult food: This species also differs from Blues in the larval food. The caterpillar feeds on blueberry and bog rosemary, while adults nectar on aster, pearly everlasting, yarrow, oxeye daisy, yellow sedum and spiraea.

Photo and field notes:  The upper picture was taken July 16, 2015, just as Rush Lake  began to show signs of drawdown from irrigation. The butterfly was attempting to draw salts and minerals from vegetation and the damp soil. 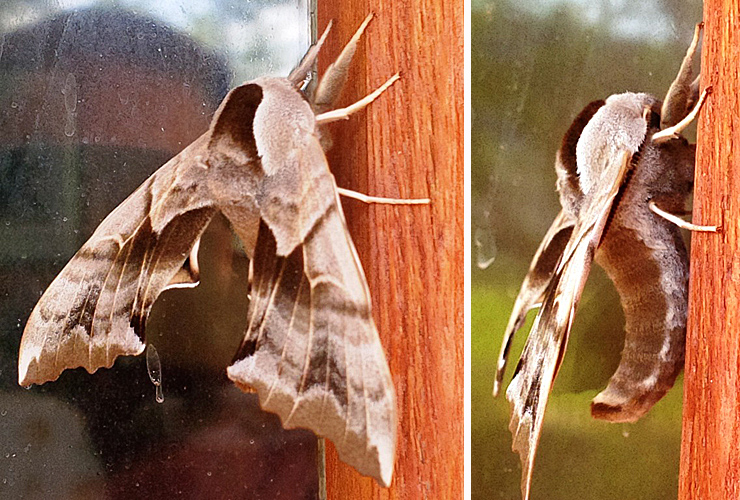 The range of this moth is from southern Alaska, through all of the southern portions of the Canadian provinces, and includes most of the U.S. states along the Canadian border, and is found in a number of south western states. It is considered to be a summer moth. Southerly members of this moth trend to have larger wingspans (95 mm).

Larval and adult food: Larval foods are poplar, willow, pear and plum leaves into which the larvae rolls itself a home, which it then eats. It moults to the next larval stage, rolling itself in another leaf home.

Photo and field notes: These photographs were taken May 20, 2015, by Loretta Holmes, at Guichon Ranch.

The Field Crescent butterfly is a common butterfly of mountain meadows, fields and roadsides. It is likely the second-most abundant crescent species in British Columbia, next to the Northern Crescent. Field Crescents are on the wing mid-May to late September, peaking in June – July.

This species is very similar to the Tawny Crescent (Phyciodes batesii) and many butterfly enthusiasts concede that the similarity of these two species has defeated them in their effort to make a definite determination. It is not a crime to admit you have found an ”Unidentified Crescent”.

Larval and adult food: Larval food plants are asters, while adult butterflies nectar on aster, pearly everlasting, and other composites, plus they also visit coyote scat.

Photo and field notes: The female was photographed at Comstock Road on June 8, 2015, and the male at Kentucky Alleyne, July 3, 2015, both during their peak flight period.

Commas get their name from the comma-like marking on the ventral side of the hind wing. Sexes are similar. Satyr Commas are the most commonly found of the Comma family in British Columbia, and it is easy to find them. These butterflies are territorial and easily spooked, so approach carefully, or simply sit down and await their return. Satyrs are a single-brood butterfly in most of B.C., but have two generations in a year along the U.S. border.

Larval and adult food: Larval food plants are almost exclusively stinging nettle, and possibly some hops. Adult butterflies nectar heavily on Douglas Asters, and other fall flowers, and suck on the scat of various berry-eaters, bear scat being the most common and readily available.

First reaction to this colourful little butterfly is usually, “Oh, another Satyr Comma”, but look again. Note the slightly smaller size, the more ragged wing edges, and the best field mark is the yellow toward the tips of the dorsal front wings (DFW). The Satyr Comma shows no yellow, on the DFW. The ventral view of the wings of the Green Comma, shows a dirty or greyer appearance, compared to the crisp clean browns of the Satyr Comma’s ventral wings.

The Green Comma flies from early March to late September, with populations peaking April – May, and August. It is most often found along sun dappled forest roads, and trails, or in groves of trees in grasslands.

The Green Comma has a wonderful startle reflex, leaping from the ground right in front of you and flying off, usually while you try to recover from the fright. If you stand still, this little butterfly will usually return to within a meter or two of where your heart skipped a beat. It will then wander about on the ground, opening and closing it’s beautifully coloured wings, putting on quite a display. A photographers delight.

Larval and adult food : Green Comma larvae feed on leaves and stems of willows, aspens and alders, and in British Columbia have also been seen feeding on paper birch, and rhododendron. Adult butterflies feed on sap from willow, alder, poplar, and nectar heavily on fall flowers, favouring Douglas asters. They will also be seen sucking the scat of berry eaters, like bears.

Photo and field notes: The photographs were taken early May 2016, about 3 km in on both Fox Farm and Comstock Forest Service Roads.