Final Report for our five-year amphibian monitoring project has been released. Our professional partners in this project, Biolinx Environmental Research, have completed the analysis and write-up of this huge data set. Click here to get your copy (file approx. 2.5 MB):  Nicola Amphibian Report 2011-2015

If anyone wants a higher resolution pdf copy of this report please contact us: nicolanaturalists@gmail.com

Here is just one example of the mapping that resulted from our 2011-2015 amphibian project. This map shows the 10 x 10 km grids in which the Western Toad is found and the dots show the actual wetlands in which it was found. This species is listed as “Special Concern” in Canada so this information is extremely valuable to help protect the toad and its habitat. 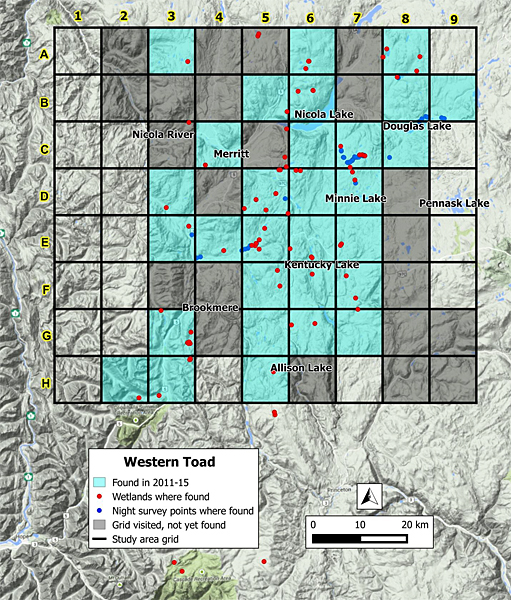 Distribution of the Western Toad, based on surveys from 2011 – 2015 in the Nicola area, showing grid cells, wetlands (red symbols), and night survey
points (purple symbols) where the species was found.

The NNS received grants from the BC Public Conservation Assistance Fund to assist with the amphibian monitoring project. The Biolinx team also received funding from the BC Habitat Conservation Trust Foundation to participate in this project. Our project is part of the BC Frogwatch program.

Other reports from this project:

Keep scrolling down to see links to earlier reports and web-postings.

Under the guidance of Dr. Kristiina Ovaska, a herpetologist from Biolinx Environmental Research Ltd. in Victoria, the Nicola Naturalist Society is undertaking a multi-year amphibian monitoring project. The first phase of the project is to survey local wetlands (lakes, ponds, beaver dams, streams) to find the best places for long-term monitoring. After training by professional biologists, club members do regular sampling and counting of frogs, salamanders and their tadpoles to determine seasonal and annual variations in abundance and distribution.

We’ve also been working with BC Parks since 2011 to reduce the roadkill of migrating toadlets in the campground of Kentucky-Alleyne Provincial Park near Merritt. The reports on this project are available here too (link to the latest report is above; for earlier reports scroll down). 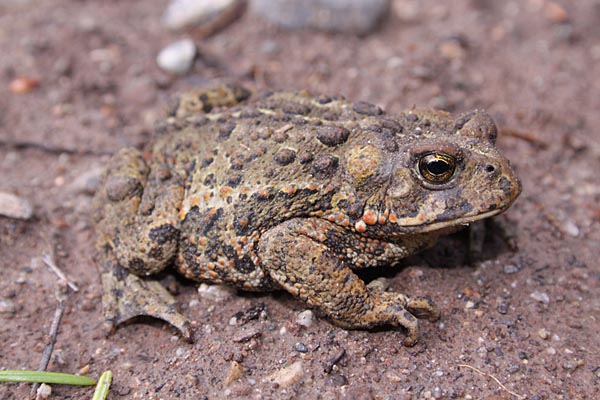 To find out more about volunteering for this project click here to download a 2-page information sheet. NNS Amphibian handout Apr2011

The project has a dedicated e-mail address to contact the volunteer coordinator or leave messages for the project biologists: nicola.amphibians@gmail.com

The links below give more information on this project, allow you to download the data sheets needed for monitoring and reconnaissance, and give updates on the workshops and other events.

Links for further information and events on the amphibian monitoring:

Posts on the amphibian project: