Good weather and plenty of open water made for a good count on 15 December 2019. This was the 21st Christmas count for the Merritt circle. We had 31 field observers and one feeder-watcher. Our total of 66 species was slightly above the 21-year average (61 species) and the total count of  3,699 birds was close to the average (3,644 birds). Scroll down for more details and photos.

To see the complete set of results and data from past years click here: Merritt Xmas Count data 2019 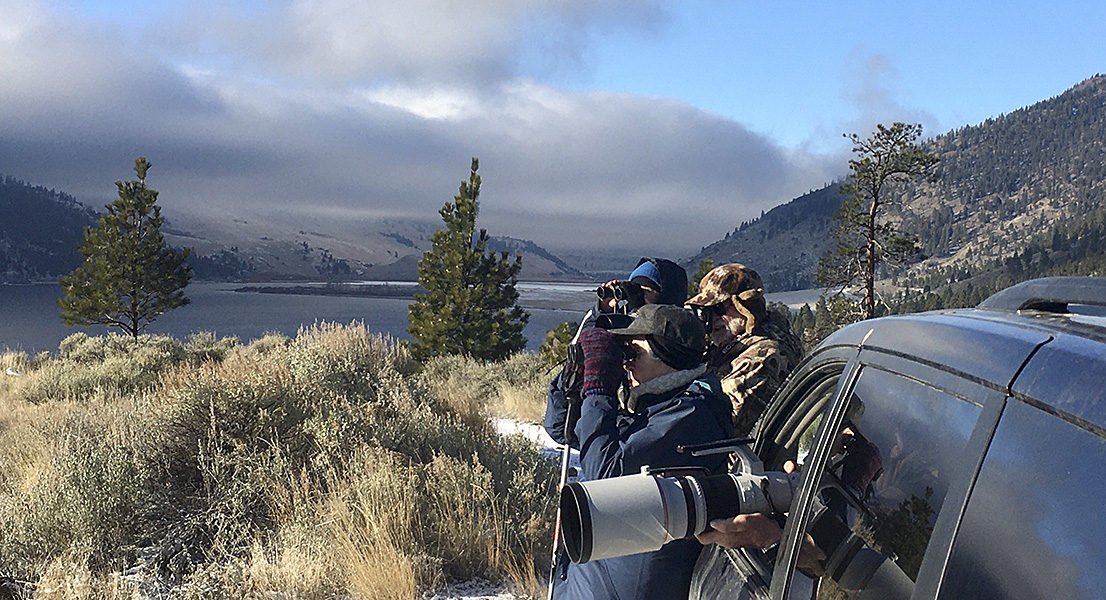 Binoculars and big lenses in action on the Merritt CBC 15 December, in area B2 overlooking Nicola Lake. Photo: ©Kyla Strange.

Two new species were added to the Merritt count long-term list. Wayne Weber and his group heard three Virginia Rails calling in a reliably ice-free spring near Coutlee and this species was confirmed again with play-back two days later. Sharp-eyed birders in the B2 area at Nicola Lake picked out Cackling Geese among a flock of the smaller types of Canada Geese and at least five were subsequently identified in a photo of part of this flock. 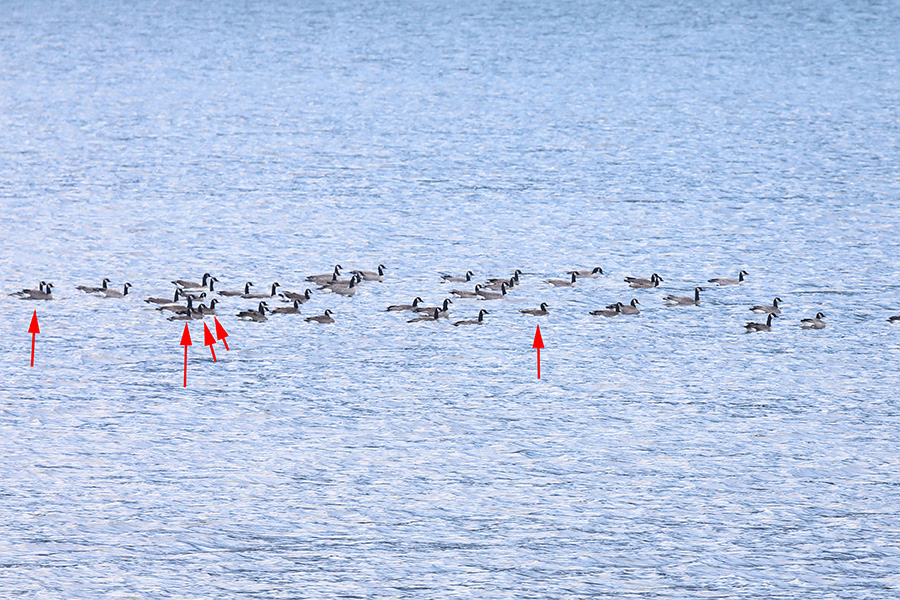 At least five Cackling Geese were identified among the Canada Geese in the high-resolution version of this photo from Nicola Lake. Cackling Goose was split from Canada Goose as a separate species in 2004, but there is still considerable confusion in identifying them. Photo: ©Murphy Shewchuk

Other notable species were Peregrine Falcon, Greater White-fronted Goose and Northern Shoveler, all recorded for only the second time in a Merritt CBC . 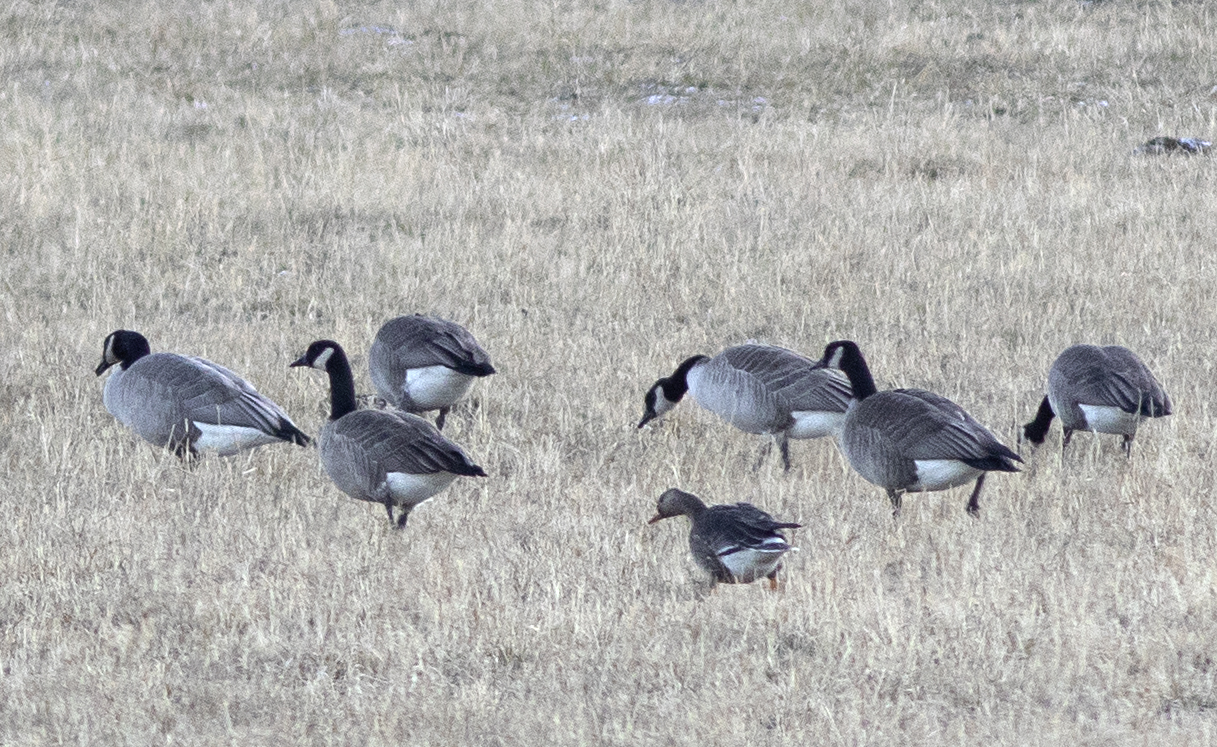 Nicola Lake was mostly ice-free, with only shoreline sections ice-covered, and there were many other places with open water. As a result we had good numbers of waterfowl and record high counts for Trumpeter Swans (129 birds, previous high 57), Tundra Swans (7, previous high 3), American Wigeon (74, previous high 50) and Northern Pintail (17, previous high 2). This was only the third year that Tundra Swans have been recorded on a Merritt CBC.

A panorama composite showing some of the 129 Trumpeter Swans that were found on Nicola Lake on 15 Dec 2019. Photo: Alan Burger 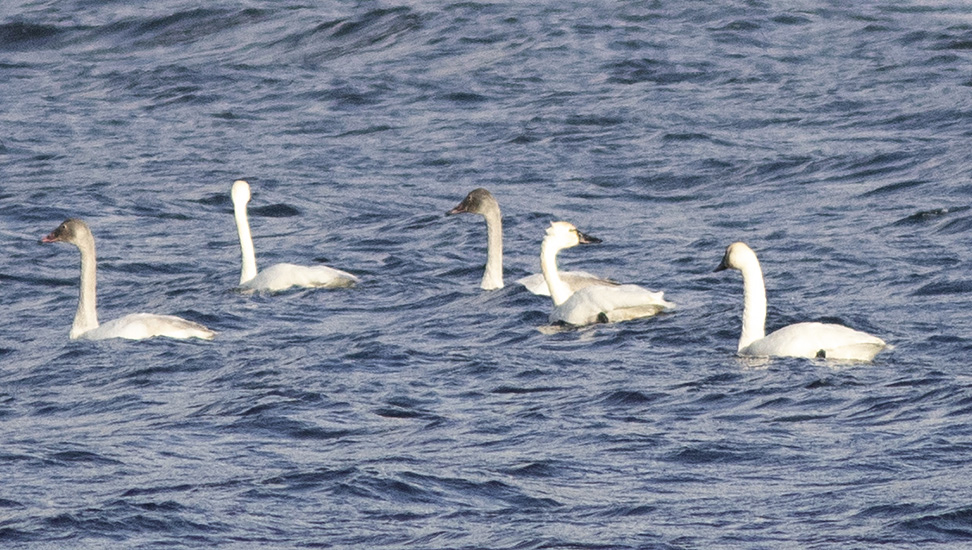 Other waterfowl, like Canada Goose, Mallard, Gadwall and Ring-necked Duck were also in above-average numbers. 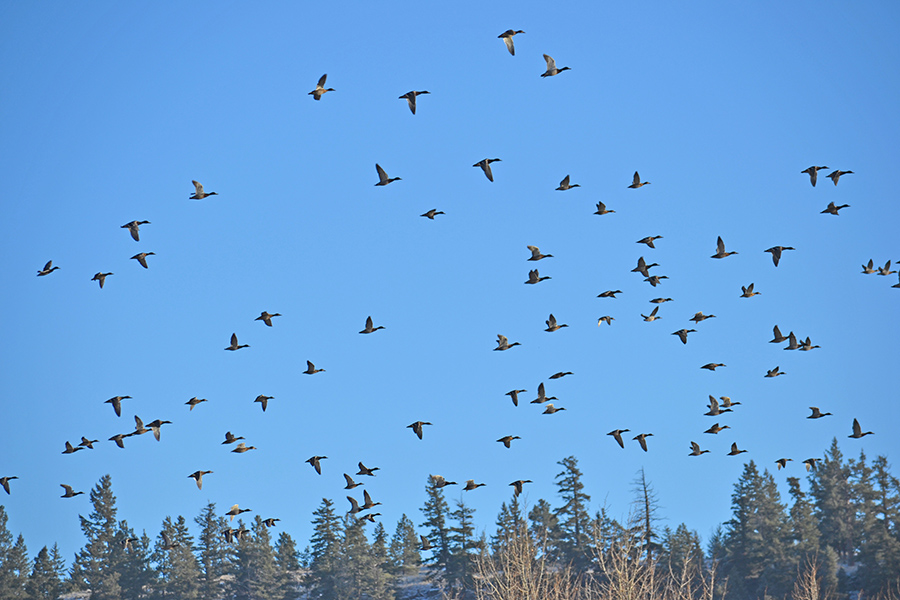 A flock of Mallards over the Nicola River. Photo: ©Paul Willms 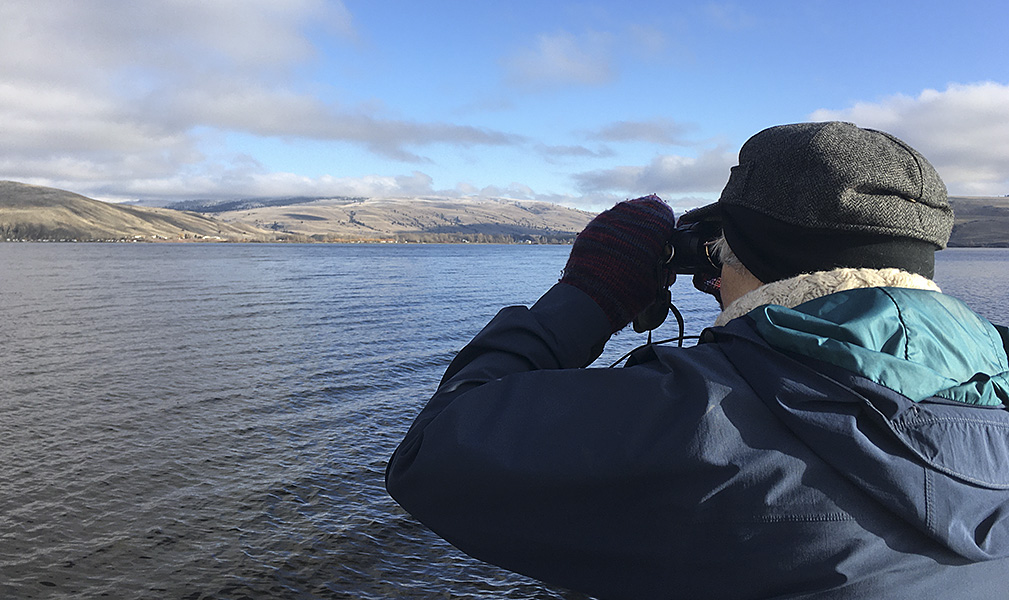 Counts of town, forest and upland birds produced mixed results. The group in area D produced a near-record count of five Ruffed Grouse during their hike on Lundbom Common – their secret was to take along a couple of dogs that sniffed out the grouse in areas where there were tracks in the snow. The 12 Spotted Towhees matched the previous high count. American Kestrels (6, previous high 3), Steller’s Jay (38, previous high 37), Black-capped Chickadees (96, previous high 58) and Brown Creeper (4, previous high 2) also broke the records. 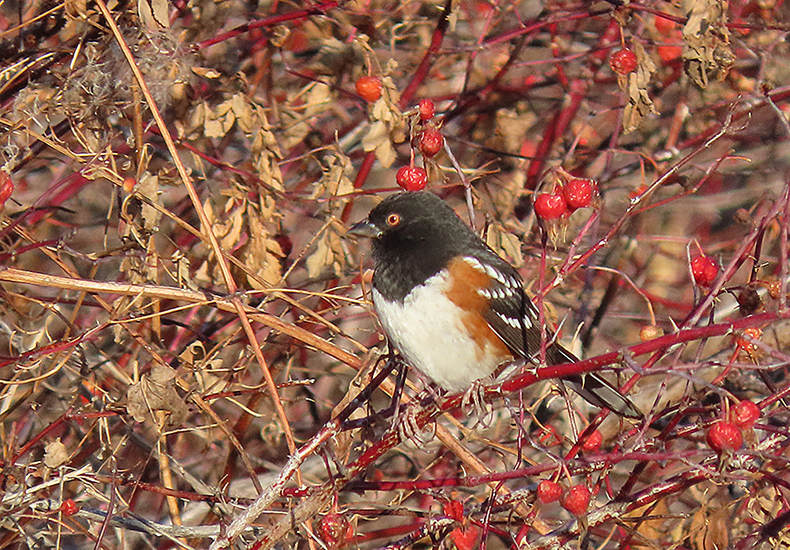 Beautifully framed by rose hips, this Spotted Towhee was one of 12 seen on the Merritt Christmas Bird Count. Photo: ©Vic Newton 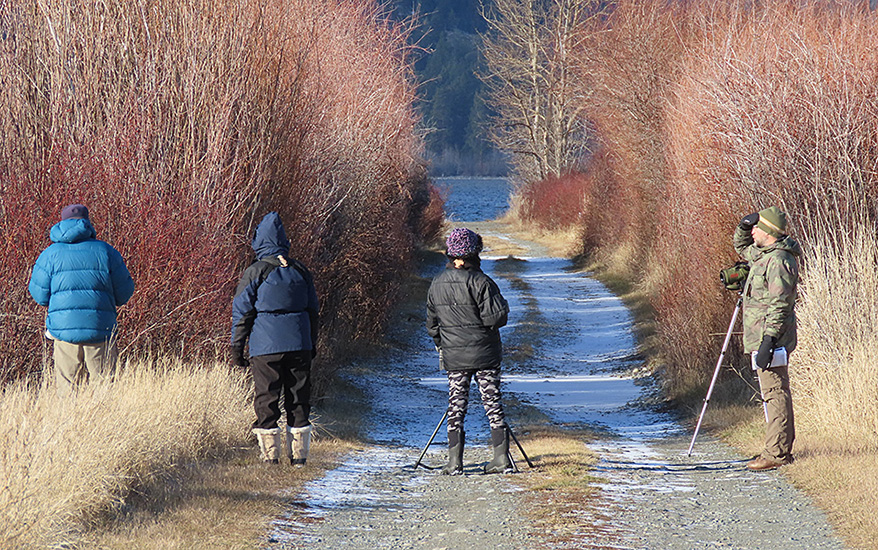 “Beating the bushes” for land birds. A couple of American Tree Sparrows were found in this thicket at Quilchena. Photo: ©Vic Newton 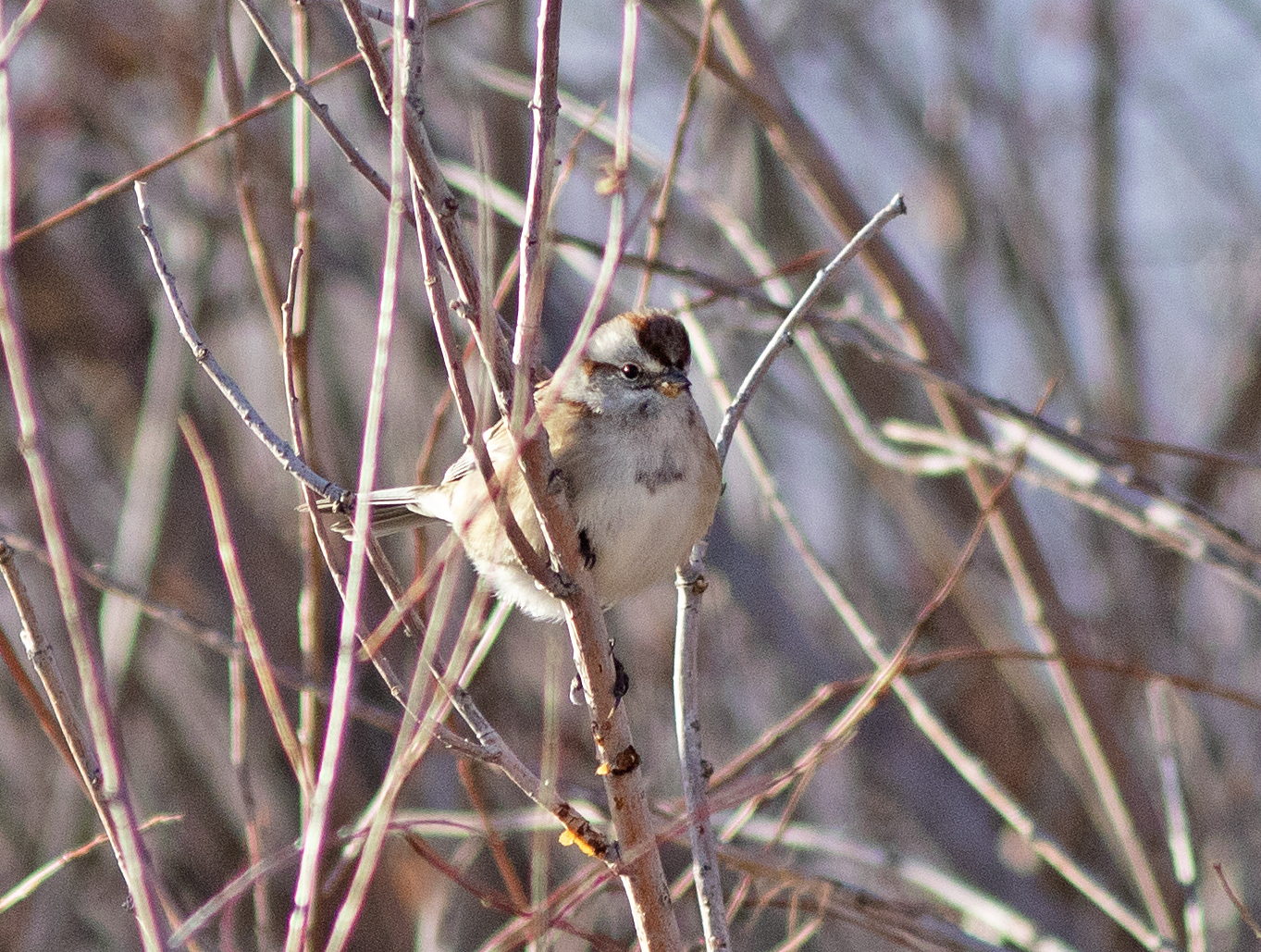 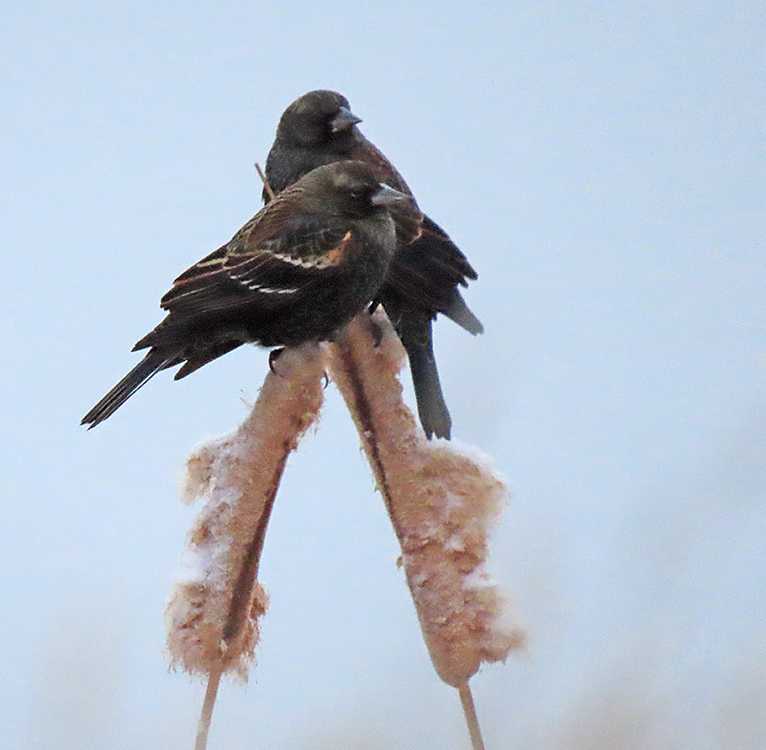 Red-winged Blackbirds emerging from the cat-tails in the early morning. Photo: ©Vic Newton

The big miss of the day was Pine Siskin. There has been a massive drop in numbers following last winter’s huge influx of siskins, when we had a record 391 on the Merritt count. American Goldfinches were also in short supply with only 9 seen, compared to the average count of 48 birds. On the other hand, there was no shortage of House Finch, with 353 recorded, the second highest count in 21 years. American Robins were a near miss, with only one found on the count day, compared with the average of 23.

As usual we wrapped up the day with a pot-luck get-together, this year in the United Church hall. With an excellent supply of tasty appies, mains and desserts, we tallied up the numbers and shared the day’s stories from each of the seven groups. 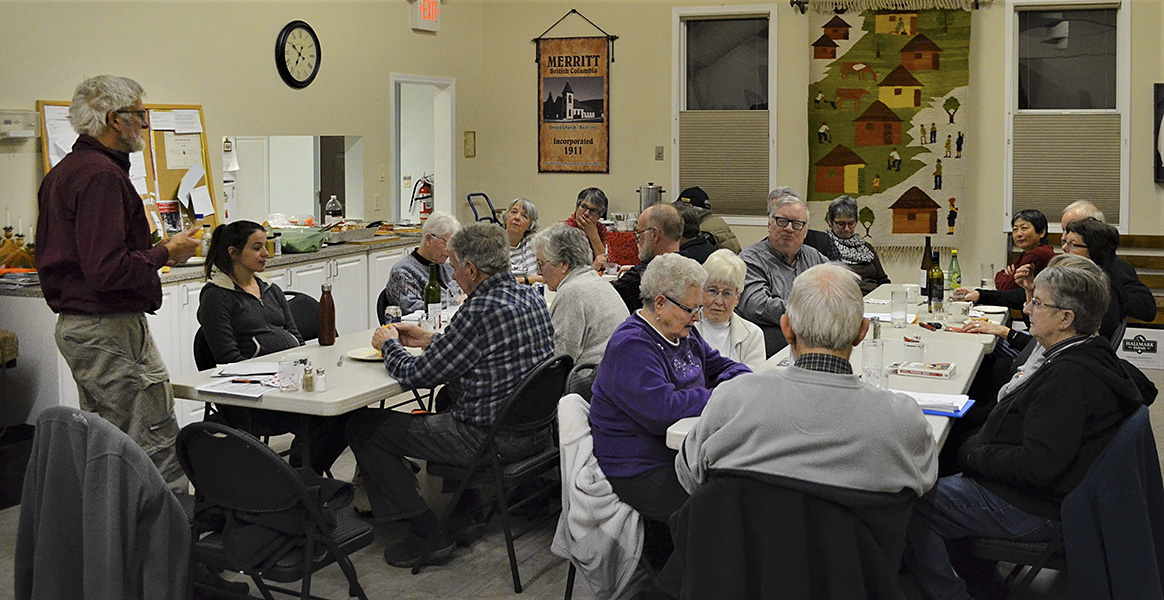 Our post-count get-together and pot-luck is always a time to share stories and highlights from the day’s birding. Photo: ©Bob Scafe