Our club held its first camp for members on 20-22 July 2018 at Frank Chisam’s campsite. Situated about half way between Merritt and Spences Bridge and right on the Nicola River with the Kettle Valley Railroad trail running right past the gate, this was an ideal spot to relax and explore. Eighteen NNS members camped – in tents, RVs or campers – and three others joined us for day activities. Several campers brought their bicycles to ride along the KVR trail – with the bridge right in front of the campsite, we could go both downstream and upstream for decent bike rides on a very gentle slope.

Here are some photos from our camp. 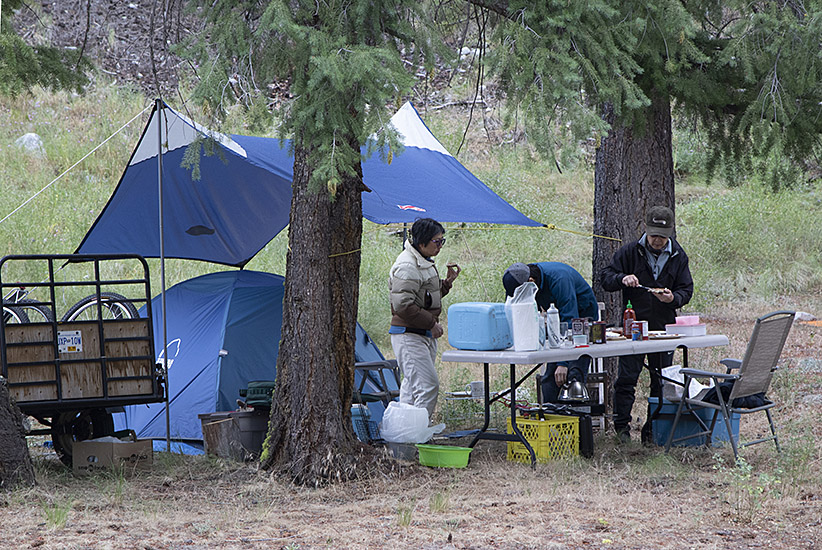 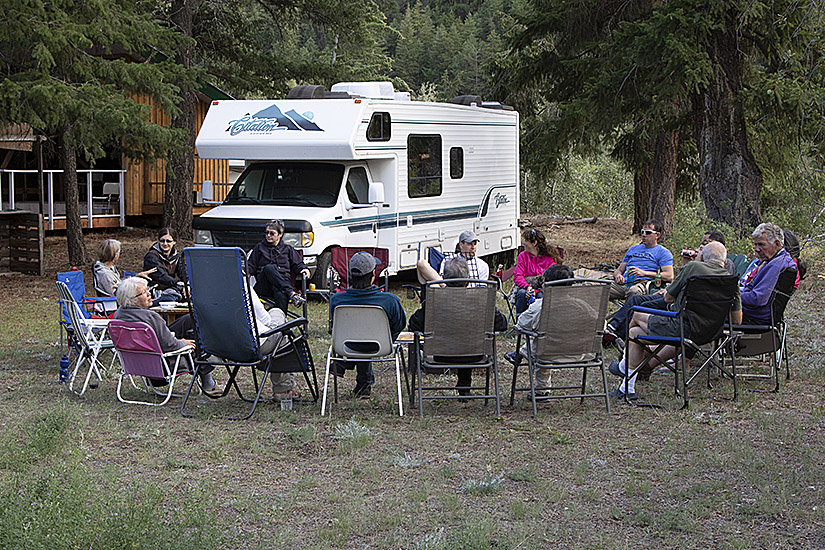 Sitting around the campfire in the early evening. Photo: ©Alan Burger 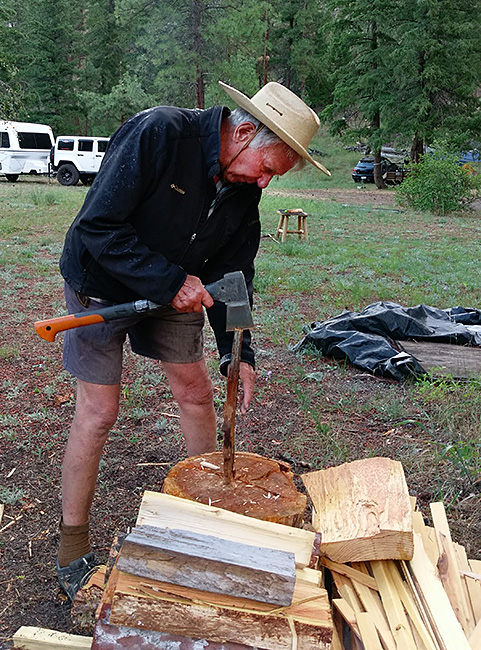 Norm gets the wood ready for our campfire. Photo: ©Anne Pang 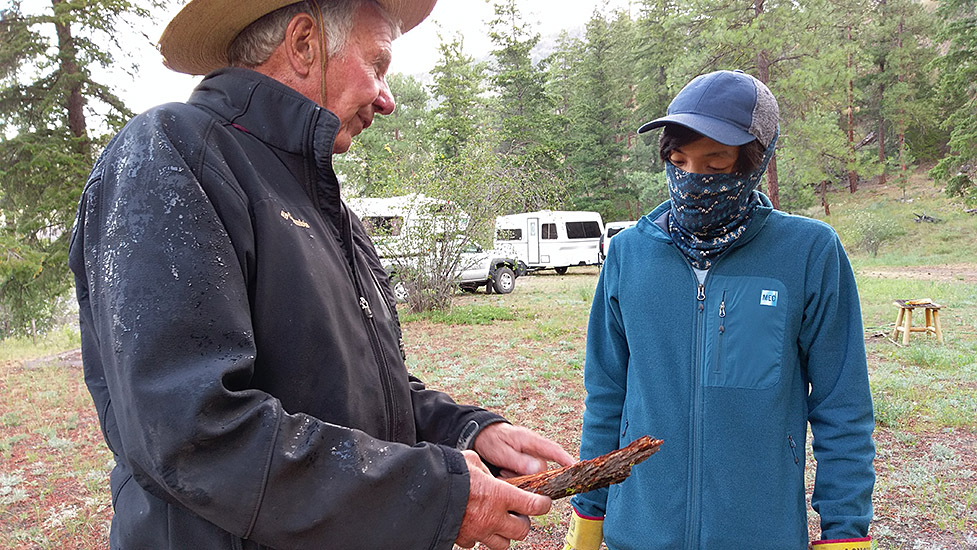 Ivan is getting a lesson in being a woodsman from the master woodsman himself – Norm. Photo: ©Anne Pang 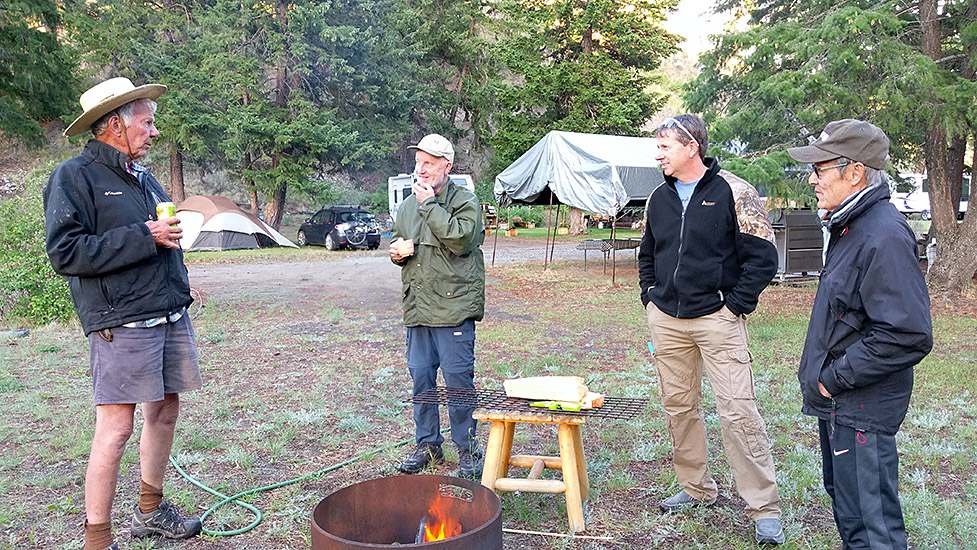 The campfire is a focal point of our weekend. Photo: ©Anne Pang

A major feature of our camp was a visit and presentation by local Shackan Band elder Jimmy Toodlican. We were enthralled by the stories, legends, and explanations of his people’s culture that Jimmy told us. He also showed us leather articles that his grandmother had made and decorated in the traditional manner. 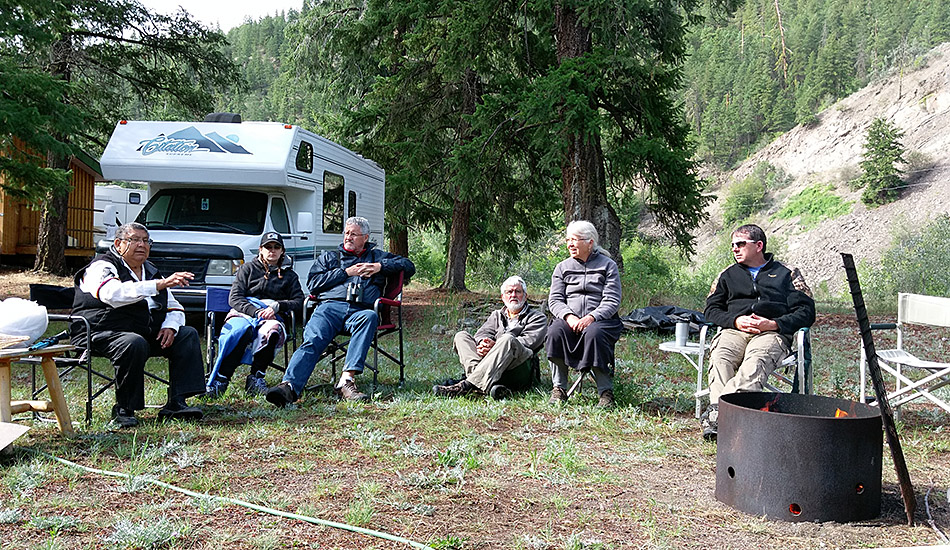 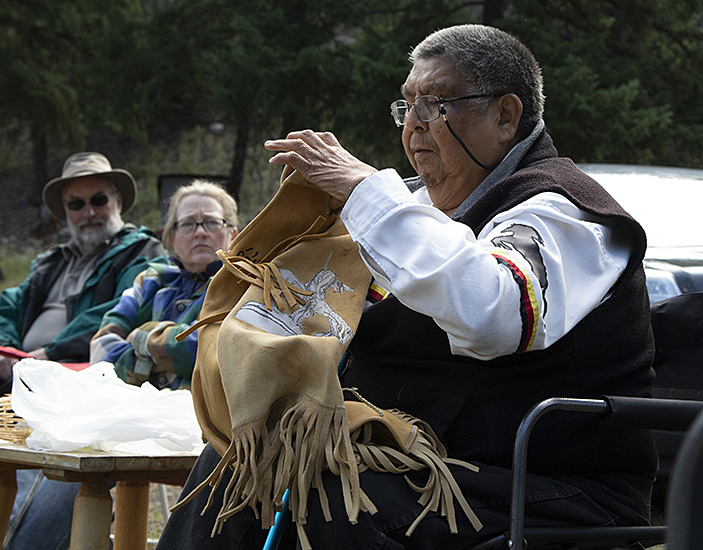 Jimmy Toodlican showing us a deerskin jacket that his grandmother made and decorated in the traditional manner. Photo: ©Alan Burger 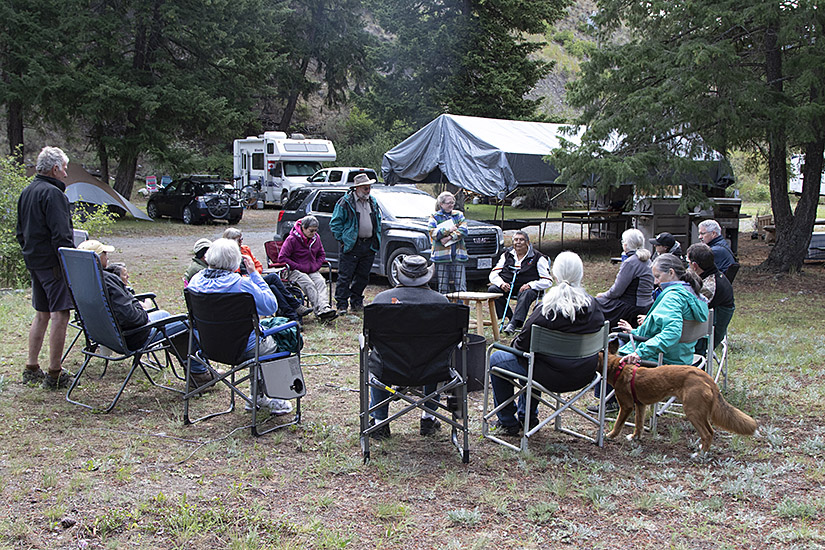 Sitting around the campfire as elder Jimmy Toodlican tells us about his people’s history, culture and use of native plants. Photo: ©Alan Burger

Later, Jimmy led us on an excursion towards Spences Bridge to see some of the archaeological sites and important features of his neighbourhood. 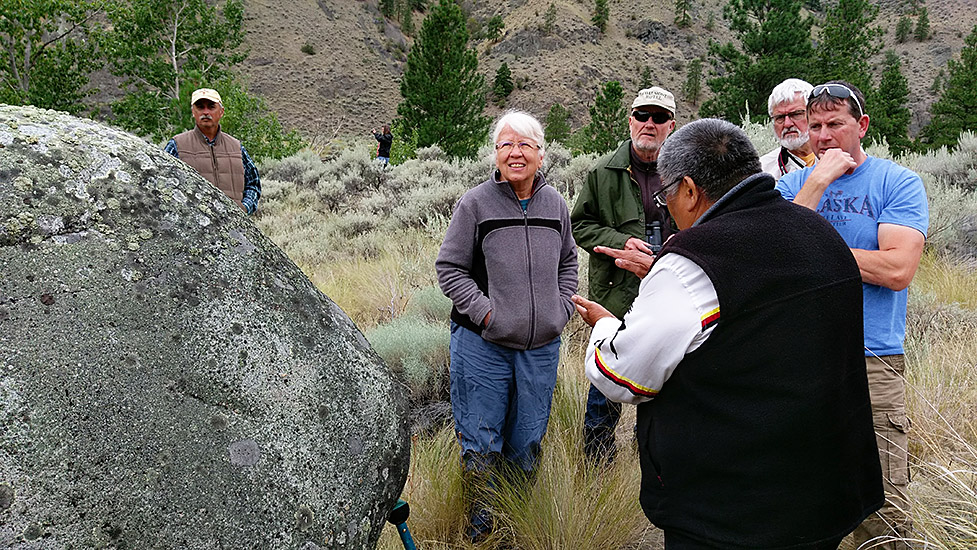 Jimmy Toodlican tells us about the people that lived near this huge boulder with its pictographs. Photo: ©Anne Pang 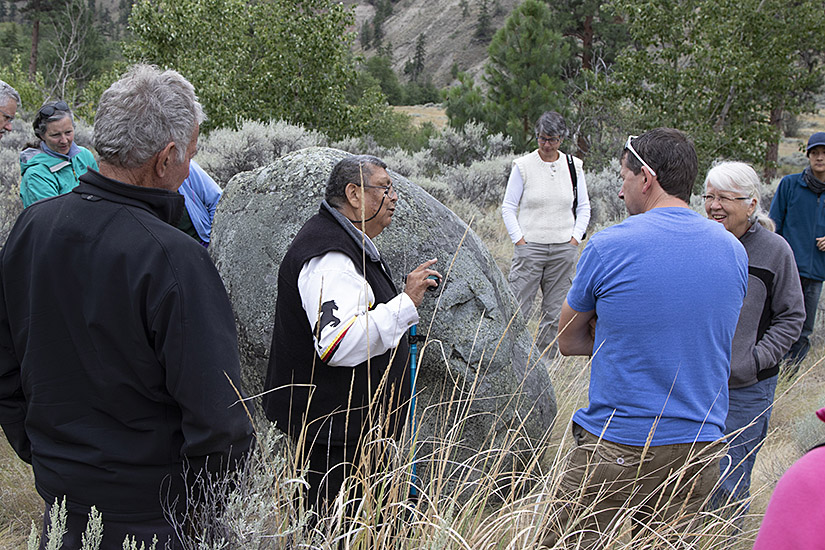 Jimmy Toodlican explains the significance of the pictographs on this huge boulder. Photo: ©Alan Burger 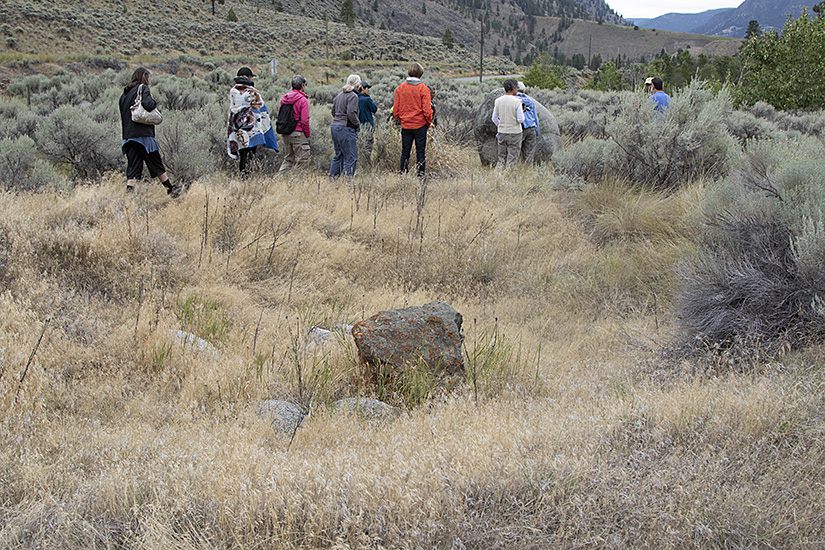 These boulders lie in the hollow where there was a pit house over 100 years ago. Situated close to the Nicola River these pit houses were roofed with pine poles covered with branches and soil to make a well-insulated winter home. Up to 15 people could live in one of these houses. Photo: ©Alan Burger 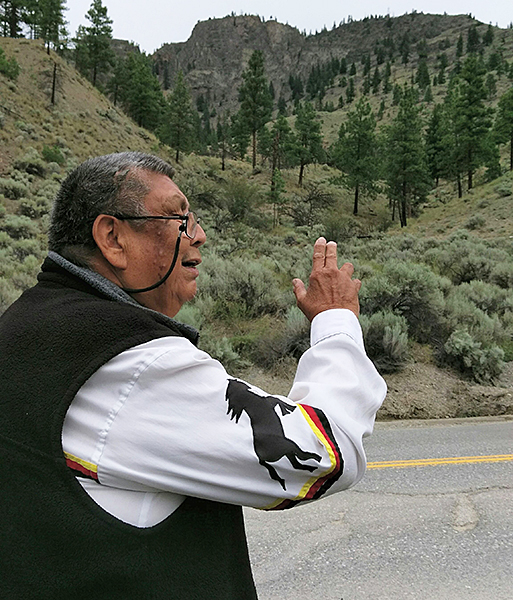 Elder Jimmy Toodlican points out some of the important sites used by his people in past times and some still used today. Photo: ©Anne Pang.

On our drive down the lower Nicola Valley we encountered a large herd of Bighorn Sheep. With rams, ewes and lambs all present this herd was very cooperative allowing us great views and photo options. 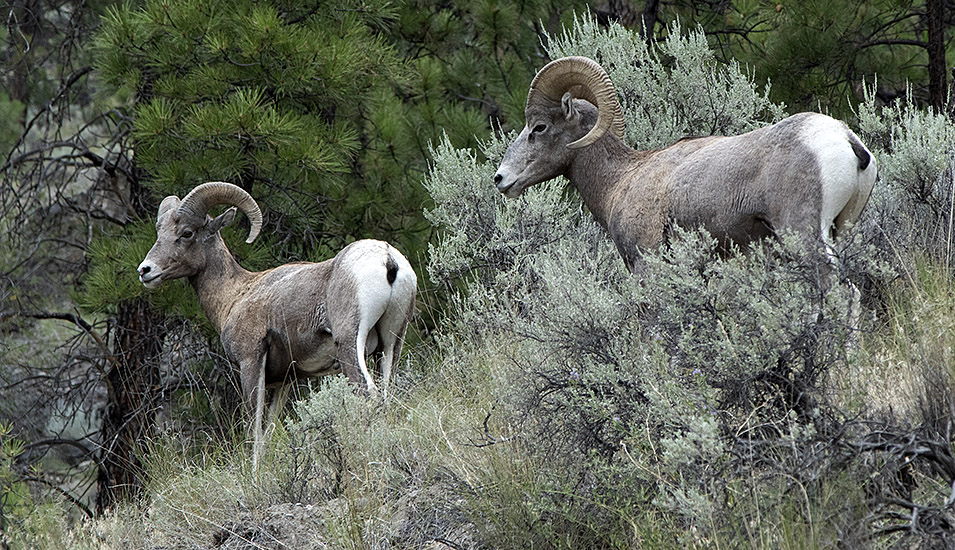 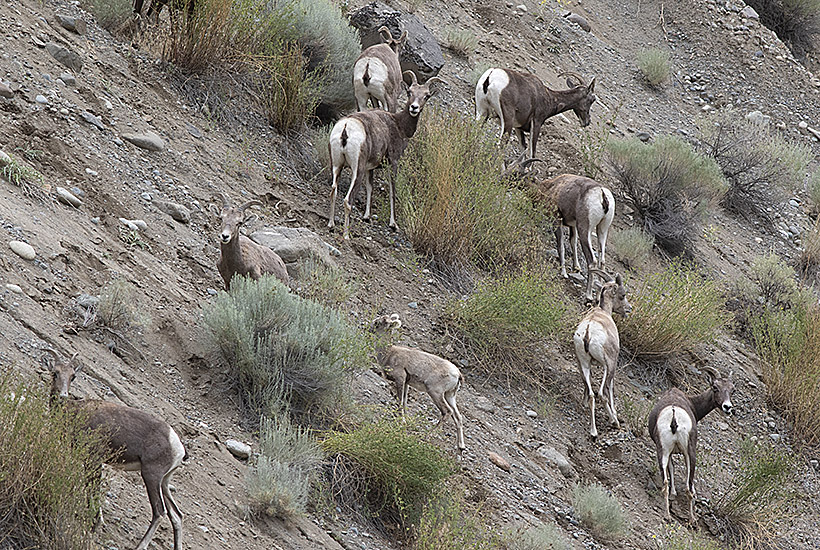 The pre-breakfast birding excursions with Alan were popular on Saturday and Sunday mornings. Even though many of the bird species had stopped singing, we still ended up seeing and hearing 47 species. A pair of Eastern Kingbirds nesting in the trees above the campsite kept us entertained throughout the weekend. Click here to see the full list of birds and mammals recorded on the camp weekend:  NNS Chisam Camp July 2018 bird list 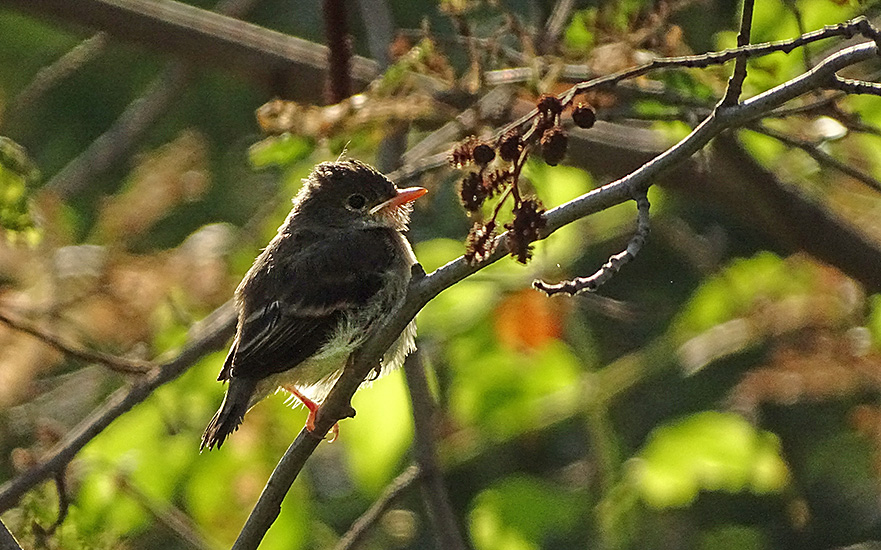 A recently-fledged Willow Flycatcher juvenile is backlit by the morning sun. Several pairs of Willow Flycatchers were breeding in the thickets along the KVR trail bordering marshy areas. Photo: ©Anne Pang

On Sunday morning Norm led us on a hike up the slopes above the Nicola River near Spences Bridge to look for some fossilized logs that he knew about. Our route took us through some interesting dry habitat, with Ponderosa pines, cactus and sagebrush. From our lunch spot we had lovely views up and down the lower Nicola Valley with hoodoos, cliffs and scenic outcrops. 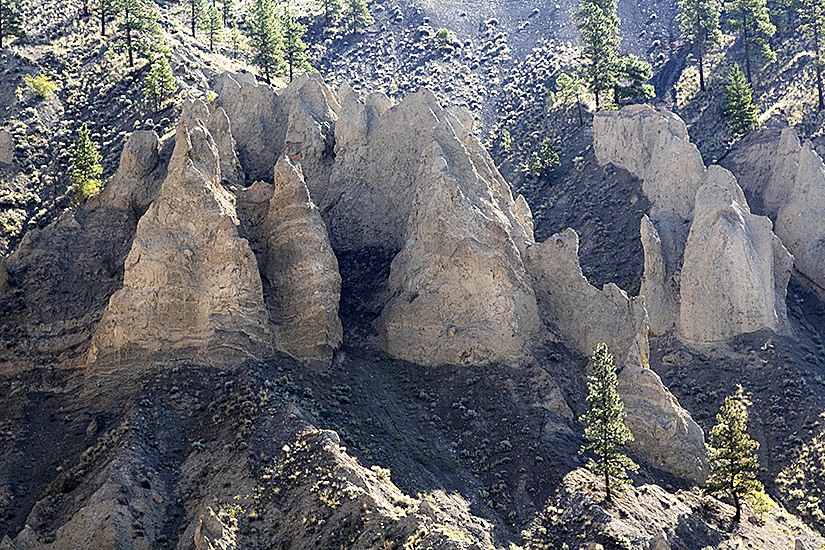 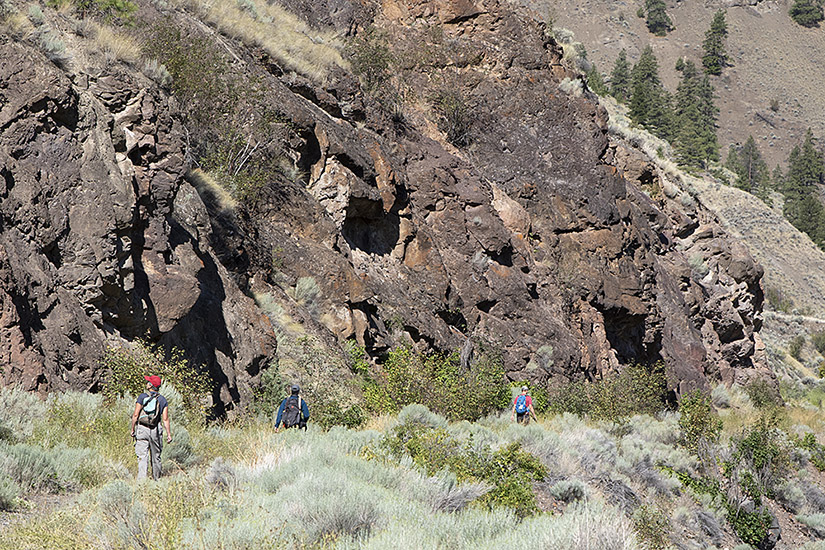 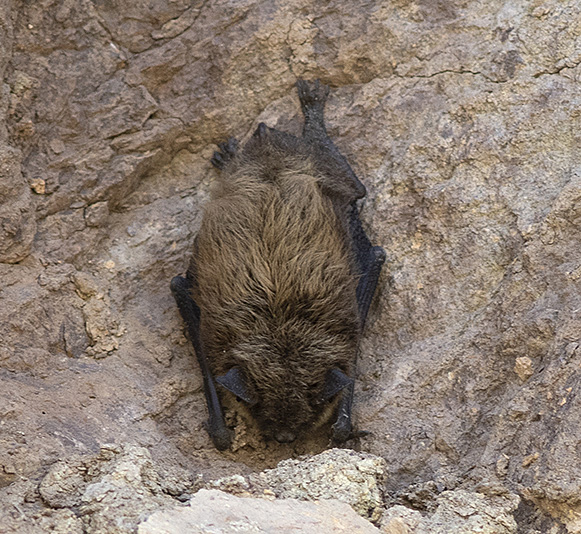 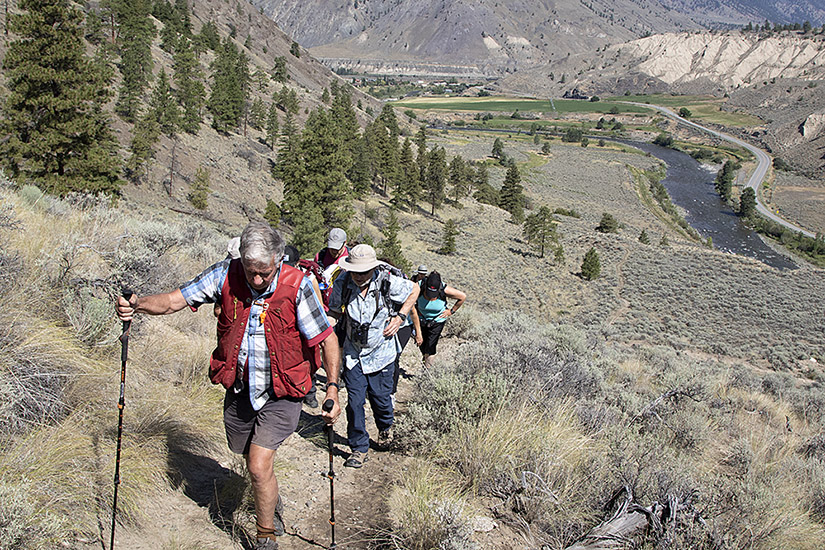 Norm leads our group up the cattle trail above the lower Nicola River. The town of Spences Bridge is in the distance. Photo: ©Alan Burger 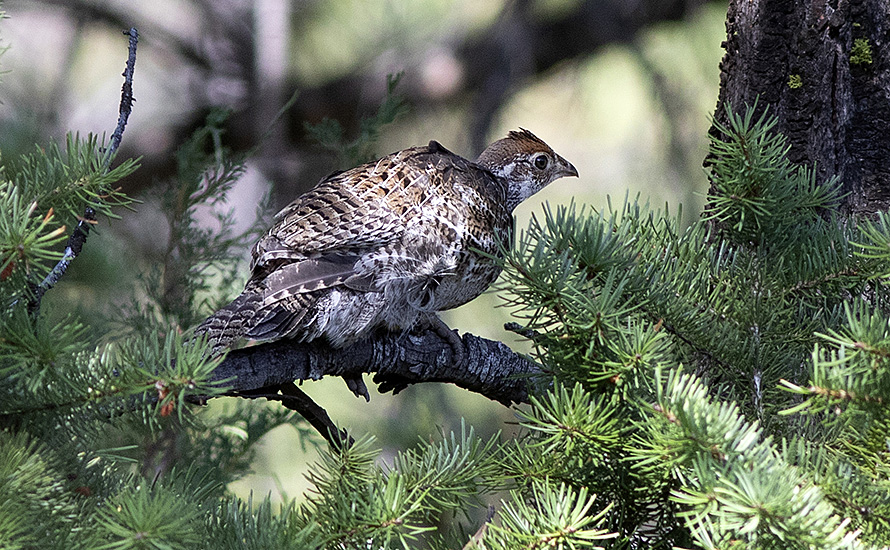 A juvenile Ruffed Grouse sits in a tree as our hiking party goes by. Photo: ©Alan Burger 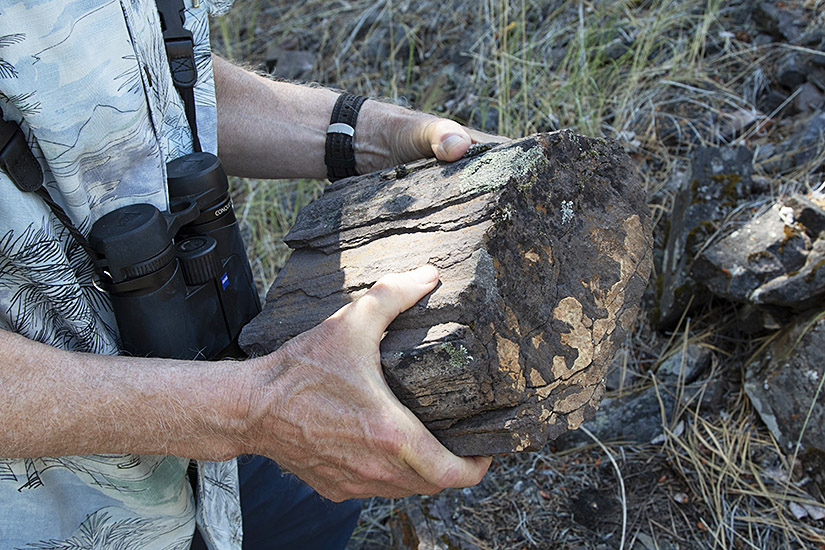 One of the fossil logs found on our hike high above the Nicola River. Photo: ©Alan Burger 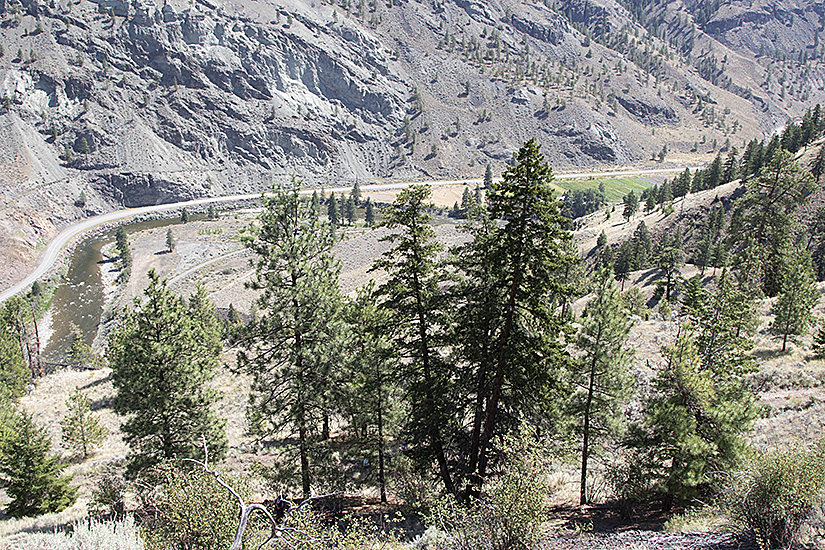 Looking down at the lower Nicola River and Highway 5 from our lunch spot. Photo: ©Alan Burger

We hope to make a summer camp an annual feature for our club members.

This entry was posted in Features, Past meetings, Photos, Projects, Uncategorized. Bookmark the permalink.