Our club headed up to the Douglas Lake grasslands twice this April to monitor the migration of Sandhill Cranes. The Douglas Lake Plateau Important Bird & Biodiversity Area (IBA) was established primarily because of its importance as a staging ground for thousands of cranes heading north in the spring. Our club, along with the Kamloops Naturalist Club, are the custodians of this IBA, checking on bird numbers and factors that might be affecting birds. All our monitoring is done from the public roads. Having an outing coincide with a lot of cranes is always a bit hit and miss – but we did well this year.

On 11 April a small convoy of club members drove up to the grasslands, following strict anti-Covid guidelines. We encountered four groups of cranes on the Douglas Lake Ranch – two groups (8 and 84) near the Englishman Bridge, one group of 54 on the wetlands west of Chapperon Lake and a large aggregation of 150 at Chapperon Lake itself. In total 296 cranes for the day. Here are some photos from 11 April: 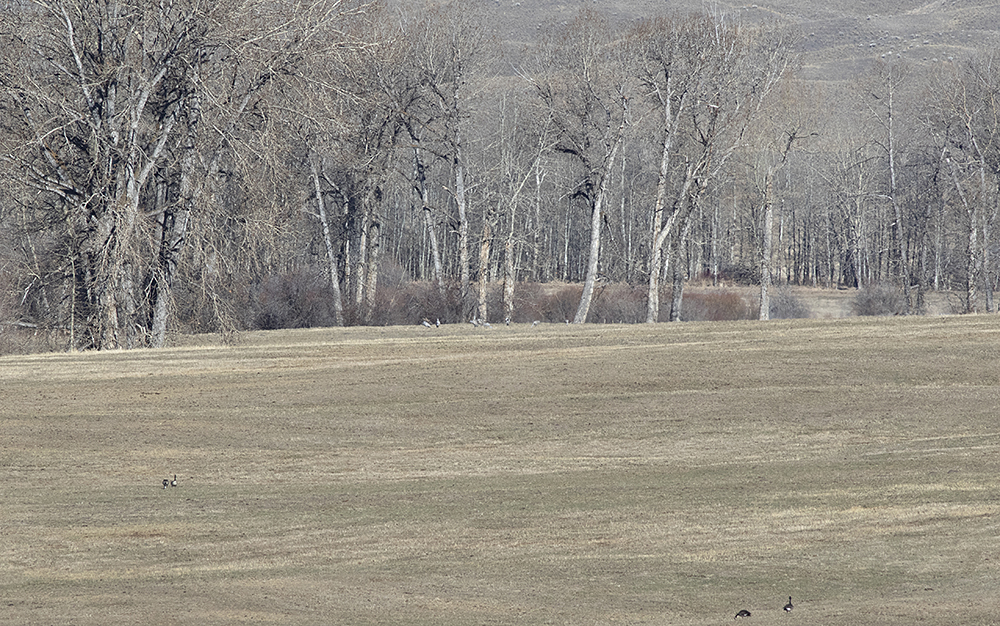 Spot the cranes? On April 11th this was our first small flock of Sandhill Cranes – way across the field next to the trees. Two pairs of Canada Geese closer. Photo: © Alan Burger

Then just around the corner, a larger group on the irrigated field. 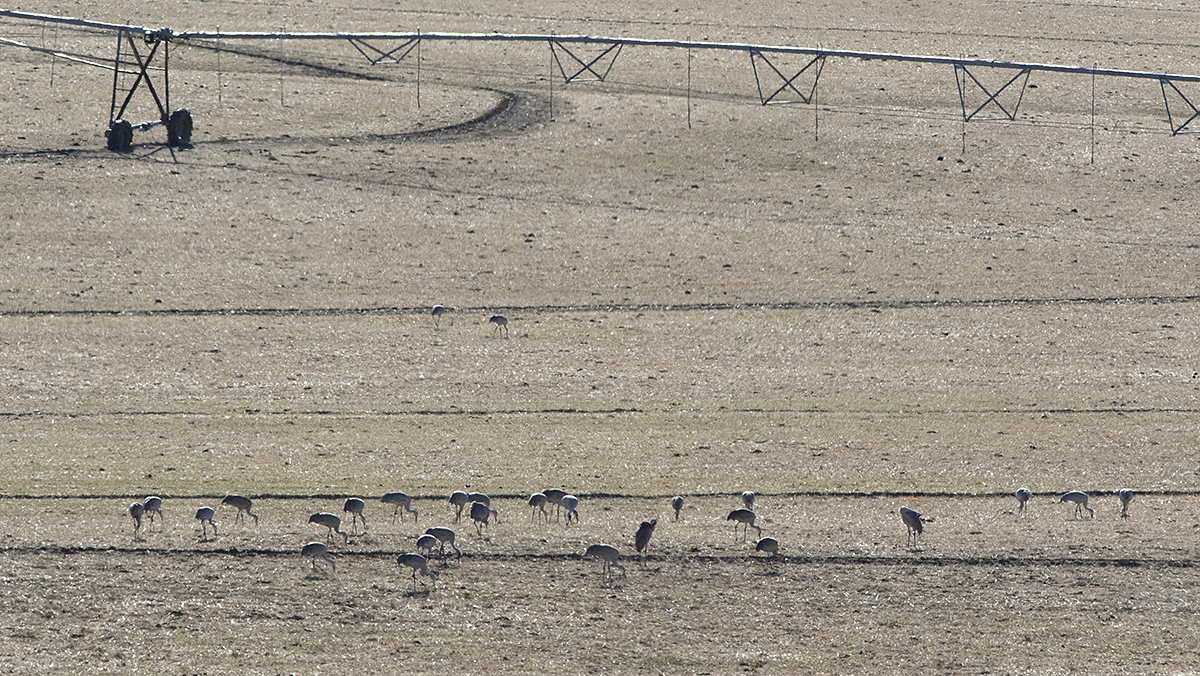 The wetlands west of Chapperon Lake are often a great place for migrating cranes and some were there again this year: 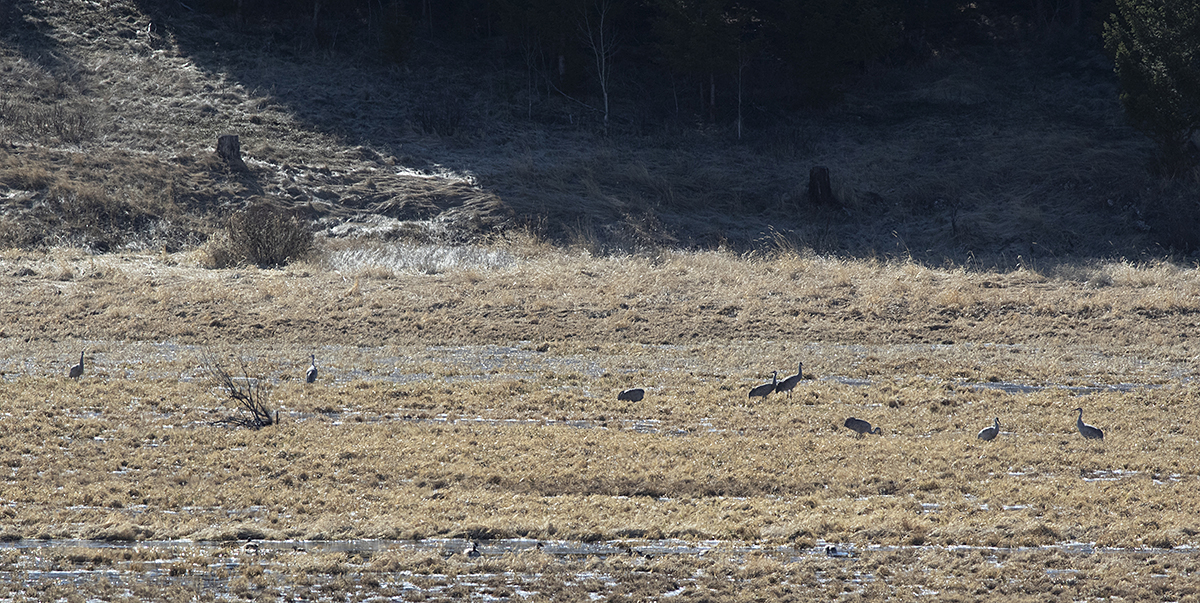 Finally, at Chapperon Lake we had large flocks flying past the road, giving their distinctive bugling calls – wonderful sights and sounds. 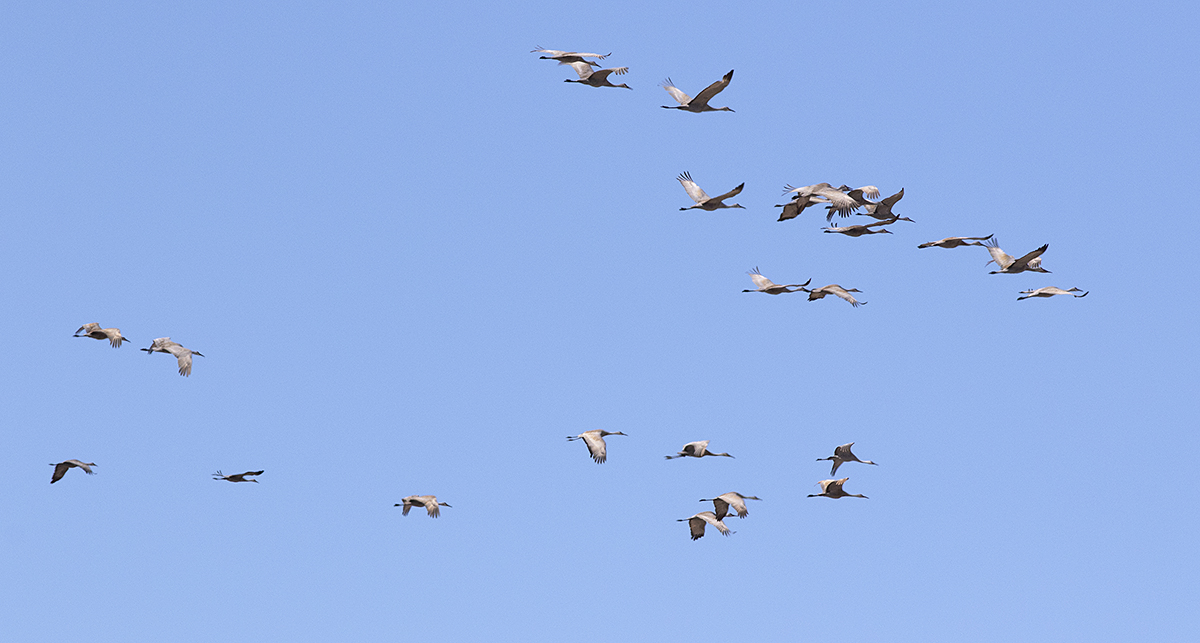 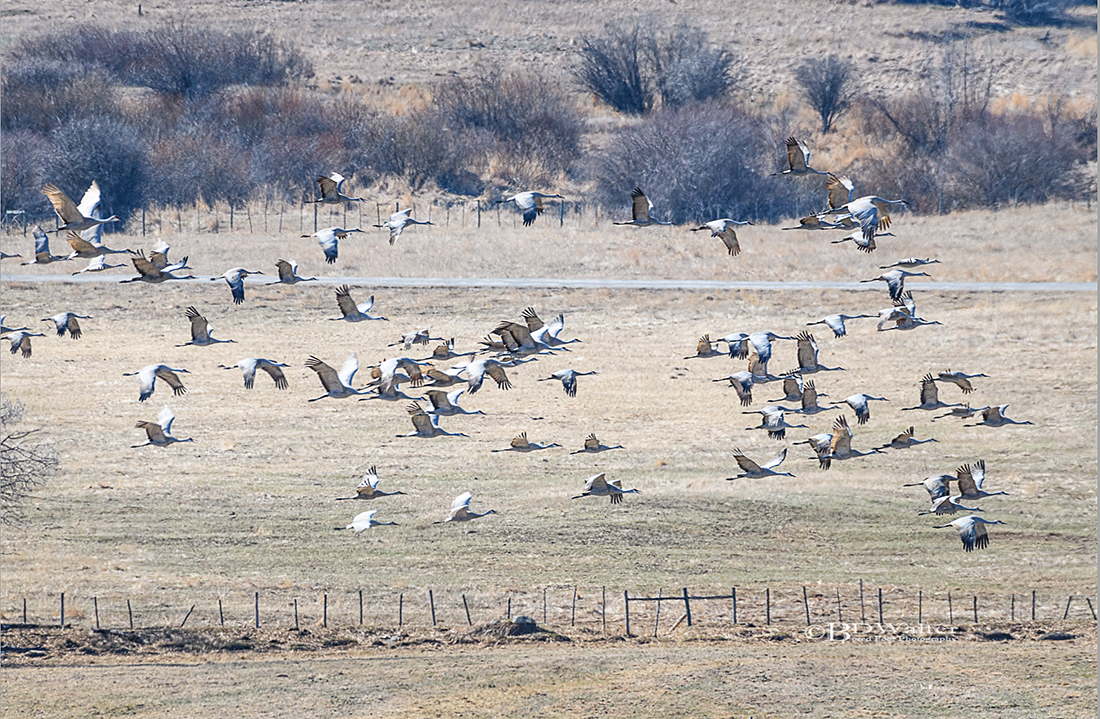 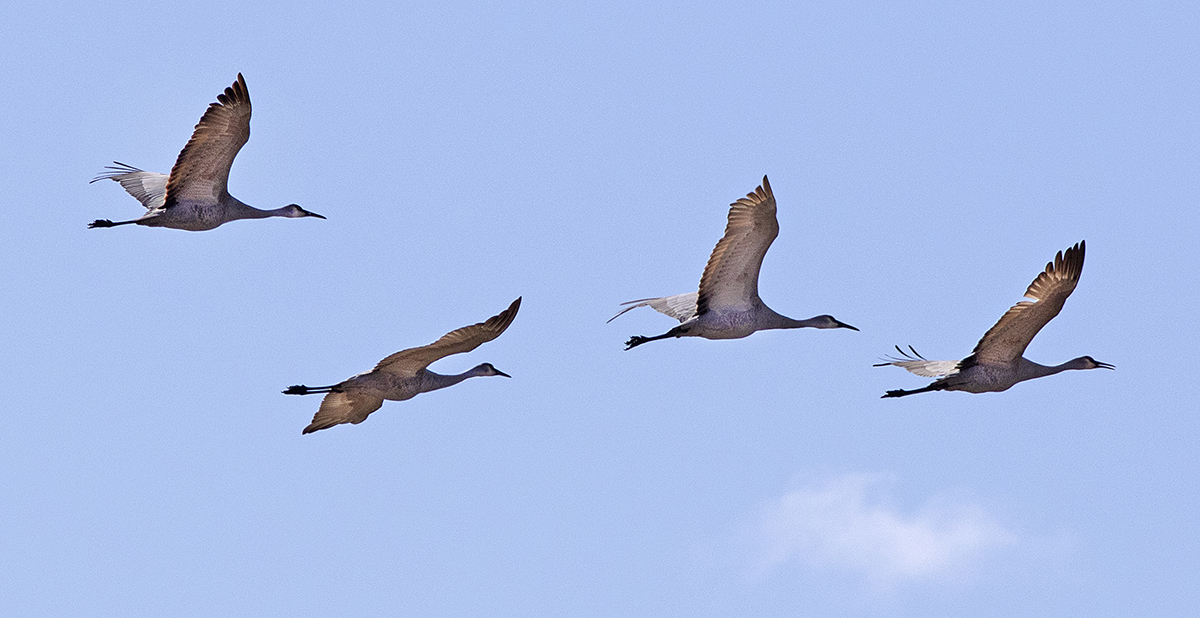 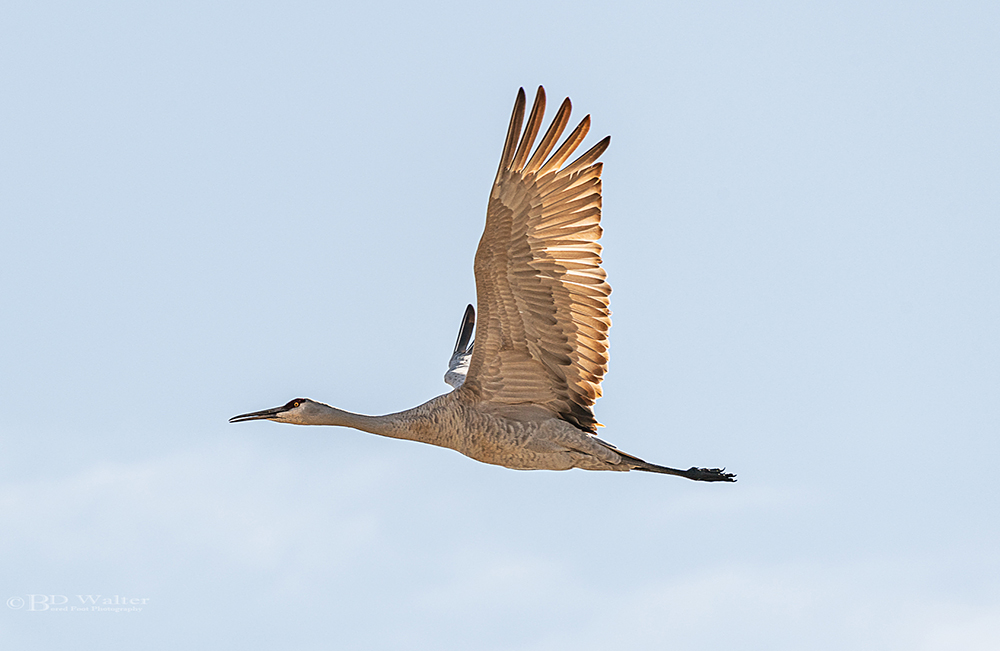 A crisp close-up view of one of the departing Sandhill Cranes. Photo: © Bruce Walter

Besides cranes there were many birds to be seen. 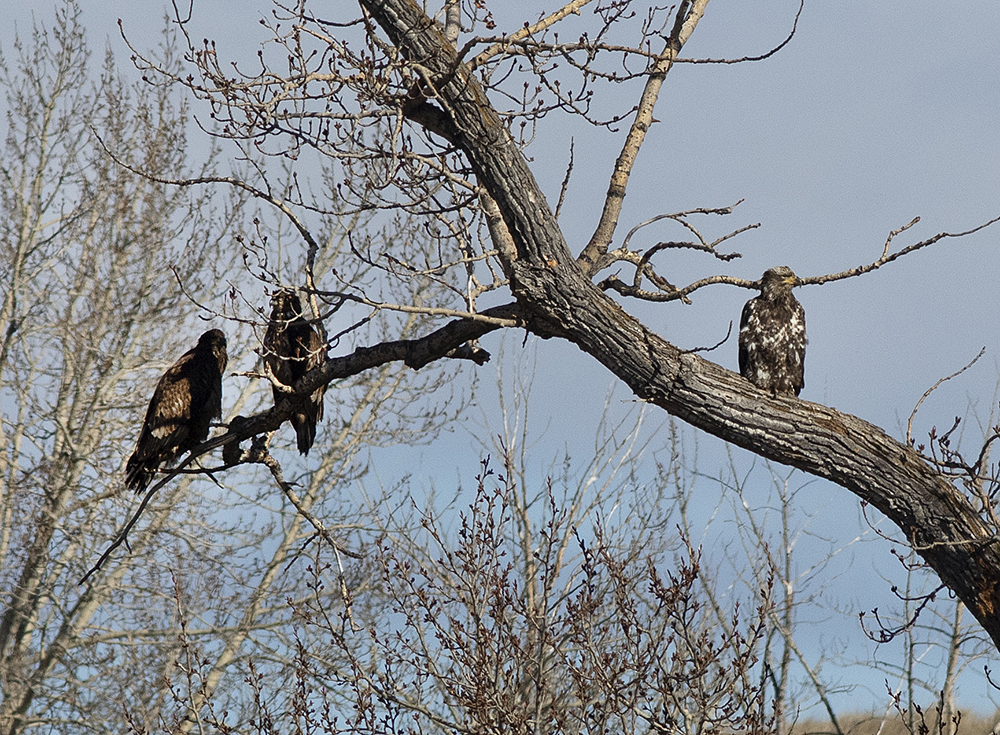 Immature Bald Eagles near Englishman Bridge. Eagles are attracted to the ranch during the spring calving time when cow placentas offer a feast. Photo: © Alan Burger 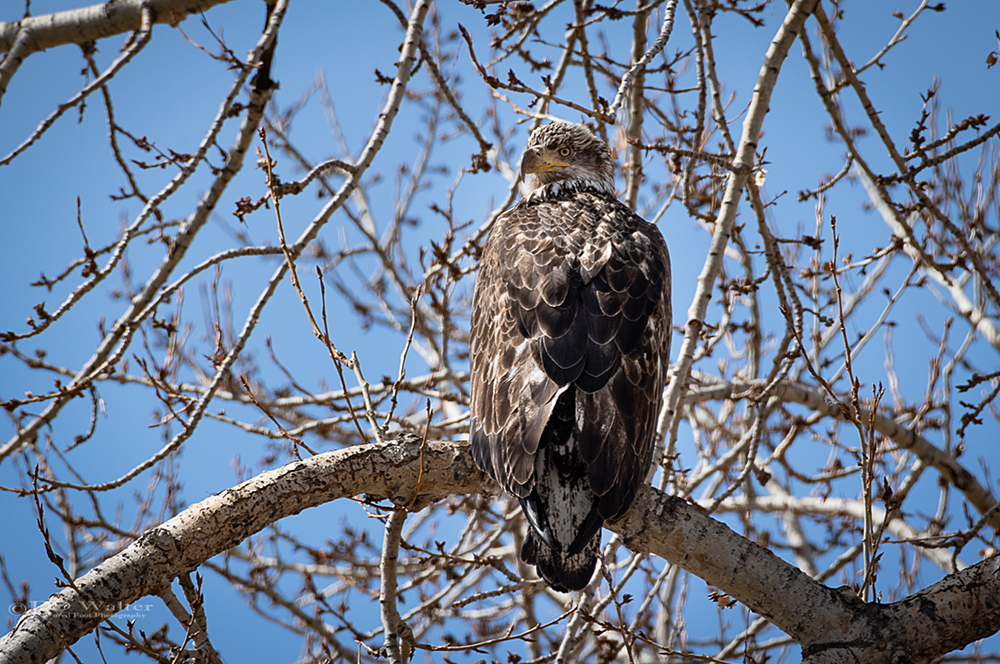 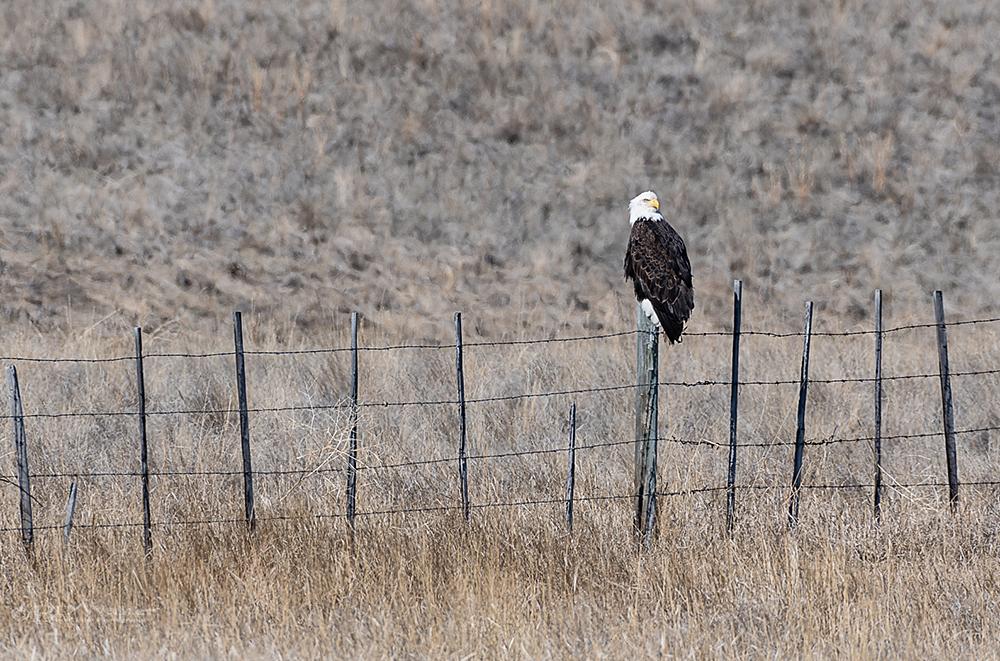 An adult Bald Eagle in the ranchlands. Photo: © Bruce Walter 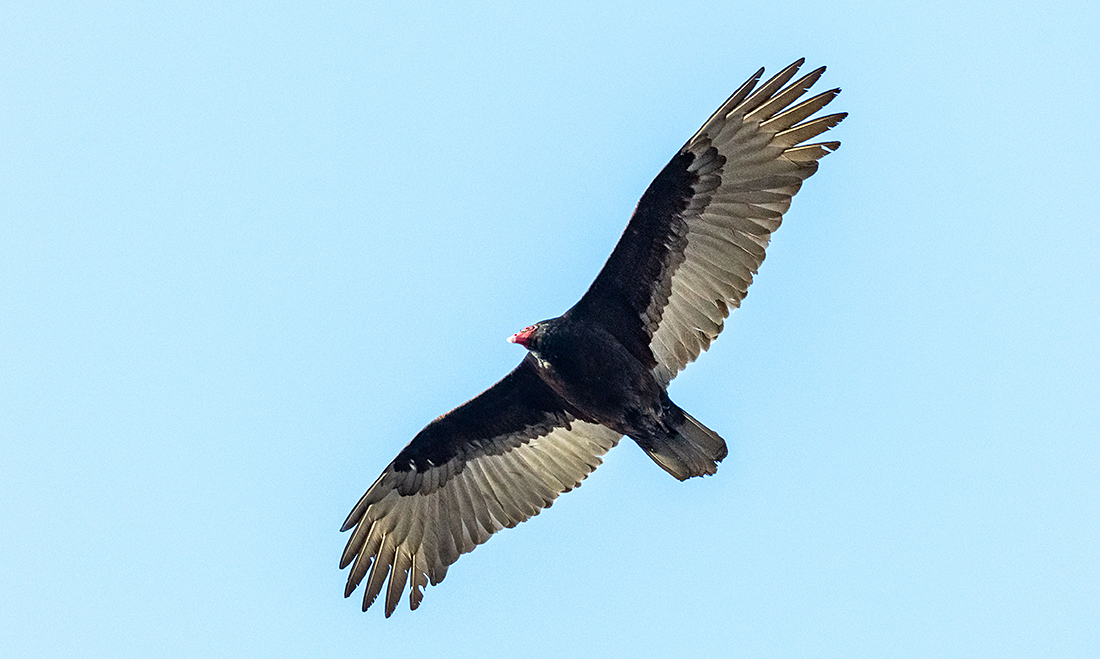 The first Turkey Vultures are just arriving in the Nicola Valley in mid-April. Photo: © Bruce Walter 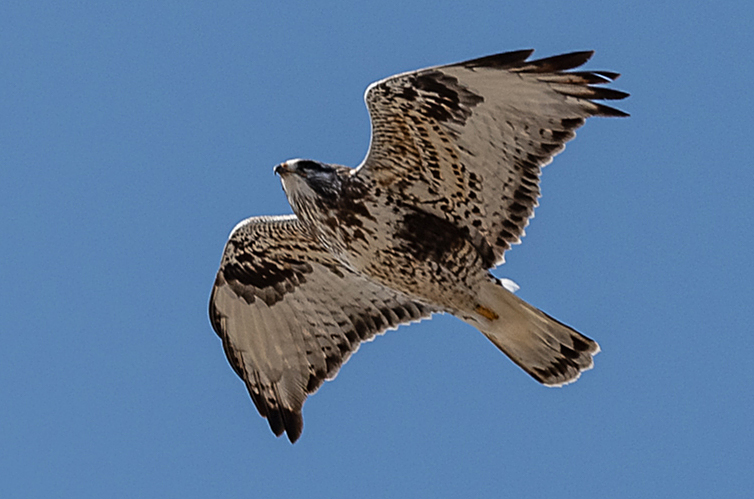 A pale-phase Rough-legged Hawk. As the summer migrants arrive, our winter visitors, such as this species, will be heading north to their arctic breeding areas. Photo: © Bruce Walter

The lakes were loaded with waterfowl of every description – some migrating on their way north and others arriving to breed here.

A much smaller group of Nicola Naturalist members came out on the April 17th expedition, but were well rewarded. Our first group of cranes was somewhat modest – just two birds near Englishman Bridge. But a couple of km further on as we came over the hill we hit the crane bonanza at the usual wetlands site.

Here is a close up of part of this mass: 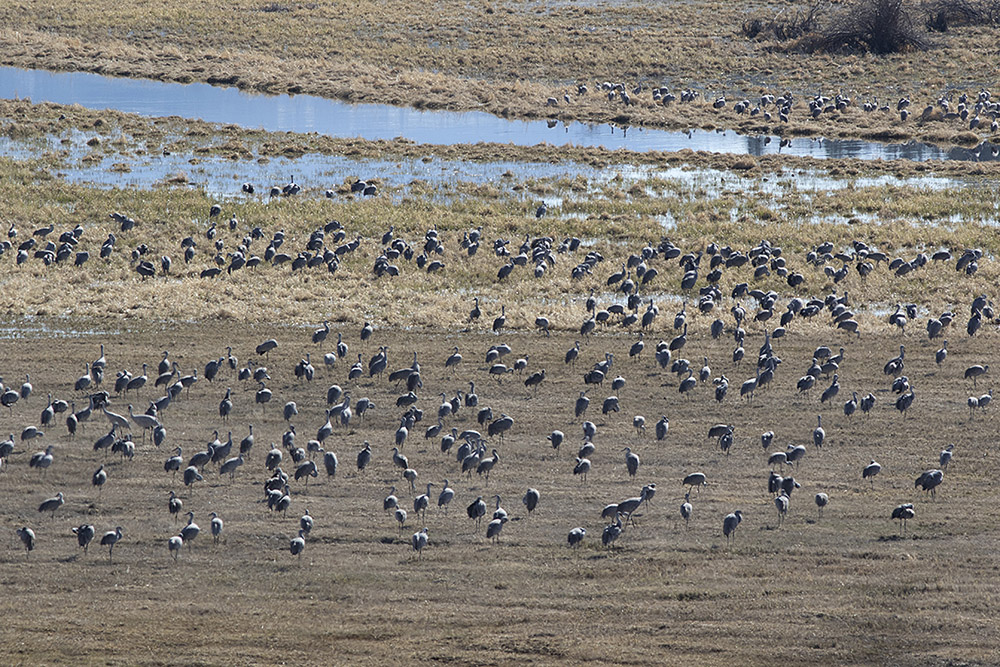 A small section of the big flock of Sandhill Cranes on the wetlands, 17 April 2021. Photo: © Alan Burger

So – how does one count such a large number of birds. The best way is to take a series of photos with a telephoto lens, stitch the photos together and then laboriously count every crane. It helps to divide up the flock into countable sub-sections. This is done with a high resolution photo, too large to show here, but here is a greatly reduced version. (click on the photo to see it enlarged; click on the back arrow to get back here):

In total 1449 cranes were in this photo and another 11 just out of the photo, giving a flock of 1,460 cranes. Shortly after we arrived the cranes started taking off to resume their northward flight. As more and more took off the sky above us was filled with circling, calling cranes – this has to be one of the most spectacular wildlife experiences in southern B.C. No photo can do it justice. These birds will be heading to breeding grounds in northern B.C., Yukon and Alaska. A handful will remain to breed in our area. 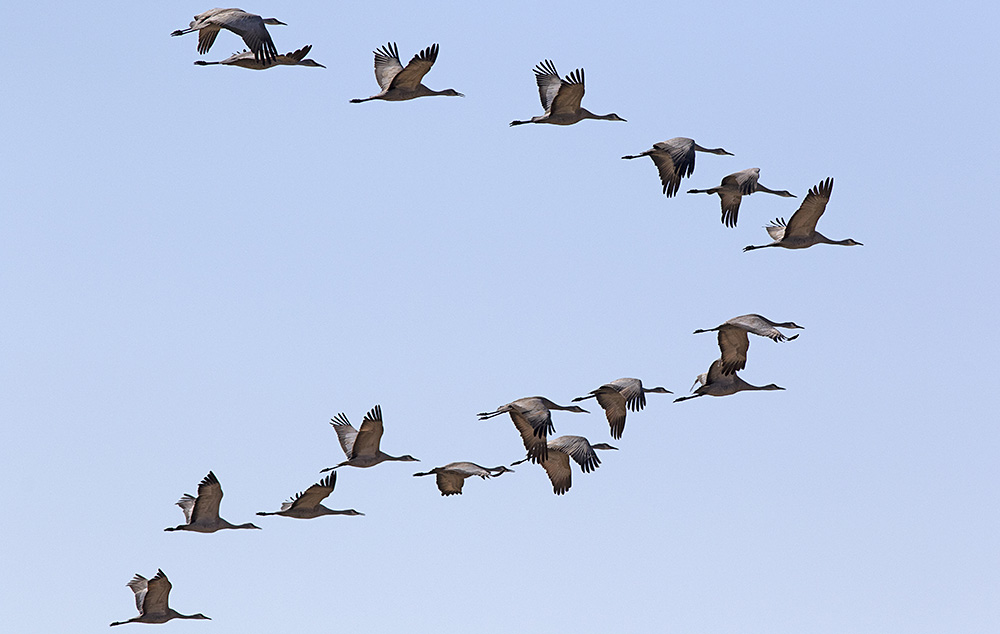 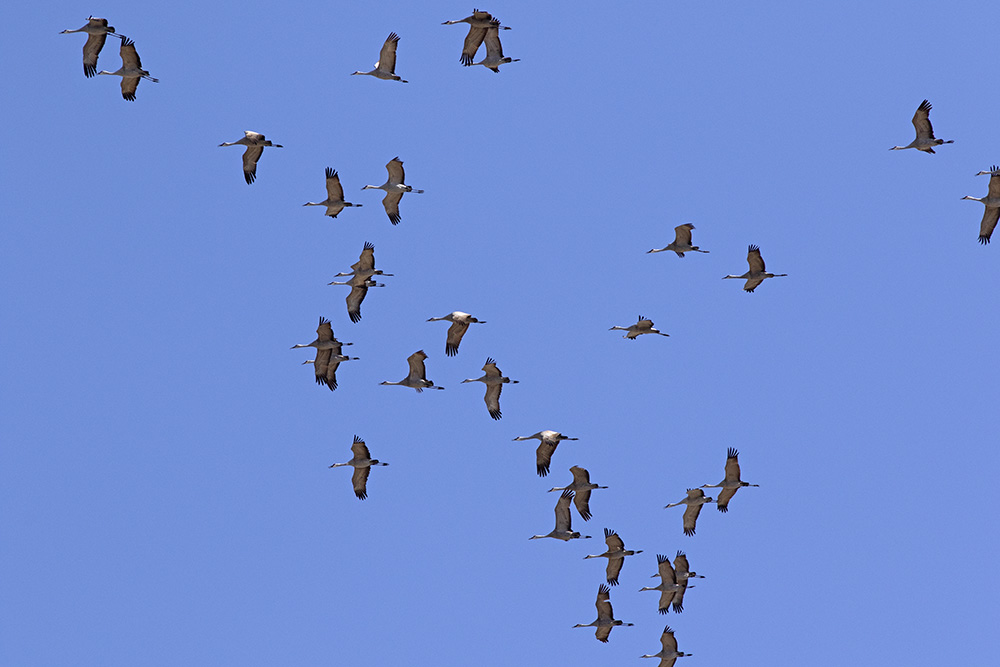 And when we got to Chapperon Lake there were more big flocks of cranes coming over the hills and heading north.

How good is your crowd estimating? How many cranes in this photo? 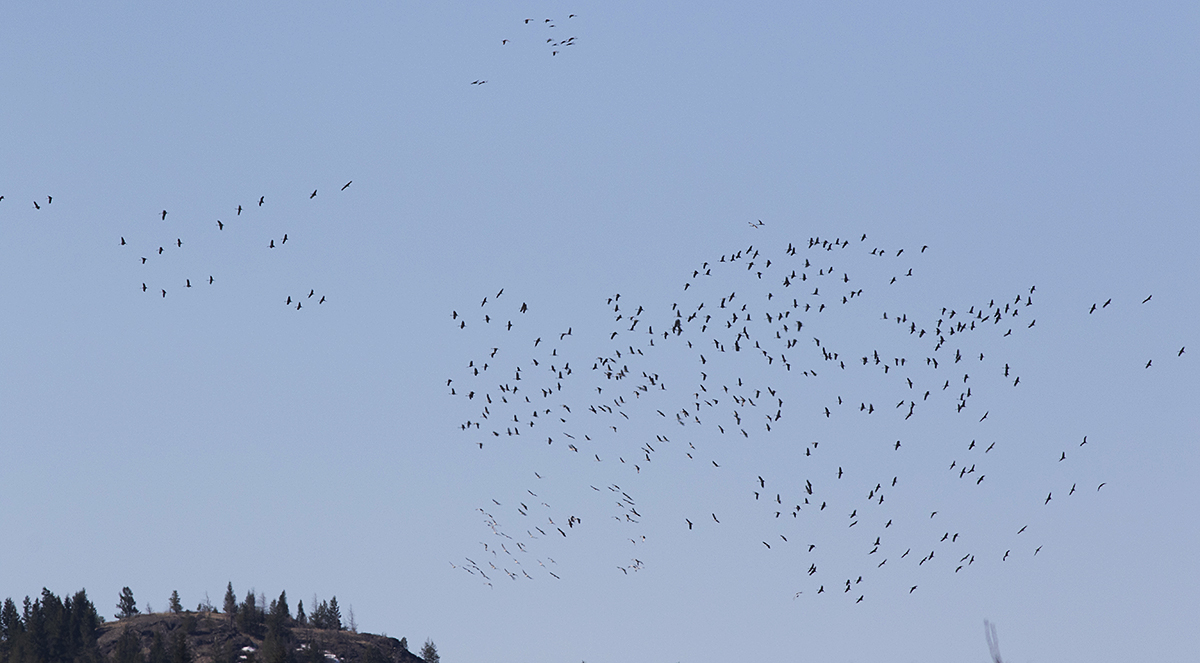 Some of the large flocks of Sandhill Cranes passing Chapperon Lake on 17 April 2021. Photo: © Alan Burger

Using a high-resolution version of this photo, a total of 434 cranes were counted. And other flocks added more. Overall we estimated at least 650 cranes passing Chapperon Lake.

In total we encountered 2,123 Sandhill Cranes on 17 April. It has been estimated that over 25,000 cranes use the Douglas Lake Plateau as a stop-over on their spring migration. These ranchlands are a critical bit of habitat for these magnificent birds.

Once again, on April 17th there were plenty of other birds to see on the grasslands and on the lakes. 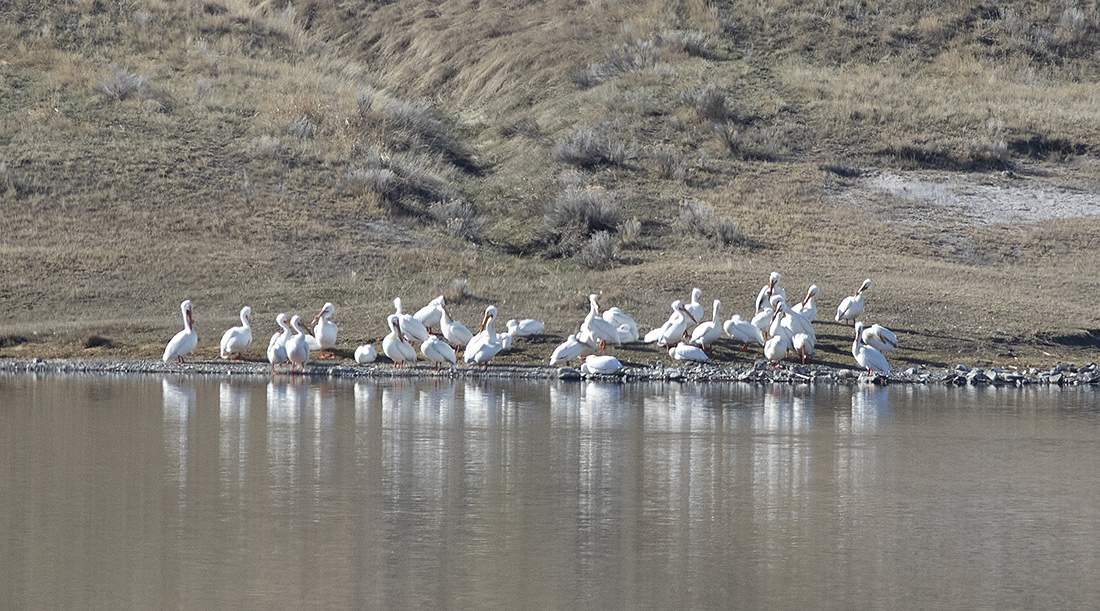 White Pelicans are always a treat to see. On April 17th we found these big birds resting at the pond next to the Douglas Lake Ranch headquarters. These pelicans are probably headed to the only  breeding colony in B.C. – at Stum Lake on the Cariboo Plateau near Williams Lake. Photo: © Alan Burger

A dark-phase Rough-legged Hawk at the Douglas Lake grasslands. These hawks overwinter in our area, but migrate north to the arctic and boreal areas to breed. Photo: © Alan Burger 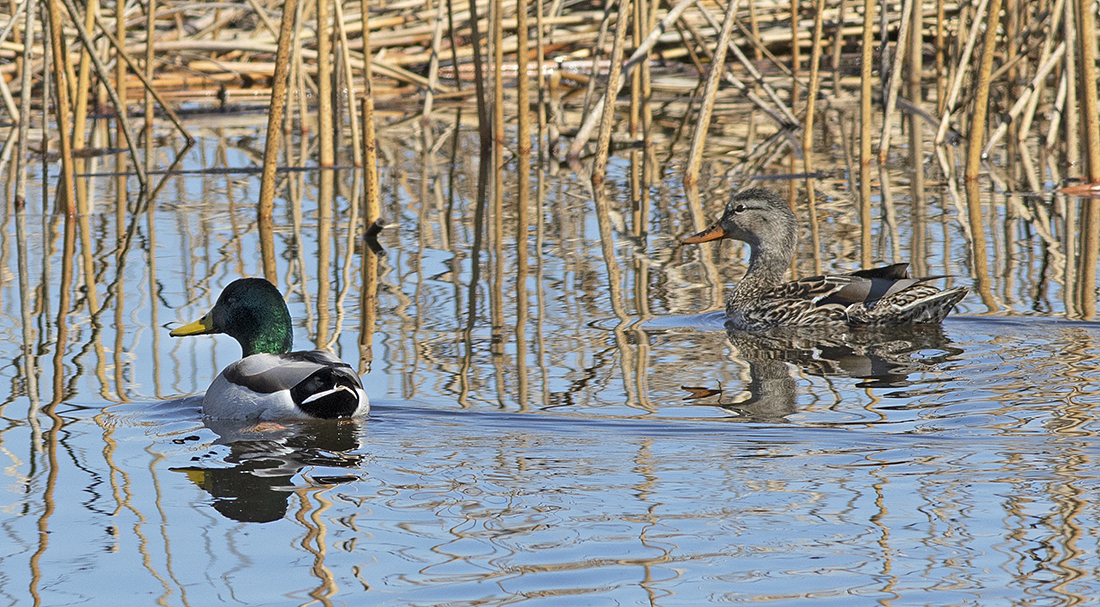 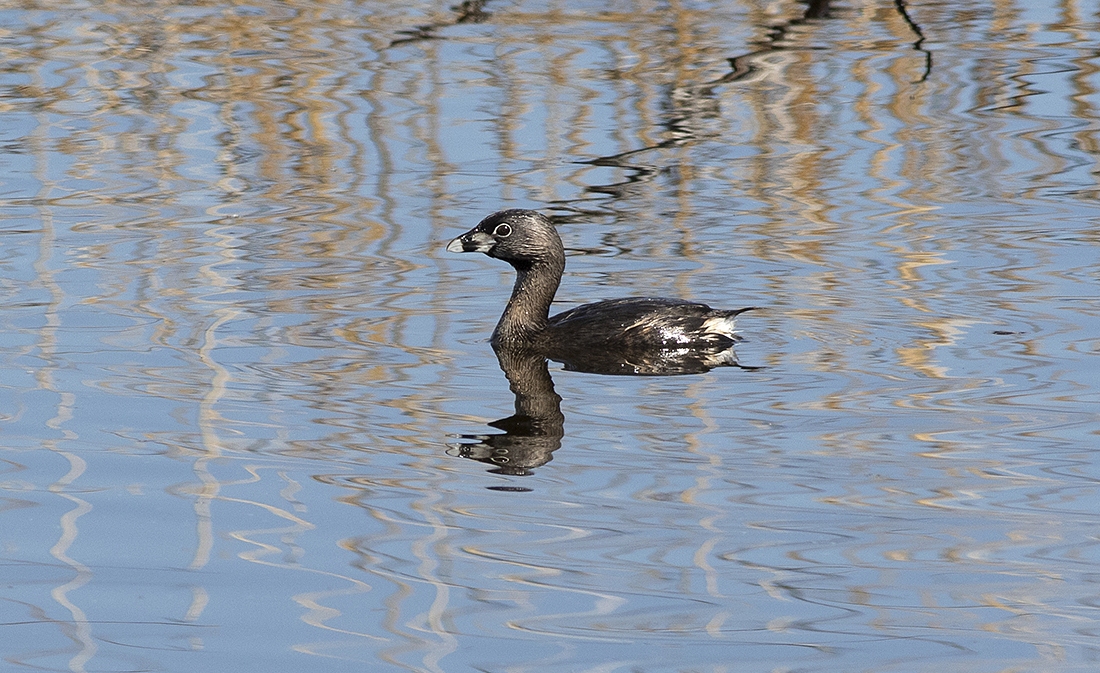 A Pied-billed Grebe on Rush Lake. These little grebes nest in the emergent cat-tails. They feed on small fish and aquatic insects. Photo: © Alan Burger

This entry was posted in Features, Past meetings, Photos, Projects, Uncategorized. Bookmark the permalink.