As explained elsewhere the Amphibian Monitoring section of our website, the Nicola Naturalist Society in collaboration with BC Parks and the professional herpetologists of Biolinx Environmental Research have been undertaking a multi-year project at Kentucky-Alleyne Provincial Park near Merritt. Our report for 2014, prepared by the Biolinx biologists, has now been released and you can download it by clicking here (1.1 MB): K-A Toad Report, 15 Dec 2014

Briefly, in 2012 our amphibian monitoring showed that thousands of tiny Western Toad metamorphs, just leaving their natal pond, were being killed on the camp roads at Kentucky-Alleyne Provinical Park in late July – early August. In 2013 BC Parks installed an underpass at the location where most toadlets were crossing the road and we installed a temporary fence/funnel to direct the toadlets safely through the underpass. In 2014 we built a more permanent funnel/fence out of wood and we monitored how effective this was. The details of the fence are in our report, and you can see how we built the fence elsewhere on this website (click here): Building the 2014 toadlet fence 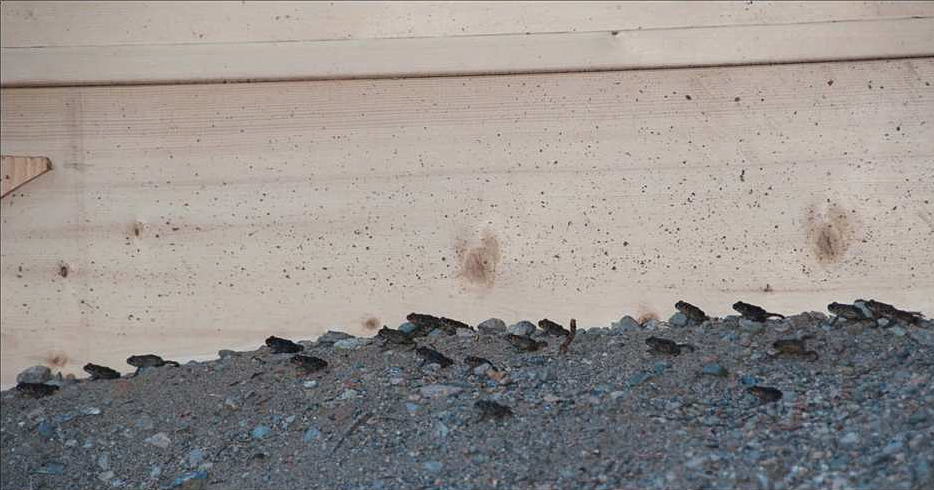 Tiny toadlets move along the wooden funnel/fence to direct them safely through the road underpass at Kentucky-Alleyne Provincial Park. Photo: © Kristiina Ovaska

The report analyses the movements and mortality of the toadlets and shows that the funnel/fence is effective at directing the tiny toadlets safely under the road on their way to the forest. Small numbers of the toadlets are still moving into the campsite area to the east of the fence and some of these are still being run over by vehicles. The following diagram taken from the report nicely summarizes the movements of the toadlets in 2014 and the places where some were still being killed by vehicles. For a full description please download the report at the link above. 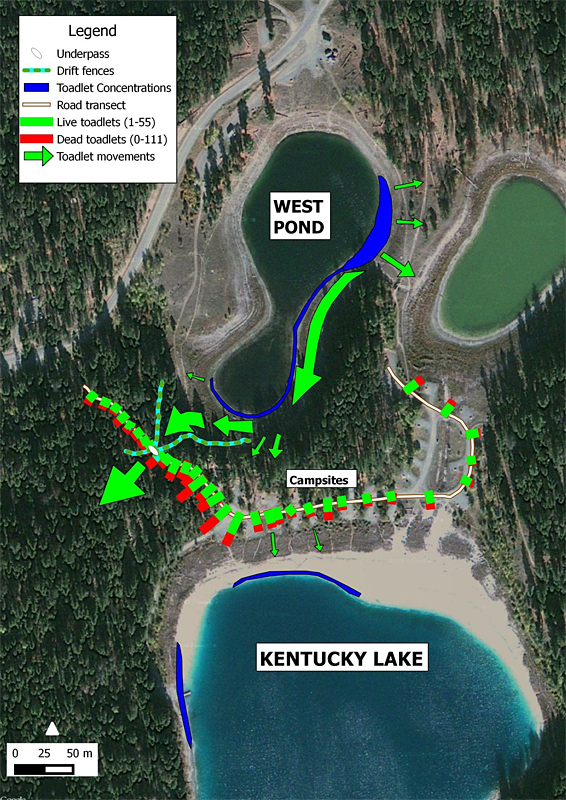 Map showing the movements of Western Toad toadlets in 2014 at Kentucky Alleyne Provincial Park and the distribution of live and dead toadlets on the camp roads. © Biolinx Environmental Research Ltd.