This has been an active and rewarding summer for the amphibian monitoring project being run jointly by the Nicola Naturalist Society and Biolinx Environmental Research Ltd. After our initial training workshop and field training sessions, about 20 NNS volunteers signed up to contribute to the monitoring of breeding frogs in the greater Nicola Valley area. 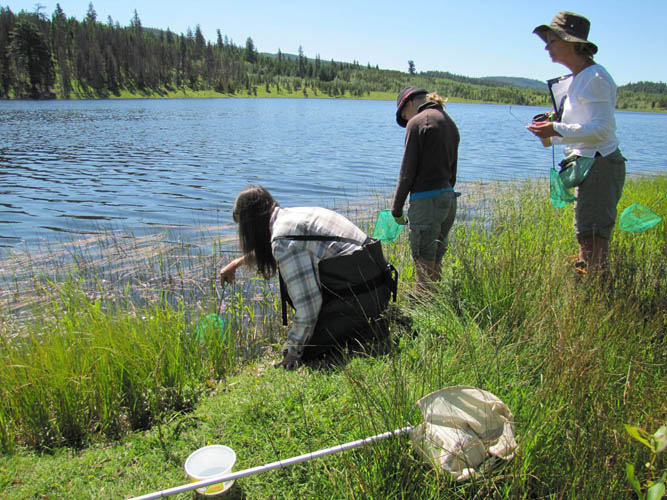 The Biolinx team (Kristiina Ovaska, Lennart Sopuck and Christian Engelstoft) visited on 3-6 June and NNS vounteers joined them to check  numerous wetlands and lakes for amphibians. Clear skies and gorgeous weather prevailed, making the surveys very pleasant. Paul McLellan from ShawTV joined the group to prepare a short documentary on the project to be shown on Shaw channel 10. 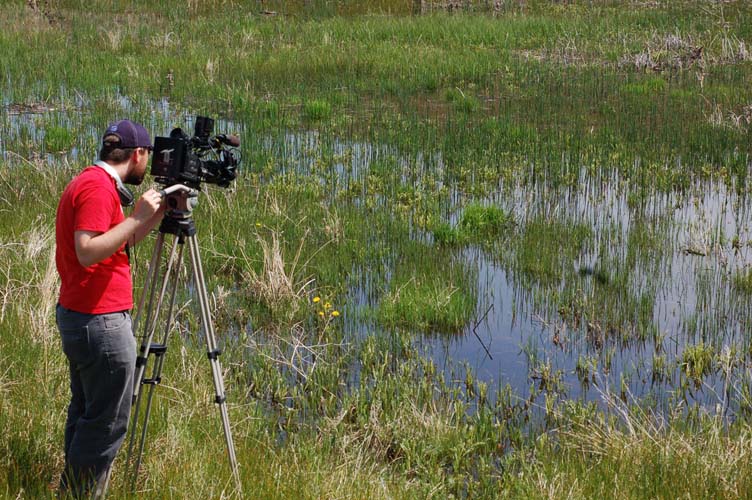 Over the weekend, we found several mass breeding sites of Western Toads, mostly due to tips from NNS members  – the water in the shallows was virtually “boiling” with the wriggling of the small, black tadpoles at these sites. We also saw several Columbia Spotted Frogs basking in the weeds at new sites, Long-toed Salamanders on the verge of emerging from eggs, and Spadefoot tadpoles with their distinct close-set eyes and metallic sheen in grassland pools. Check out new photos on the NNS website 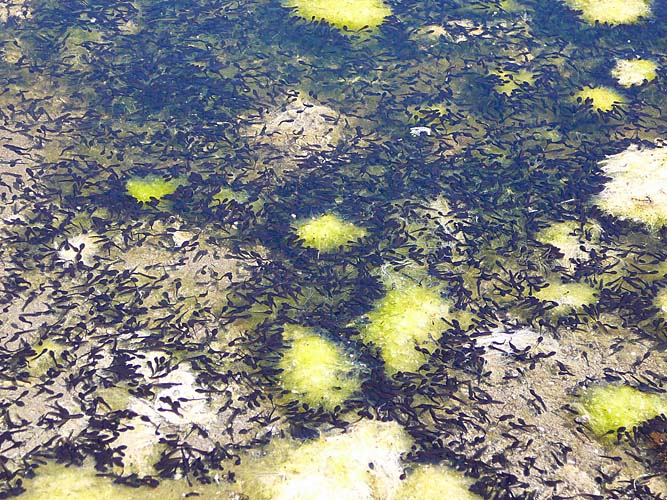 On night drives we heard the Pacific Chorus Frogs and Spadefoots still calling, indicating that egg-laying might still be ongoing in early June, but the breeding season nearing its end. 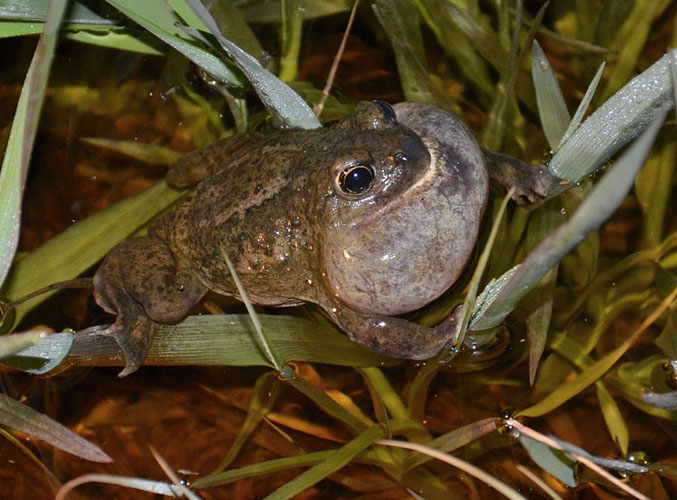 The Biolinx team returned on 4-7 July for another action-packed 3 days of frogging with our keen NNS volunteers.  We set 28 “minnow traps” in the shoreline reeds in some of the Kane Valley Lakes and checked them in the day using both kayaks and hip waders. It’s all “catch and release” – we just wanted to examine the development stages of the tadpoles and see what species are present. 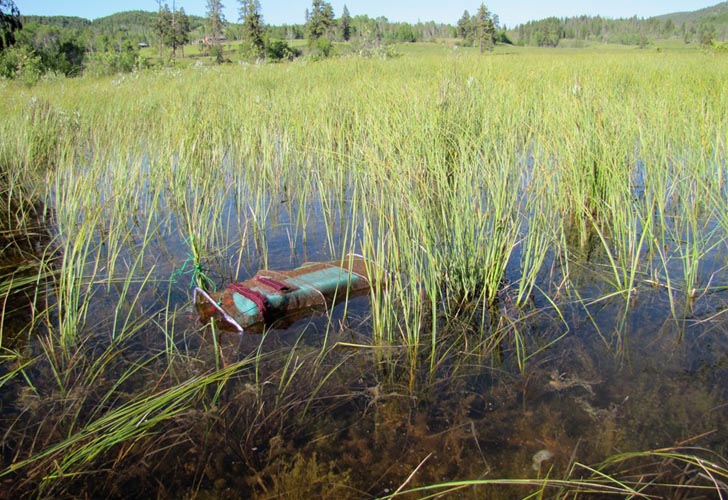 A minnow trap set in the shallows to sample tadpoles. Photo: Kristiina Ovaska

We caught all 3 types of expected tadpoles: Pacific Chorus Frogs (tree frogs) – small brown tadpoles; Columbia Spotted Frogs – the largest tadpoles, some with front feet developing; and the Western Toad tadpoles – small black ones in dense clusters and “flowing rivers” of hundreds of swimming tadpoles. In places they were in feeding frenzies on floating algae. 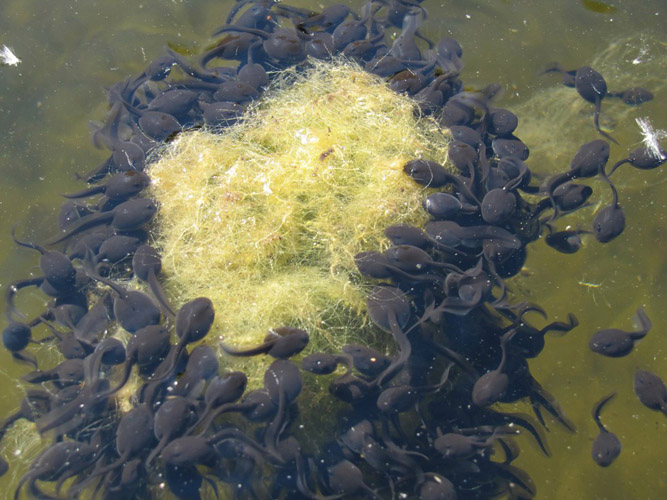 Christian and Lennart got some amazing videos of a Western Garter Snake in the middle of a cluster of toad tadpoles, attacking and eating its fill of these tadpoles. Click on the start button below to run the video within this page OR click here to open the Garter Snake attacking tadpoles video in a separate page.

Speaking of snakes, we also found three garter snakes that had swum into our minnow traps, both Common (green stripes) and Western (brown with black spots) Garter Snakes. The traps also captured water beetles, leeches, snails and dragon fly larvae. Only one trap caught quite a few minnows and some traps were empty. In two places we found Columbia Spotted frogs sunning themselves on top of our floating traps! 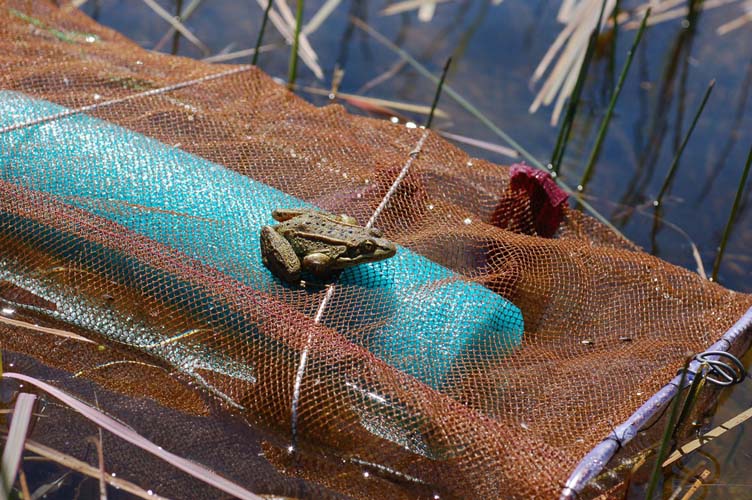 We follow a strict protocol of cleaning and sterilizing all our traps and nets, once we have released all the captives, to prevent the chance of spreading diseases from one water body to another.

Individual volunteers continue to do reconnaissance trips to look for frogs, tadpoles and salamanders at local ponds and lakes, and check the progress of developing tadpoles. We are particularly keen to know when and where the Western Toad toadlets emerge from lakes in the Merritt area – usually by the hundreds or thousands. Please report any sightings of tadpoles and emerging toadlets to our Amphibian Project e-mail: nicola.amphibians@gmail.com.

Click here to see more photos of the amphibian monitoring.

Below are two more videos made by the Biolinx biologists from the work in the Merritt area.

Great Basin Spadefoot tadpoles feeding in a shallow grassland marsh – these large spadefoot tadpoles are in water with low oxygen content so they need to come to the surface to gulp some air in between feeding.