As the COVID restrictions continue, the Nicola Naturalist Society is having no evening meetings. Instead we are posting local nature photos and stories provided by our members, which we normally share at our evening meetings as “Nature News”. Here is the latest batch – nicely demonstrating the diversity of our wildlife, even in winter.

We’ve had our share of stormy weather, so it is appropriate to begin with a dramatic photo of a rapidly approaching storm. 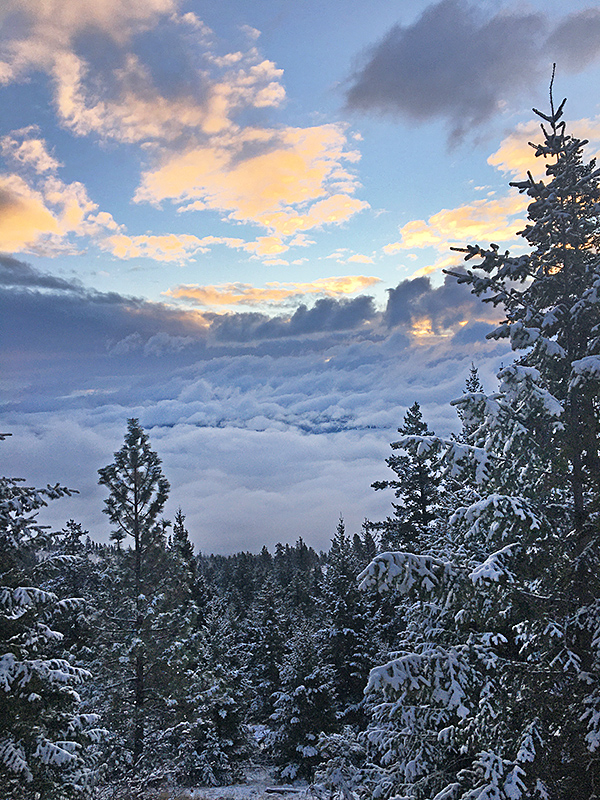 It seems a bit early for birds to begin any courtship or territorial displays, but Anne Pang looked out of her window in early January and this is what she reports:

“Grouse hunt! It is truly a lesson in patience with no better teacher than the grouse itself. We spotted from the window, this spectacular display that the bird put on while just walking from one end of the yard to the bushes.  The blurry pictures were taken from the window and at some distance.”

Displays by a Ruffed Grouse as seen through the window. You can easily see where the name “Ruffed” Grouse comes from. Photos: © Anne Pang

Anne continues:  “Then hoping for a better picture, I dashed outside and crept up upon it but it kept well within the bushes and brambles. I stood as still as possible and waited for an interminable time till the cold got to me and I gave up!” 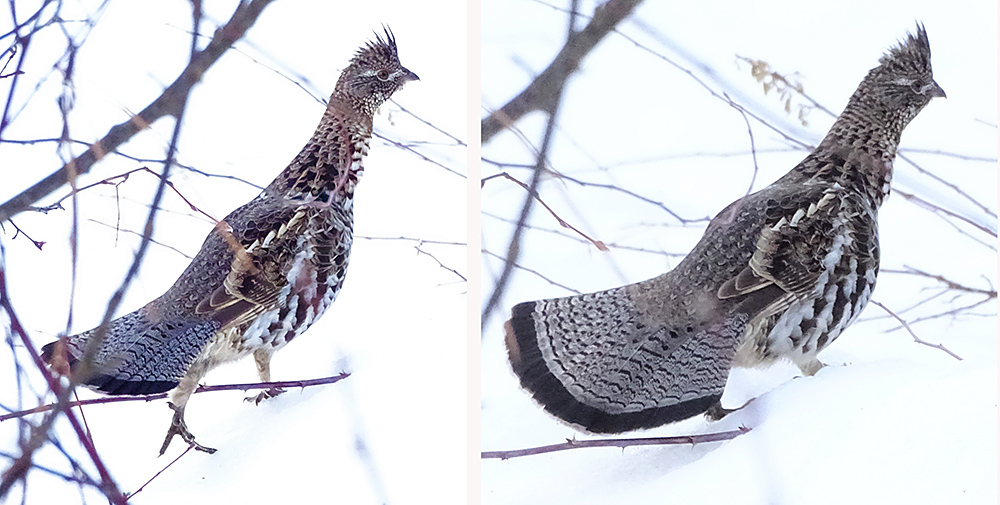 Photos of the same Ruffed Grouse that was displaying. Photos: © Anne Pang

Why would a grouse display in the mid-winter snow? One guess is that this is a male starting to get a touch of testosterone and practising for the spring. It probably takes some skills to woo the lady grouse so never too early to start practising.

Another relative of the grouse recently seen: 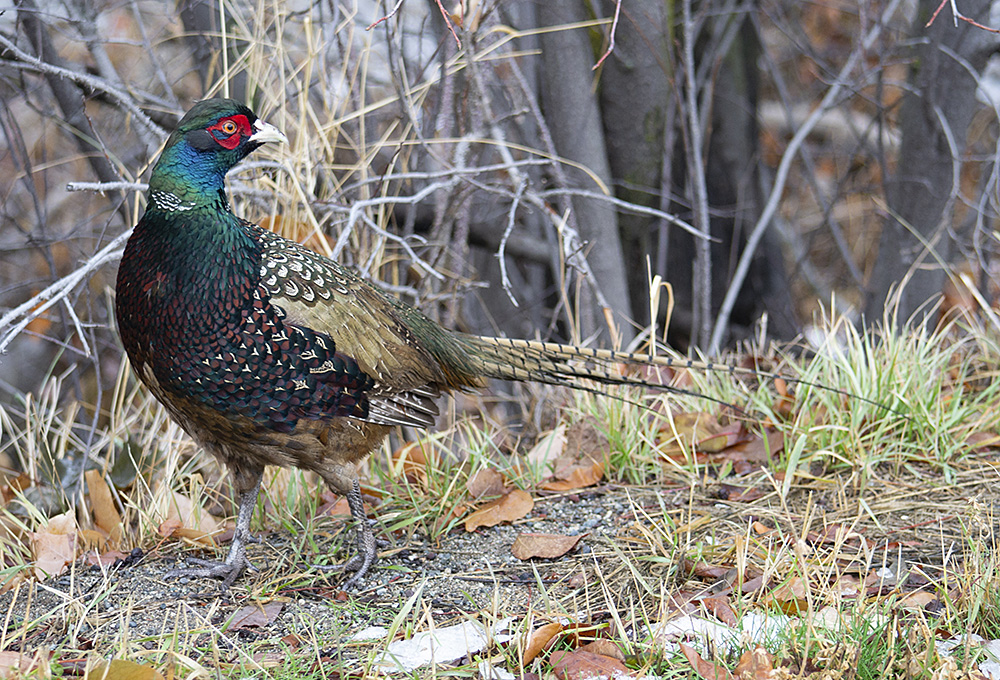 A beautiful male Ring-necked Pheasant found in our area. This is an introduced Asian species but is often bred and released by game-bird hunters. Photo: © Paul Willms

In winter we get several bird species visiting us from their summer breeding grounds way up north – in the boreal forest or even in the Arctic tundra. That makes for some interesting winter birding. Here are a few of these species. 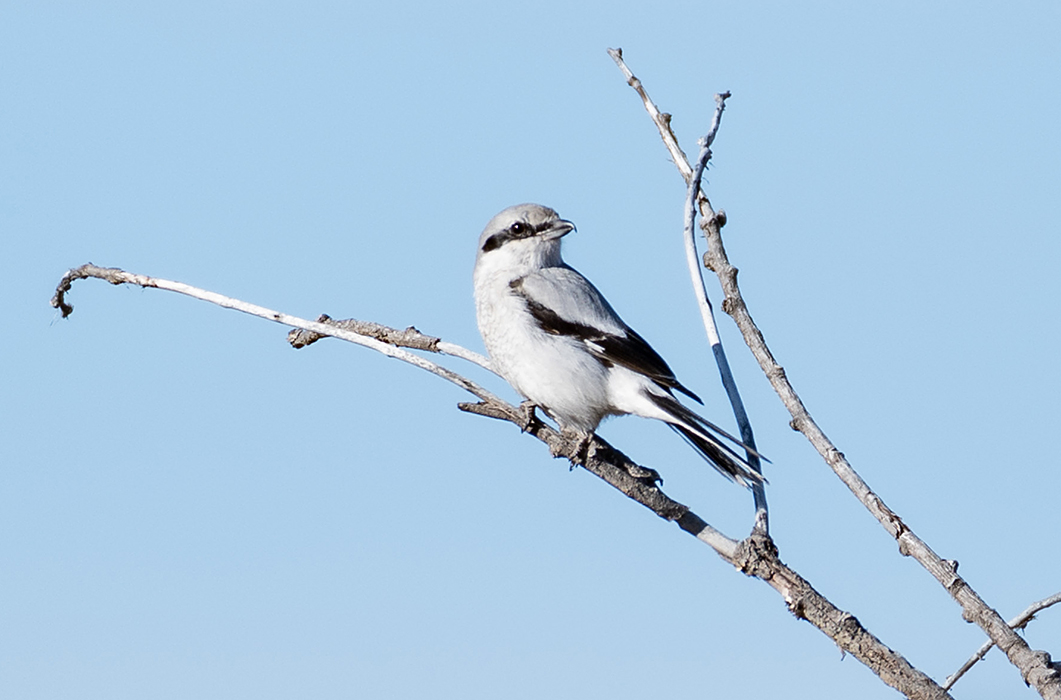 It seems like a good winter in 2020-21 for Northern Shrikes. Several have been seen in local Christmas Bird Counts. These tough little birds catch small birds and mice. Photo: © Bruce Walter 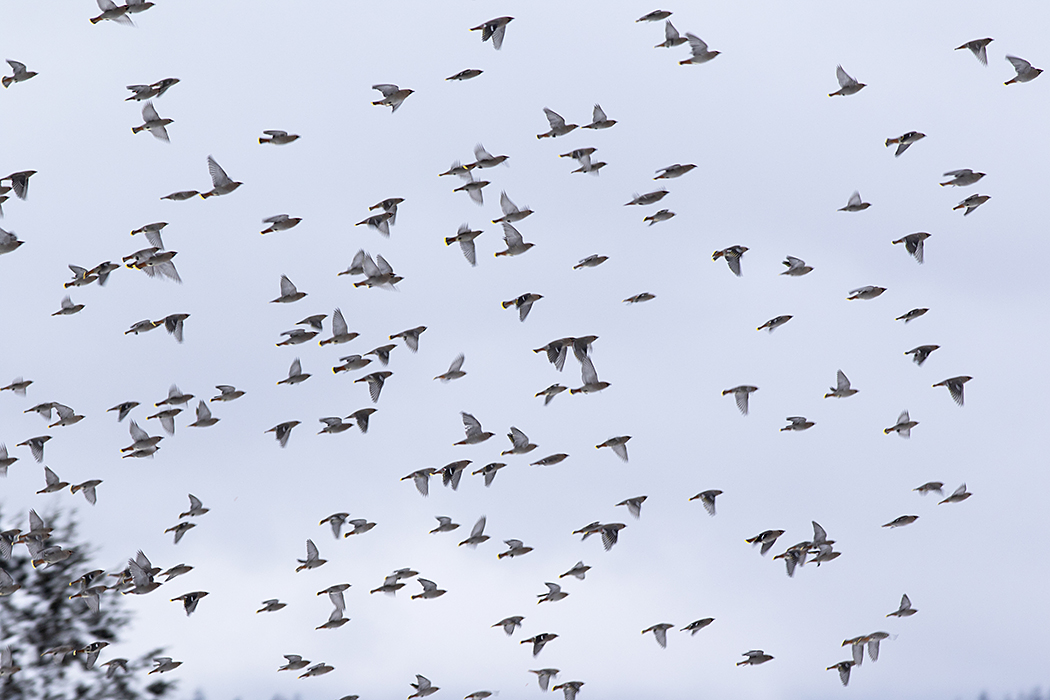 In winter we sometimes get flocks of hundreds of Bohemian Waxwings. These winter visitors love Mountain Ash and other berries but once they strip an area of berries the whole flock moves on. Photo: © Alan Burger 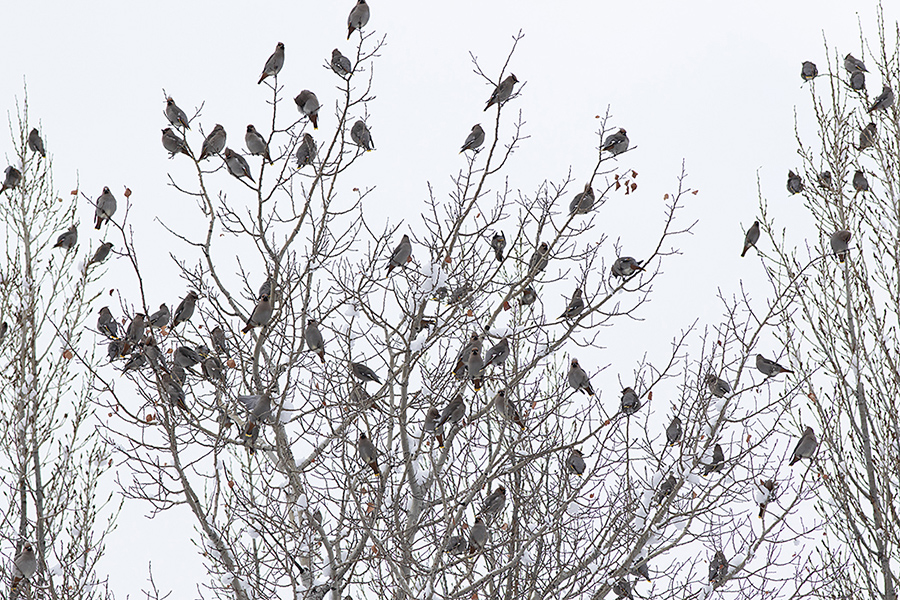 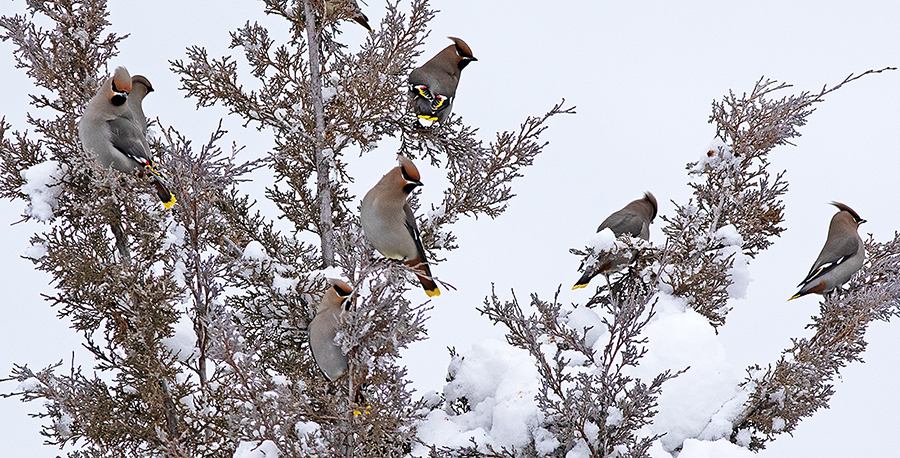 A closer view of Bohemian Waxwings. These birds visit us in winter and are very similar to the Cedar Waxwings that we see in summer and that breed here. The Bohemians breed in the far northern boreal regions. Photo: © Alan Burger 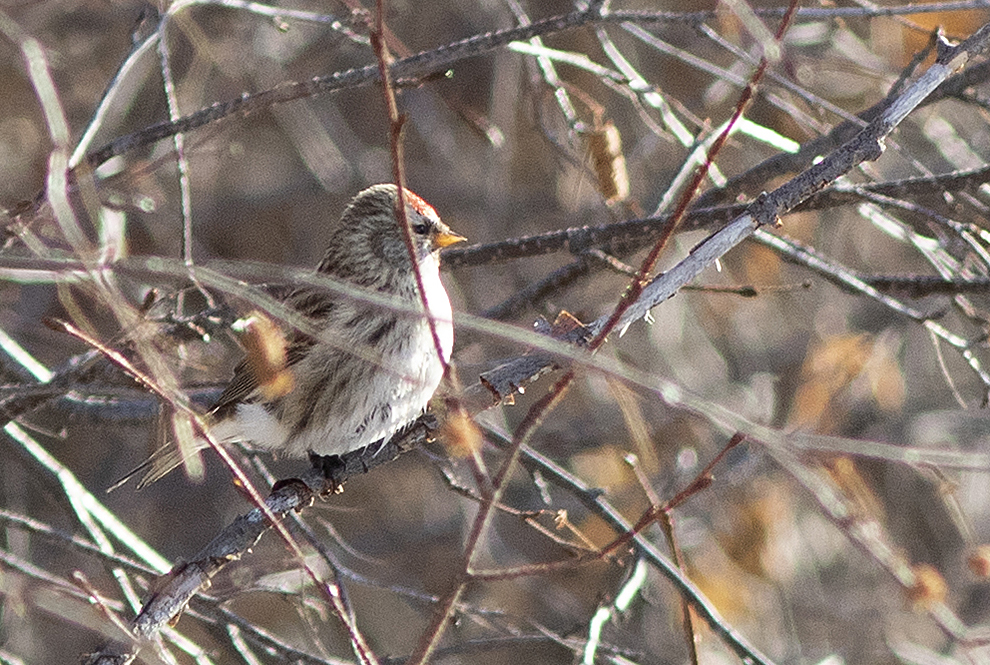 A Common Redpoll (notice the red forehead). This tiny finch is another winter visitor to our area, but is a very fickle traveler. Sometimes years go by when we don’t see any, but a few have been reported in the 2020-21 winter in our area. This photo was taken in early January 2021 near the Quilchena Hotel. Photo: © Alan Burger.

Sightings of wintering waterfowl in our area are very dependent on whether the lakes are frozen over. Nicola Lake has been largely open through December and early January this winter and yielded big counts of ducks, geese and swans in the Merritt Christmas Bird Count. Other lakes are mostly frozen over. But waterfowl sometimes persist in our rivers and running streams. 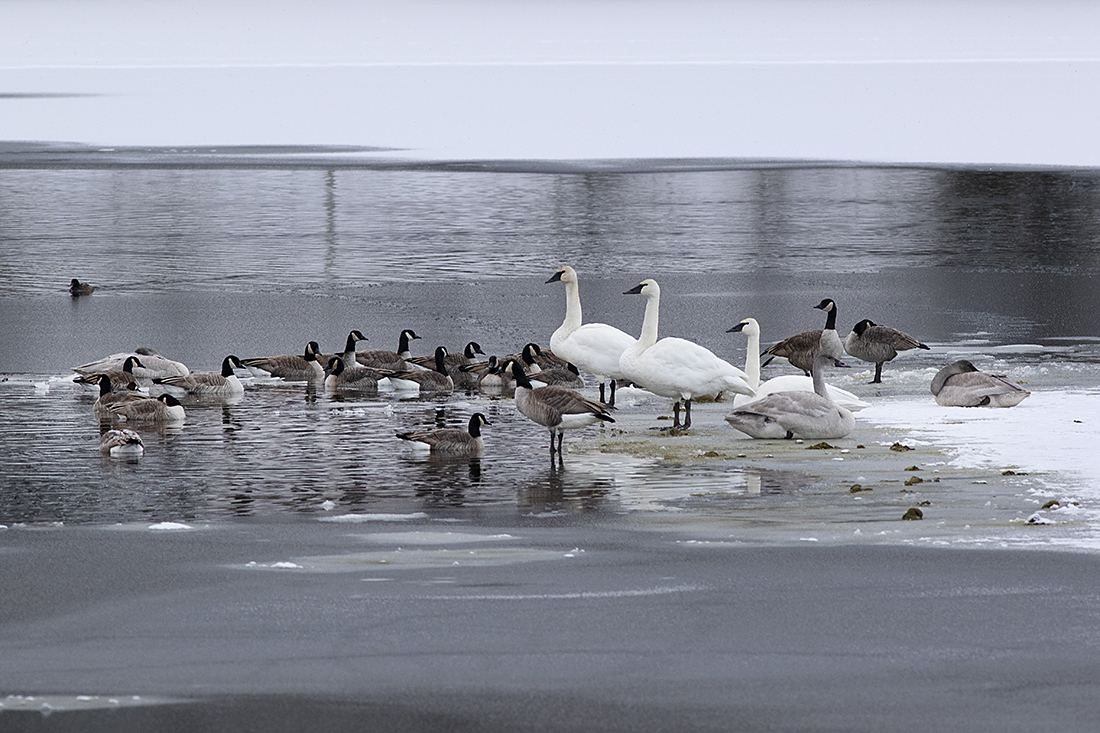 As Logan Lake freezes over in December the waterfowl crowd together in the remaining open water – until that too freezes over and they all leave. Here are Canada Geese, Trumpeter Swans and a lone Lesser Scaup. Photo: © Alan Burger 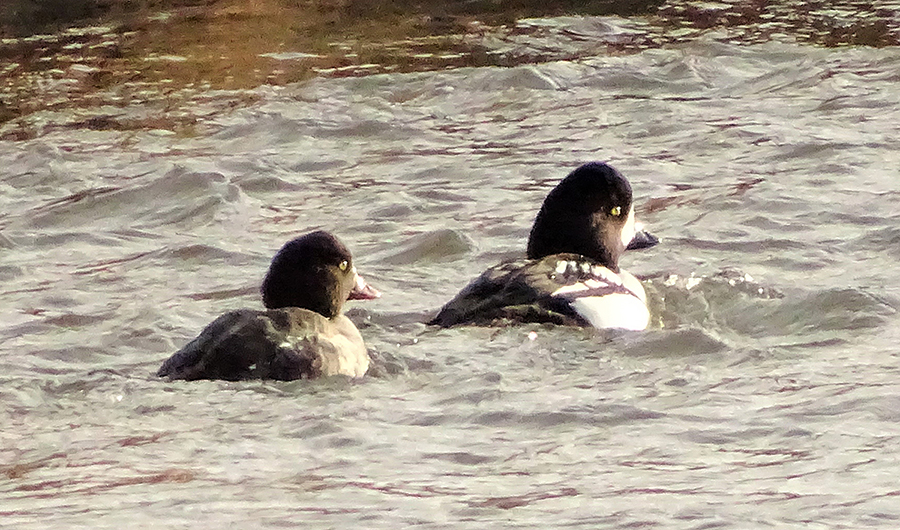 A pair of Barrow’s Goldeneyes – male on the right. These little ducks can often be found in swiftly running streams, like the Nicola River. Photo: © Anne Pang

A neat little parade of Hooded Mergansers along the ice edge – three males and one female. Photo: © Vic Newton 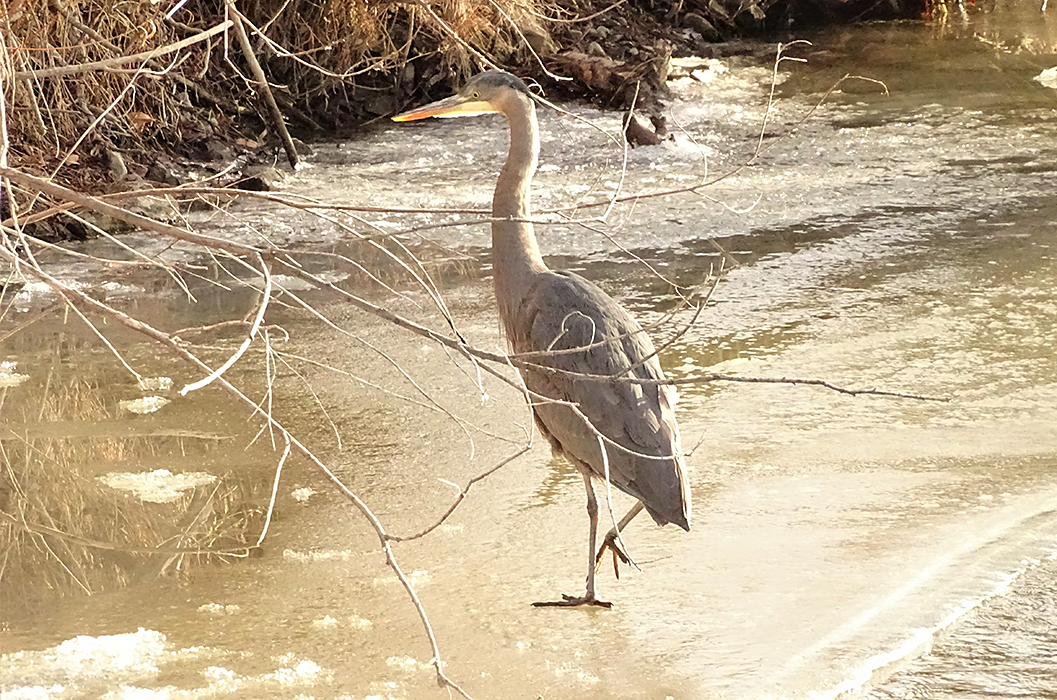 A Great Blue Heron on the ice bordering the Nicola River. In winter these herons will often use ice as a platform to hunt for fish. Photo: © Anne Pang

Time for some mammals ….. 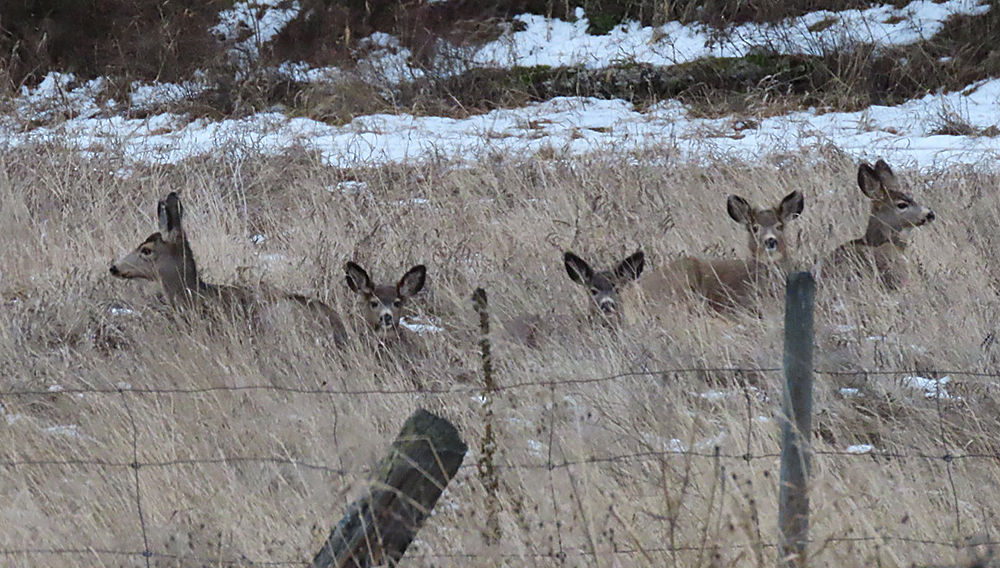 And where there are deer there are predators. Vic got these photos of multiple cougar tracks at an undisclosed location in our area. 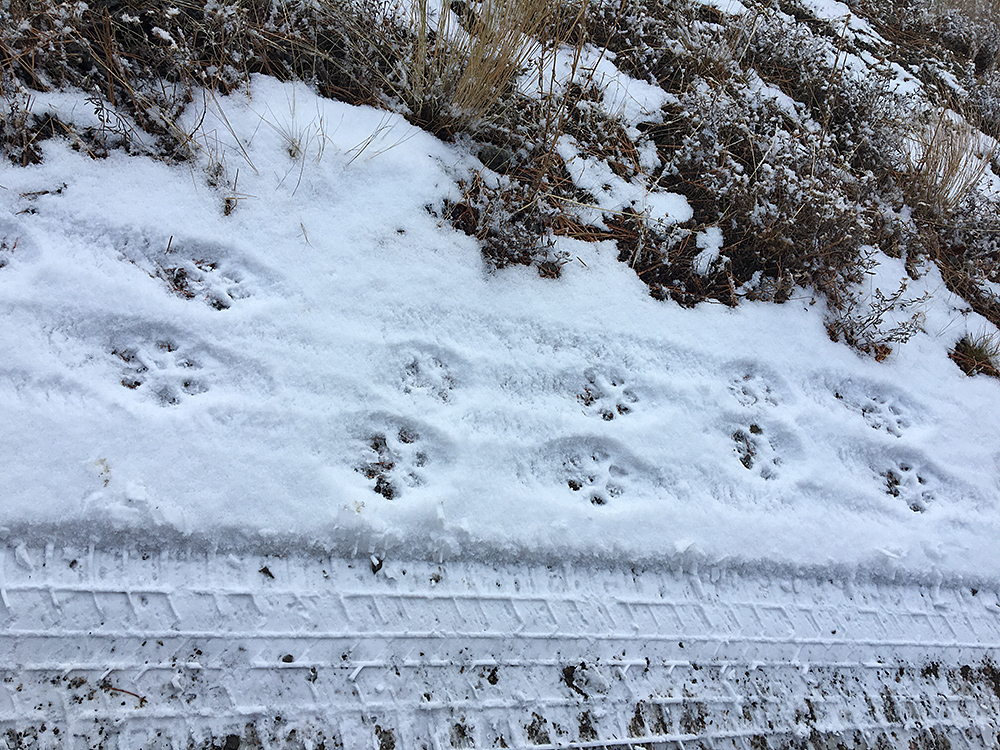 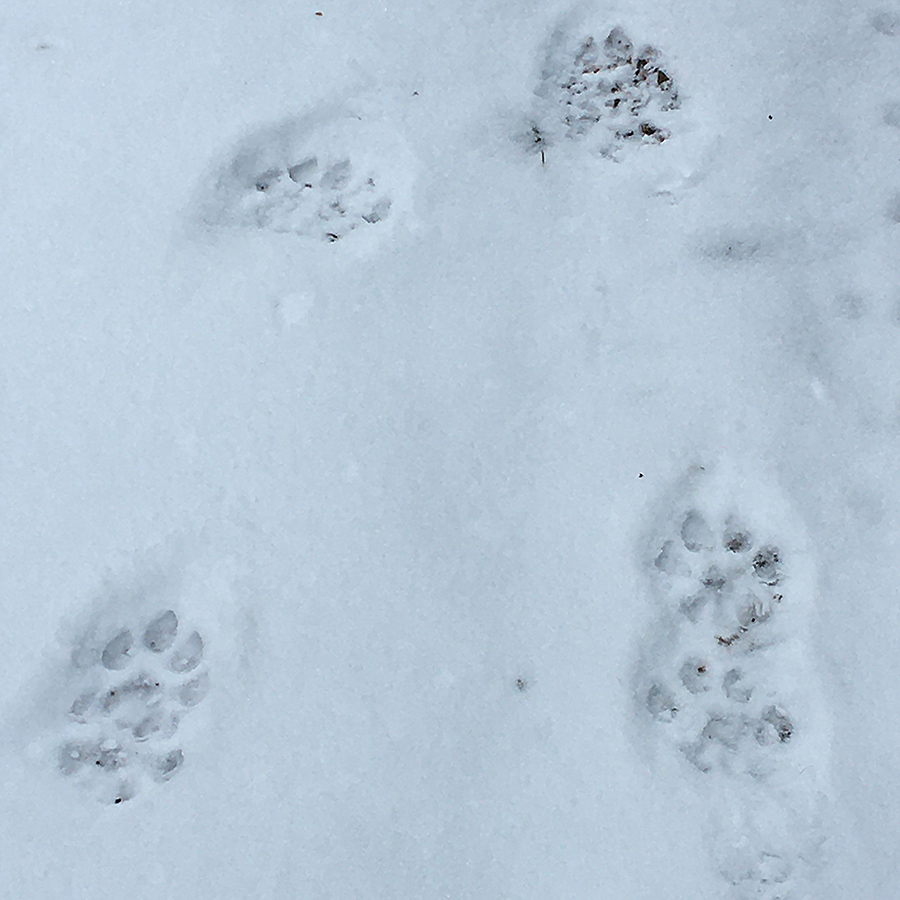 A closer view of the Cougar tracks. Photo: © Vic Newton 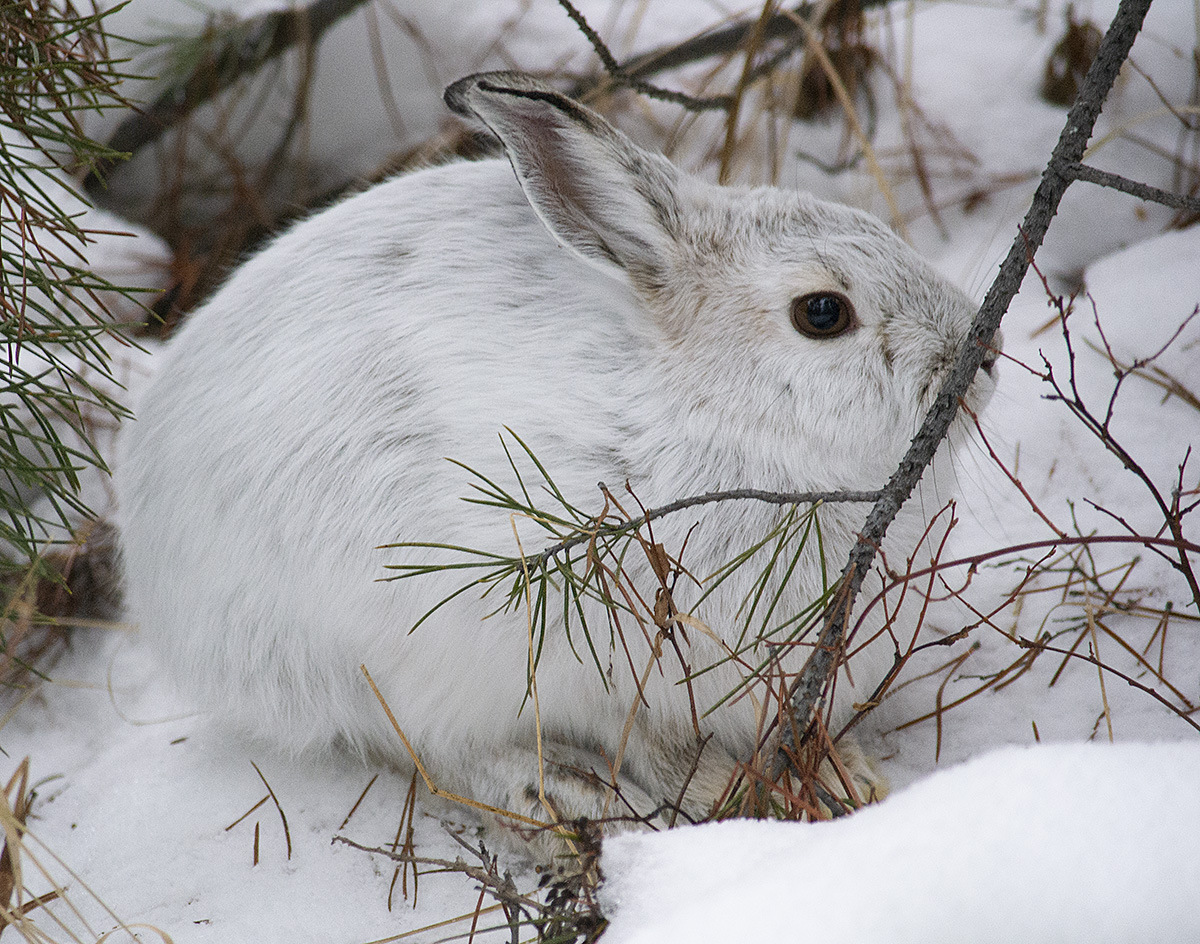 A lovely shot of a Snowshoe Hare pretending it is invisible in its white winter coat. Photo: © Paul Willms 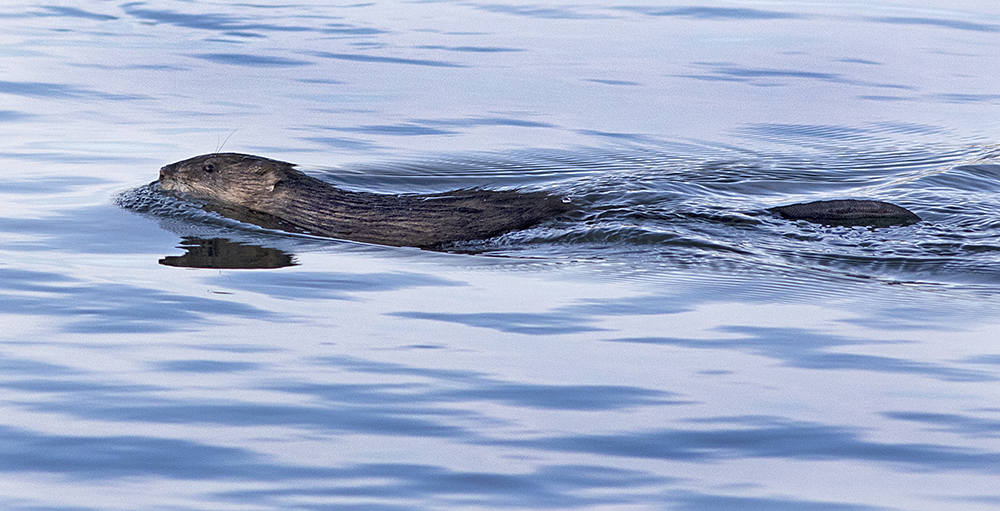 Muskrats remain active all winter, but those living at frozen-over lakes are seldom seen as they forage under the ice. This one was swimming in the Thompson River at Kamloops. Photo: © Alan Burger

It seems like a good winter for seeing owls ….. 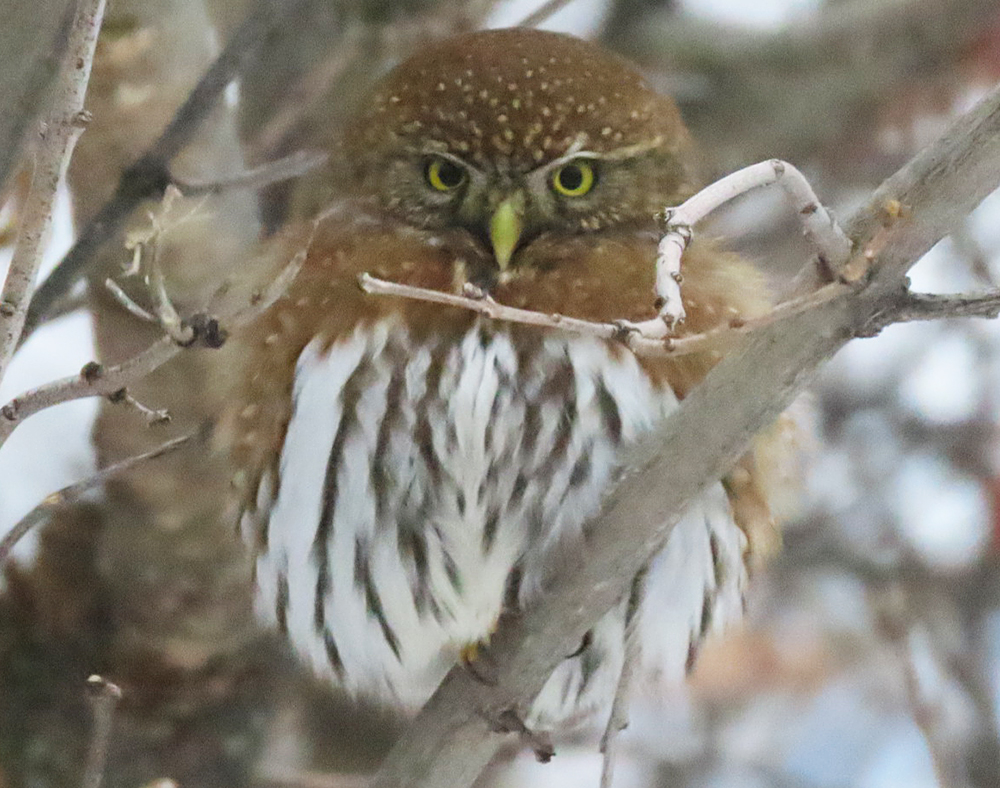 Vic Newton did not have to go far to get photos of a Northern Pygmy-owl – this one was in his backyard! Photo: © Vic Newton 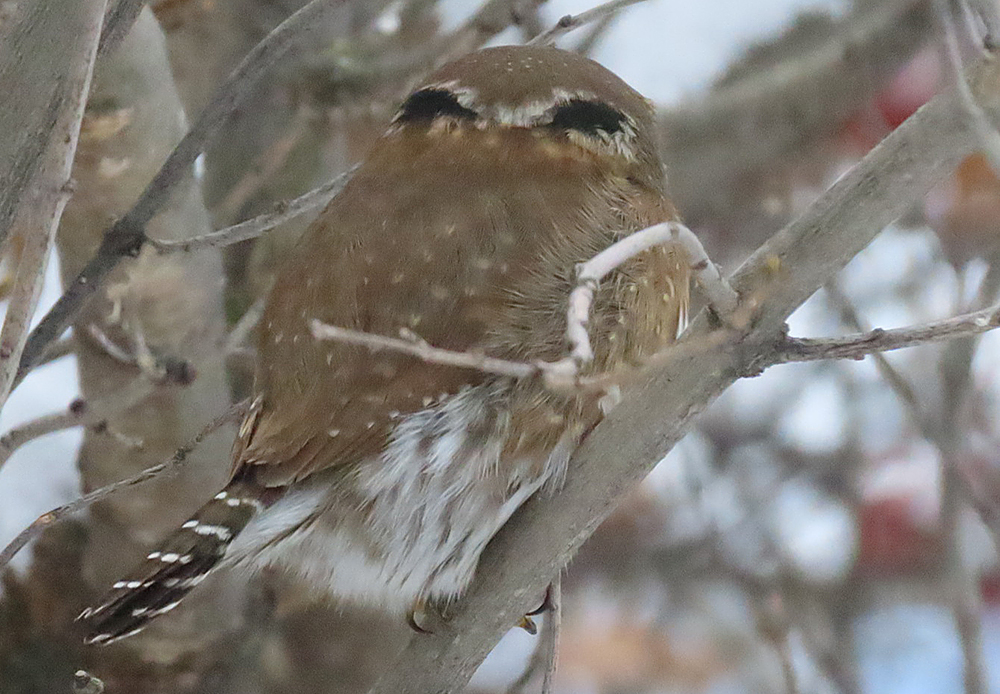 Pygmy-owls have “eyes” in the back of their head – or so it would appear. This feature of their feathers probably deters predation by larger owls or raptors on these tiny owls. Photo: © Vic Newton 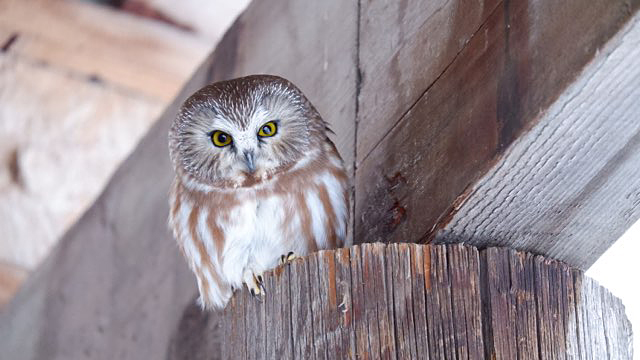 Another tiny owl – this time a Saw-whet Owl, which found a sheltered spot to roost during the day. This species is strictly nocturnal. Photo: © Cathy Tombes 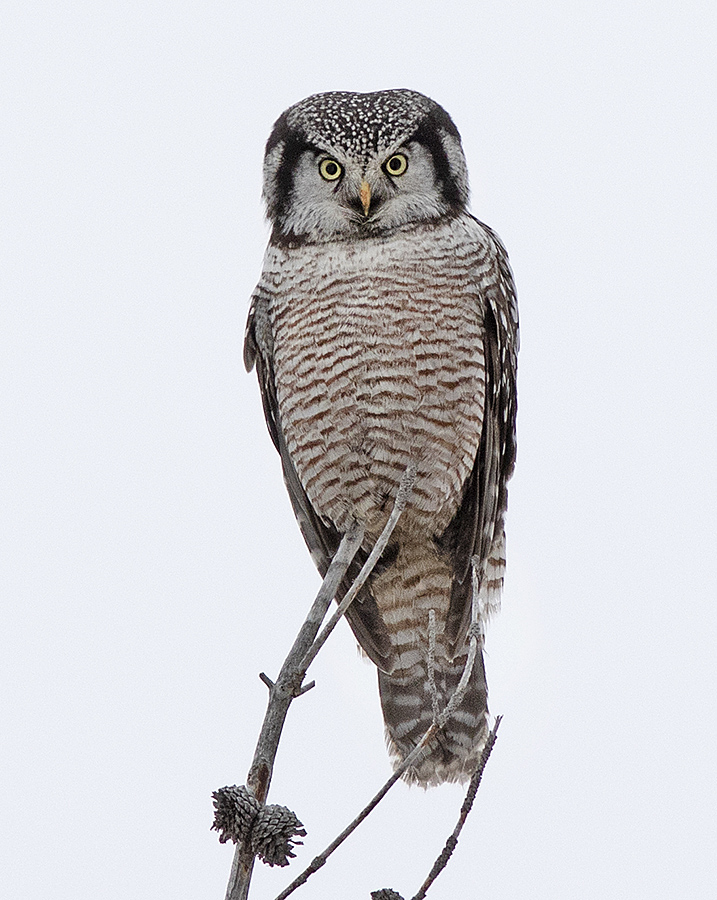 Northern Hawk Owls are rare in our area. This one was hunting for mice and voles during the day at a marshy forest-edge near Logan Lake. They are mid-sized owls, about as big as a crow. Photo: © Alan Burger 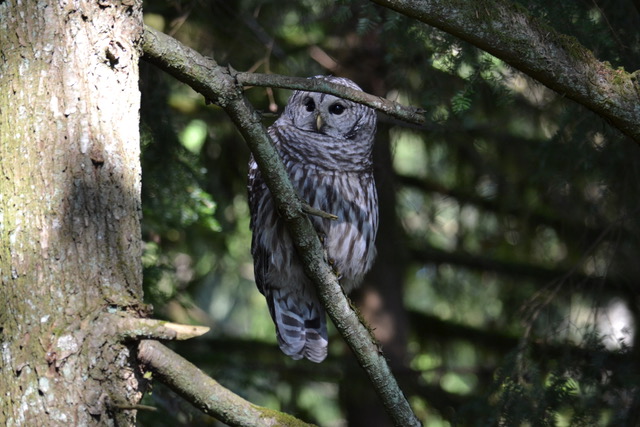 Barred Owls are now common through much of southern British Columbia, but before the 1950s they were seldom found here, being resident mostly east of the Rockies. Habitat change related to logging and agriculture has allowed the species to invade and thrive in B.C., although it remains fairly uncommon in our area. Photo: Paul Willms. 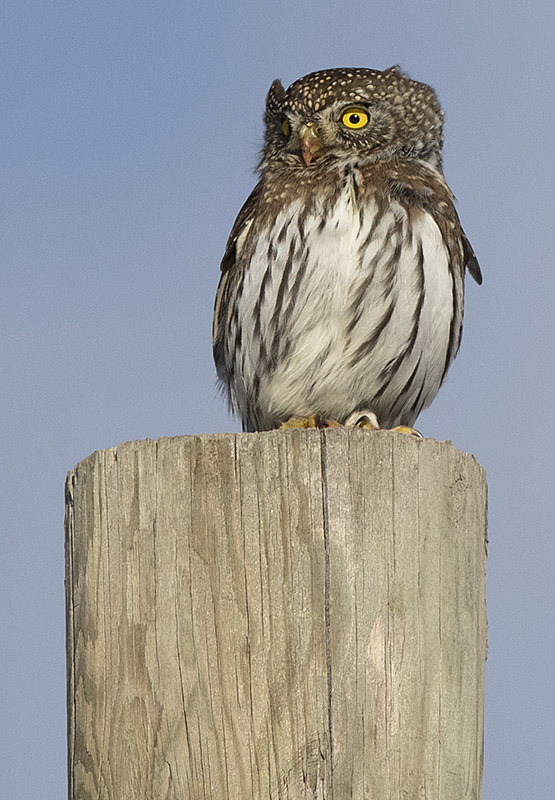 A Northern Pygmy-owl near the Quilchena Hotel – January 3rd, 2021. The fencepost gives one a good idea of how small these robin-sized owls are. Photo: © Alan Burger 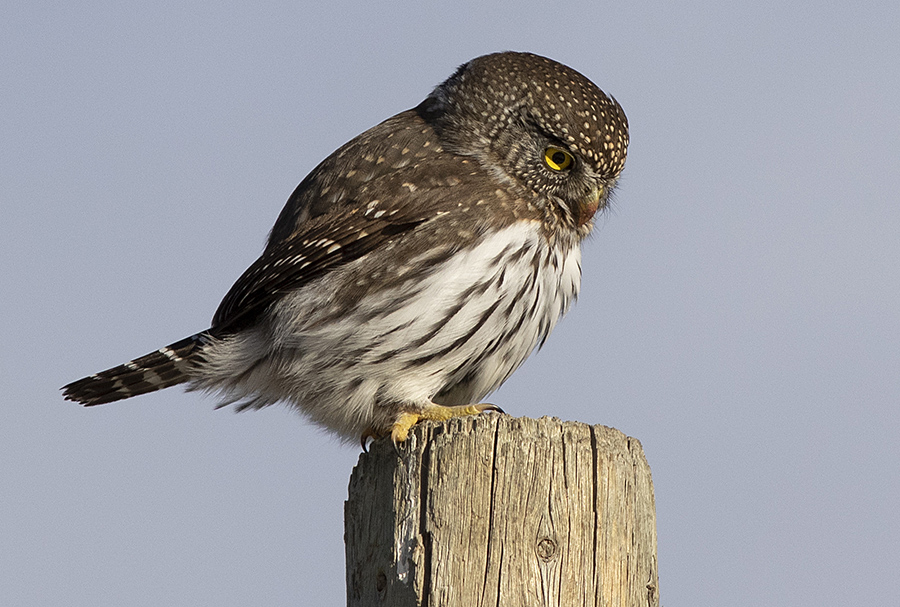 Another view of the same Northern Pygmy-owl. These owls mostly hunt during the day, and this one was so intent in searching for rodents in the long grass that it ignored the photographer. Photo: © Alan Burger

Raptors are also frequently seen in our area in winter. The next two photos show the two most common large hawks found in winter here. The differences in their underwing and tail patterns are key to identfying them when seen from below. 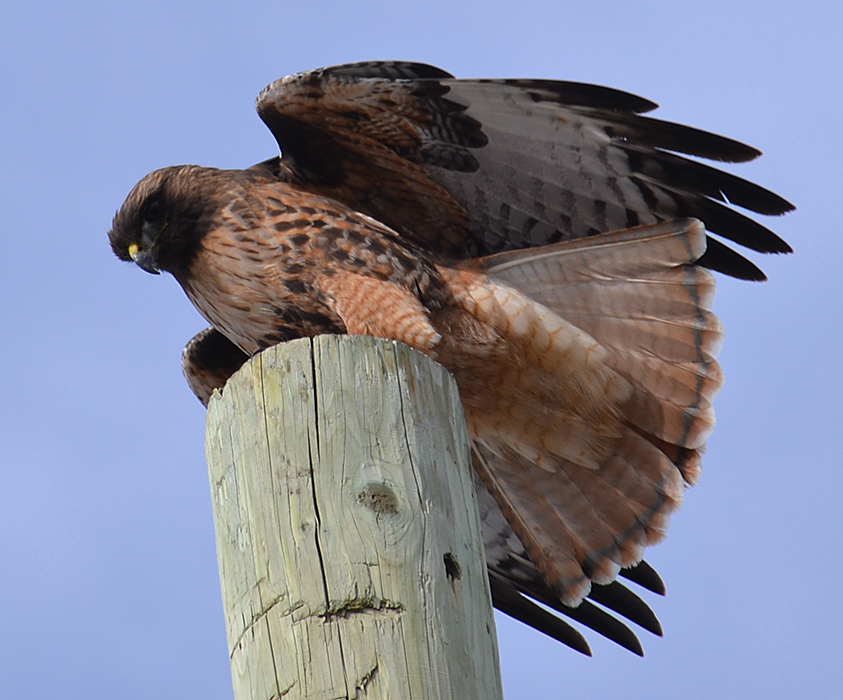 Red-tailed Hawks can be found year-round in our area and are our most common large raptor. This is an adult bird showing off its underwings and red tail. Notice the difference between this bird and the Rough-legged Hawk in the next photo: Photo: © Paul Willms 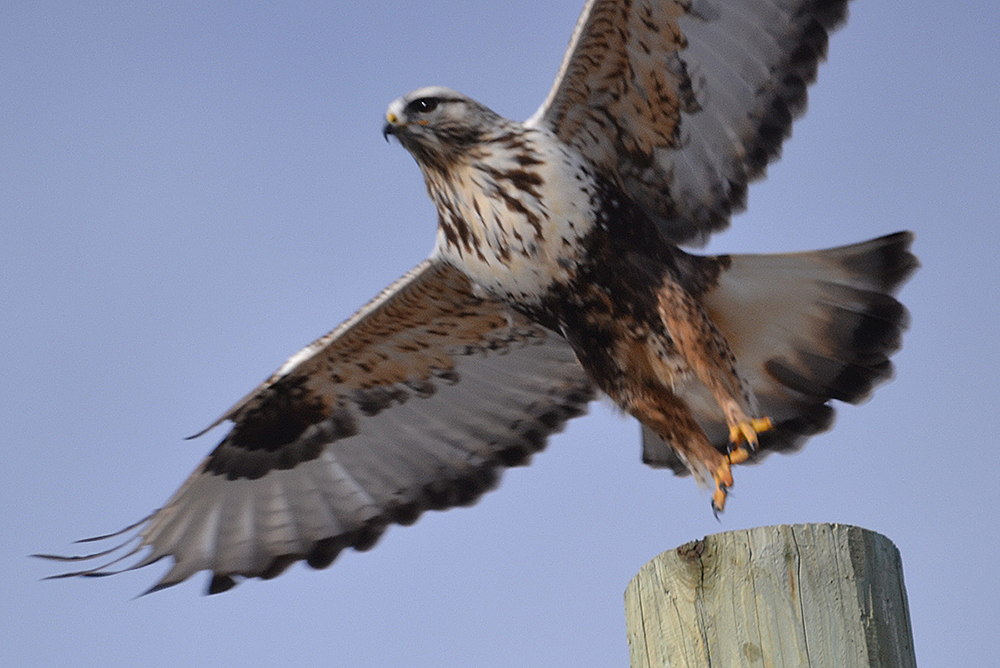 A Rough-legged Hawk. The name comes from the feathery legs – visible in this photo. This species breeds in the Arctic tundra but is a regular visitor to our area in winter. The small whitish head, black lower belly and black “wrist” patches are diagnostic identification features. Photo: © Paul Willms 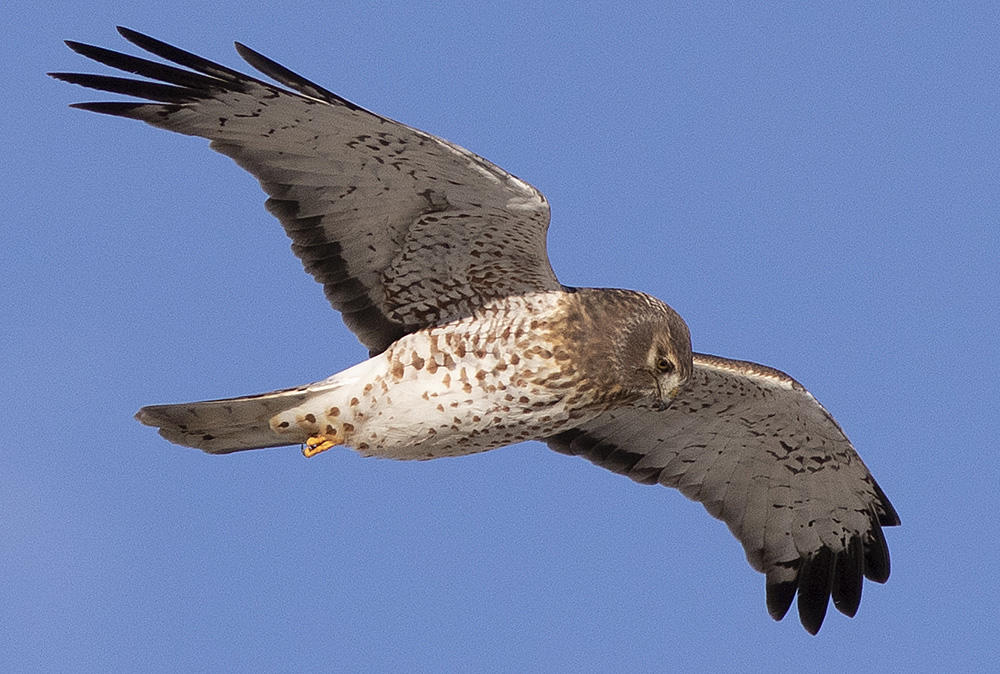 Another large hawk that is often seen in winter is the Northern Harrier. This raptor hunts by flying low and slow over open grassy areas and plunging down when it detects a mouse or a vole. The conspicuous white rump, barely visible in this side view, is a diagnostic feature of this species. Photo: © Alan Burger

Northern Harriers are among the most aerobatic of our raptors, doing interesting contortions while in flight if they see something interesting below. Photos: © Alan Burger

Here are some photos of two closely-related finches – one common in our area most of the time and the other a rare and unpredictable visitor. 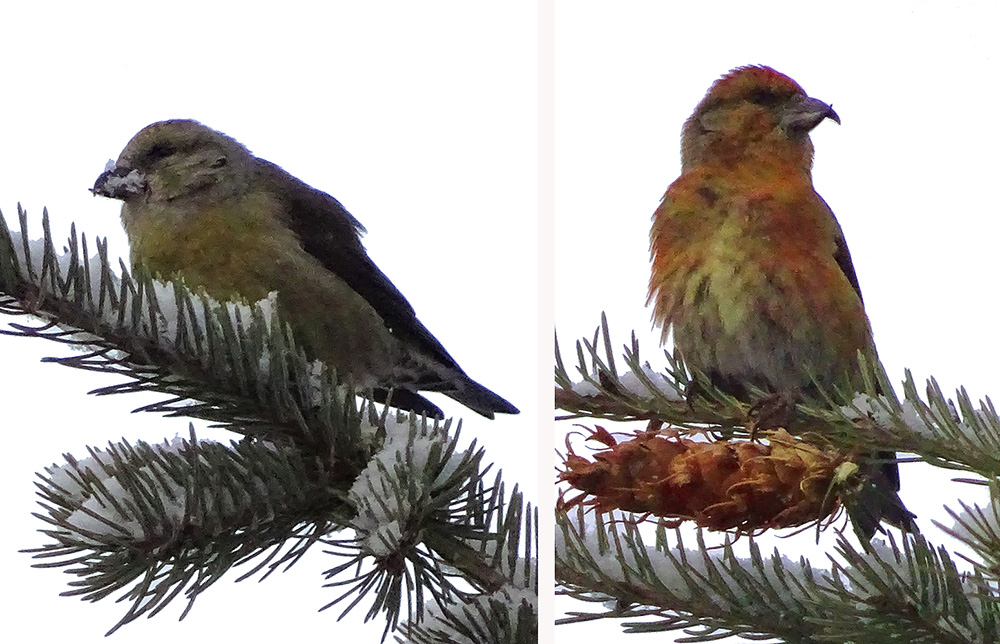 The Red Crossbill is an interesting species and generally found year-round in our area. The crossed beak allows them to pry seeds from conifer cones. There are at least five different morphs of this species; each morph favours a different conifer species and has a slightly different beak shape and subtly different calls. Here are a female (left) and male, evidently the type that prefers Douglas-fir cones. Photos: © Anne Pang 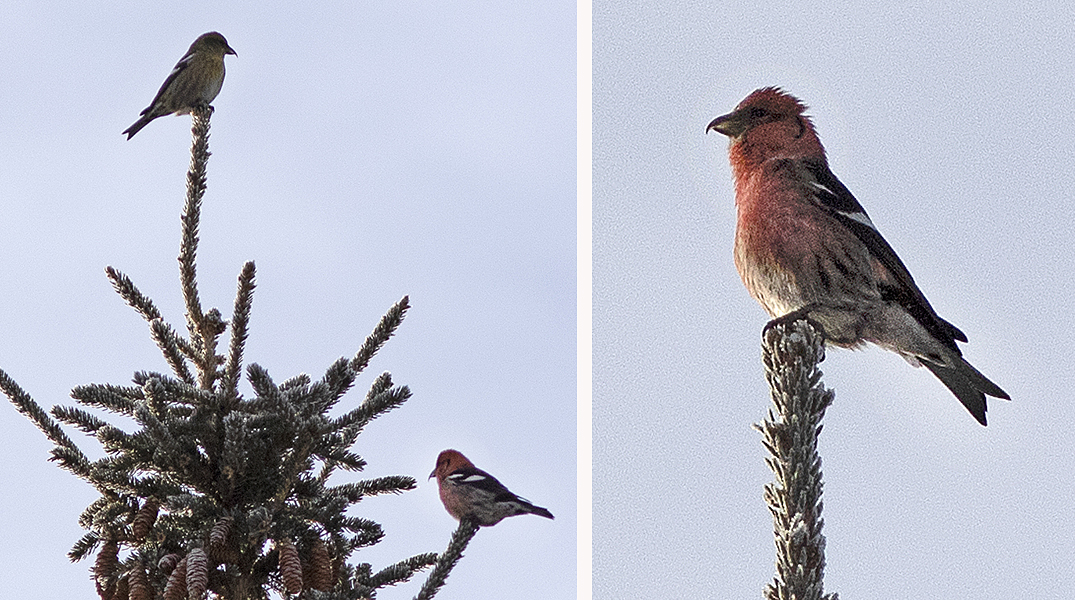 White-winged Crossbills are far less common in our area than their Red Crossbill cousins. These ones were seen on the Savona Christmas Bird Count. Photos: © Alan Burger

And to wrap up, a pic of a bird we see all year round which is always a reliable contributor to Christmas Bird Counts across much of our province. 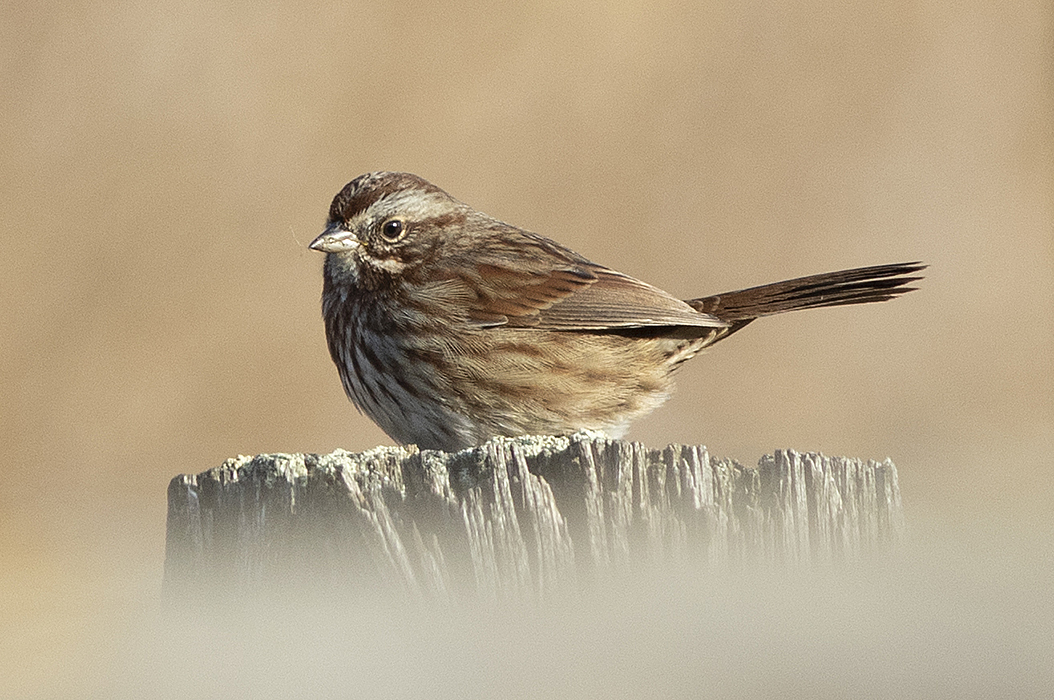 A Song Sparrow, fluffed up to resist the winter cold. Photo: © Alan Burger

To see photos and the results of the Merritt Christmas Bird Count on 20 December 2020 click here: Merritt CBC 2020