Our annual Snow Bunting Shiver Sunday on February 27th 2022 was a success, despite some initial weather threats. Every year we venture up to the Douglas Lake plateau at this time to look for winter specialties in the high grasslands. Early morning snowfall promised a cold, dreary day but by the time we got going the weather had improved and it was a very pleasant, if blustery day. Six members showed up which made for a convenient 3-car convoy. The roads were in reasonable shape so we all managed both the Pennask Lake Road (which is well maintained) and the more dicey and muddy Minnie Lake Road to end up at Douglas Lake and loop back to Merritt. All our travels were on public roads with no intrusion on to the private ranch-land or First Nations reserve. 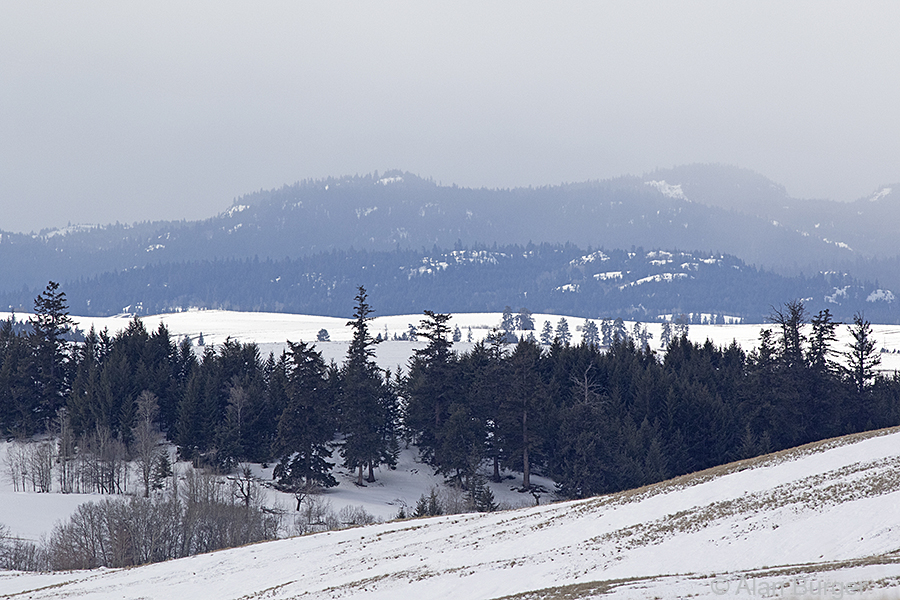 Highlights of the day were mostly of the mammalian kind. It was a thrill to encounter three separate groups of Moose – five animals in total. This species is becoming harder to find in our area. The first was a big mamma Moose and a big calf, quite close to the road. 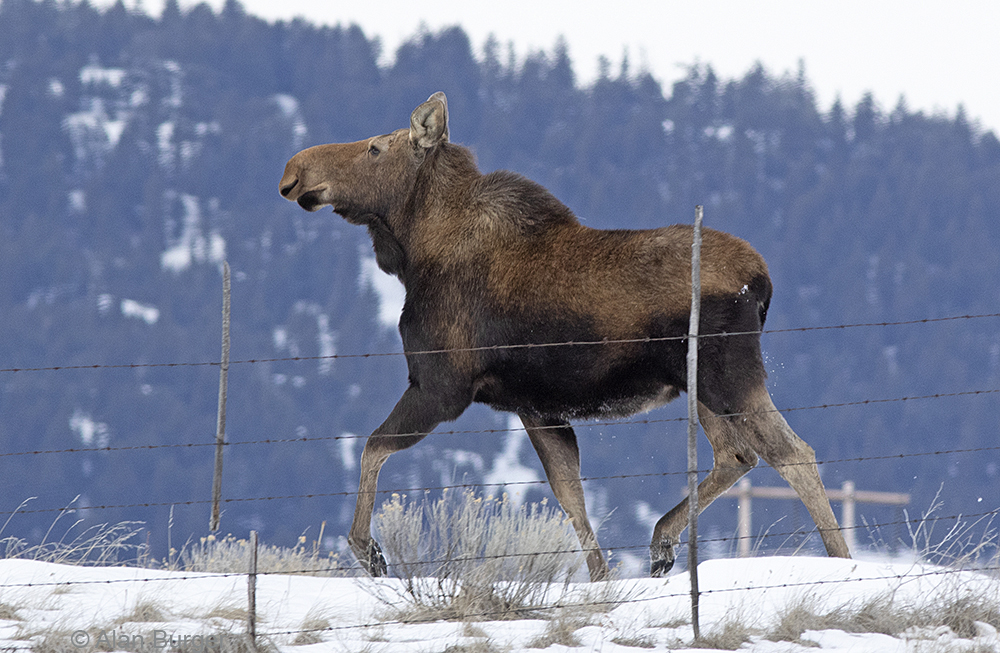 This female moose was our first wildlife encounter on 27 February. Photo: © Alan Burger 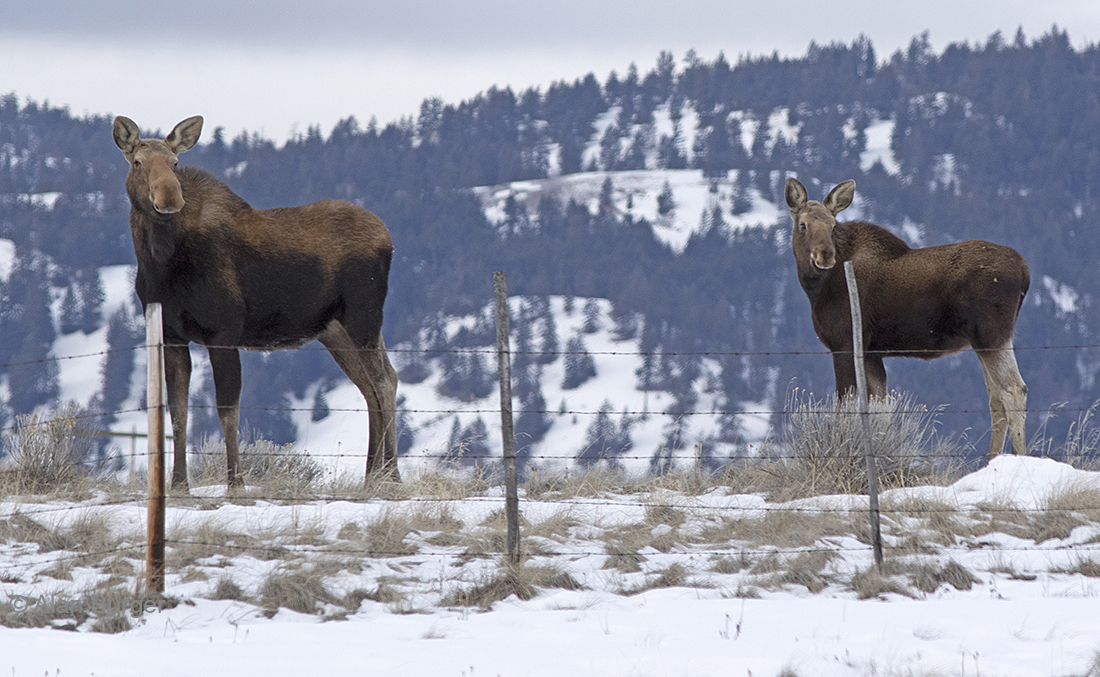 Big mamma was joined by big baby – a very large calf. What a treat to see these healthy-looking animals that are now quite rare in the Merritt area. Photo: © Alan Burger Our second Moose encounter was on the Minnie Lake Road – again two animals. 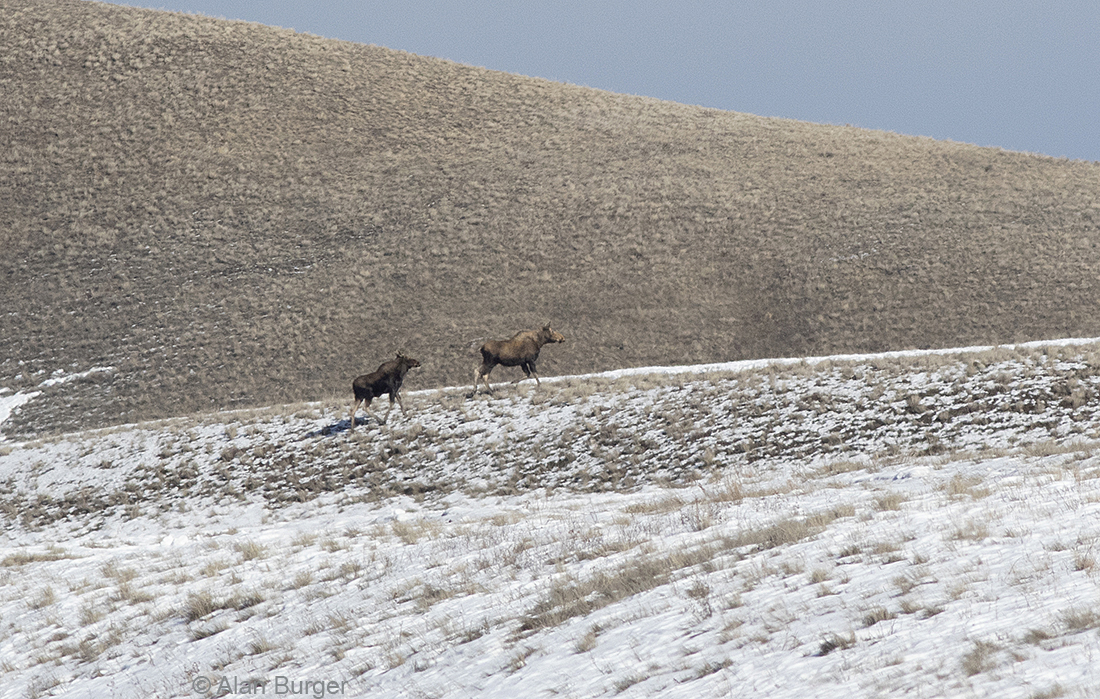 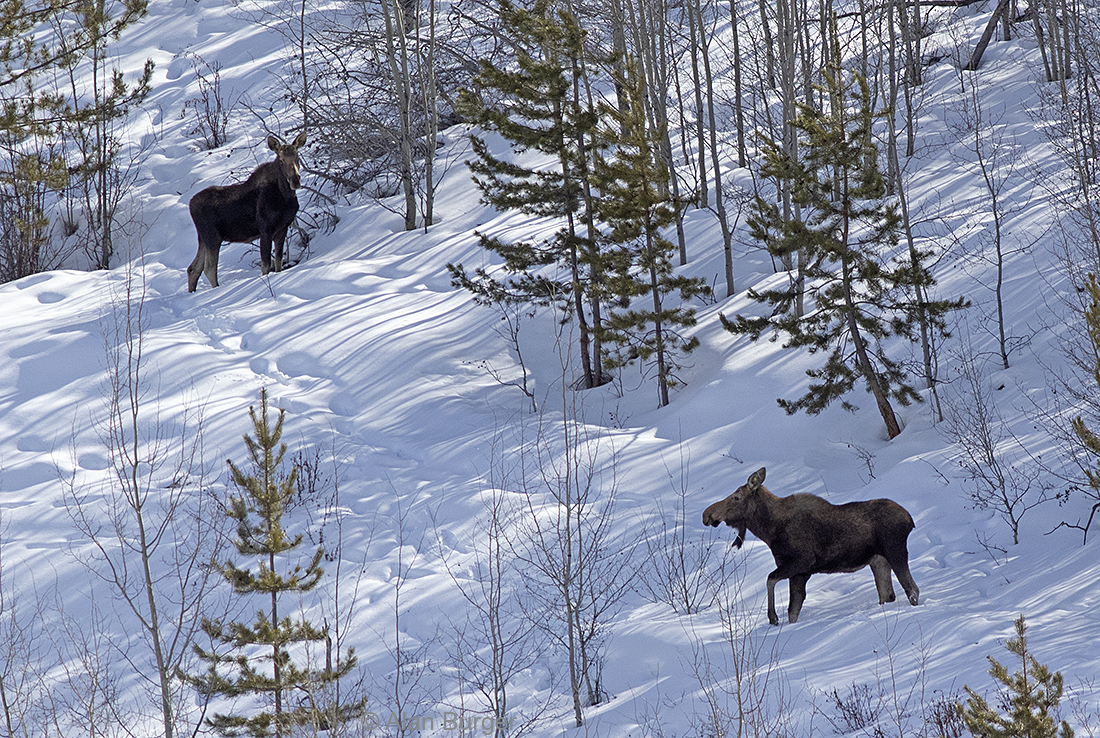 We saw this pair again as they traversed a forest patch. Photo: © Alan Burger

Our final encounter was also on the Minnie Lake Road. 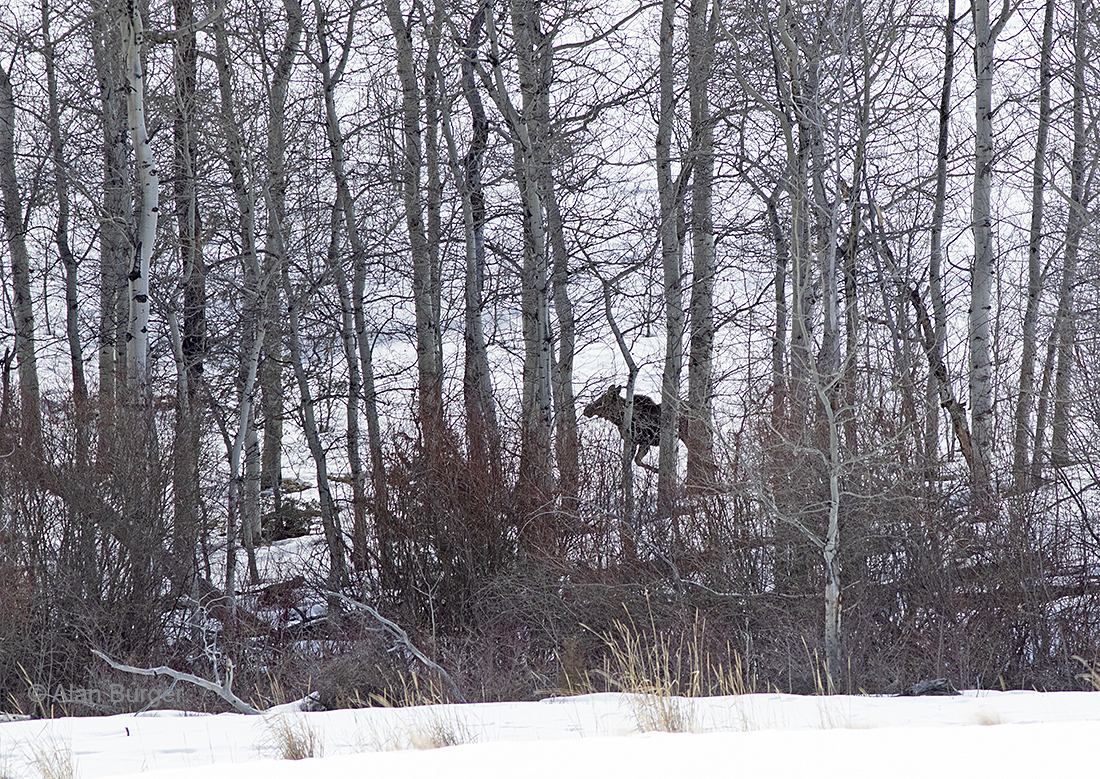 White-tailed Deer were the other ungulate that we encountered – a lone animal and later a herd of eight. Strangely enough we saw no Mule Deer – they are usually the most common mammal that we see on these trips.

Coyotes are in the midst of their mating season – as a result we saw many – at least 15 – mostly in groups of two or three. Because they get shot at they were understandably very wary and were mostly seen heading away as fast as they could. 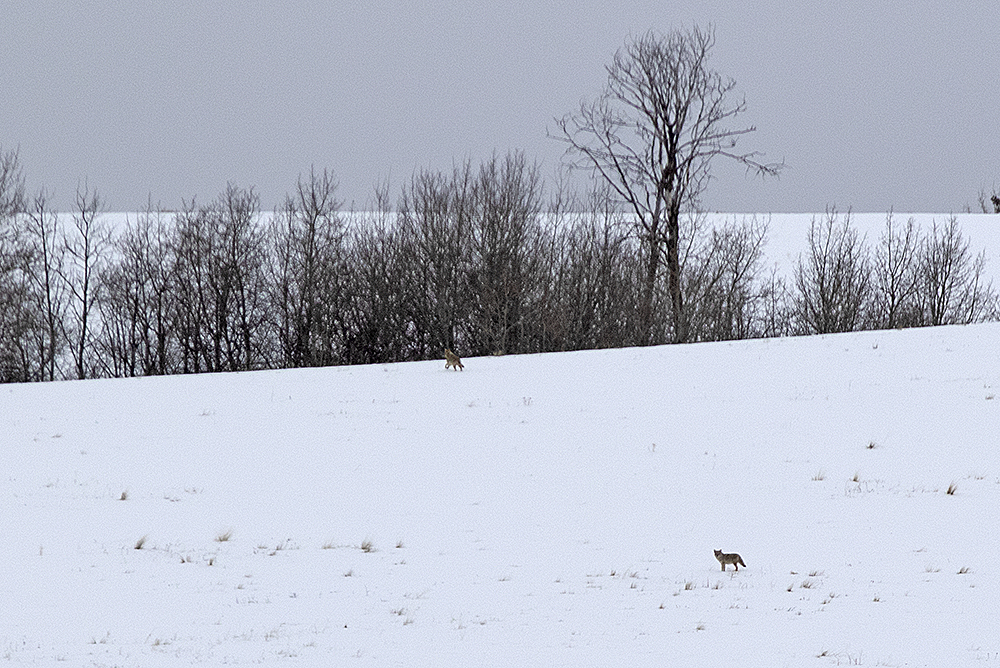 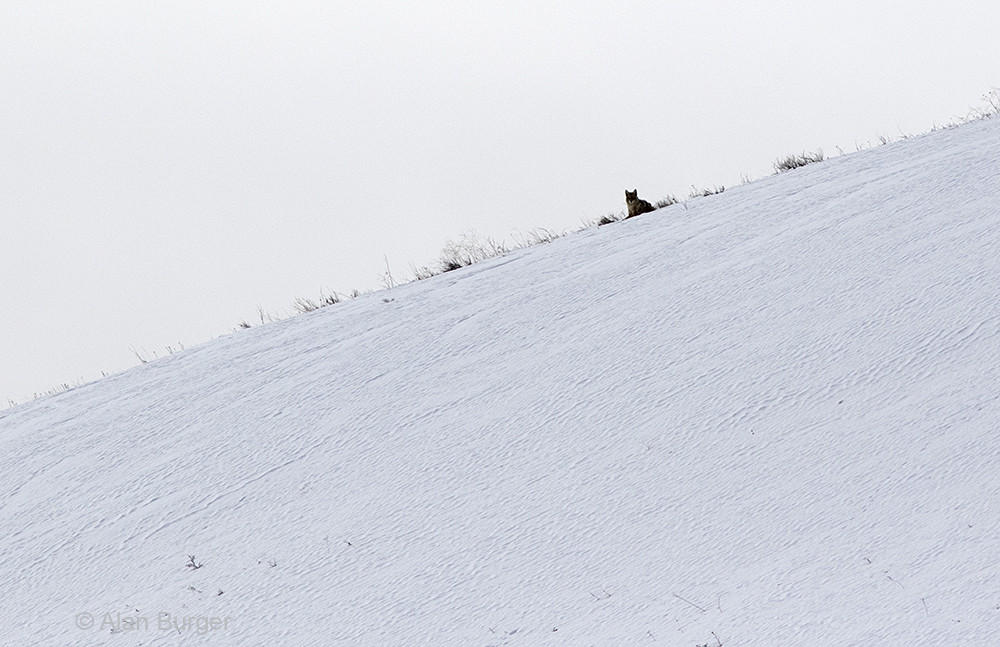 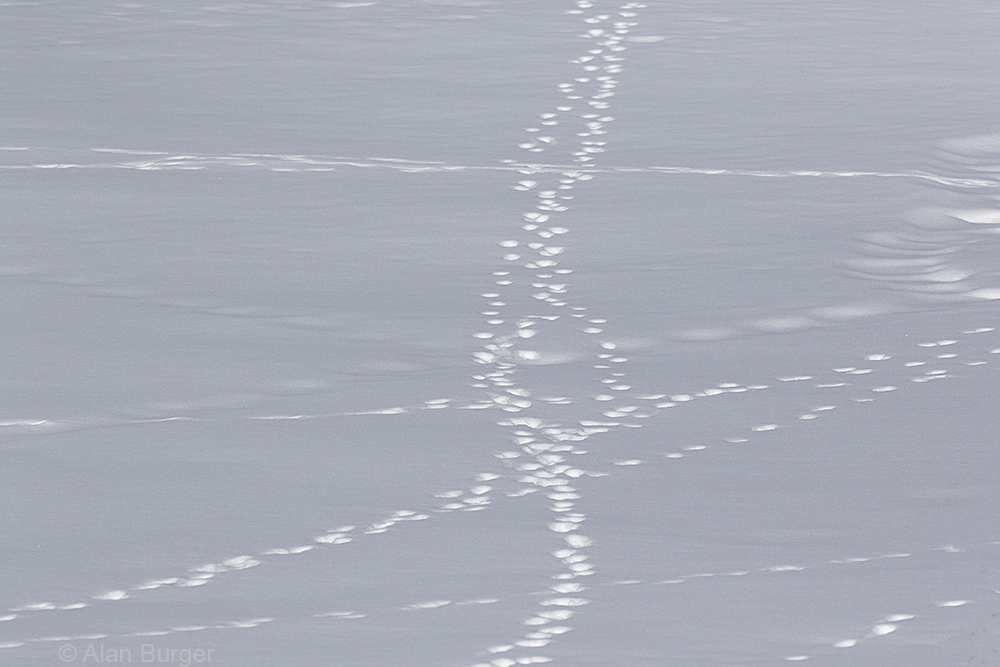 A sample of the multitude of Coyote tracks. Photo: © Alan Burger

Birds were rather thin on the ground or in the air. We did see the usual ravens and magpies, but relatively few. And only 3 Rough-legged Hawks and no Red-tailed Hawks. Our first exciting bird was this lone Horned Lark – this striking bird flew back and forth around our vehicles for several minutes allowing photos and great views. 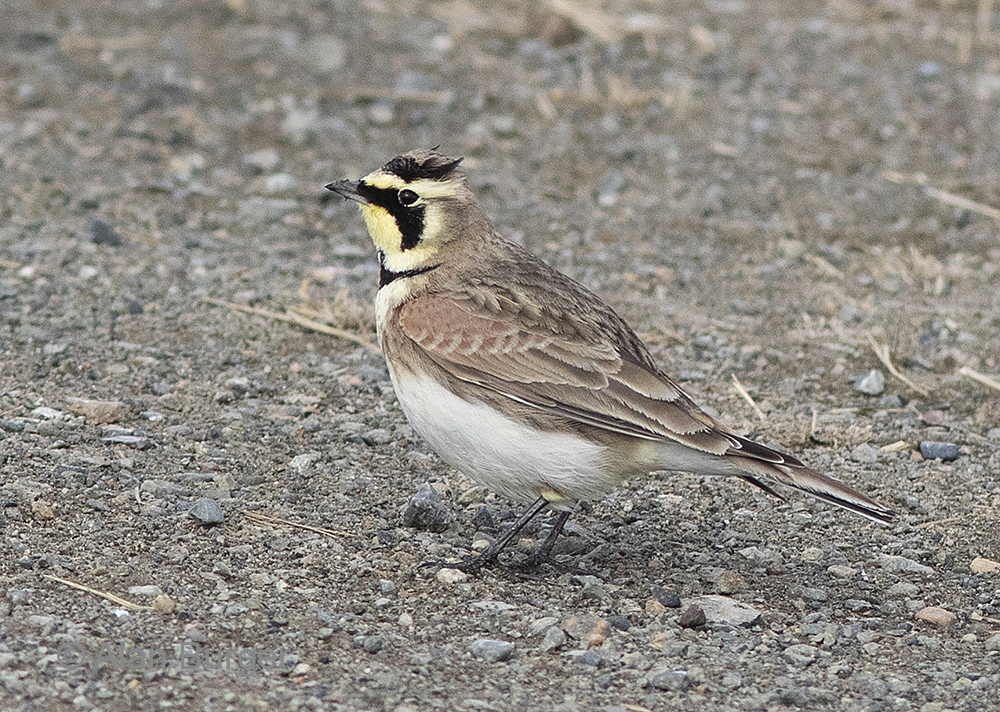 A Horned Lark foraging on the gravel road – Pennask Lake Road, 27 February 2022. Note the feathery head tufts that give it its name. Photo: © Alan Burger 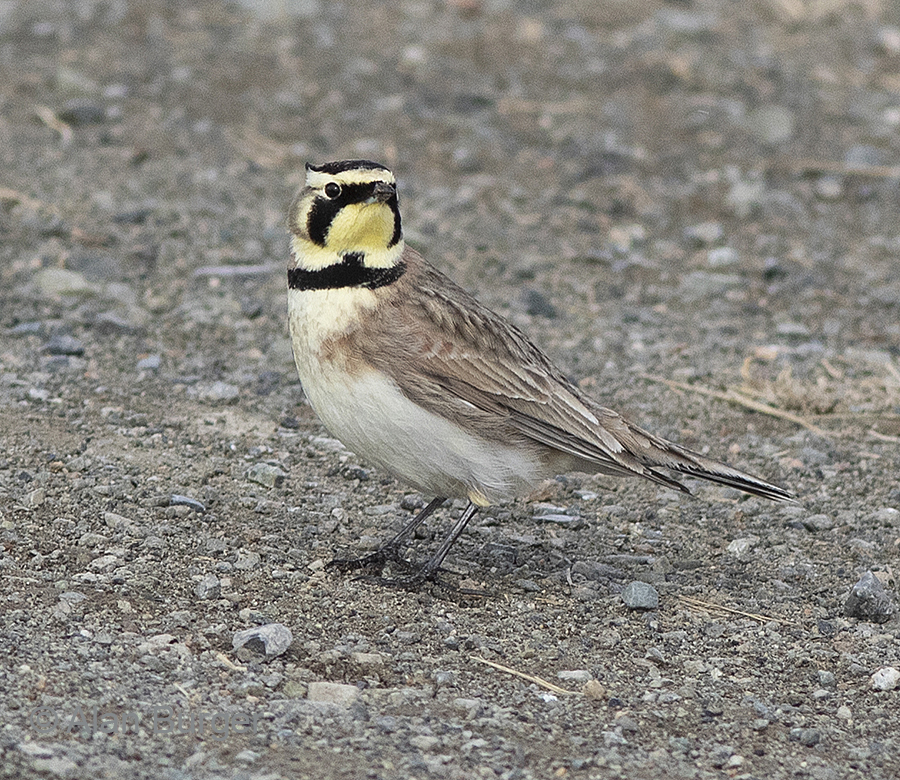 Another view of the same Horned Lark. Photo: © Alan Burger

And nearby a more commonly-seen Black-billed Magpie. 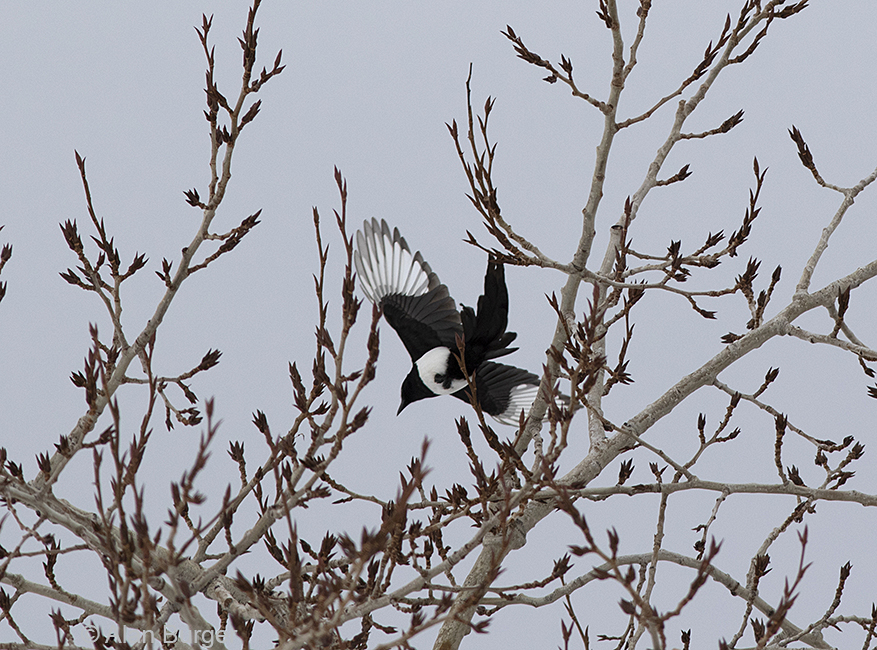 What about Snow Buntings? Well, true to the outing name we were indeed shivering in a cold wind as we watched this lone bird foraging in the bunchgrass. It is highly unusual to have just one of these birds alone, but we searched in vain for a larger flock. So this was our only Snow Bunting of the day. 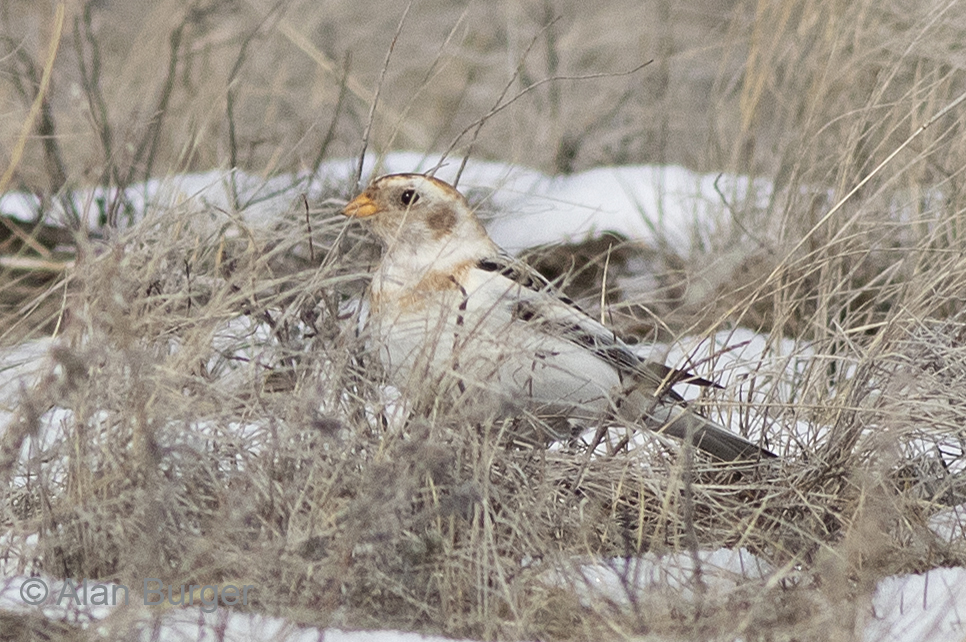 The lone Snow Bunting that justified the name of our winter outing. Photo: © Alan Burger 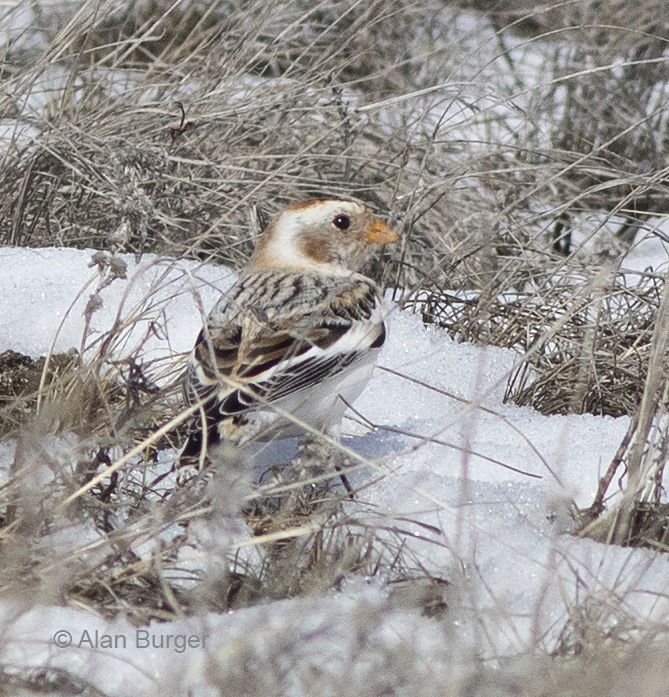 Snow Buntings breed in the Arctic but migrate south into southern latitudes for the winter. In our area they are most often found in the high grasslands. Photo: © Alan Burger 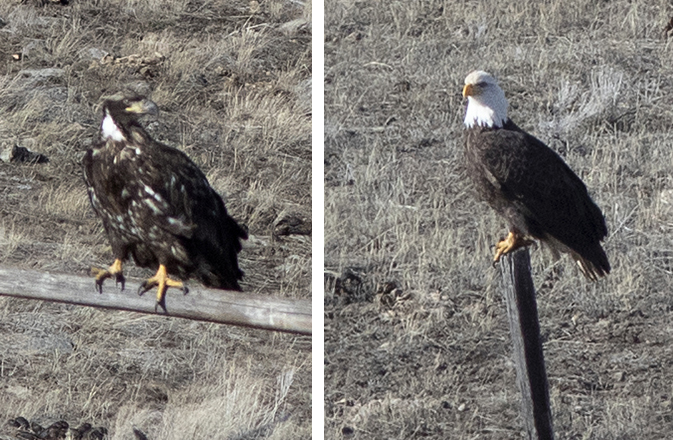 These Bald Eagles were hanging around a site along with ravens and magpies – probably indicating some carrion nearby. Immature bird left and adult right. Photos: © Alan Burger 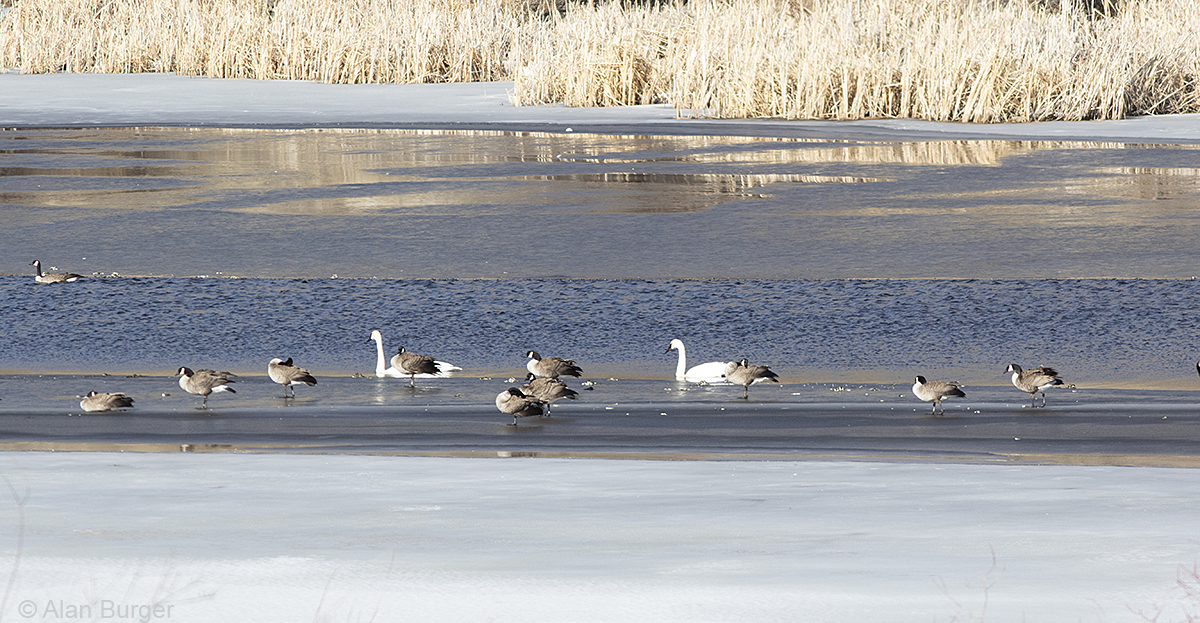 And finally a couple of photos of our happy crew, enjoying a lunch break in the shelter of an aspen grove 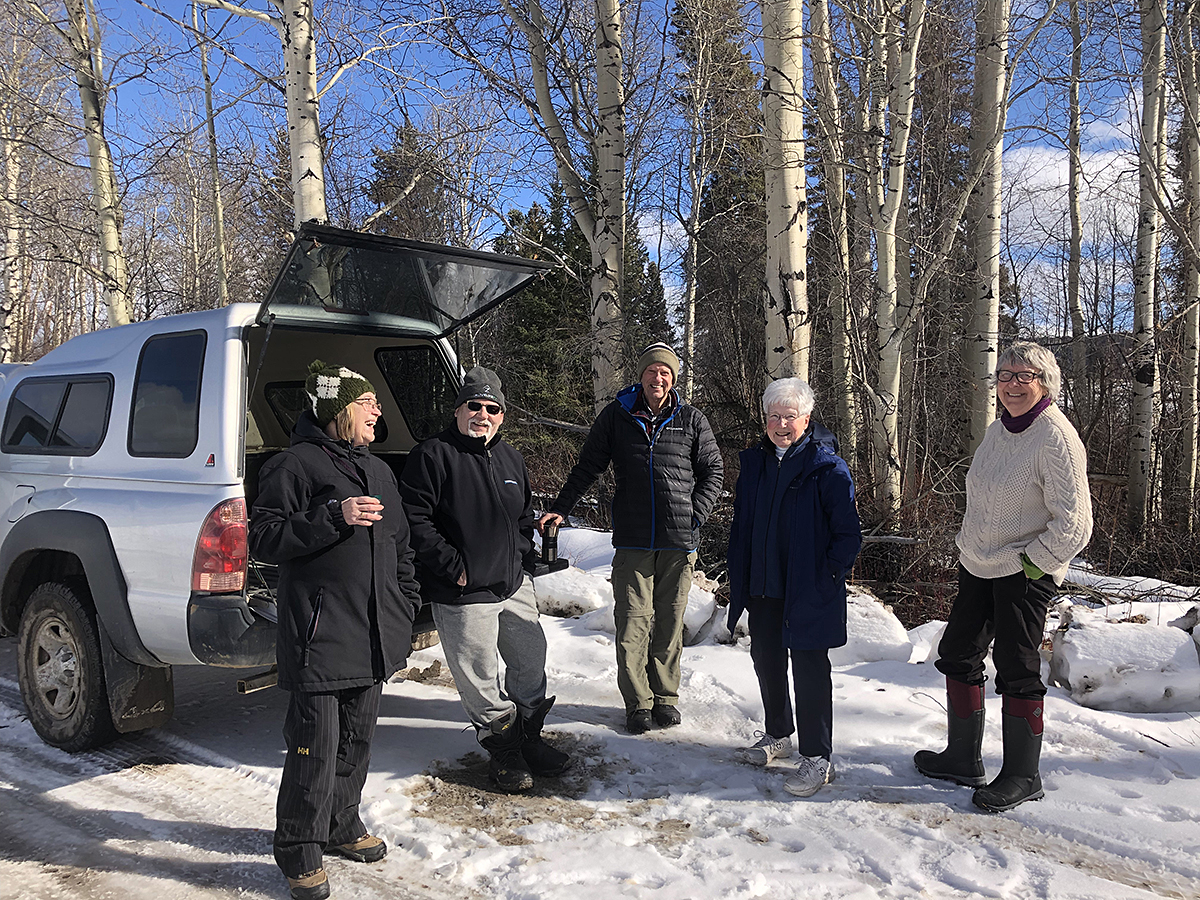 The Snow Bunting Shiverers at the lunch break. 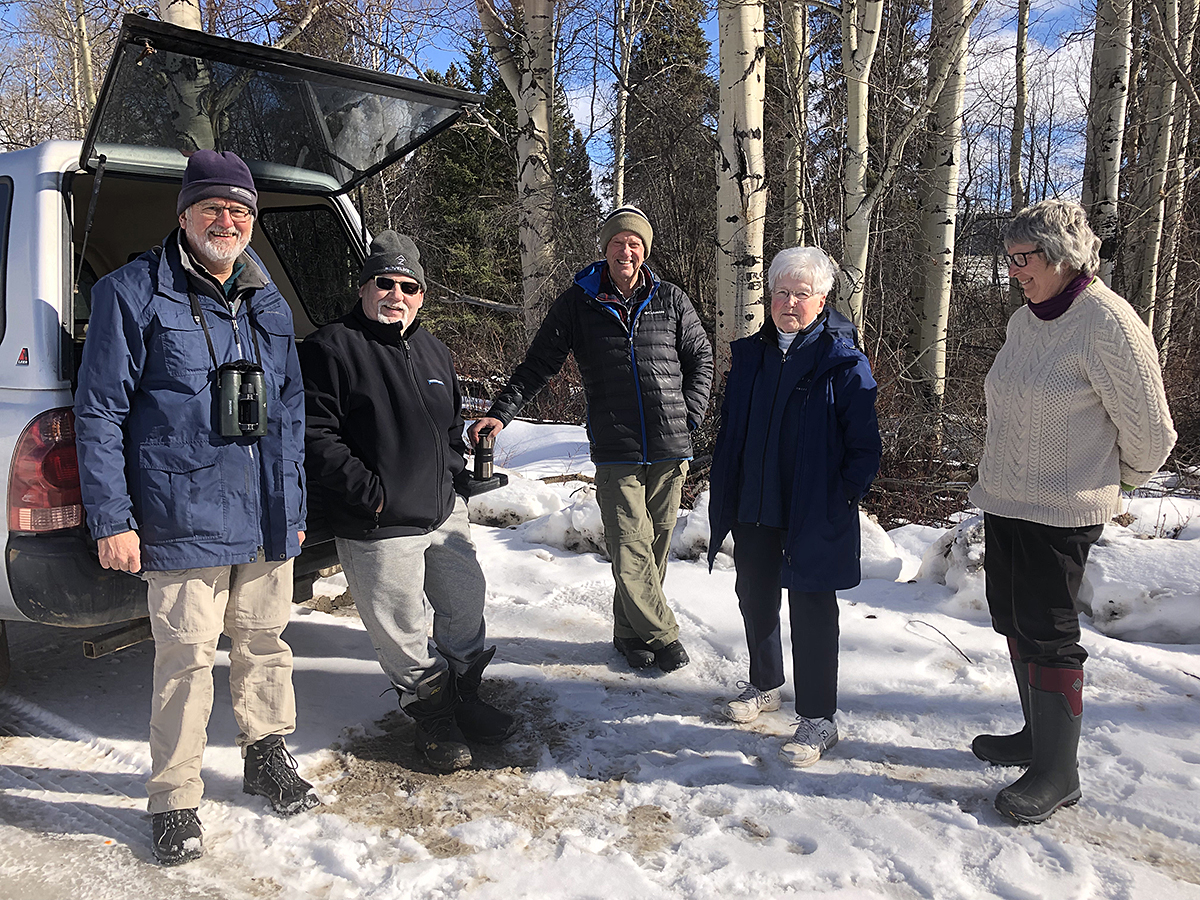 Another look at the Nicola Naturalist Society members on the Douglas Lake plateau.