Well, a picture is worth a thousand words ……. 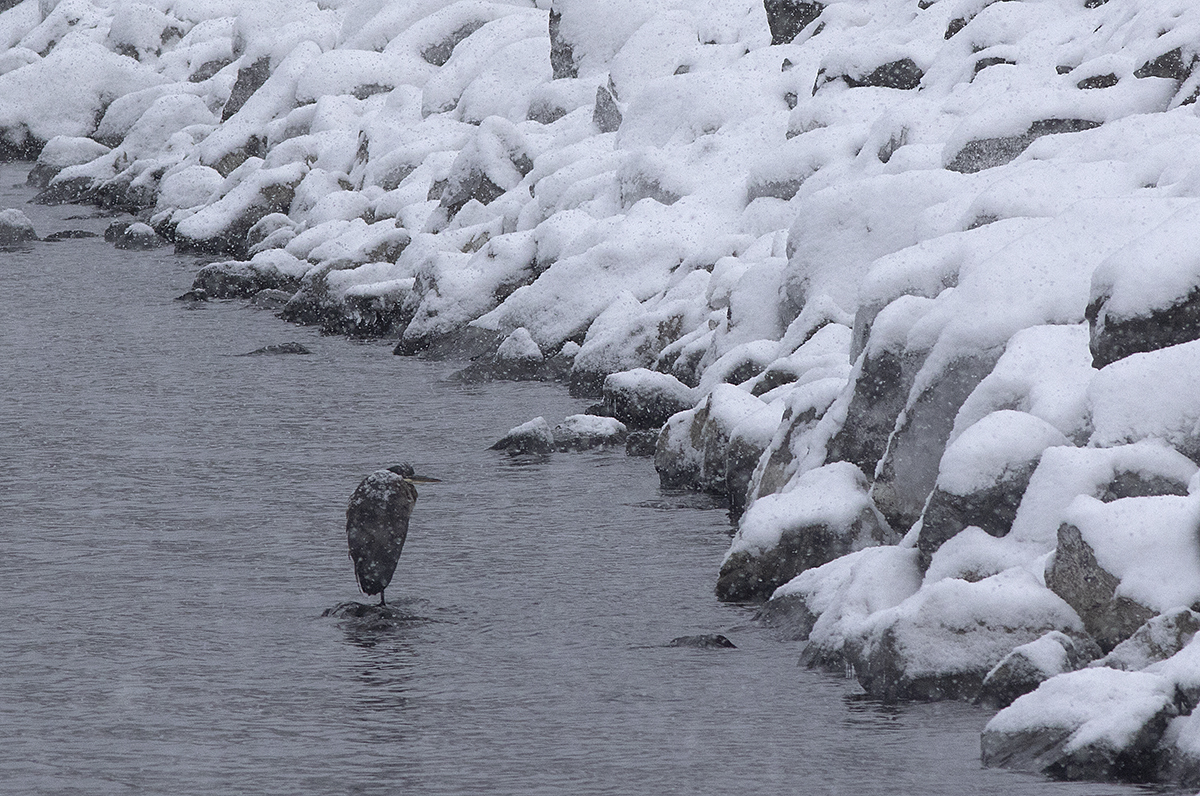 For most of the day on 17th December our field groups experienced the conditions this heron was tolerating – heavy snowfall and -8C temperatures with some wind. Getting useful photographs was a major challenge. Incidentally, this was the only Great Blue Heron to be found on the count day.

But, despite the snowy conditions we had a good count. We had 21 people out in the field and 3 feeder-watchers. We recorded 60 species on the count day (close to the average of 61 across 24 years) and two additional species during the count week. We recorded a record high count of 9,154 birds (more than double the long-term average) thanks mainly to huge flocks of Mallards that were on Nicola Lake and feeding on the hayfields at nearby ranches. We tallied 5,199 Mallards and that included leaving out over 3,000 ducks we saw on Nicola Lake that we assumed had been counted on the hayfields.

Some of the highlights:

We recorded two species that were new to the Merritt Christmas Bird Counts. The first was Sharp-tailed Grouse seen in the Quilchena area – first a flock of 21, counted accurately as they flew directly overhead after the observers had seen them in the nearby trees and thickets. An hour later a lone bird was found some distance away and clearly not part of the bigger flock. This grouse species inhabits the high grasslands and was likely driven to lower elevations by the deep snow cover we are experiencing this winter. 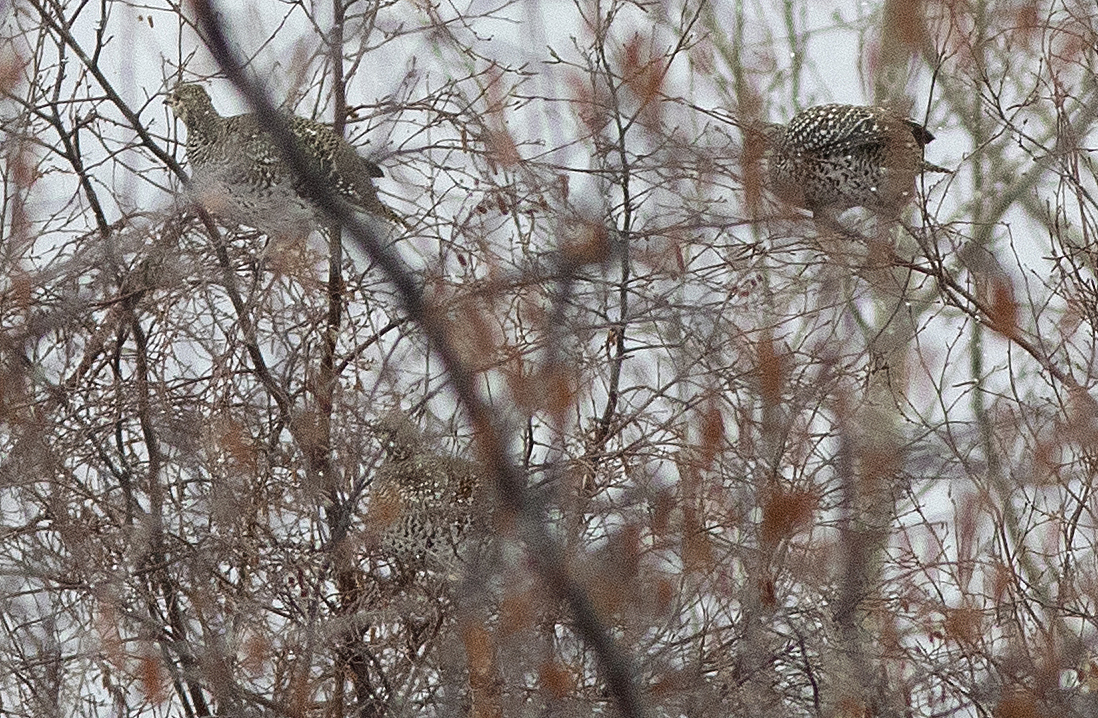 Three Sharp-tailed Grouse feeding on buds in the thickets near Nicola Lake. These were part of a flock of 21. Photo: © Alan Burger. 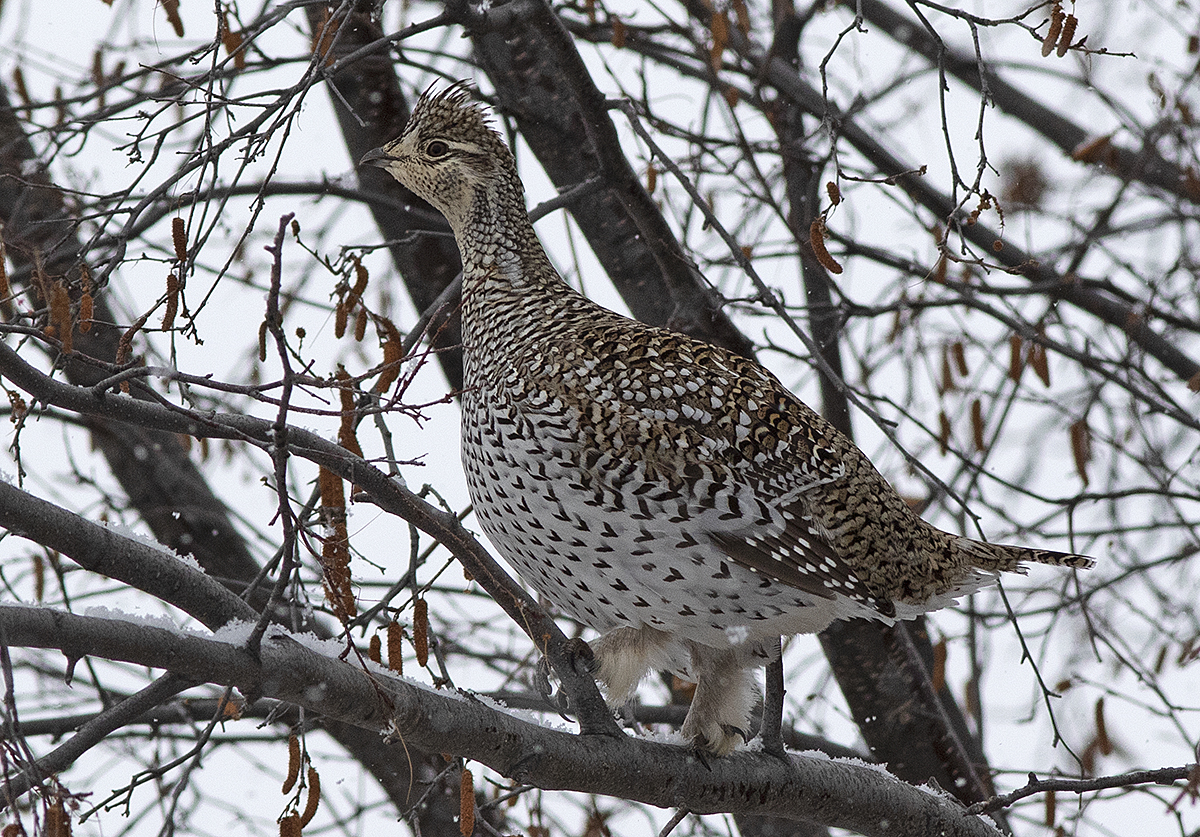 A lone Sharp-tailed Grouse in the Quilchena area. © Alan Burger

The second new species to our count history was Snow Bunting – a flock of 15 on the hayfields of the Huber Ranch near Quilchena. This species was a Count Week sighting in 2013, but has never appeared on the count day. No photos were obtained, but this location often supports Snow Buntings in winter.

It was a good year for picking up owls. Northern Pygmy Owl and Great Horned Owl are  fairly regular species for our count (found on 11 and 7 previous counts, respectively), but a Short-eared Owl, seen near Quilchena, is only the second occurrence for a Merritt CBC. 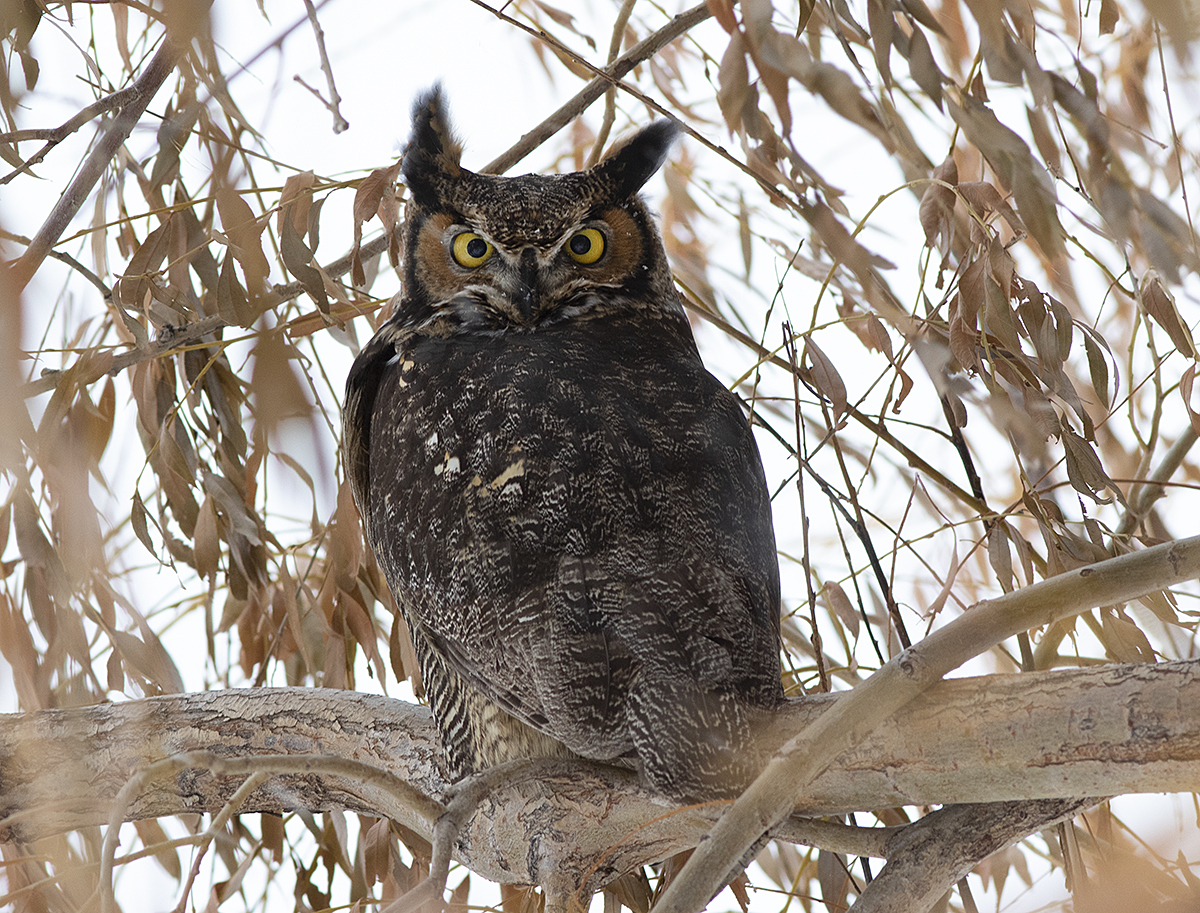 It was also a good year for the two Buteo hawks that occur in winter in our area. We recorded 24 Red-tailed Hawks (well above the average of 15) and 15 Rough-legged Hawks (close to the all-time high of 16 birds). 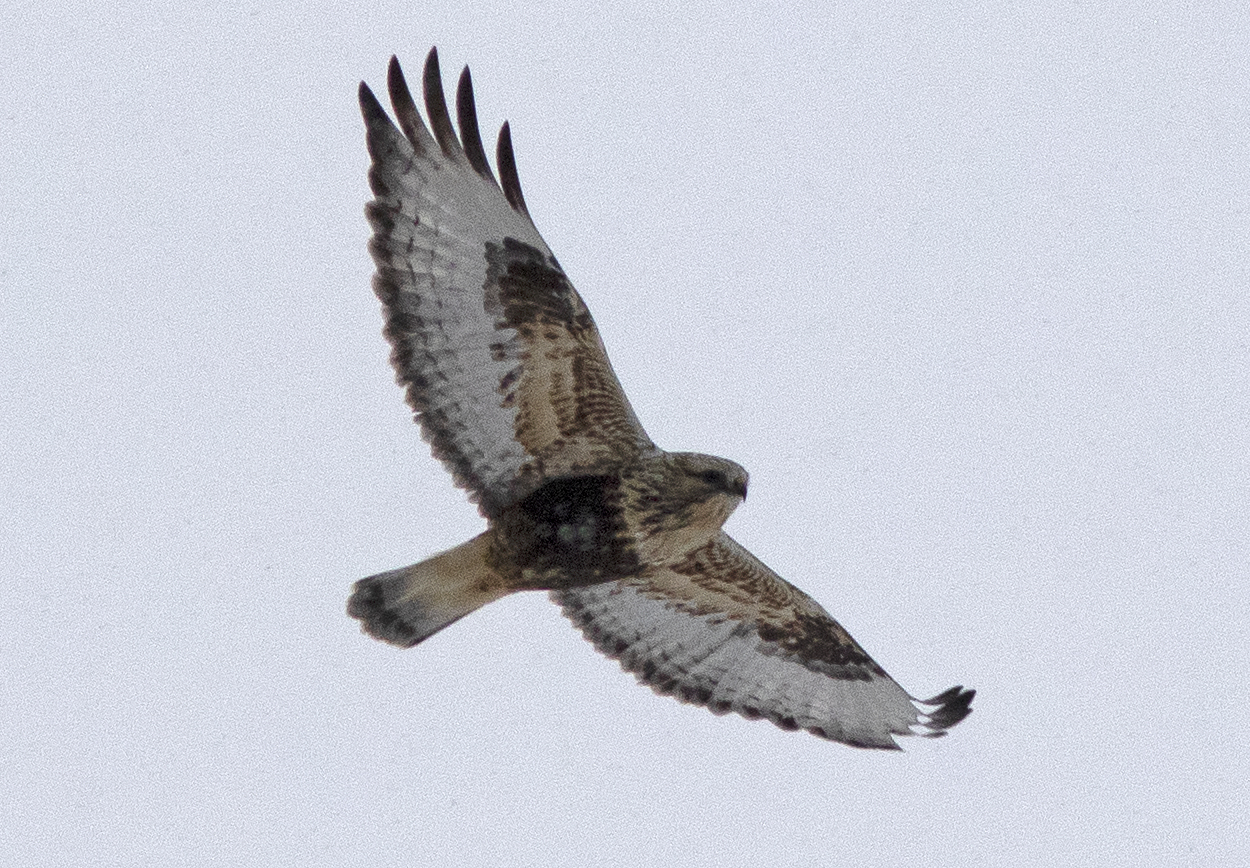 Rough-legged Hawk on the count day, 17 December 2022. This hawk visits us in winter, migrating south from its summer breeding grounds in the arctic tundra. Photo: © Alan Burger

Several other species occurred in high numbers, compared to the previous 23 counts: 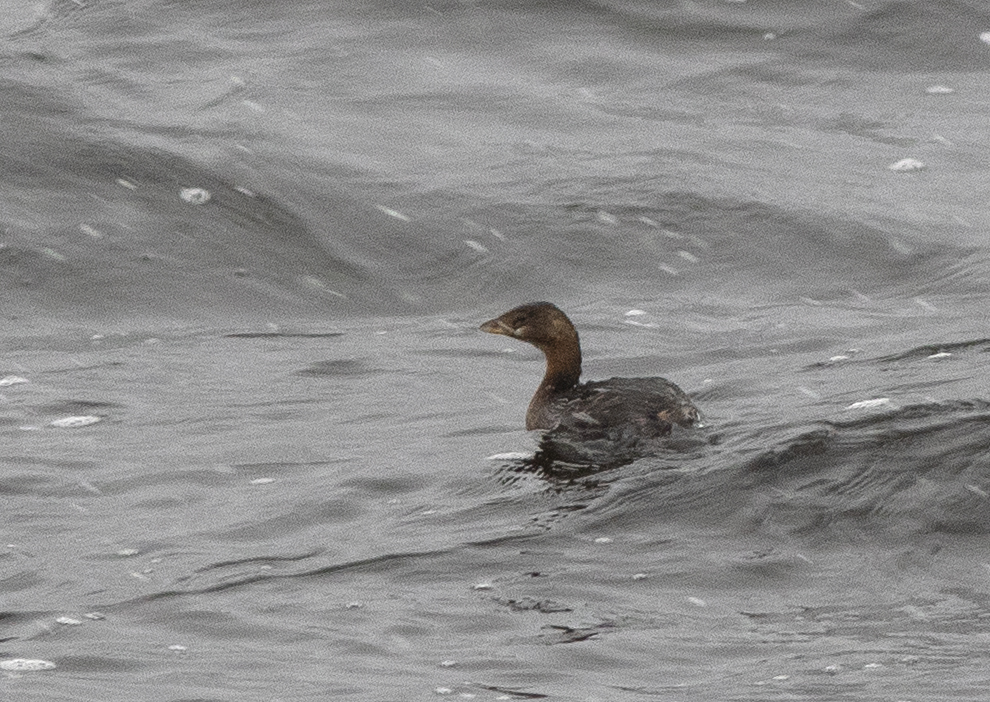 An immature Pied-billed Grebe among the snowflakes on Nicola Lake. We recorded five of this species on the lake. Photo: © Alan Burger 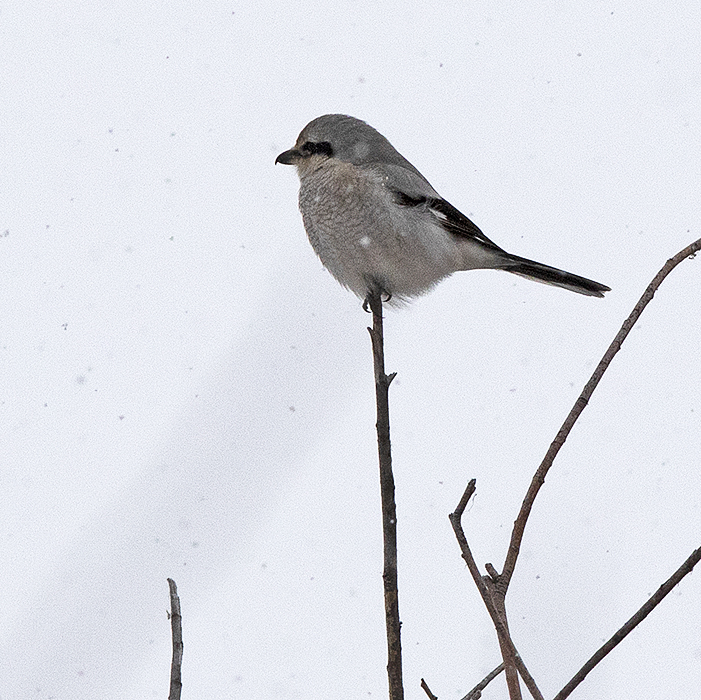 A Northern Shrike on a typical high perch, looking out for small birds or mice that are its prey. Photo: © Alan Burger 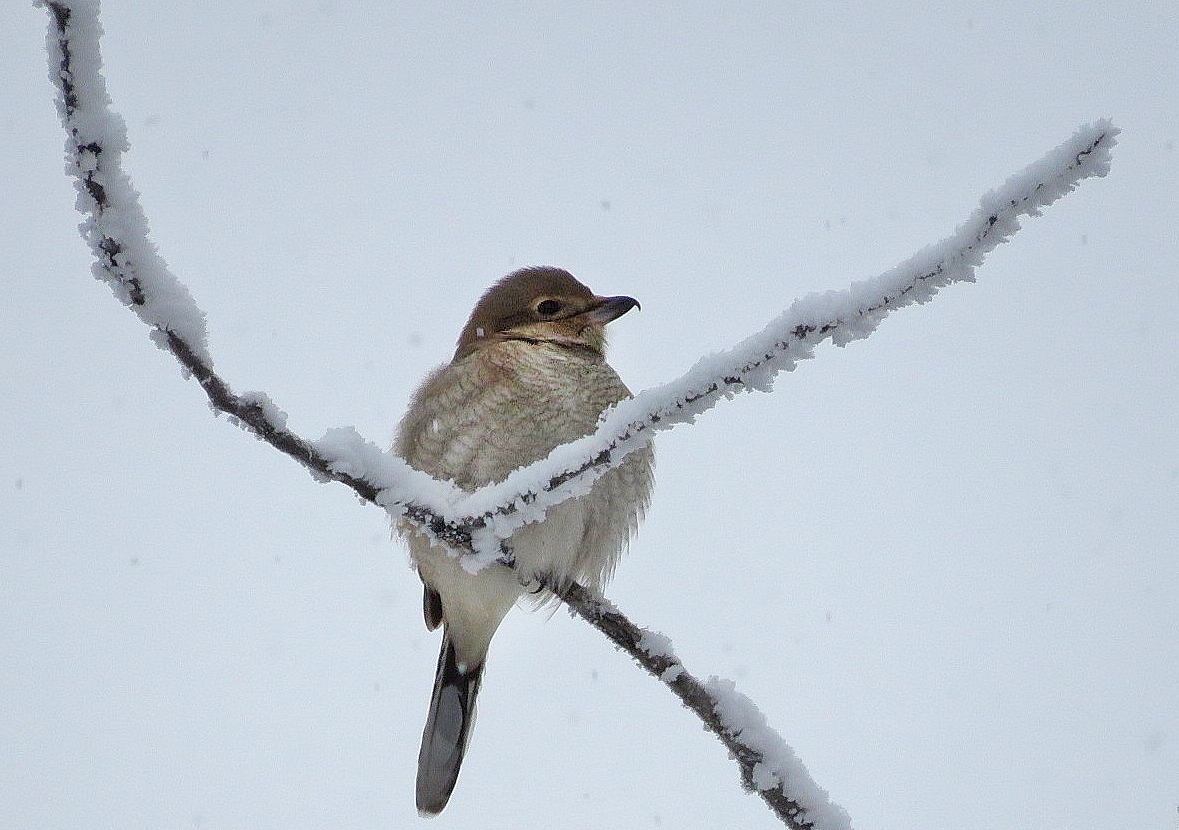 Another Northern Shrike – this one a juvenile bird – on a frosty branch in the Merritt area, 17 December 2022. Photo: © Loekie van der Wal.

On the downside, we missed a few of our regular species:

And a few other species were seen in low numbers:

And did we mention that we saw a lot of Mallards on the count day? 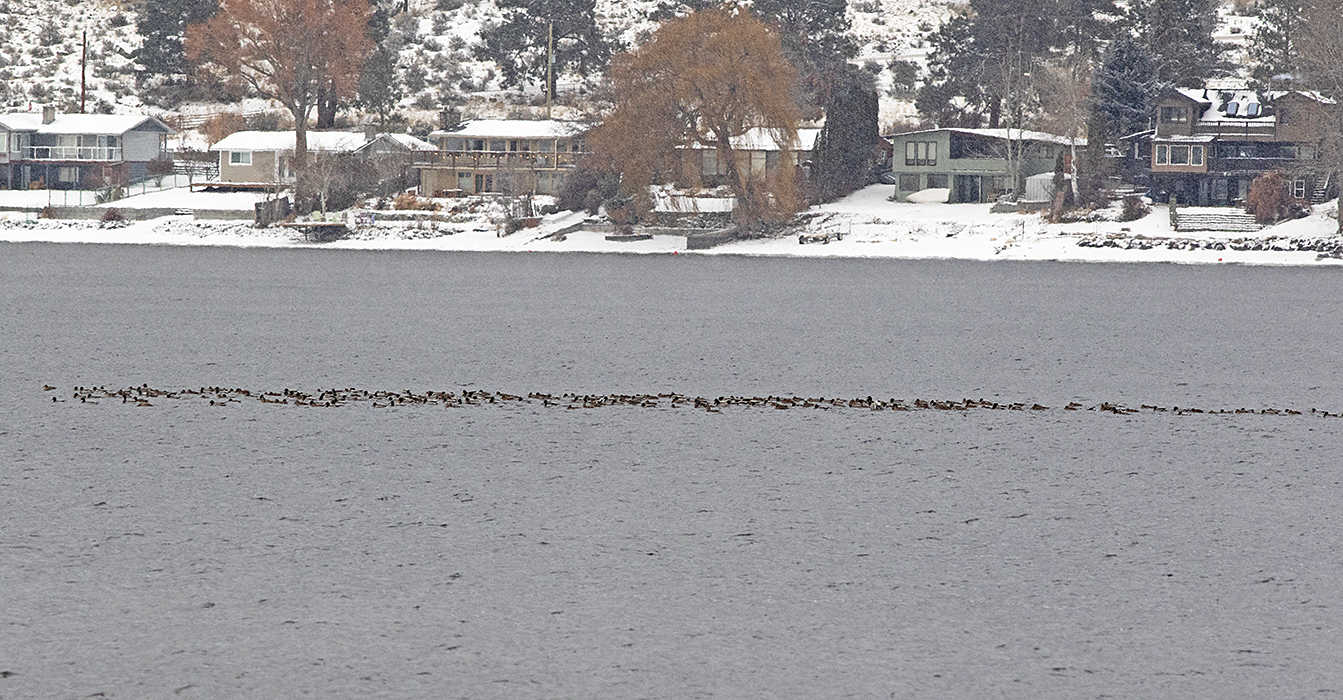 One of several huge flocks of Mallards resting on Nicola Lake. These ducks were feeding on the hayfields and feedlots around Nicola village and resting on the lake. Overall we counted 5,199 Mallards. Photo: © Alan Burger

Part of another big flock of Mallards on Nicola Lake, closer to the shore. Photo: © Alan Burger

Another waterbird found in big numbers on Nicola Lake was American Coot.

American Coot on Nicola Lake (they are the little black dots along with a few American Wigeon and Mallards). There were 204 coot in this flock and 48 more were seen elsewhere on the lake. Photo: © Alan Burger

But one lone coot was missing the party …. 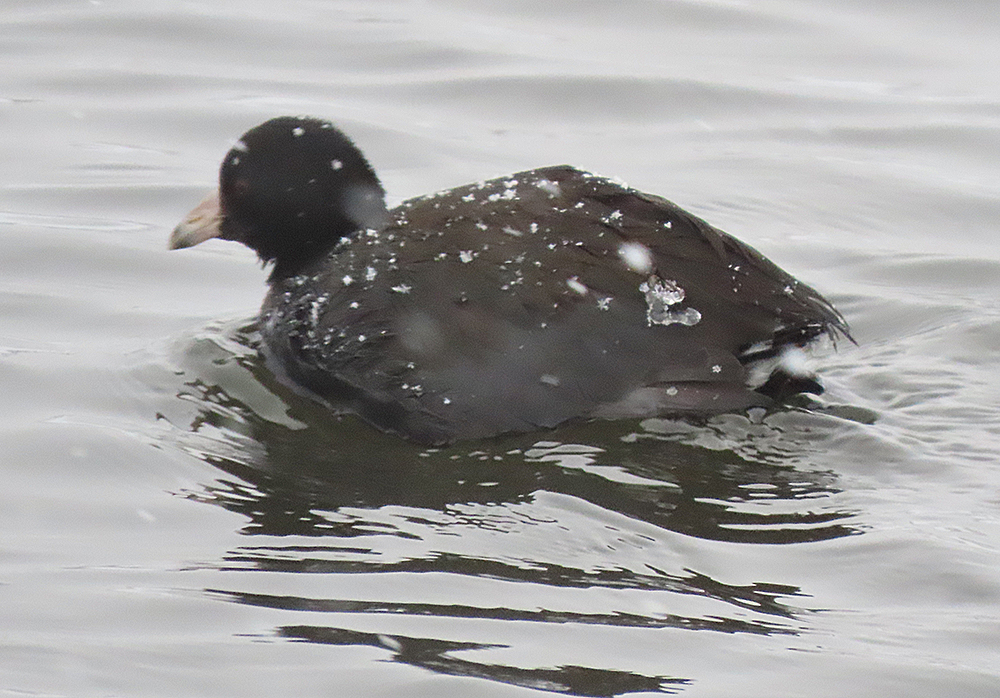 It is always a treat to see Trumpeter Swans on Nicola Lake in mid-winter. We had 27 on the lake this Christmas count. Photo: © Alan Burger

Bohemian Waxwings are another northern species that migrates south into our area in winter, to feed on berries and buds. They have been recorded in all 24 Merritt Christmas Bird Counts and in very variable numbers from 1 to over 2,000. This year we found 670 waxwings. 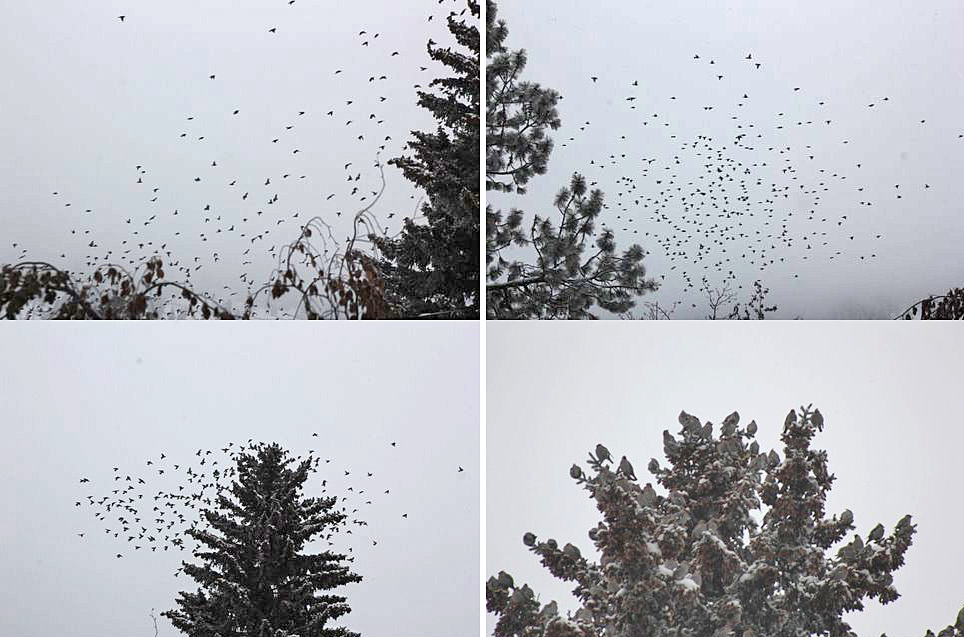 Bohemian Waxwings in a big flock in the Bench area of Merritt, 17 December 2018. Photos © Corinne Pitt 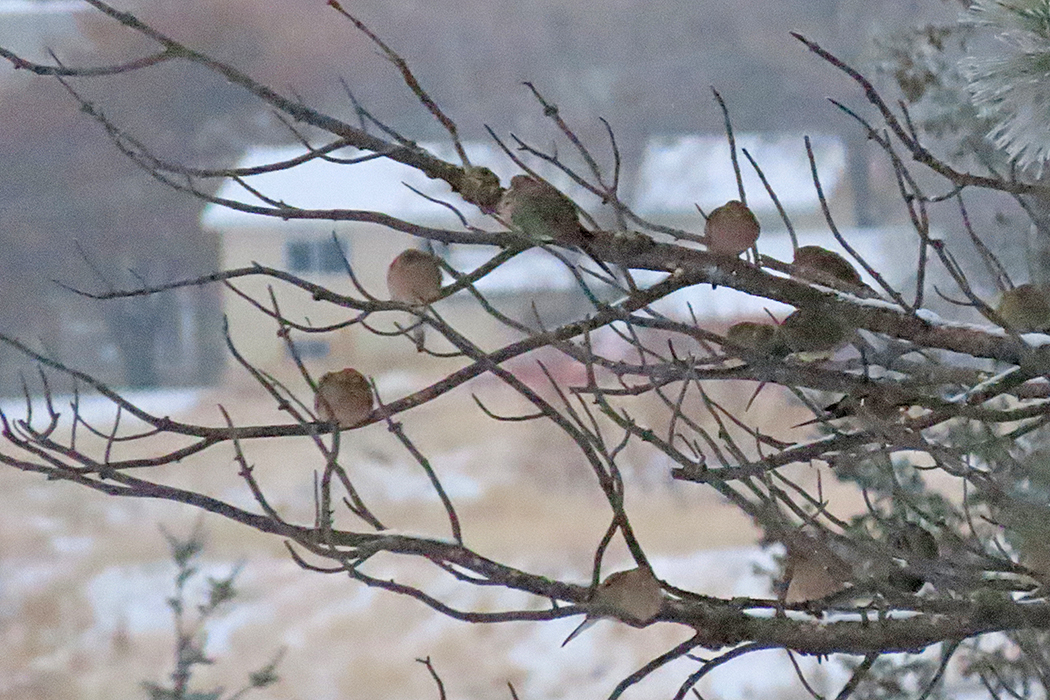 Another regular species that also occurs in variable numbers in the Mourning Dove. This year we recorded 53, below the average count of 96 and well below the record high of 441 doves. Photo: © Vic Newton.

House Finches are common visitors to feeders in Merritt, and have been recorded on all 24 Merritt Christmas counts. This year we found 188, close to the average of 182 birds. Photos: © Corinne Pitt. 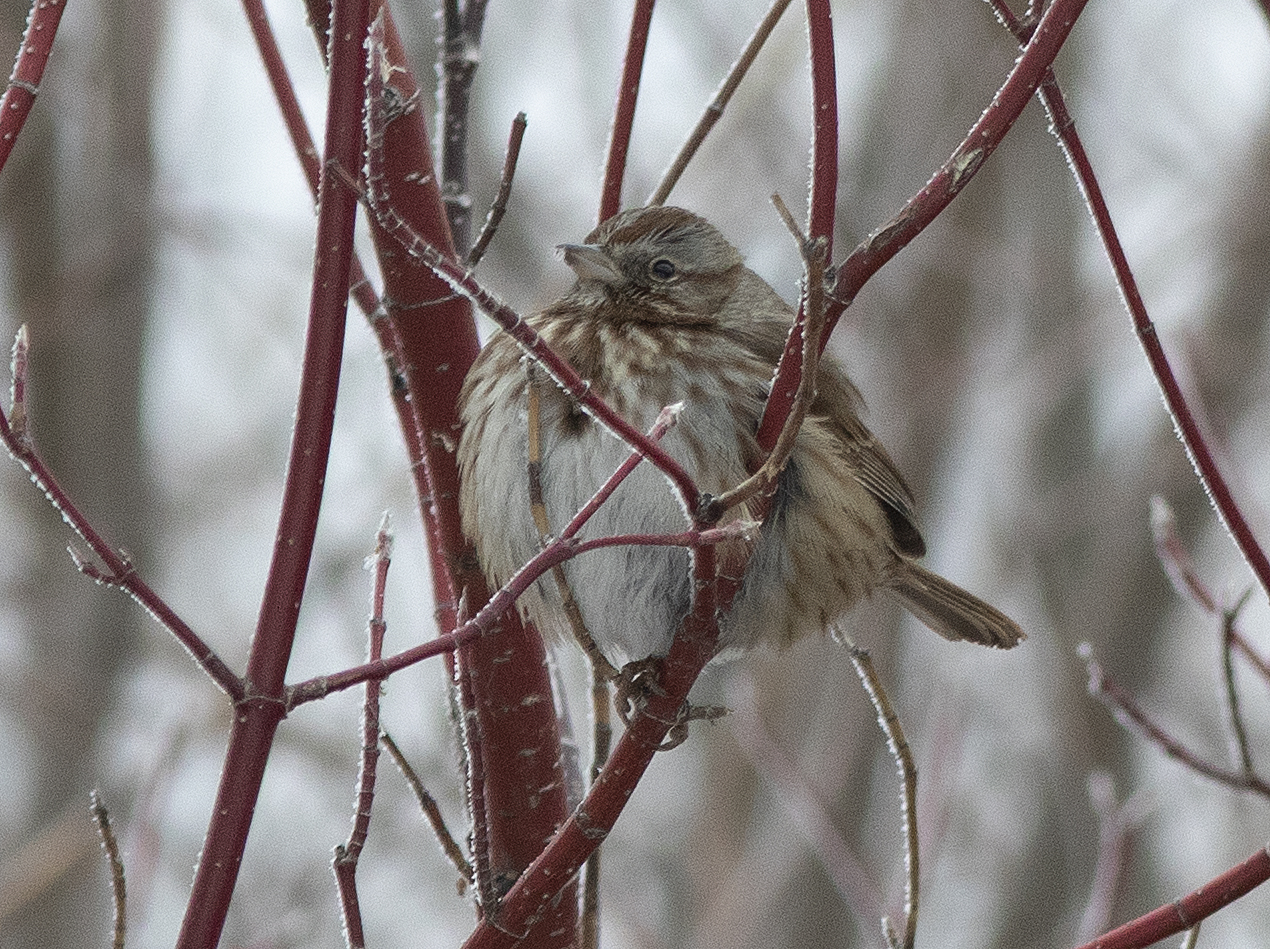 A Song Sparrow, puffed up to tolerate the cold.  Notice the bit of ice on the beak tip. These sparrows breed in our area and a few of them remain through the winter. Photo: © Alan Burger

And finally a word of thanks to the folks who braved the snow and searched out birds in eight zones within the count circle. 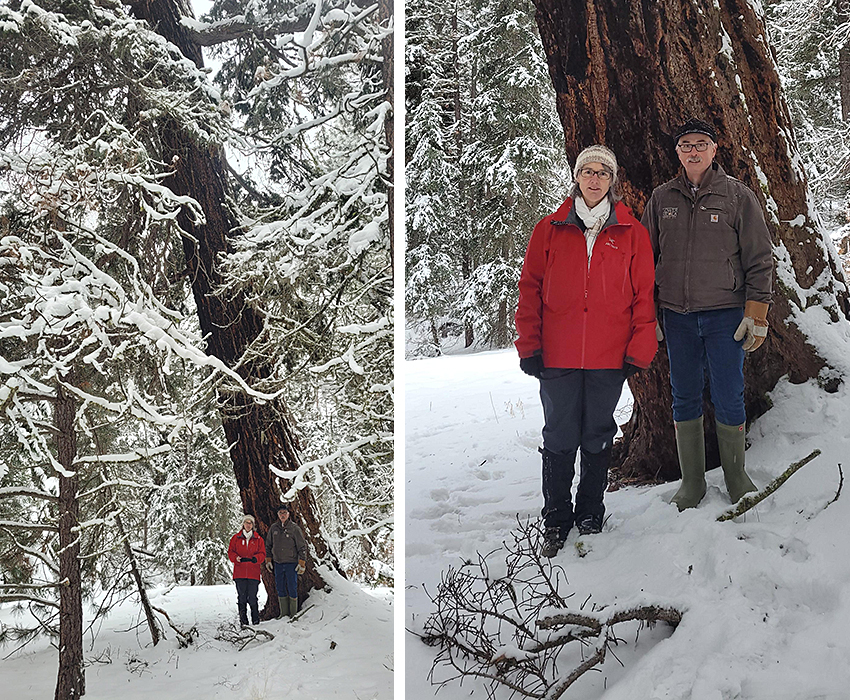 Diana and Bruce among the snowy Douglas-firs on the Lundbom Commonage. Photo: © Frank Ritcey. 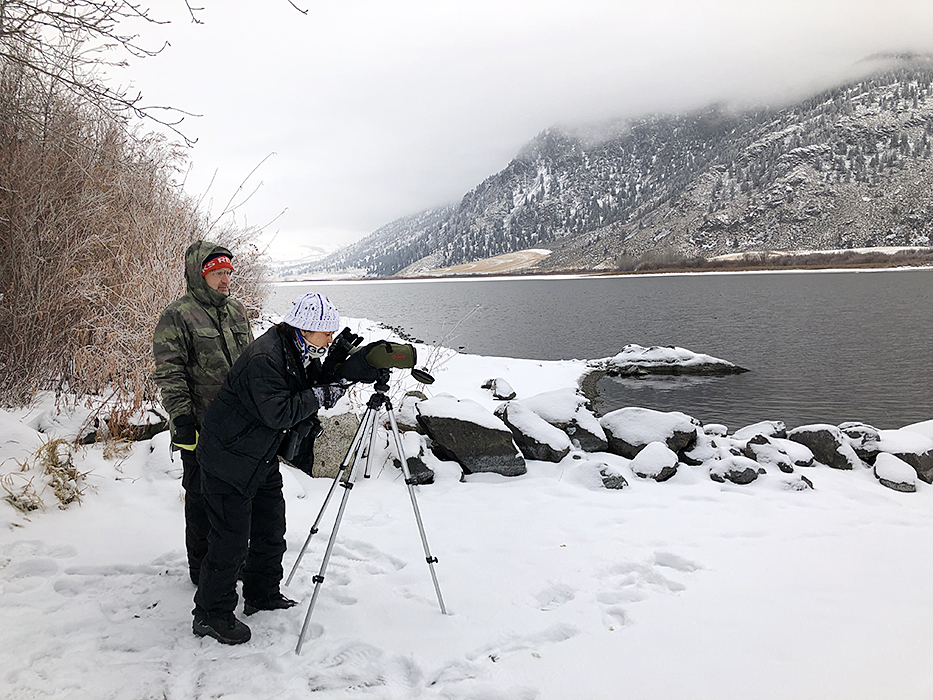 Craig and Loretta scanning for waterbirds on Nicola Lake, before the snowstorm. Photo: © Alan Burger