An eventful Christmas Bird Count this year! Despite the recent frigid weather we had a record number of participants (36 people) and tallied a record number of individual birds (7,026, which is almost double our average count). The number of species tallied – 71 on the count day and three others in the count week – is also well above average and close to the record.

The full data set for this year’s bird count can be seen by clicking here: Merritt Xmas Count data 1995-2016

But the most exciting part of the count was the discovery of a really rare bird for B.C. – a Lesser Goldfinch. Sharp-eyed Vic Newton first noticed this unusual bird as he and the others in Liis Jeffries’ group were checking out the Colletville area. Vic’s daughter Jennifer then managed to get this good photo using her iPhone focused through a spotting scope. Various experts later identified this as a Lesser Goldfinch. There have been only about 20 records of this species in British Columbia ever. At this time of year it should be in Mexico, California or coastal Oregon. It was first seen among a flock of the American Goldfinches – a common resident of the Merritt area and a regular in the Christmas Bird Count. The discovery of this Lesser Goldfinch in Merritt caused excitement in the BC birding scene and many hard-core birders are likely to come to Merritt to tick it off. The bird was later seen by others in the week following the CBC. 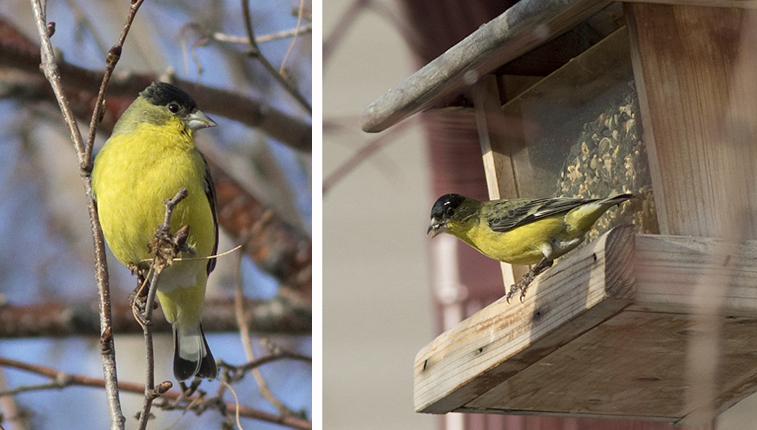 Other unusual species found this year: 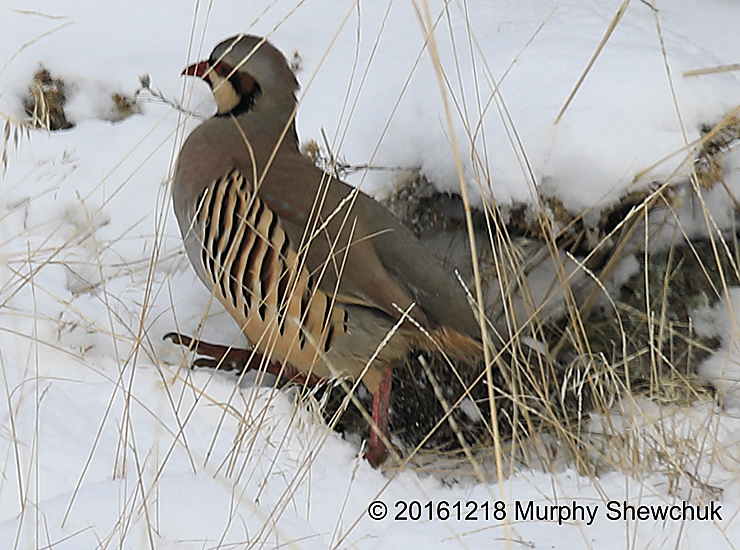 A Chukar – one of a covey of 6 found near Harmon Estates on the Merritt Christmas count. This introduced Himalayan partridge has fluctuating populations in our area. Photo: ©Murphy Shewchuk 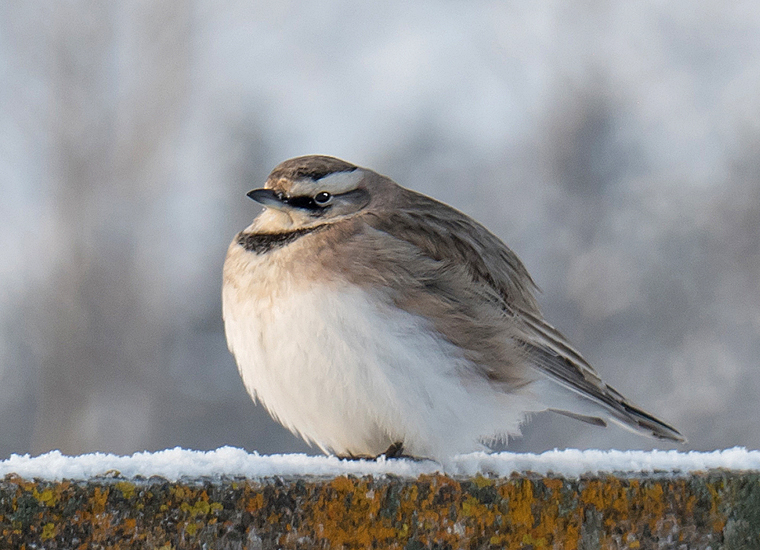 Horned Lark at a feedlot near Nicola village on 18 December 2016. The pale plumage shows that this is a migrant from the far north and not the local breeding race of this species. Photo: © Rick Howie 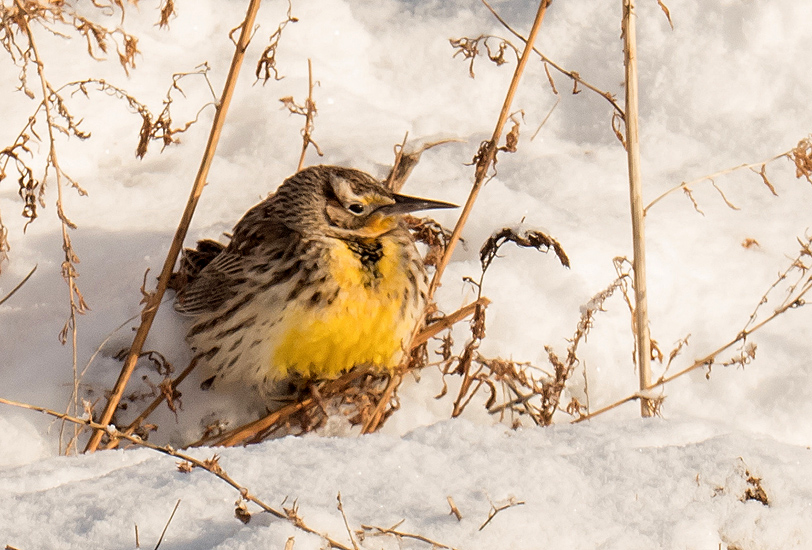 Record high counts were reported for many bird species this year, including: 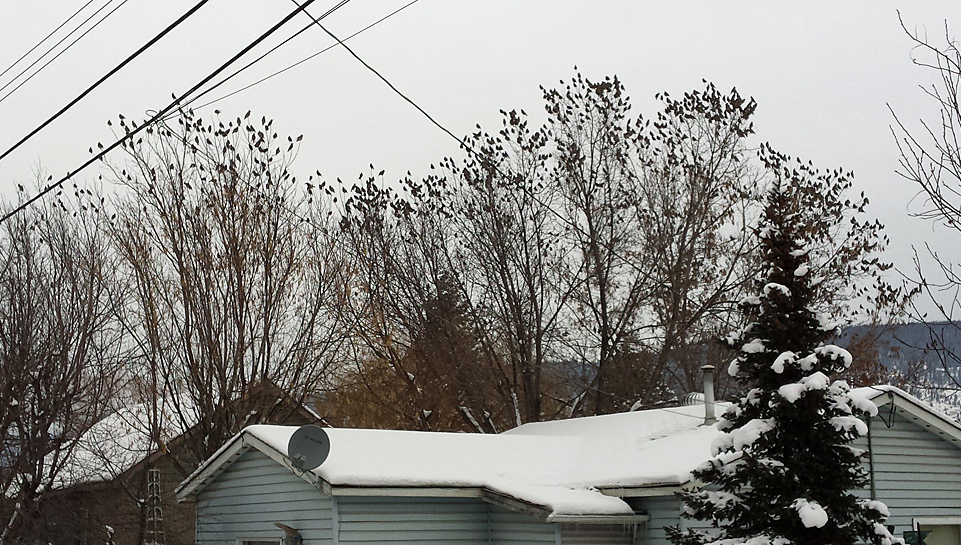 Part of the huge flock of Bohemian Waxwings, estimated to be 1,500 birds, in Diamondvale in the late afternoon. Photo: ©Jennifer Newton 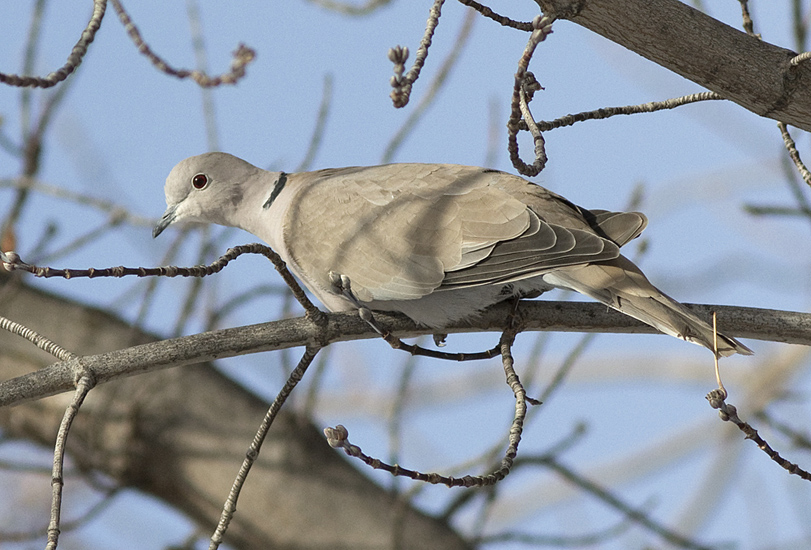 Eurasian Collared Dove – this introduced species was unknown in Merritt before 2009 but is now increasing here and across southern BC. Photo: ©Alan Burger

Raptors were especially common this year with high counts for these species:

We failed to find any Merlin this year – the first time in 12 years that we missed this species.

One feature of this year’s count was the great variety in plumage types for the Red-tailed and Rough-legged Hawks. Groups often had to look very carefully to identify the species, especially since both of these hawks were often found in the same open fields. Here are a few samples of the hawks seen on the 18th. 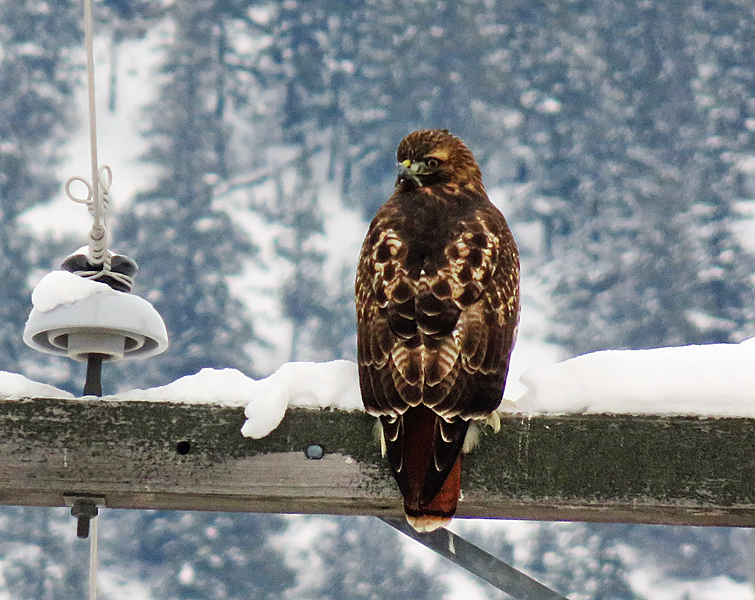 A dark Red-tailed Hawk with the reddish tail indicating that it is an adult bird. Photo: ©Bonny Kozub 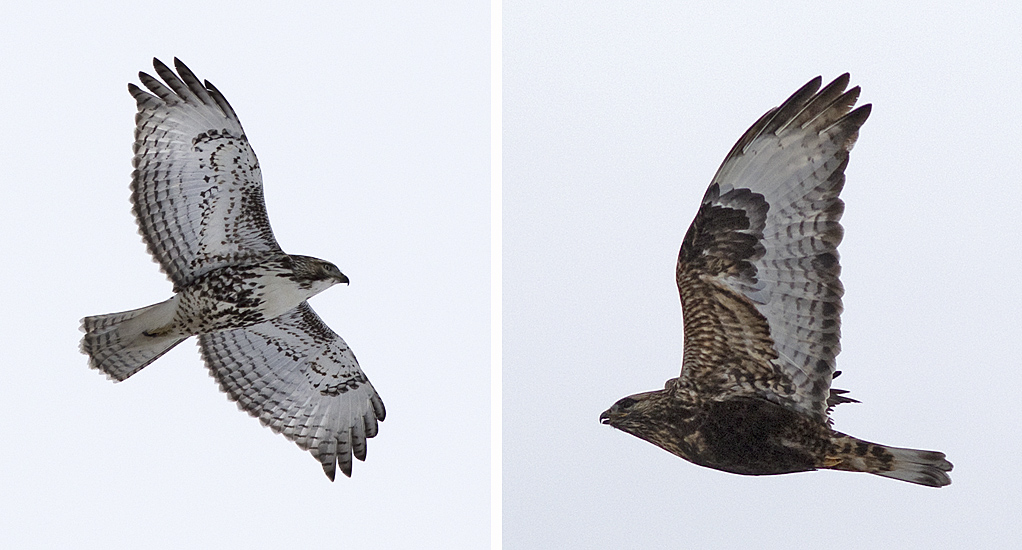 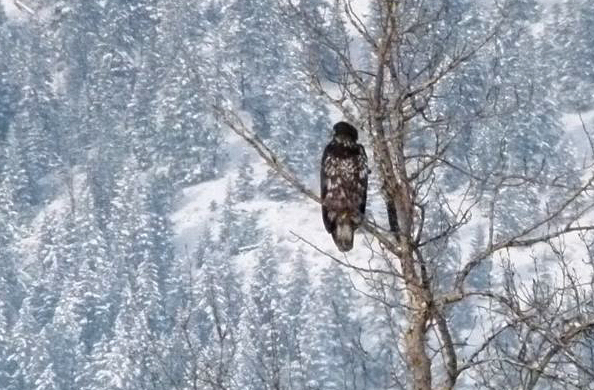 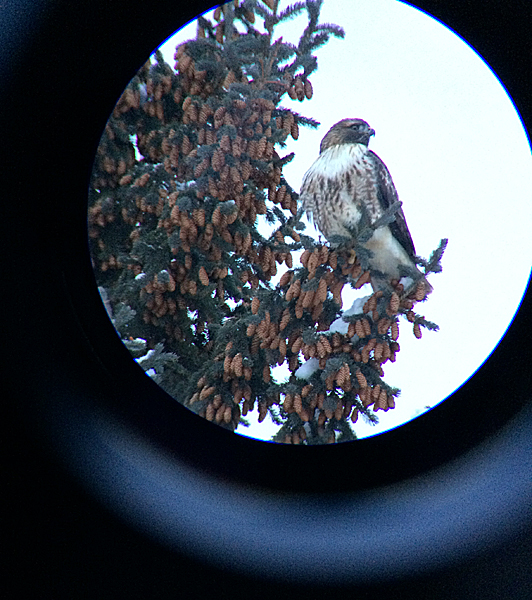 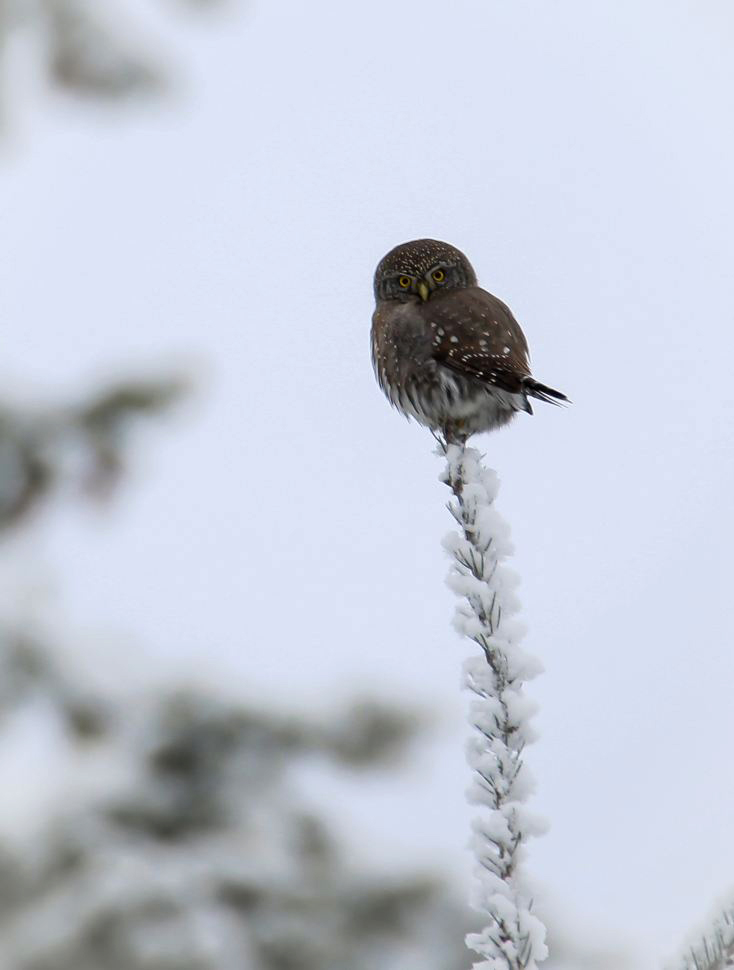 Of course, part of the enjoyment of a Christmas Bird Count is being outdoors with good company and sharing interesting wildlife experiences. 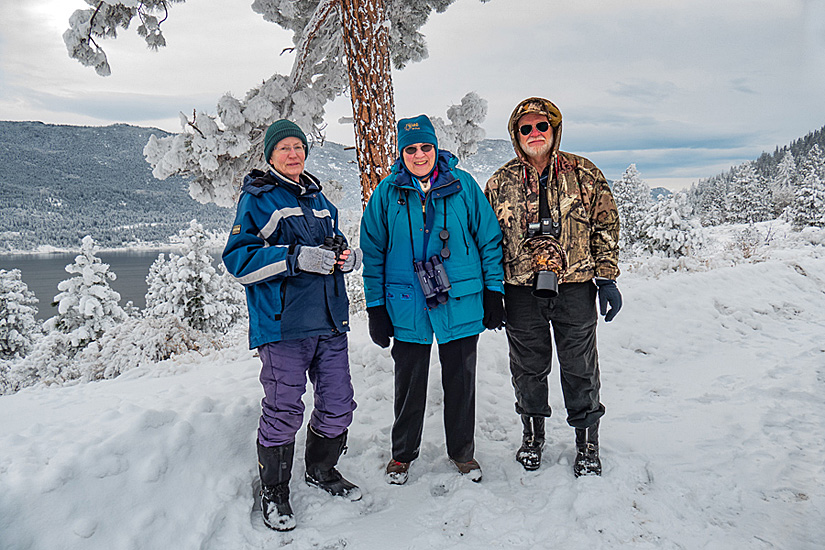 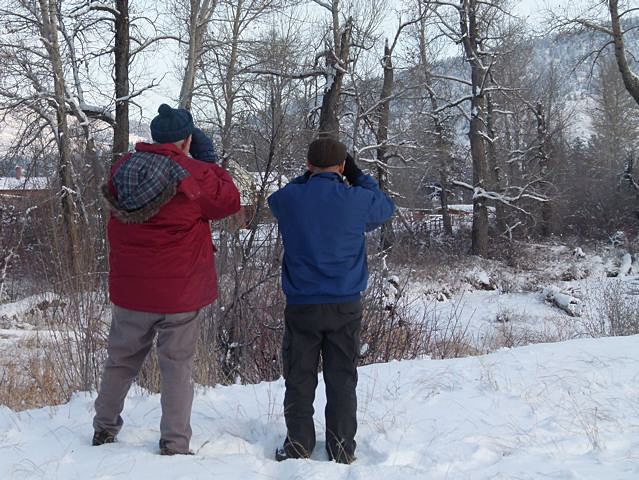 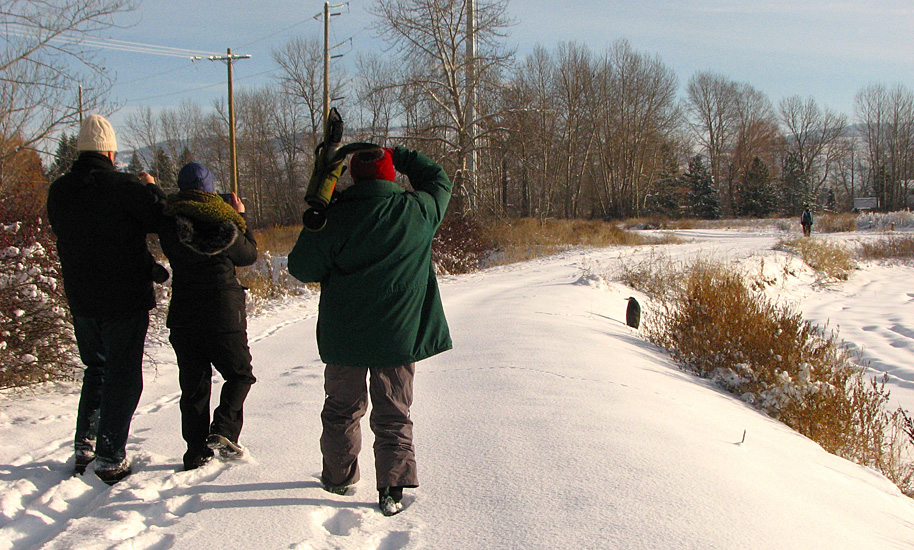 Creeping up on a Great Blue Heron at the Merritt settling ponds. Photo: ©Anne Pang 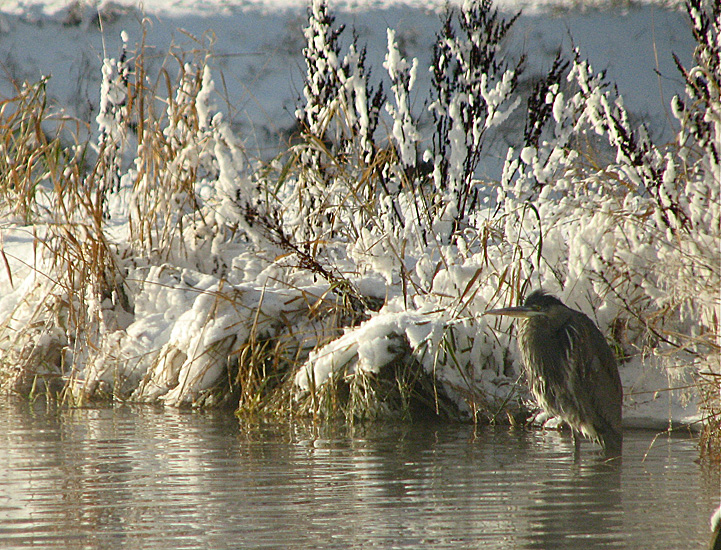 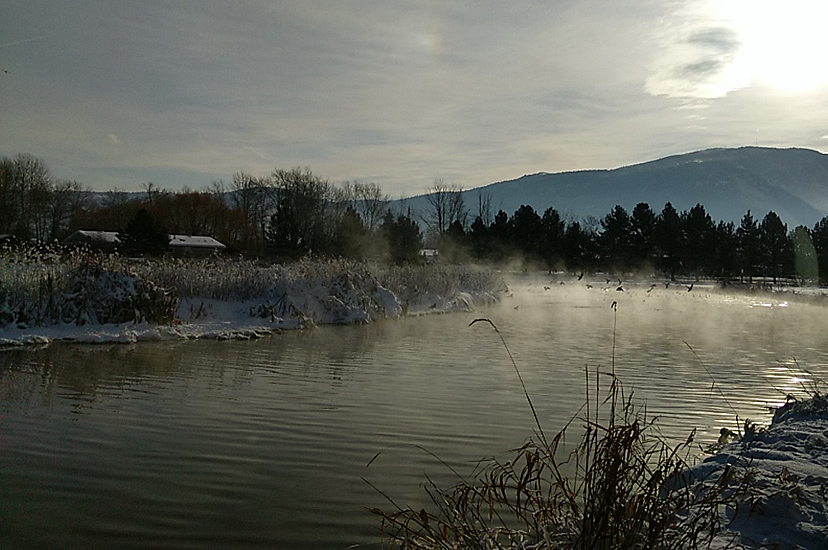 Ducks in the mist at the Merritt settling ponds. Photo: ©Anne Pang 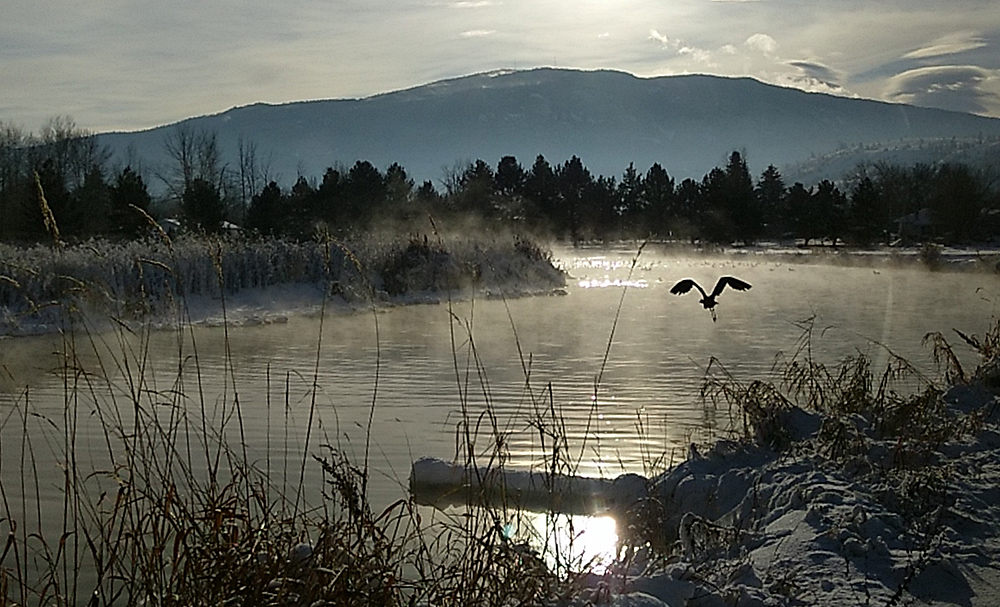