When we decided to run the 2021/22 Merritt Christmas Bird Count on December 18th we knew we would have a low participant turnout and be unable to access parts of our count circle. Just weeks before, Merritt was hit by devastating flooding and several of our regular count participants were still dealing with severe damage to their homes. And the flooding  wrecked the sewage settling ponds on the edge of town, which were a regular site for interesting waterfowl.

On count day we had 17 people in the field and 2 feeder-watchers, far less than our usual 30-35 people in the field. Despite fewer people, and some nasty cold, snowy conditions we did well. Our species count was 59 on count day – very similar to the 23-year average of 61 species. And we actually set a new record for birds counted – 7,126 which is almost double the average. This high count was due to high numbers of Coot, Mallards, blackbirds, doves and pigeons (see below). 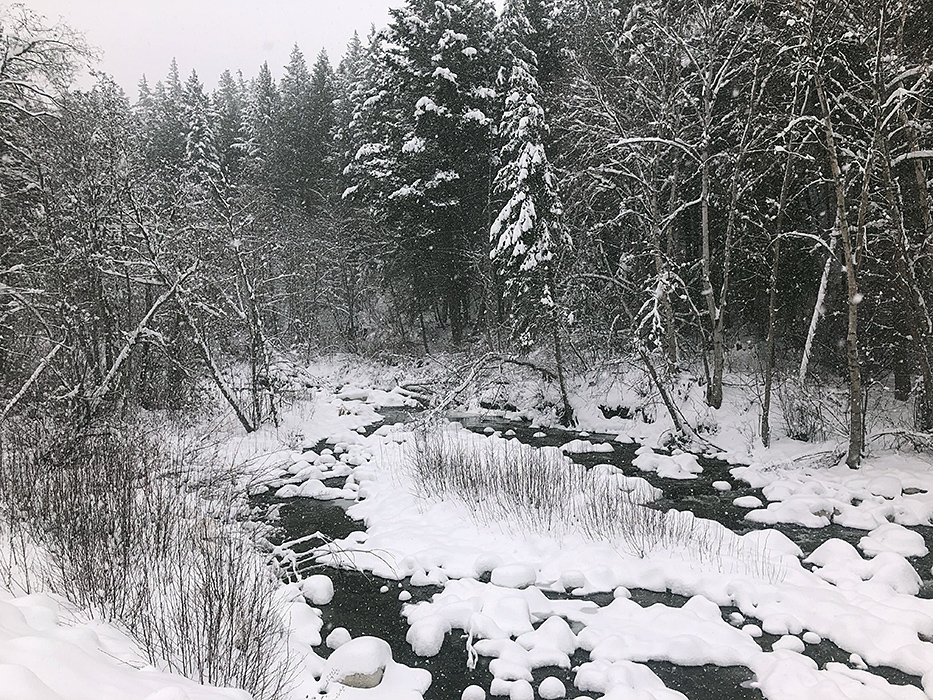 This photo of Mill Creek indicates the conditions for much of the Merritt CBC count day – cold and snowy. Photo: © Alan Burger

Perhaps the most unexpected discovery on our count was the huge flock of American Coot found on Nicola Lake. See if you can guess how many coot are in this photo (plus a few American Wigeon and Gadwall).

This huge flock of American Coot was found on Nicola Lake during the Merritt CBC. There were probably another 100 birds not in the photo. There are also some American Wigeon and Gadwall among the coots. Photo: © Rick Howie.

American Coot is not always found on the Merritt count – it has appeared in 15 of the past 23 counts. One coot was missing the Nicola Lake party – it was seen on the Nicola River in town. This year’s count of 1,118 birds is a new record high.

By dividing up the flock we could get an estimate of the numbers. There were at least 1017 coots in the photo and an estimated 100 more outside the photo. Photo: Rick Howie.

Here’s another view of the huge flock of American Coot on Nicola Lake. Look closely and you can see two Bald Eagles in the air – they prey on coots and cause the coots to cluster together in tight flocks. Photo: © Rick Howie.

No new species were added to the Merritt count circle, but a few unusual species did show up: 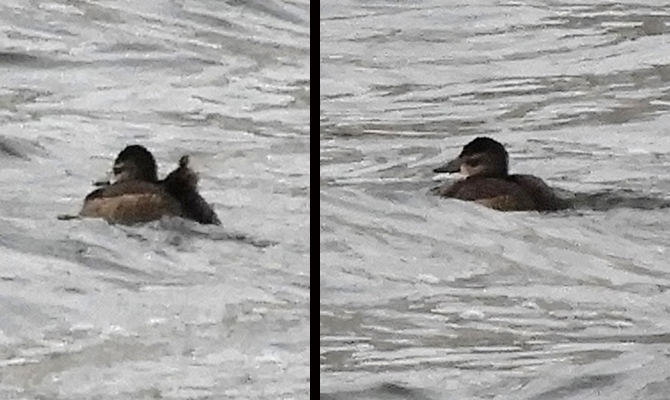 Fuzzy photos of a distant Ruddy Duck on Nicola Lake. The diagnostic line through the face and the vertical stiff tail feathers are, however, visible. Photos: Alan Burger

As always, there were a few BIG MISSES – species that we almost always get that failed to show up this year:

Here are some photos from the count period. Photography was tricky with the gloomy conditions and falling snow for much of the day. 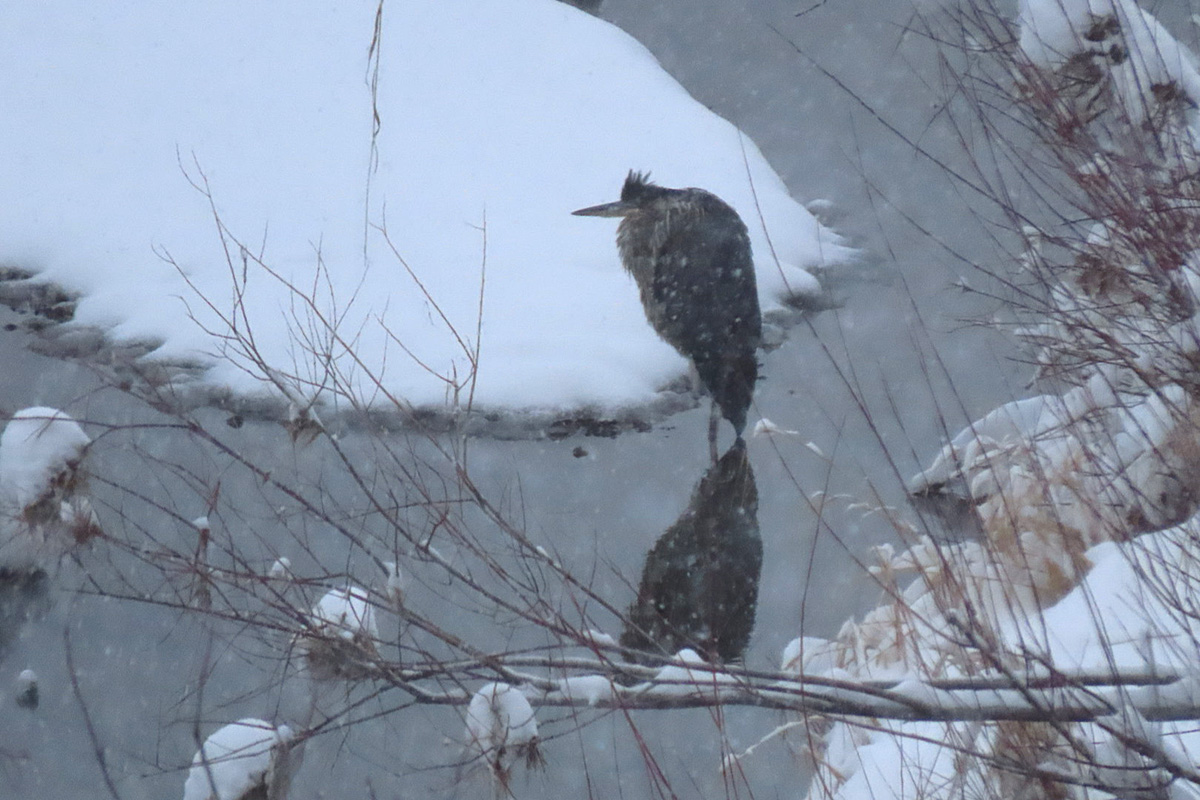 This photo captures the mood on the Merritt count day – a Great Blue Heron on the icy Nicola River amidst falling snow. Photo: © Vic Newton. 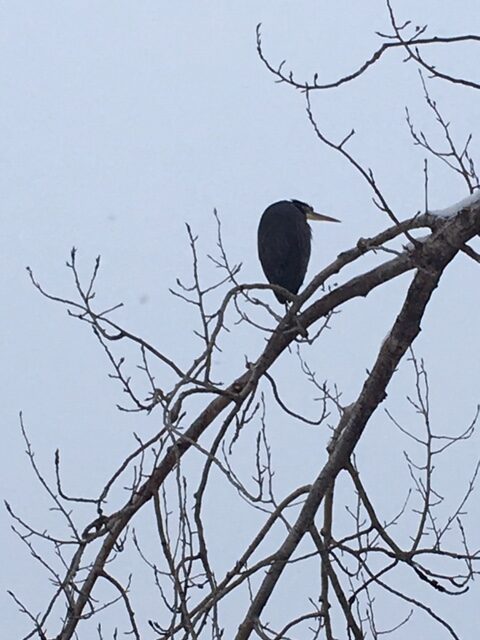 Another Great Blue Heron hunched up and tolerating the weather. Photo: © Paul Willms. 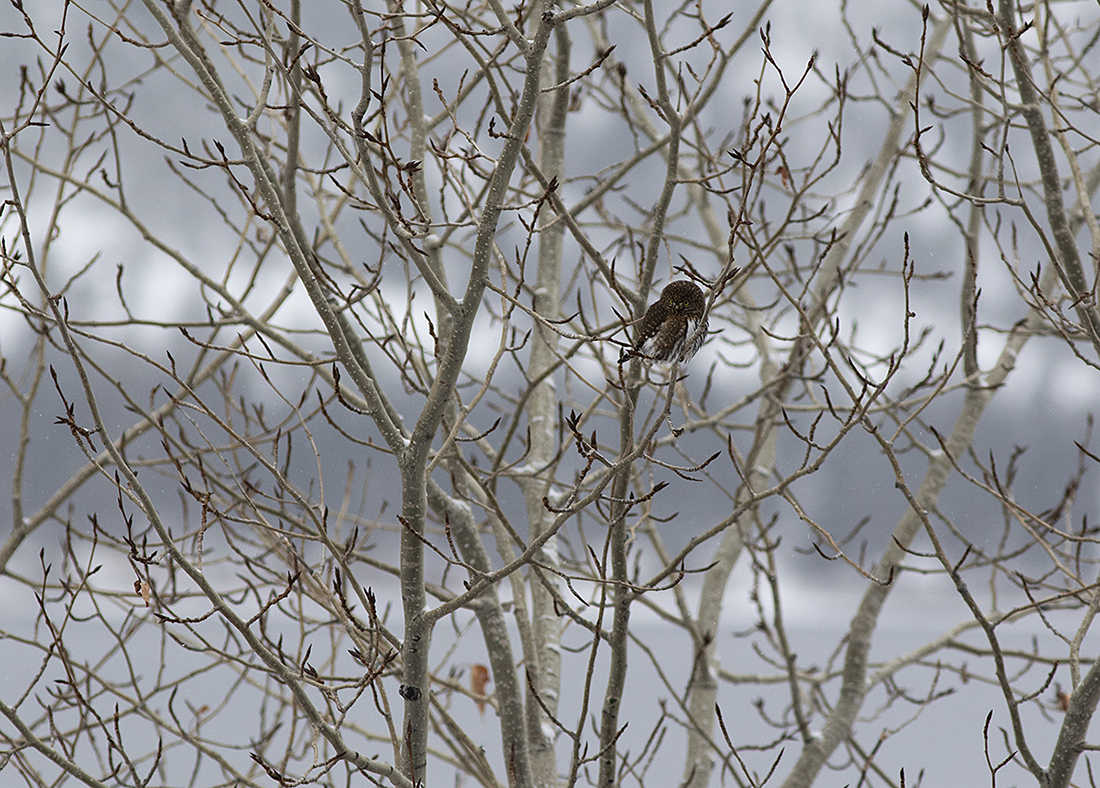 This lump in a tree turned out to be a tiny Northern Pygmy-owl. Photo: © Alan Burger 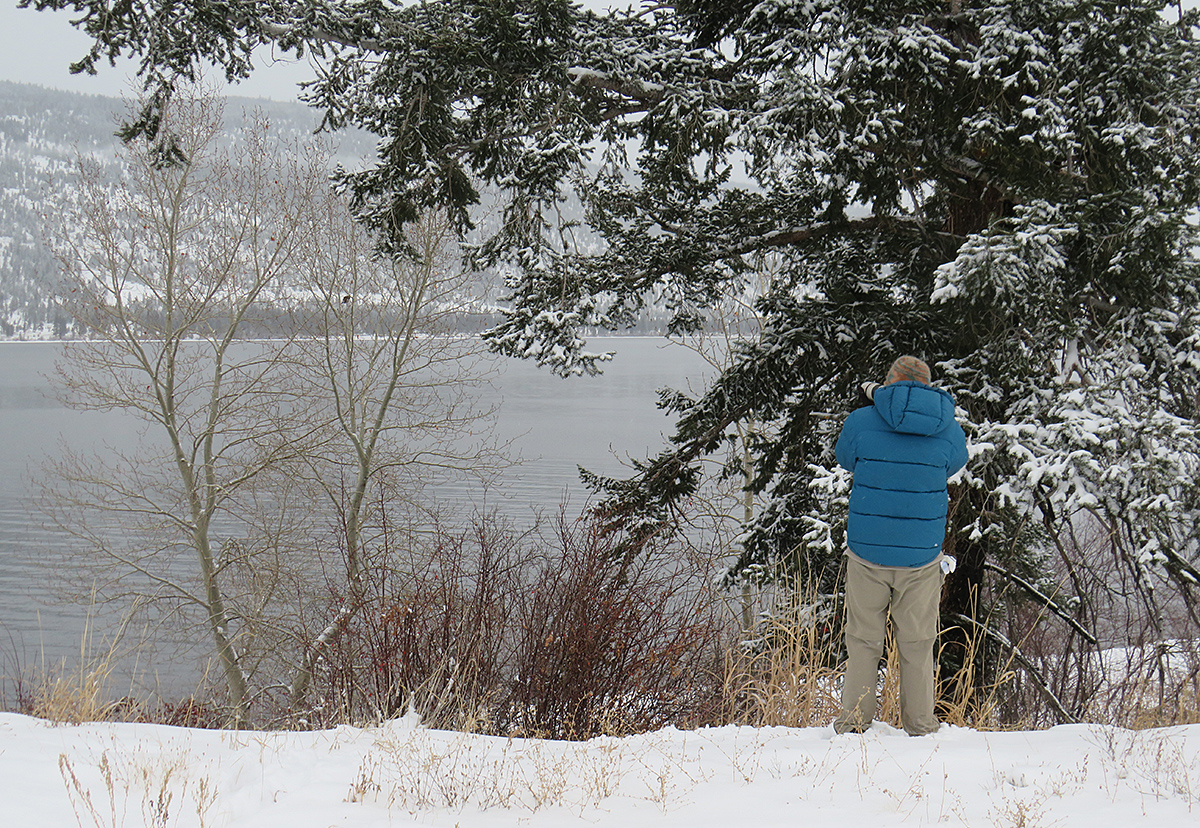 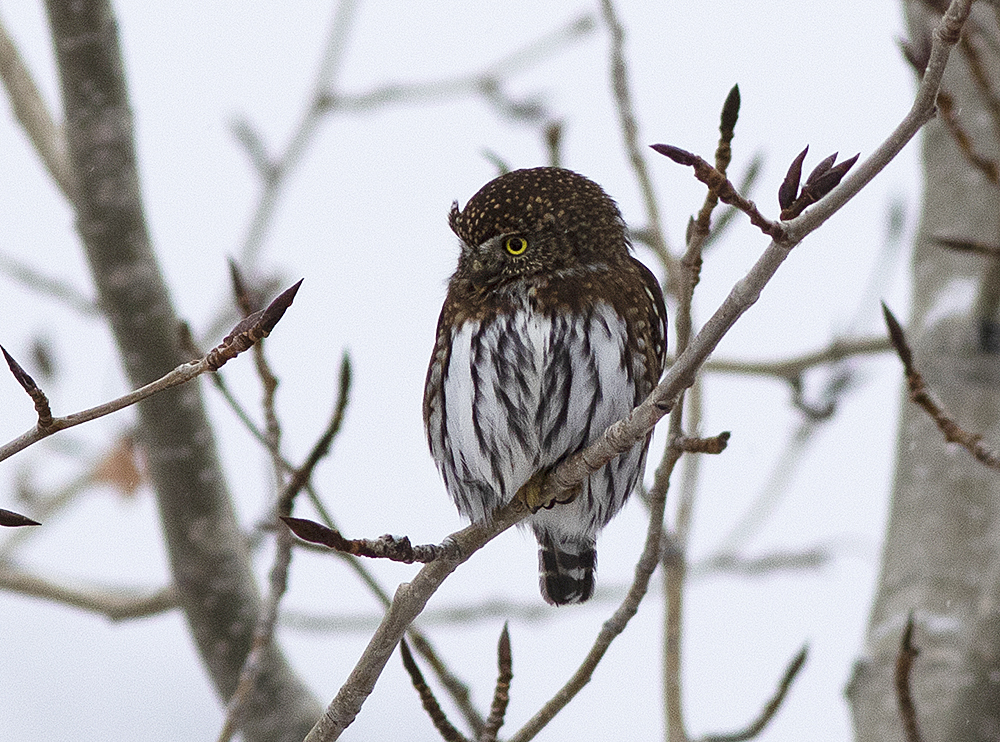 A closer look at the Northern Pygmy-owl. Notice the little feather tufts on its forehead. Photo: © Alan Burger 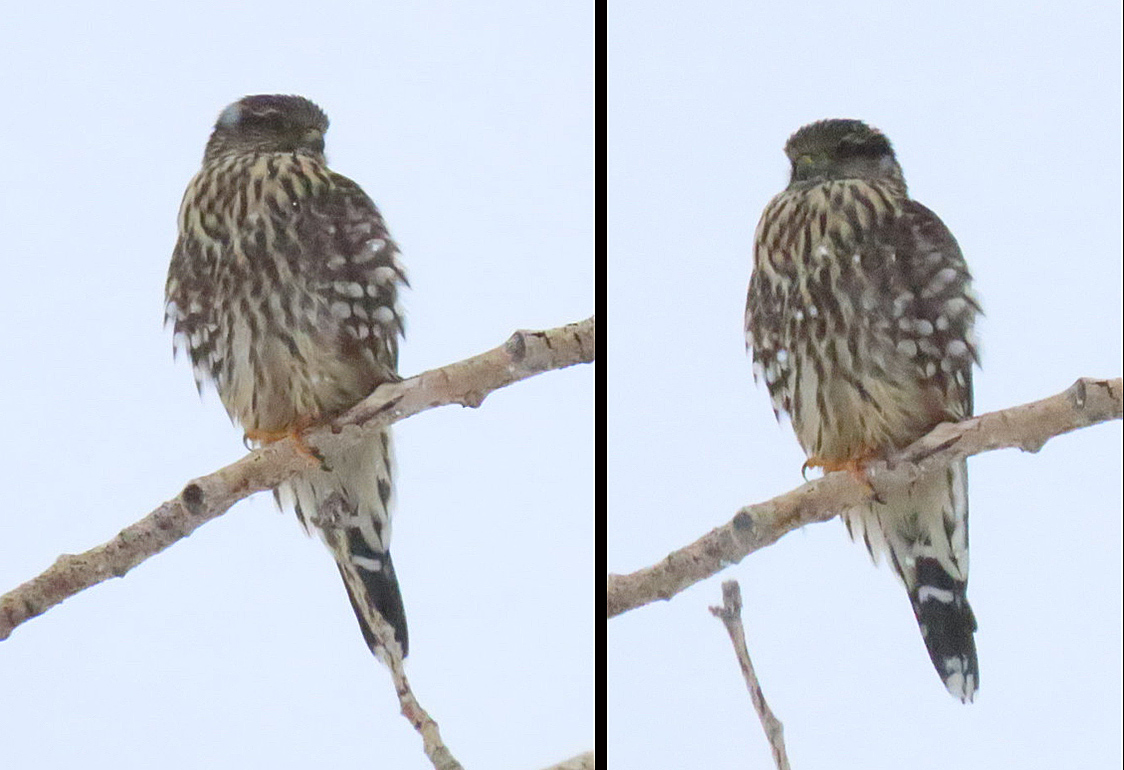 This Merlin was the only one recorded on the Merritt Christmas Bird Count, 18 December 2021. Photos: © Vic Newton

Guess how many Bohemian Waxwings are in this tree. Answer below. Photo: © Alan Burger

Our record high for Bohemian Waxwings in the Merritt count is 2,009 birds. This year we had only 290. In the photo above there are 123 birds. Most people would underestimate this flock. 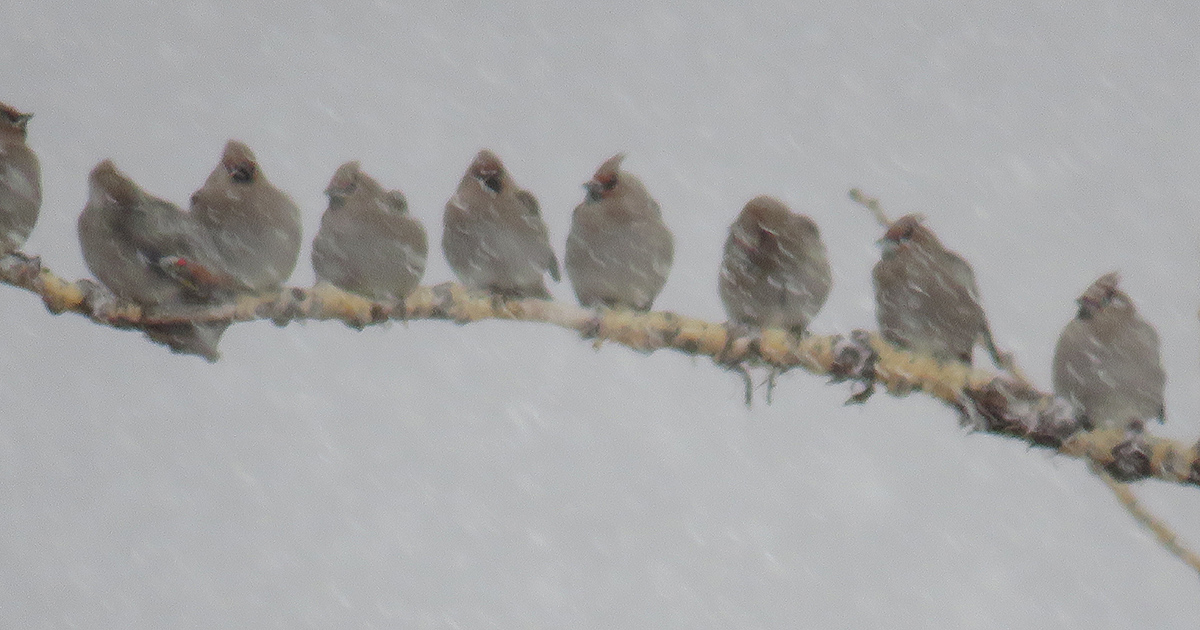 Blizzard birds! These Bohemian Waxwings visit us in winter from their northern breeding grounds, so they might be used to tough weather conditions. Photo: © Loretta Holmes. 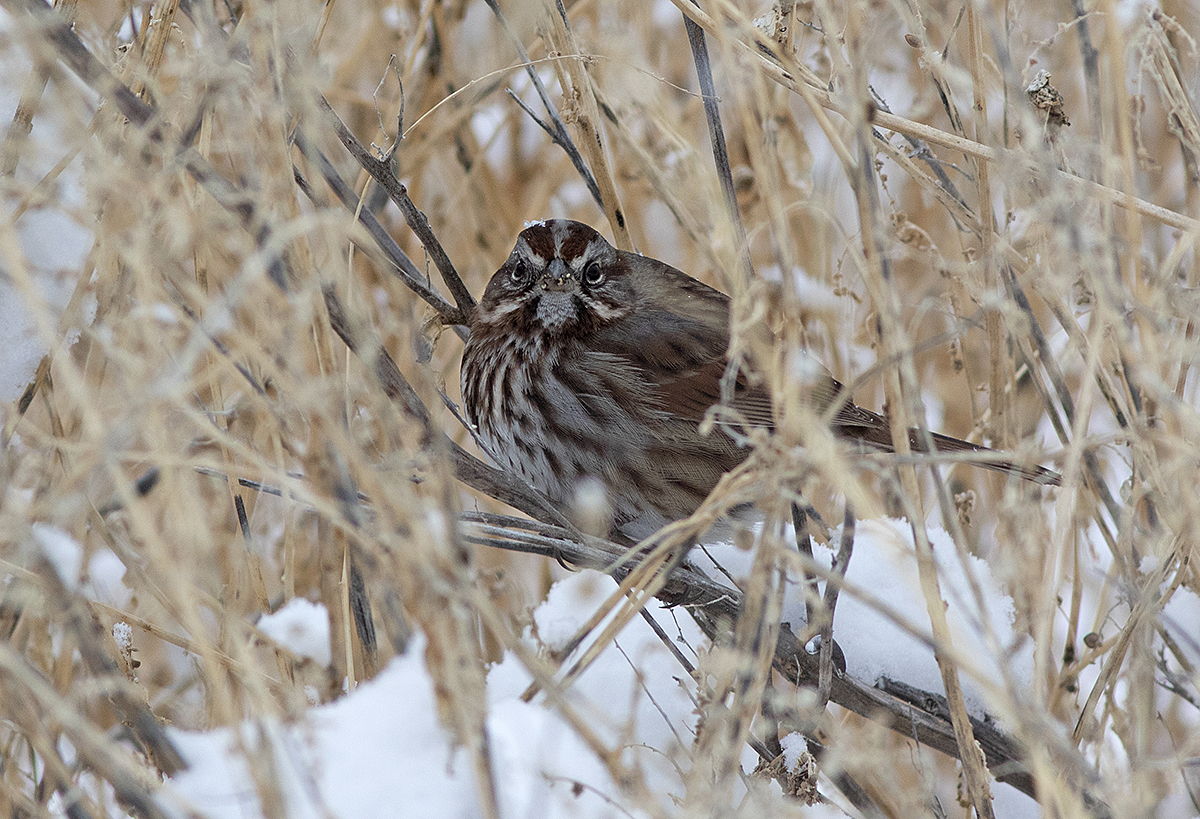 Fluffed up to tolerate the cold, this Song Sparrow was one of 38 seen on the Merritt count. Photo: © Alan Burger 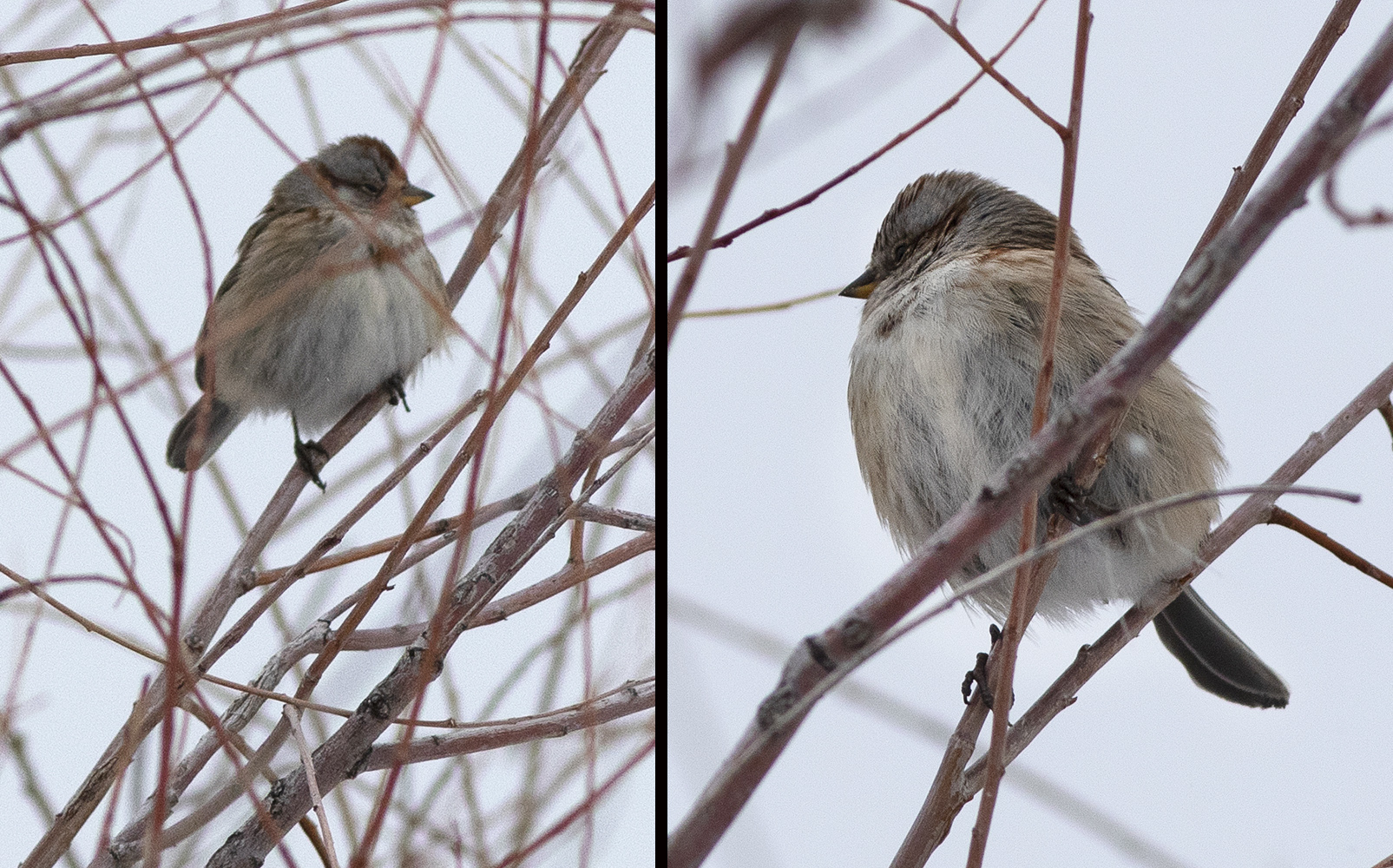 American Tree Sparrows are winter visitors to our area, coming south from their Boreal and Arctic breeding grounds. They have been recorded in fewer than half of the 23 Merritt counts, but this year we had 29 birds, close to the record high of 33 birds. Photos: © Alan Burger

It was a low year for finches, apart from the resident feeder-loving House Finches (266 counted – a bit above average). We recorded only one Pine Siskin and 10 American Goldfinches and there were no redpolls, crossbills or grosbeaks. 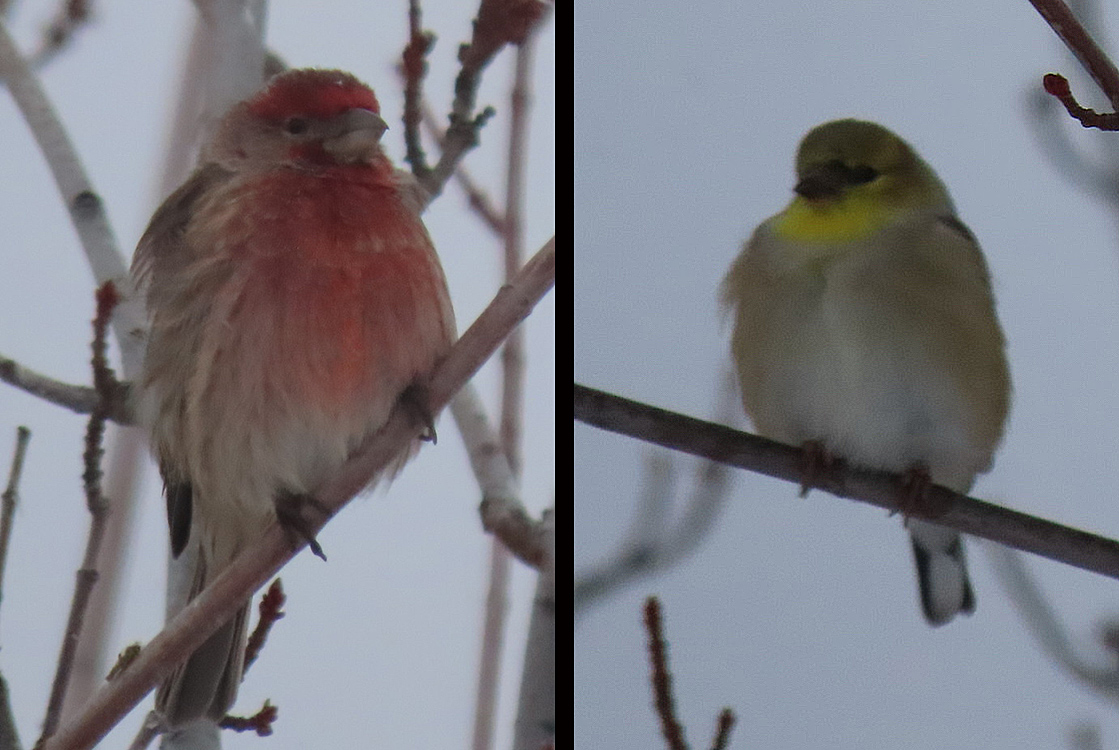 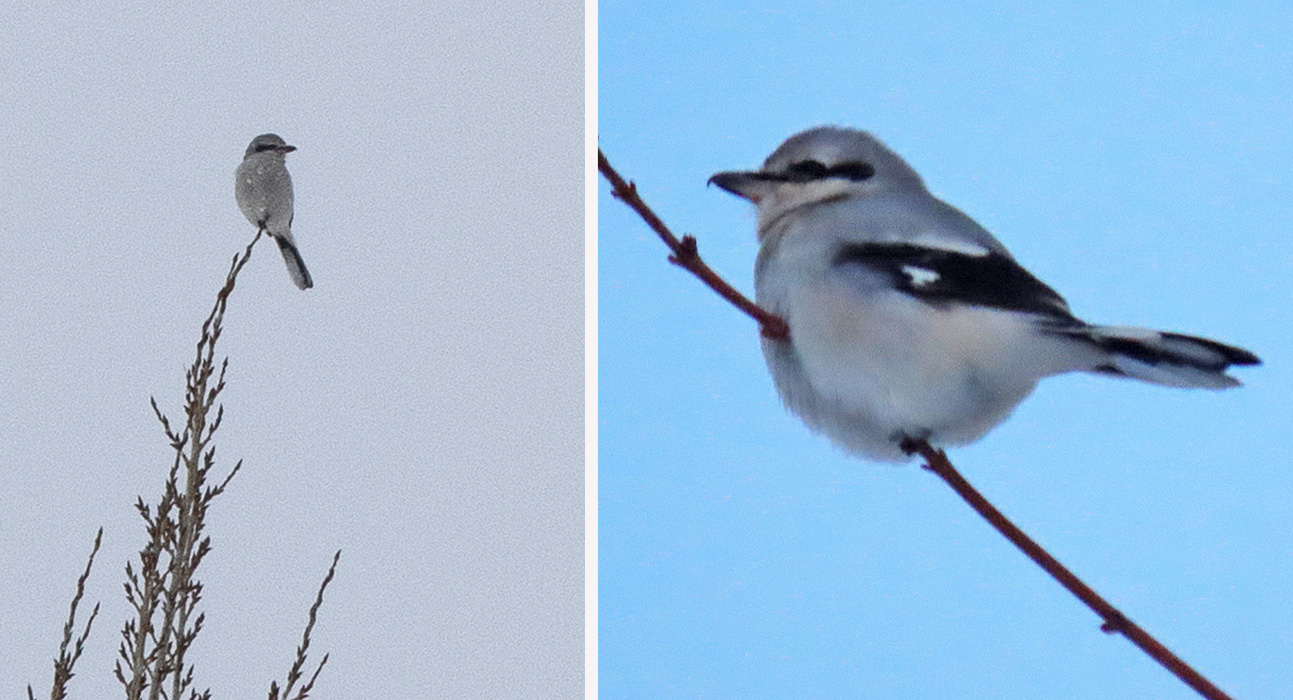 Despite the freezing weather, many of our creeks were still flowing and here we located several hardy American Dippers – a total of 10 (just above average numbers). Watching these tough little birds leap from an ice platform into icy water to find aquatic insects is an amazing experience. 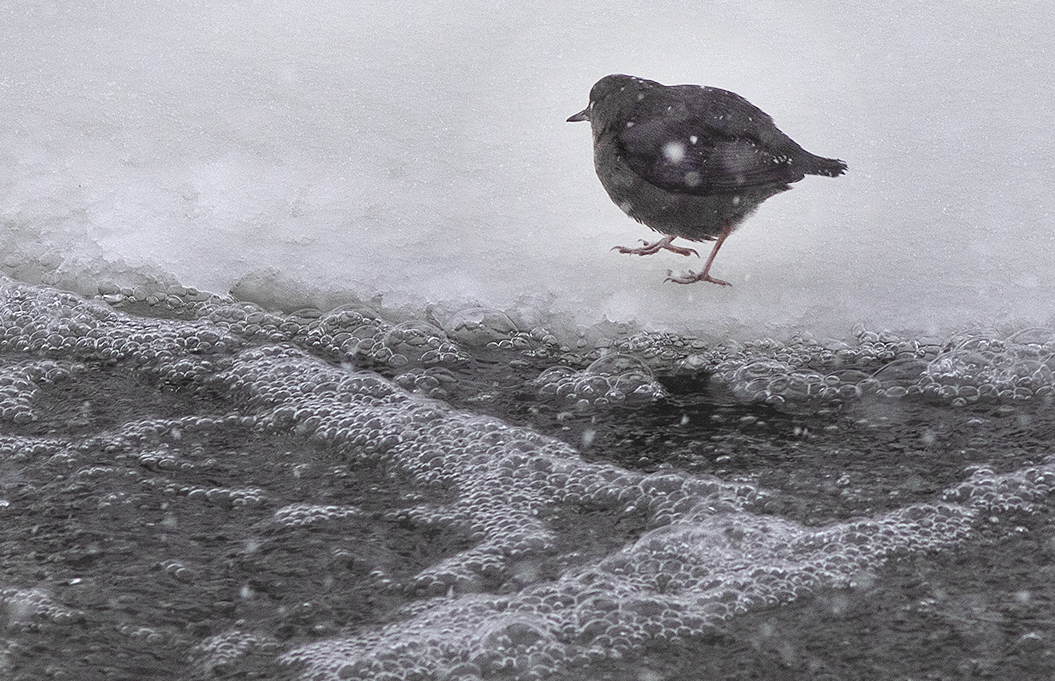 An American Dipper on the ice edge at Mill Creek. How a robin-sized bird can tolerate being on ice and in icy water for hours at a time is quite astounding. Photo: © Alan Burger 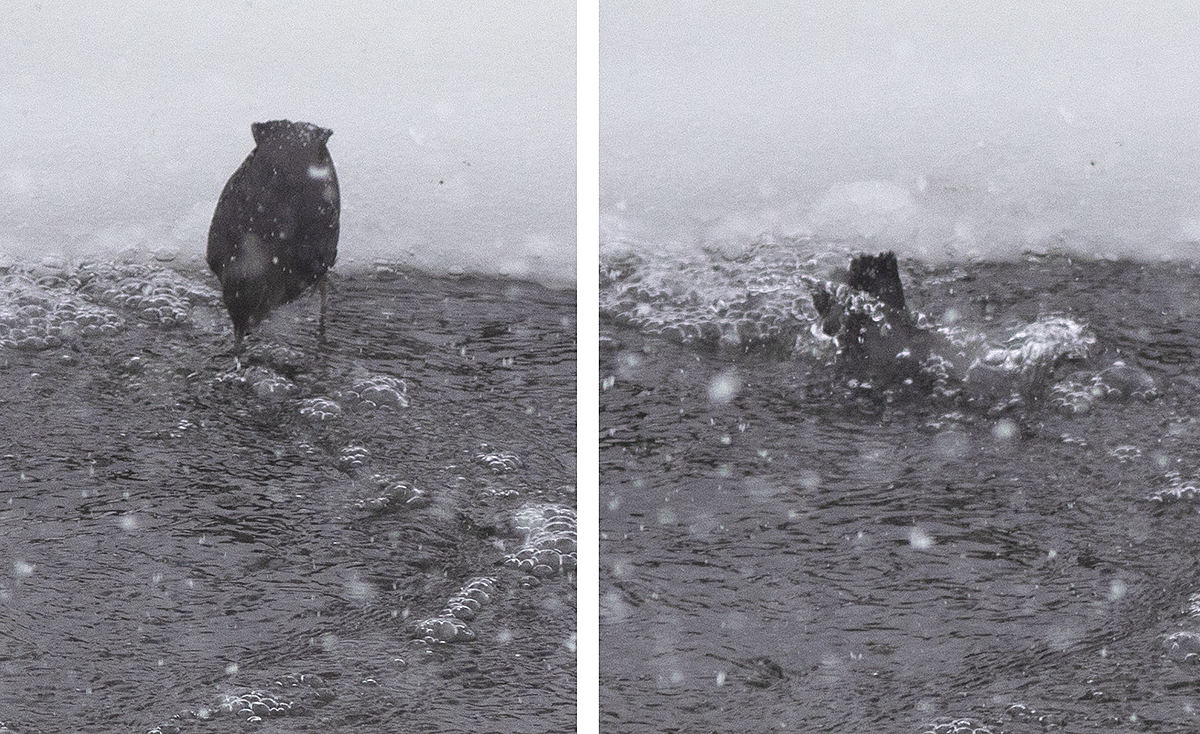 The same American Dipper taking the plunge. This bird would remain submerged for 10-15 seconds and then leap back on to the ice to rest briefly between dives. Photos: © Alan Burger

Here are a couple of owls that we missed on the count day but were seen in the count week. 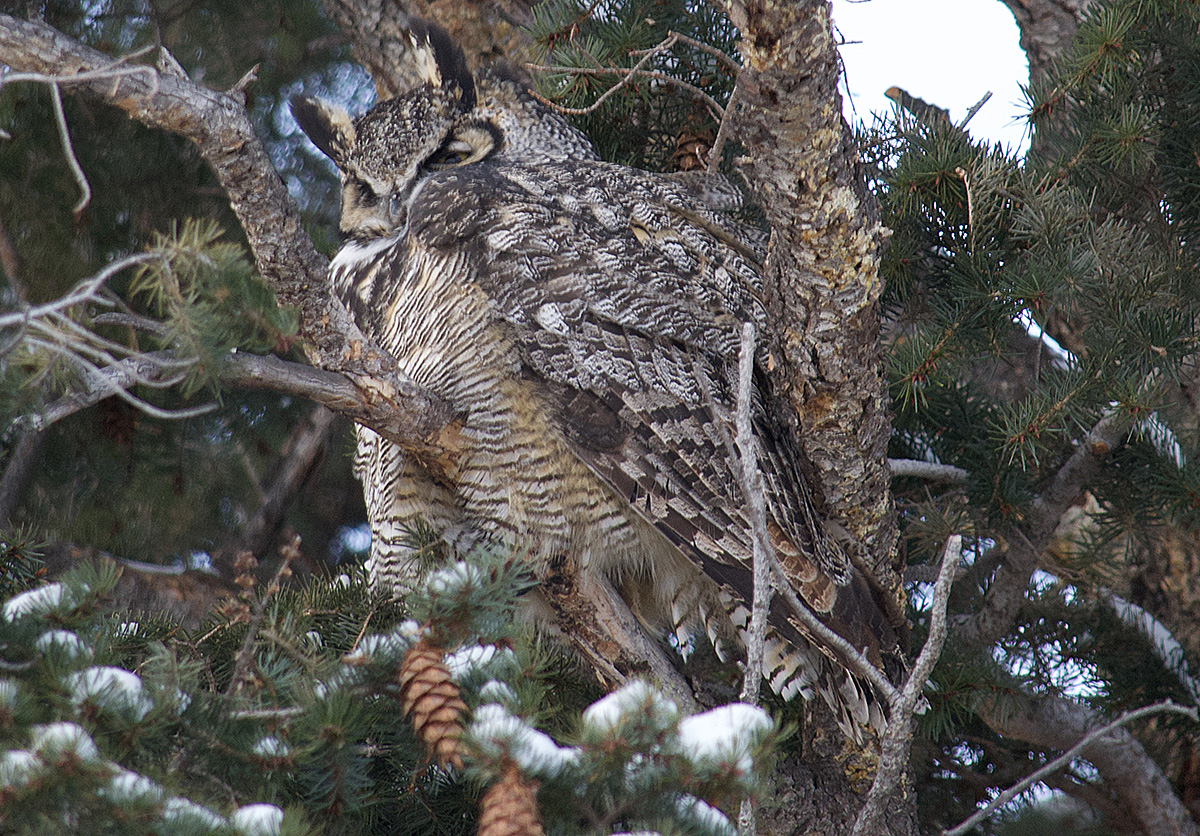 A Great Horned Owl seen in the count circle within the Count Week. Photo: © Paul Willms. 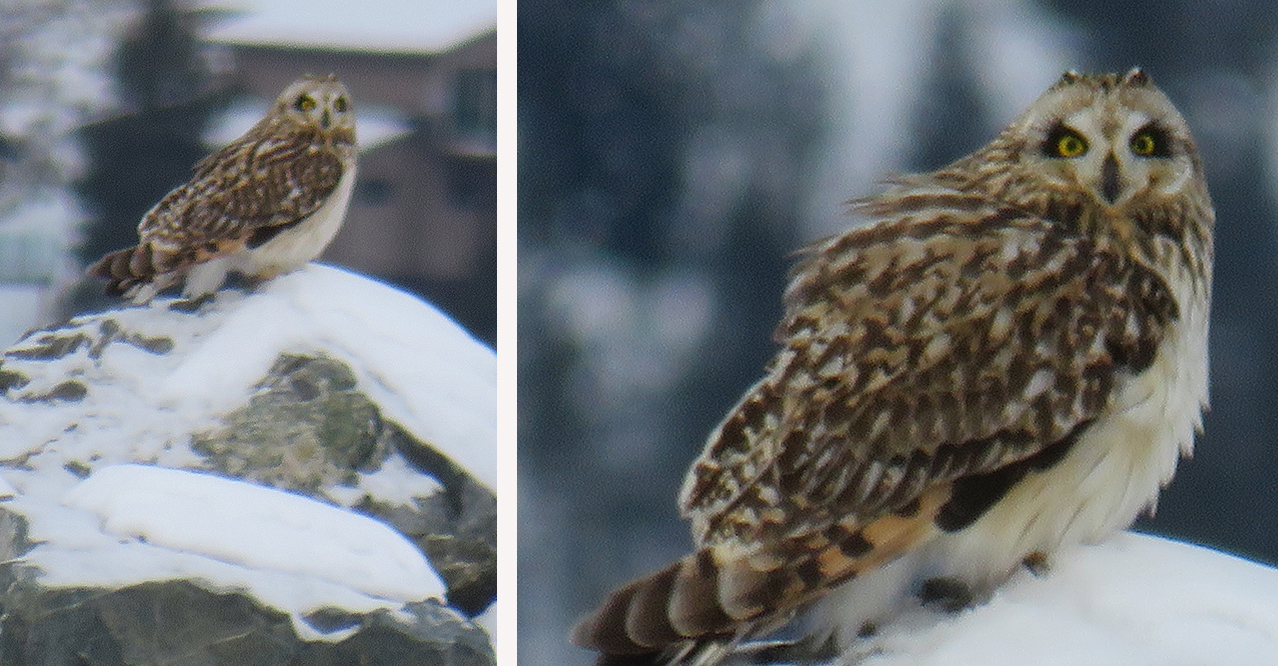 This Short-eared Owl was found a few km outside our count circle so unfortunately is not included in our count data, but we decided to show it here anyway! This species has occurred in the Merritt Christmas count only once in 23 years (in 2004). Photos: © Loretta Holmes.

In the mid-afternoon the snow stopped and by dusk it was positively pleasant in the Merritt area (but still cold at -6 C). 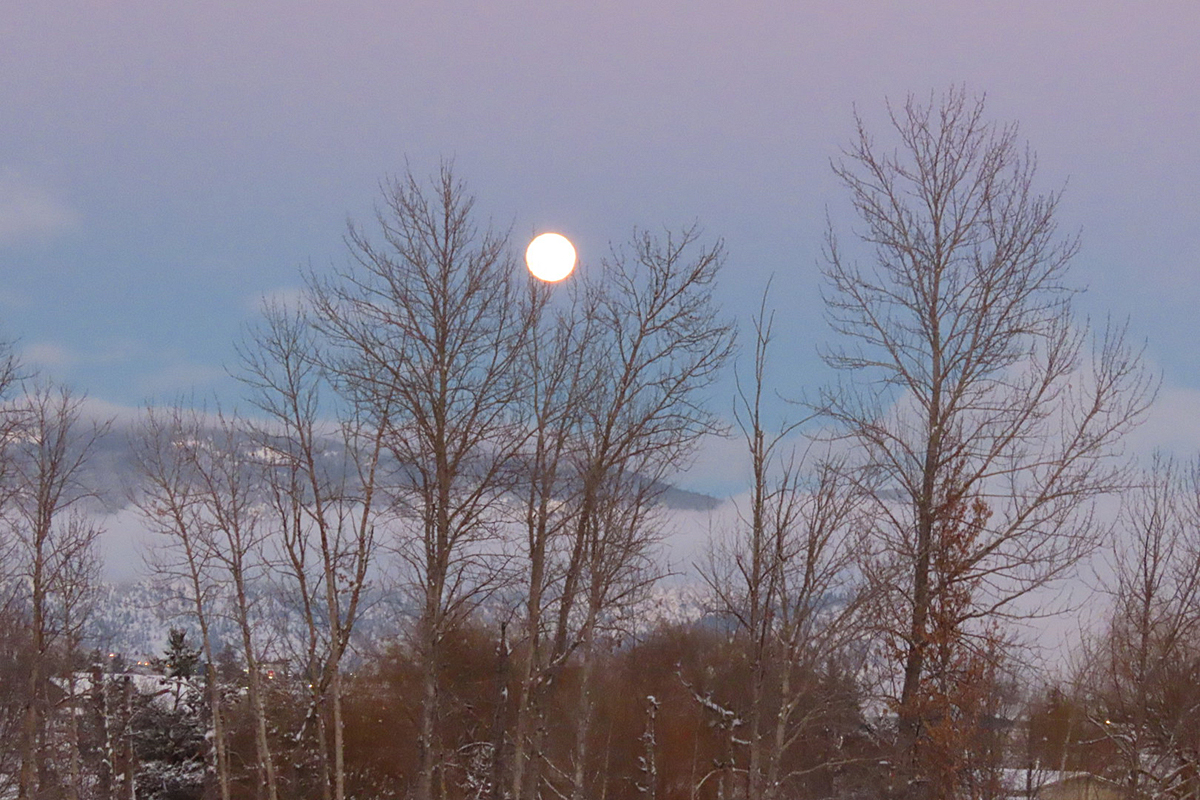 And a beautiful full moon rose to wrap up a good birding day. Photo: © Vic Newton. 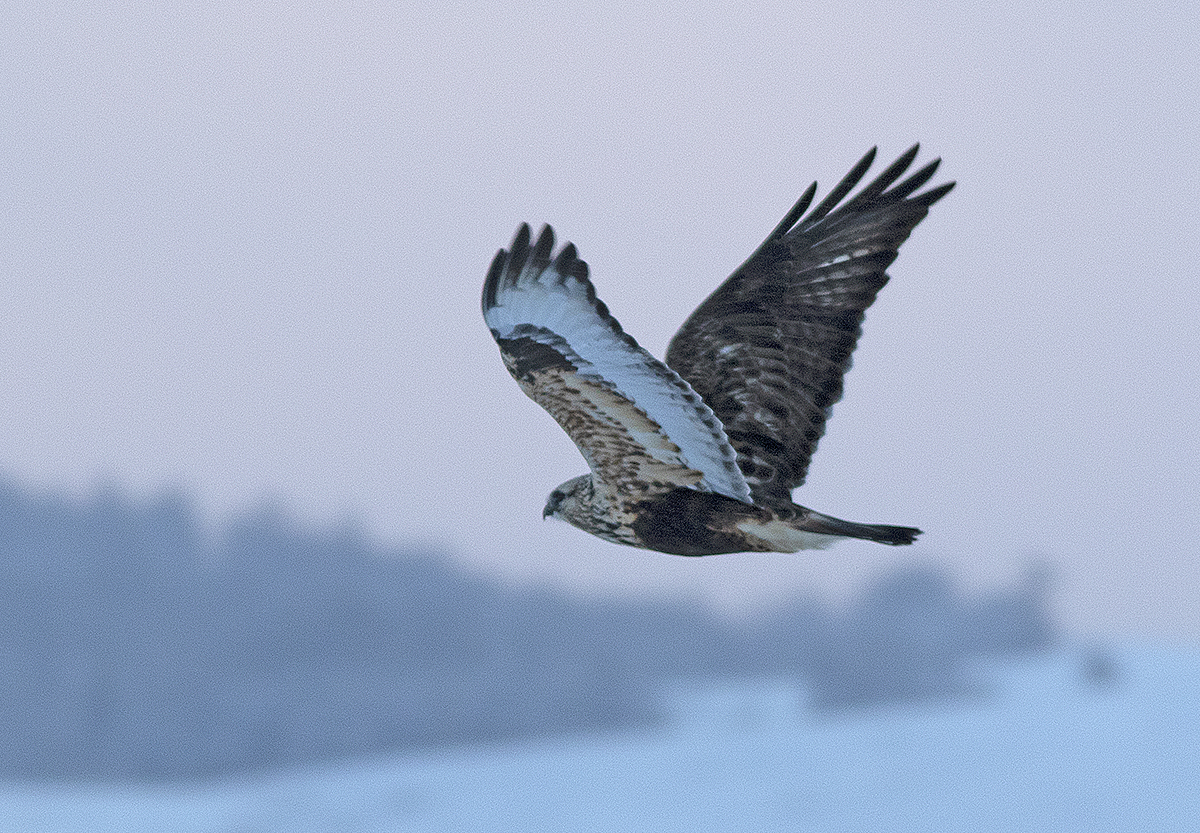 In the late afternoon gloaming, a Rough-legged Hawk flies by. Photo: © Alan Burger

Thanks to all who participated in the 2021 Merritt Christmas Bird Count.