In a joint outing, the Merritt NatureKids club and the Nicola Naturalist Society ran the first Merritt Christmas Bird Count for Kids on 8th January 2022. The day turned out to be bitterly cold (-18 C at times) which meant that attendance was lower than expected, and those that did participate had to resort to regular warm-ups in their vehicles. 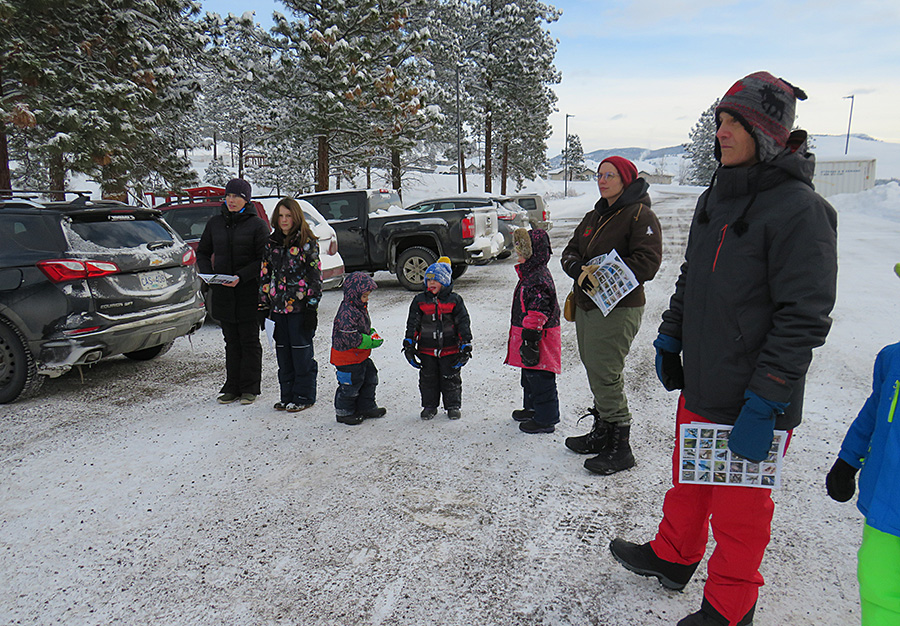 But we did have a good outing, recorded 27 species and over 2,000 individual birds. The kids had great views of Trumpeter Swans, several duck species, sparrows, eagles, doves, American Dippers plunging into icy streams and much more.

Birds Canada, which coordinates the Christmas Bird Counts in Canada, provides a wonderful aid for identification. On their website if one enters the location and the date the website produces a photo identification sheet showing the most common birds one is likely to see and a tally sheet for recording the sightings. The CBC4Kids website is here. 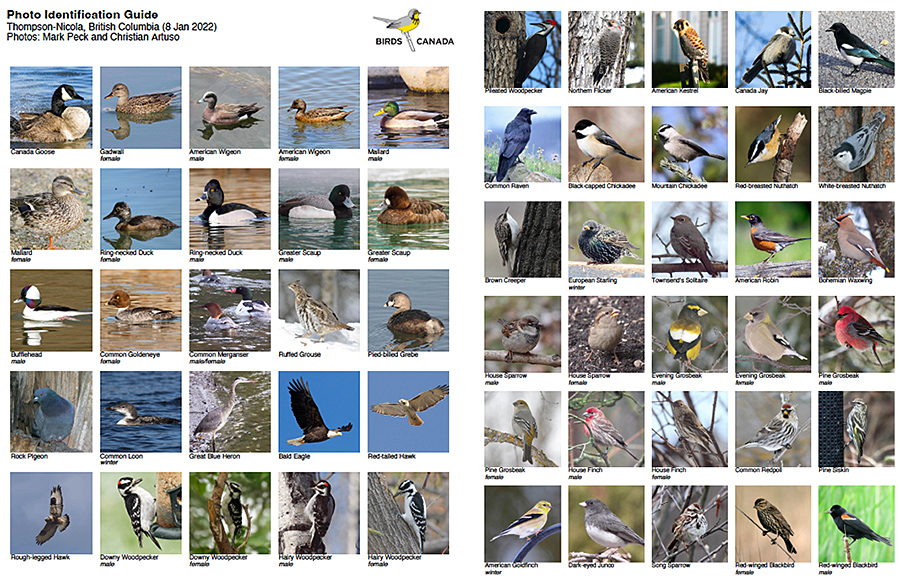 Here is the Birds Canada identification sheet for the Merritt area on 8 January. We did notice a few common species missing, such as American Crow.

Our first stop was at the Nicola River just below the Nicola Lake weir. The lake and most of the rivers were frozen over, but here the  stream coming out from the lake provided some open water. This attracted a nice selection of waterfowl – 8 Trumpeter Swans, 2 Hooded Mergansers, 5 Buffleheads, 2 Common Goldeneyes, and 11 Barrow’s Goldeneyes. 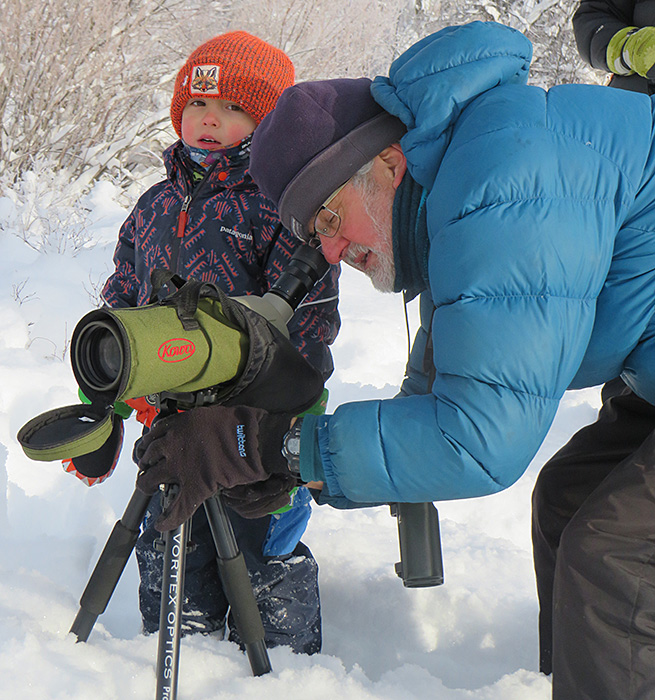 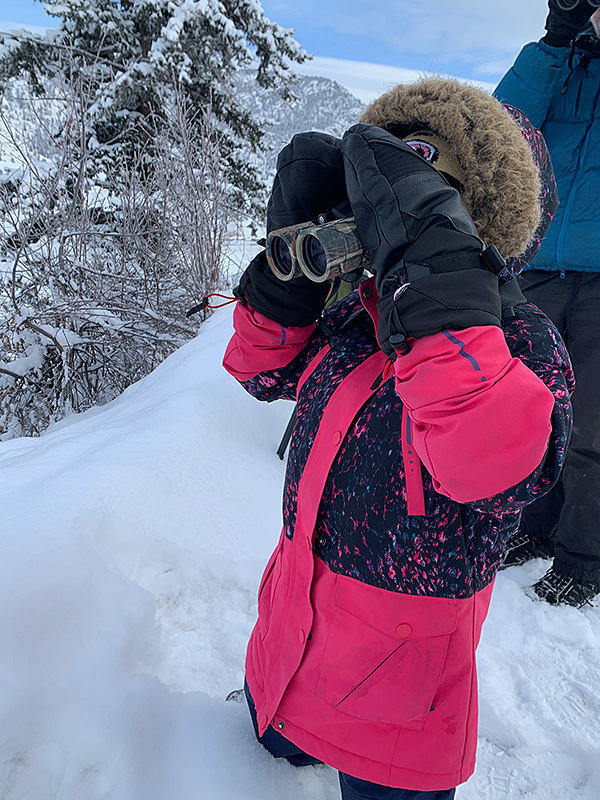 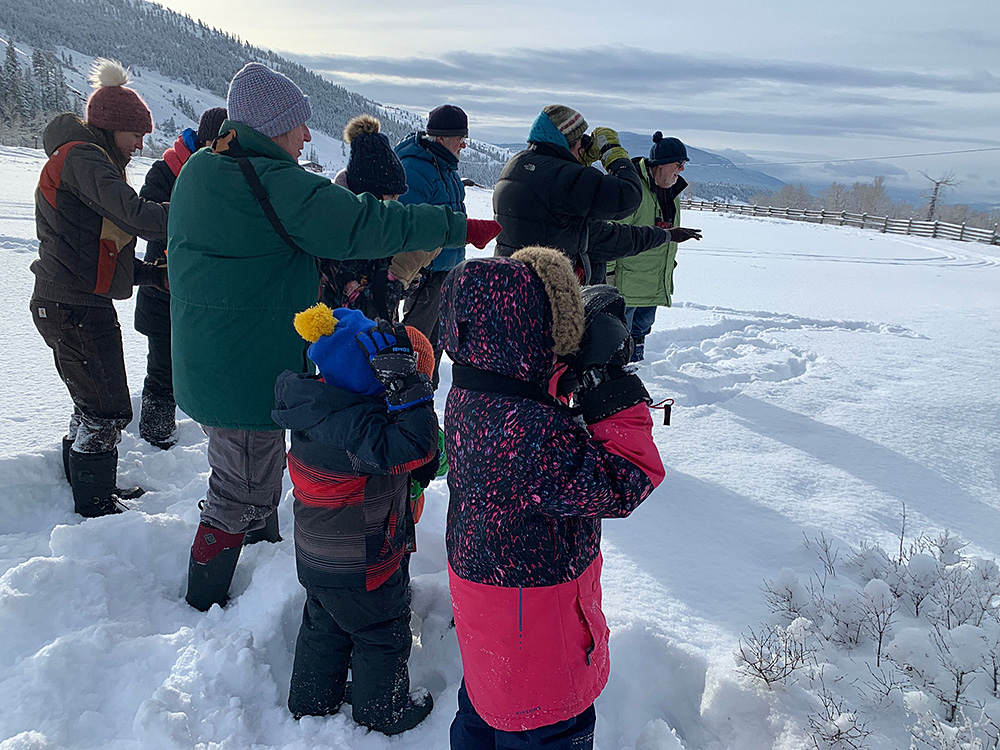 Just a short way down the road we waded through deep snow in order to find some American Dippers. And we were not disappointed – three Dippers entertained us by plunging into the icy stream to feed underwater, and then leaping back on to the snowy rocks to catch a breath. 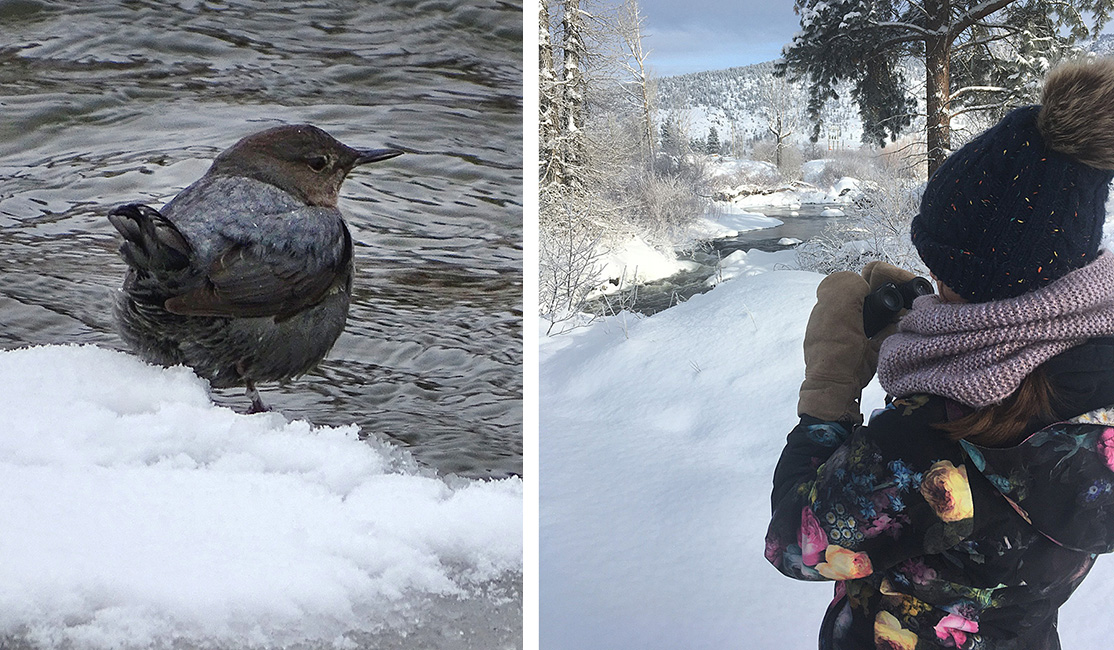 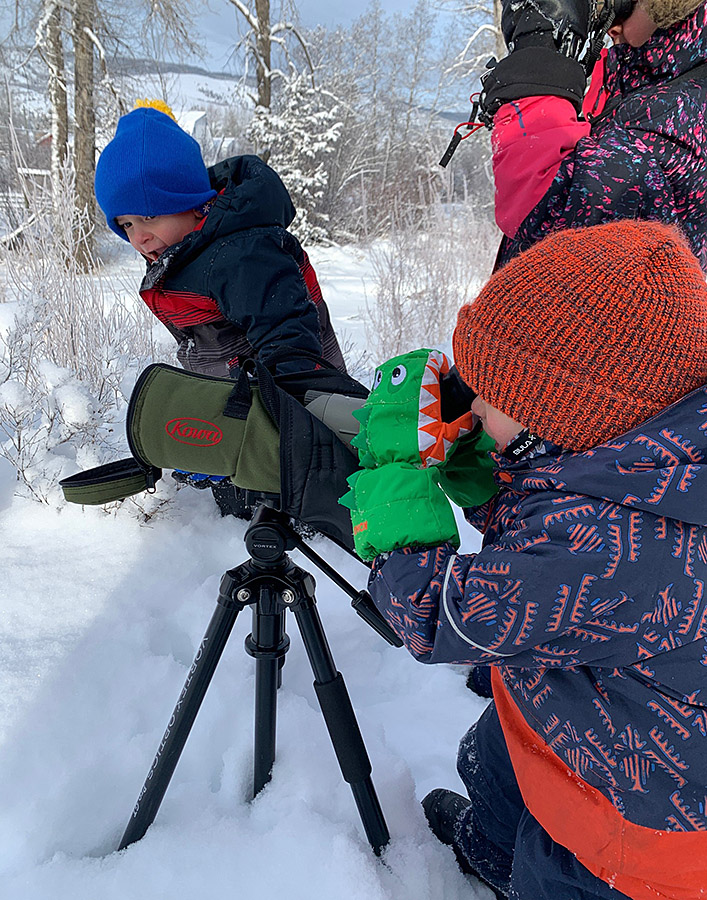 The spotting scope was a popular option at the Dipper site on the Nicola River. Photo: Sarah Derosiers

Our final stop was the cattle feedlot close by. Hundreds of cows are fed hay and silage and this attracts huge numbers of birds. Close to 2,000 Mallards were among the cows or resting on the snowy river banks. Flocks of sparrows, including Song and White-crowned Sparrows and Dark-eyed Juncos, searched for seeds among the cattle feed.  Rock Pigeons, Mourning Doves and Eurasian Collared-doves swirled around in flocks. The cow morgue attracted two species of eagles and dozens of American Crows and Common Ravens. 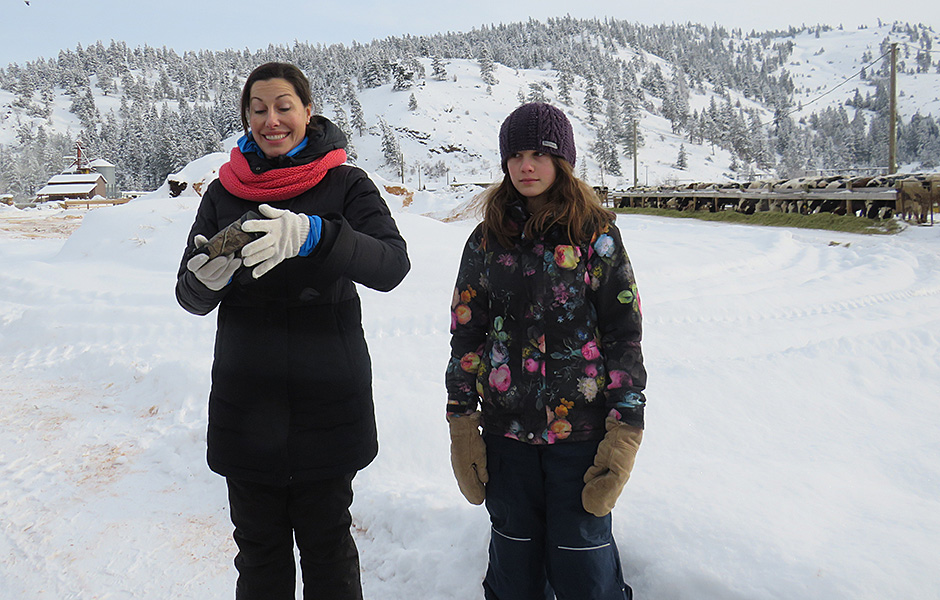 Arriving at the cattle feedlot – the hay and silage fed to the cows also feeds huge numbers of birds. Photo: Loretta Holmes. 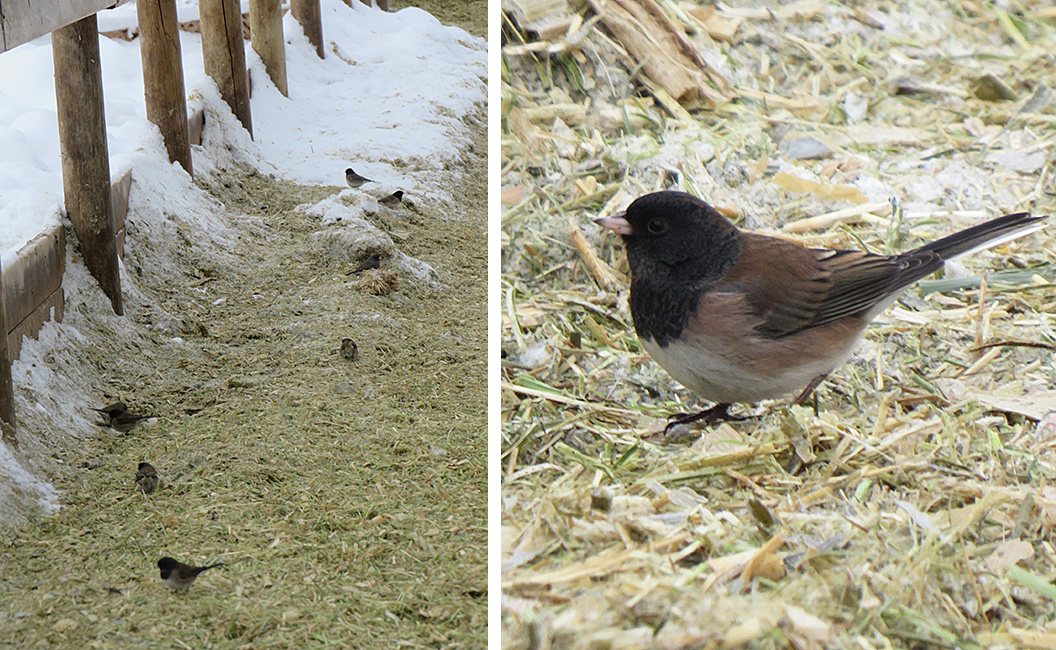 Sparrows foraging among the cow feed. On the right is a close-up of a Dark-eyed Junco – one of the common species here. Photos: Loretta Holmes. 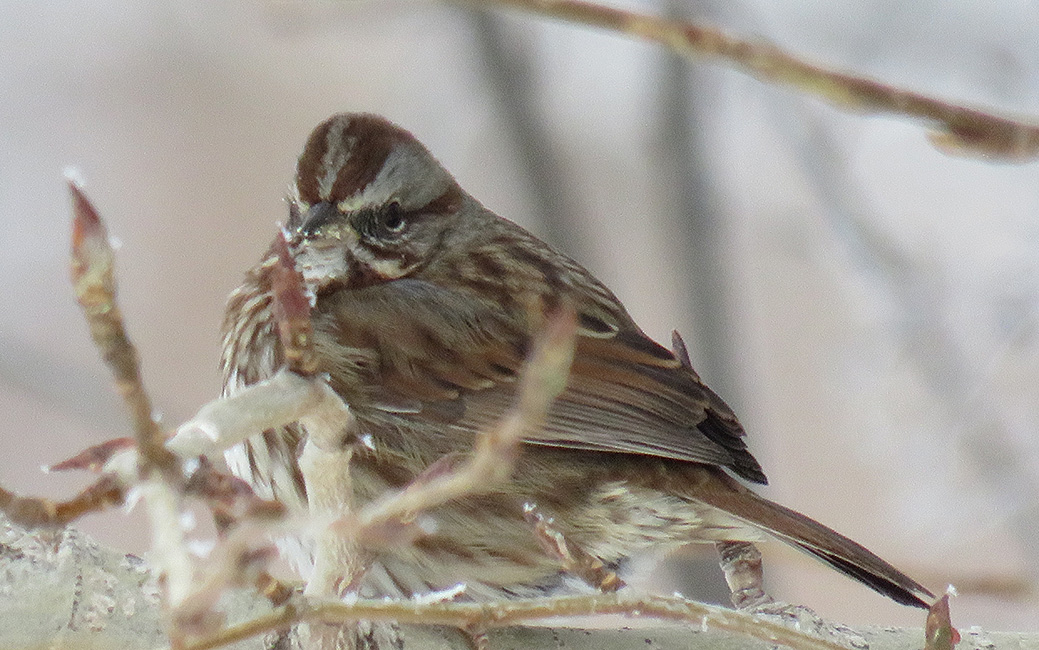 A Song Sparrow – another common bird at the feedlot. Photo: Loretta Holmes. 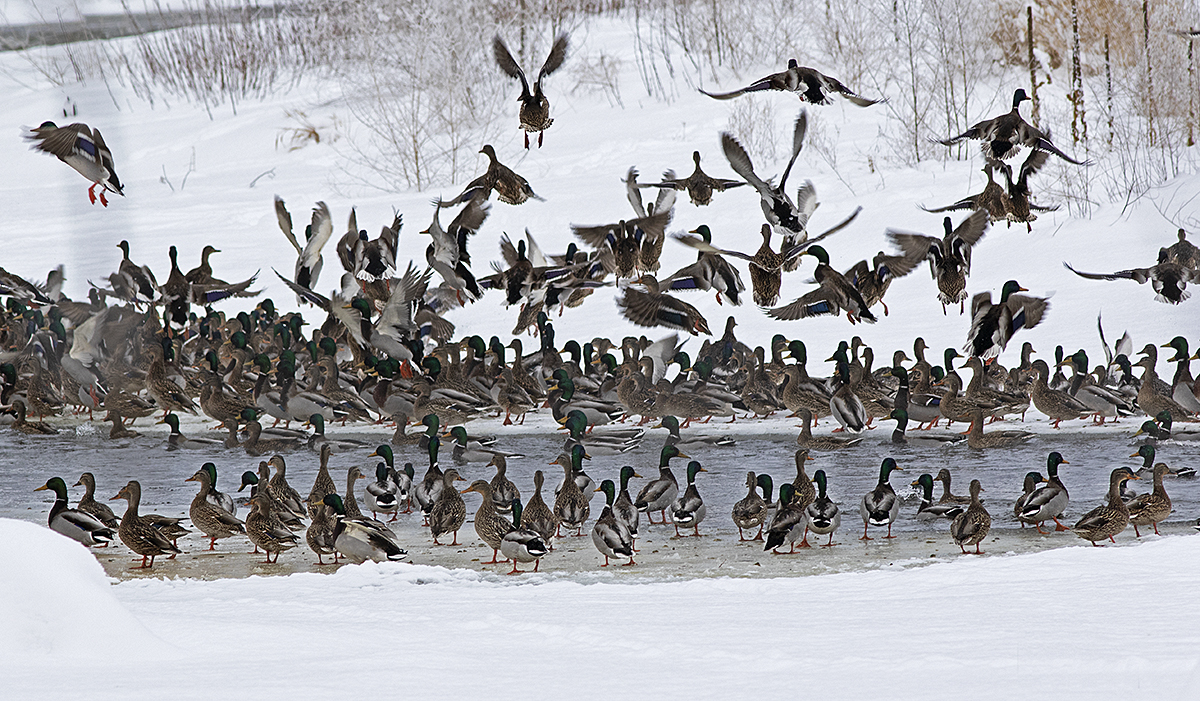 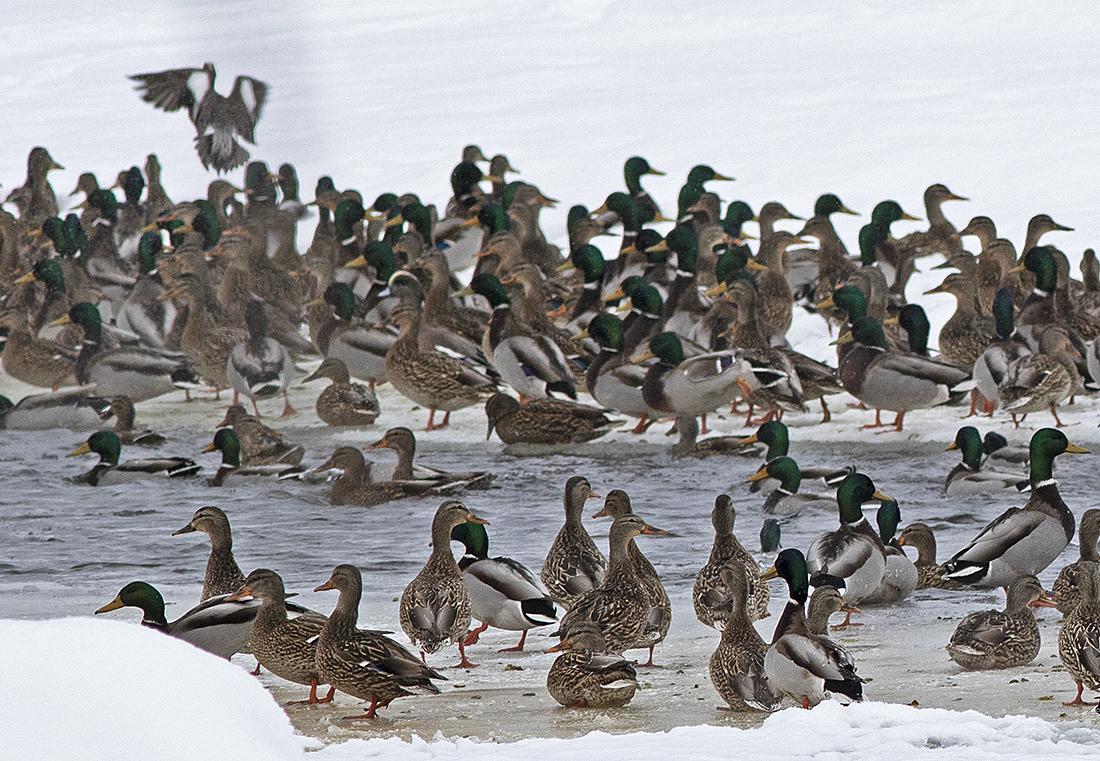 Another view of the Mallard crowds. There are also two American Wigeon in this flock, one taking off on the left and one with its cream-coloured head crest surrounded by Mallards. Photo: Alan Burger 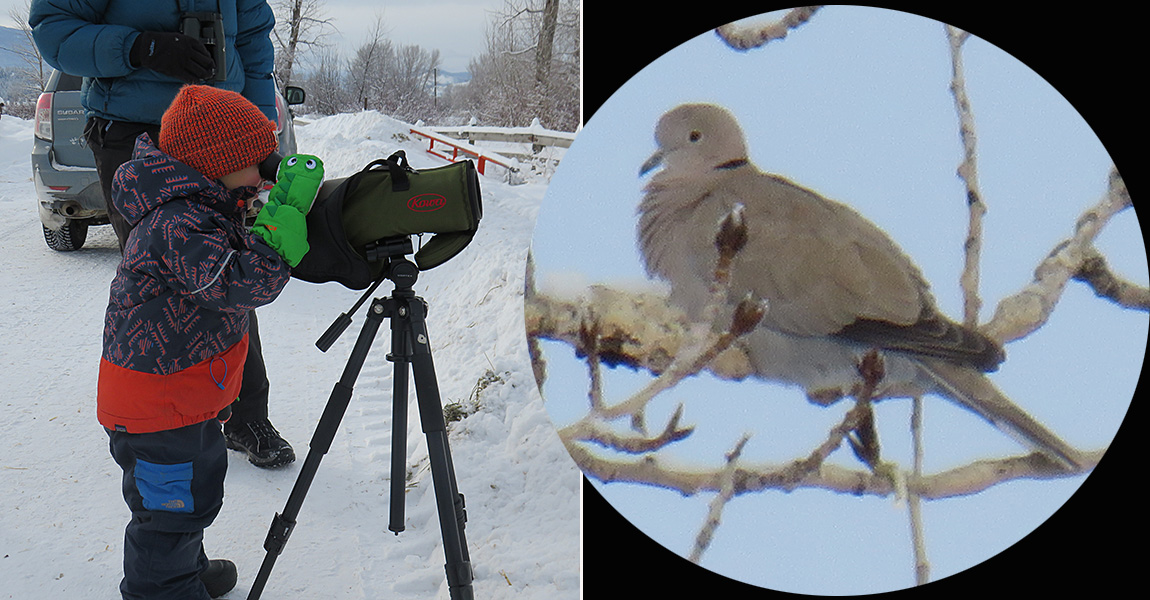 The spotting scope was useful at the feedlot to get good looks at birds sitting on the nearby trees, like this Eurasian Collared Dove. Photos: Loretta Holmes. 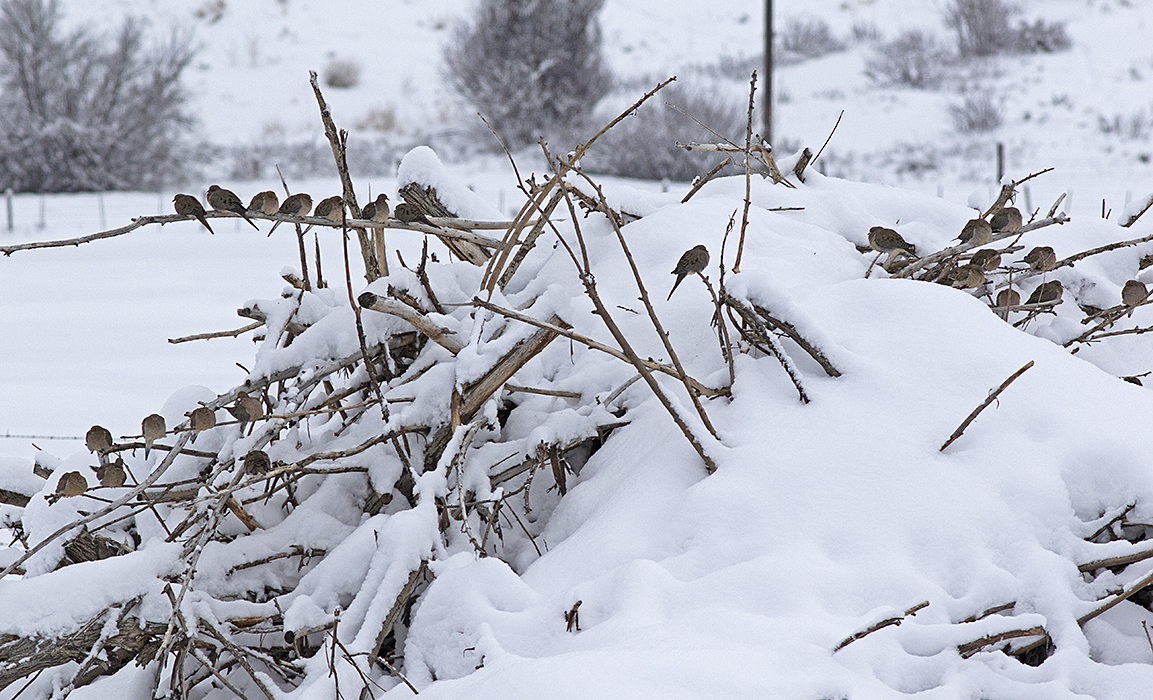 Mourning Doves all fluffed up to tolerate the cold at the cow feedlot. Photo: Alan Burger 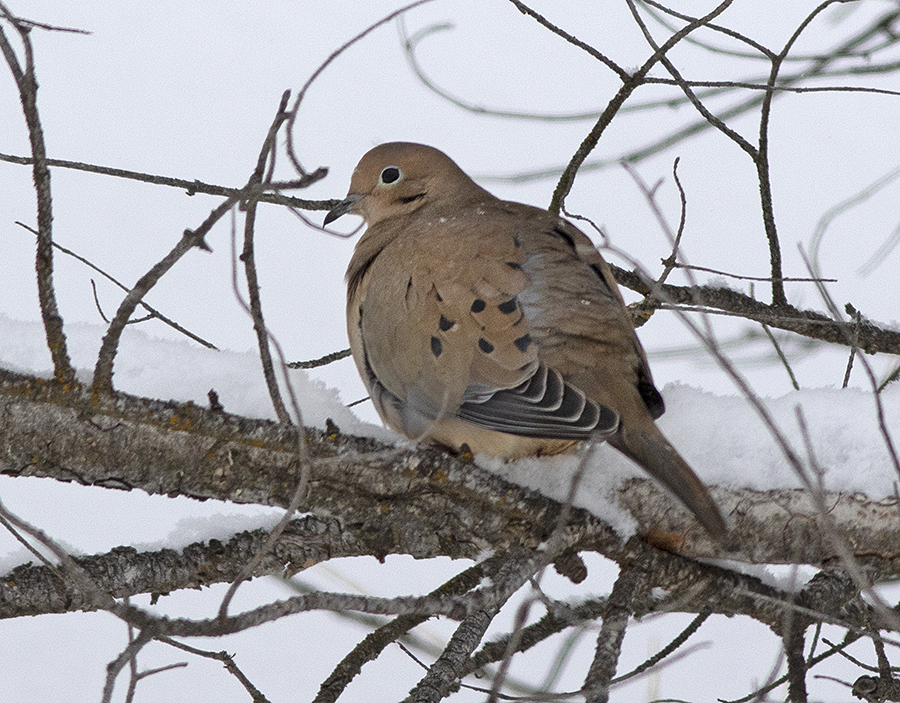 A closer view of a Mourning Dove. Photo: Alan Burger 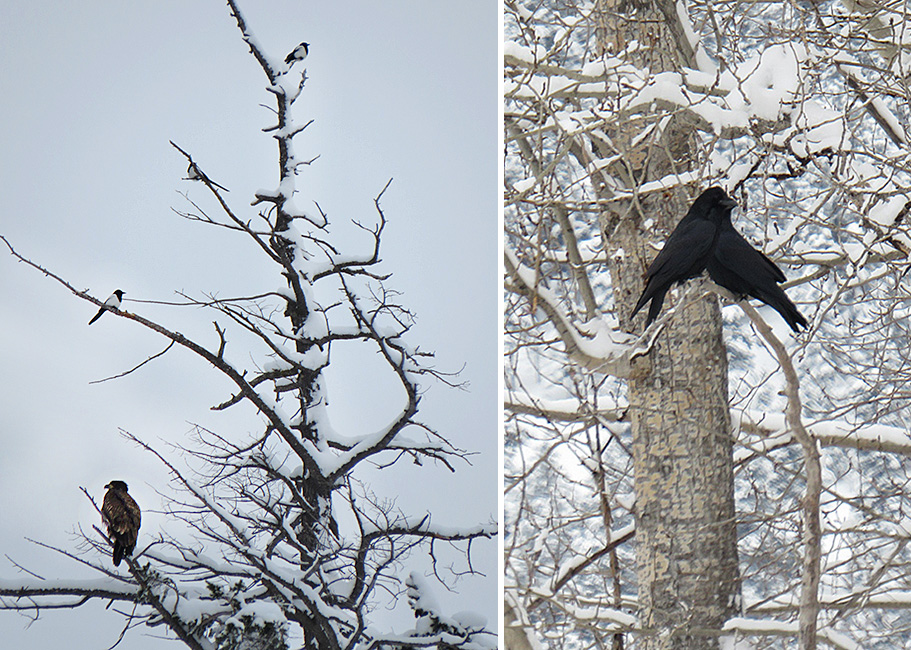 A few of the scavenger birds at the cattle feedlot – on the left an immature Bald Eagle and three Magpies; on the right a pair of Common Ravens. Photos: Loretta Holmes 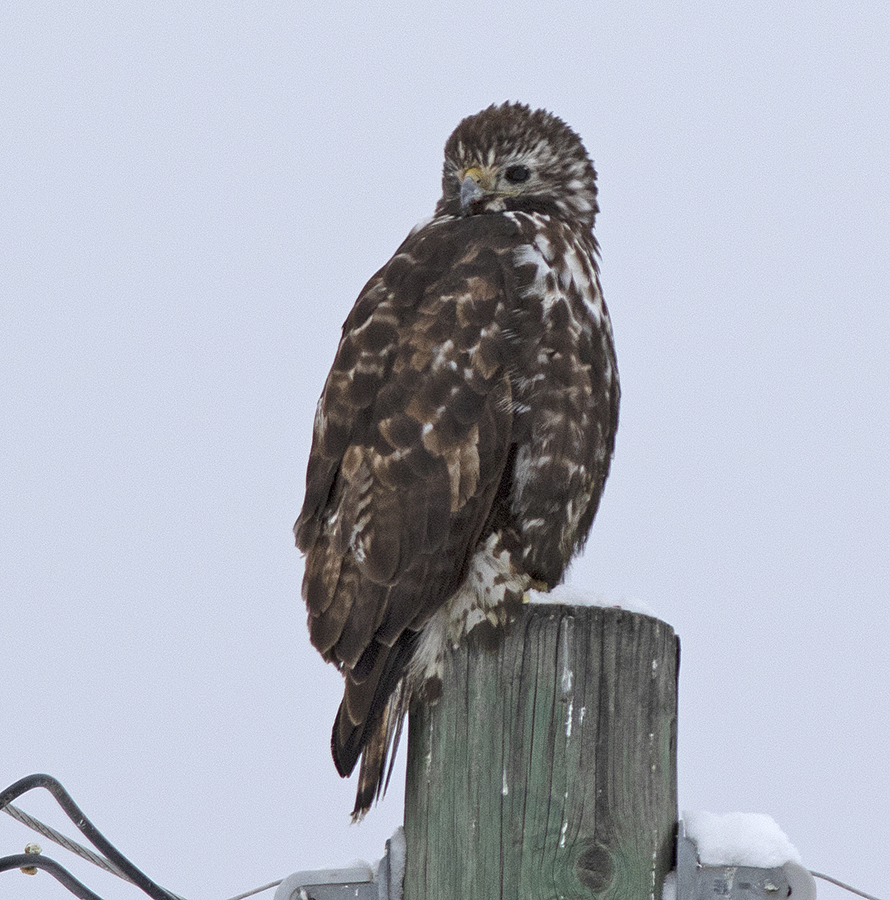 An immature Red-tailed Hawk – probably on the lookout for mice at the cattle feedlot. Photo: Alan Burger 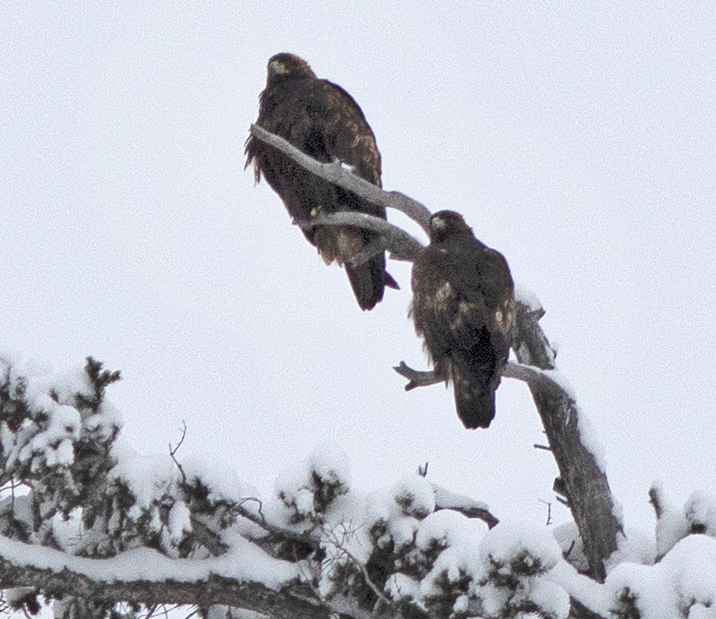 A distant view of two Golden Eagles – quite rare birds in our area. Photo: Alan Burger. 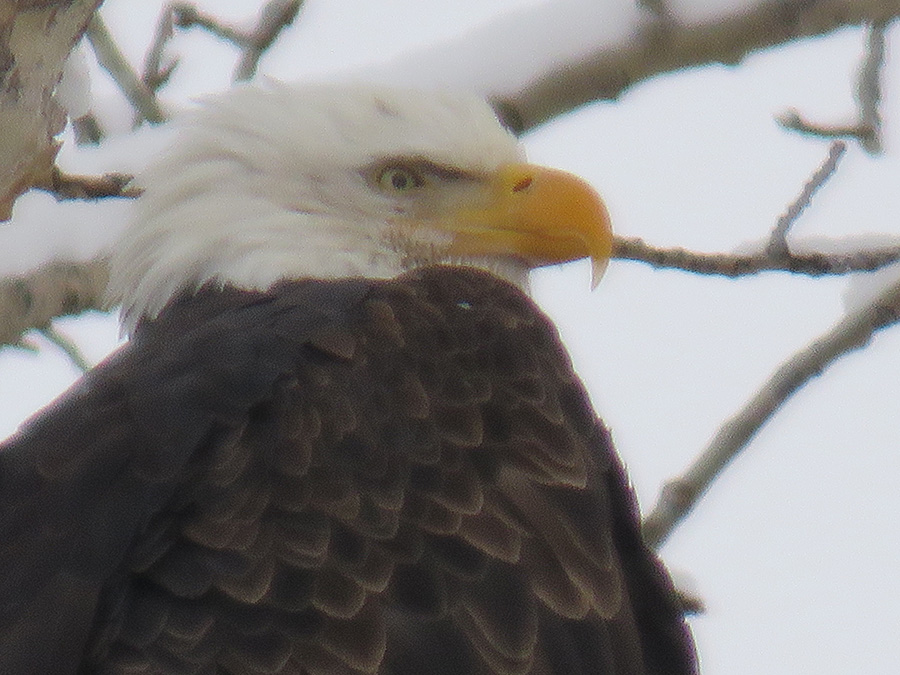 A close view of one of the 16 Bald Eagles seen during our outing. Photo: Loretta Holmes.

After a couple of hours in the cold we were all happy to head home, having seen some beautiful and interesting birds and impressed at their ability to behave so normally during this cold and snowy weather. Here is our final tally for the day: 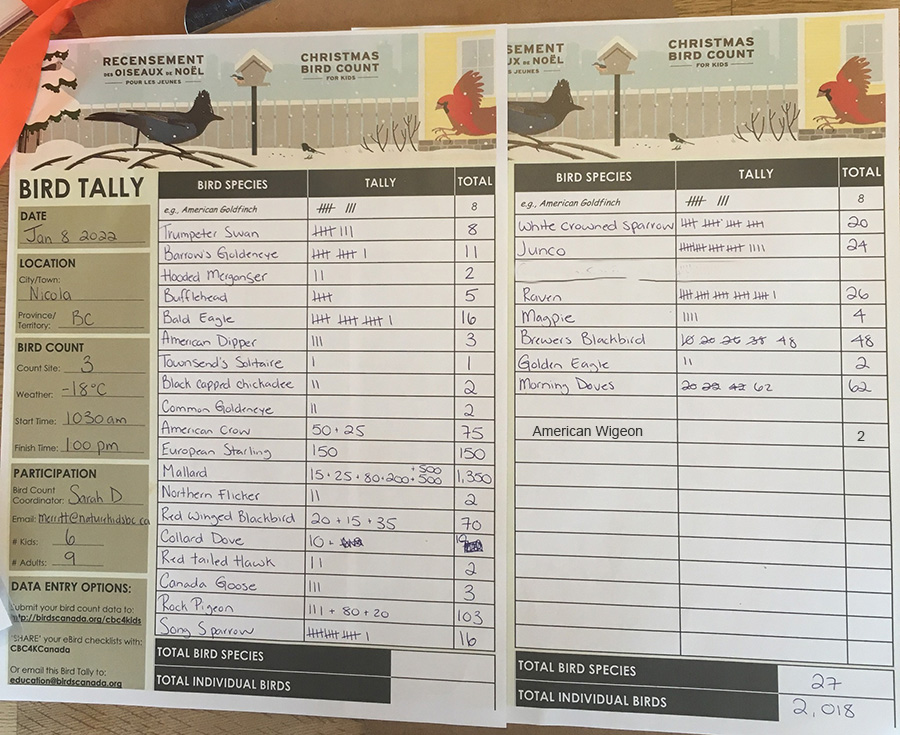