This is the third of our virtual outings during the COVID-19 pandemic, with spring photos of local wildlife from the members of the Nicola Naturalist Society, based in Merritt, BC.

In mid-May, many migrant songbirds have arrived to set up territories, begin singing and start nesting. 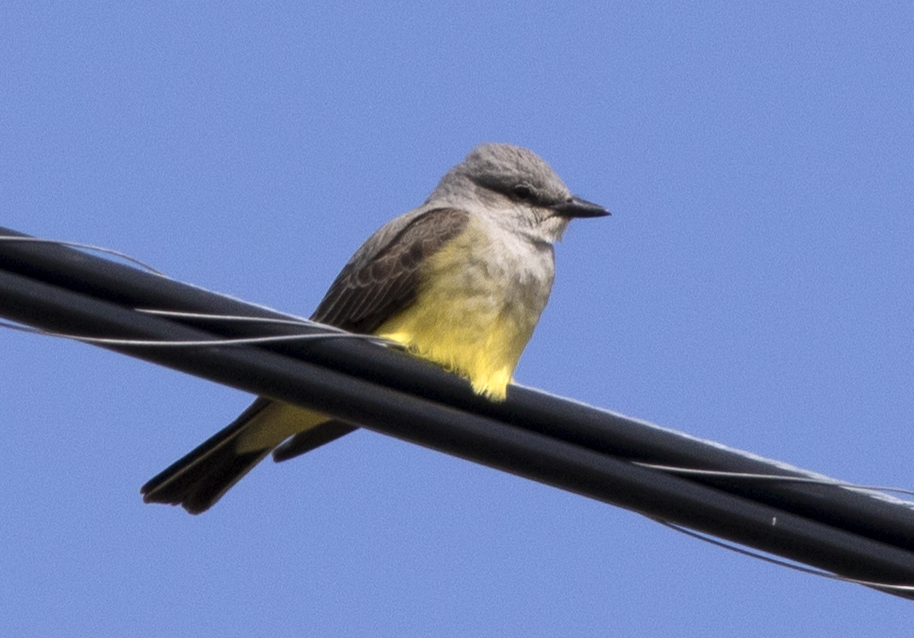 Western Kingbirds have recently arrived in our area. These large flycatchers are typically found in open areas like grasslands and hayfields. Photo: ©Alan Burger 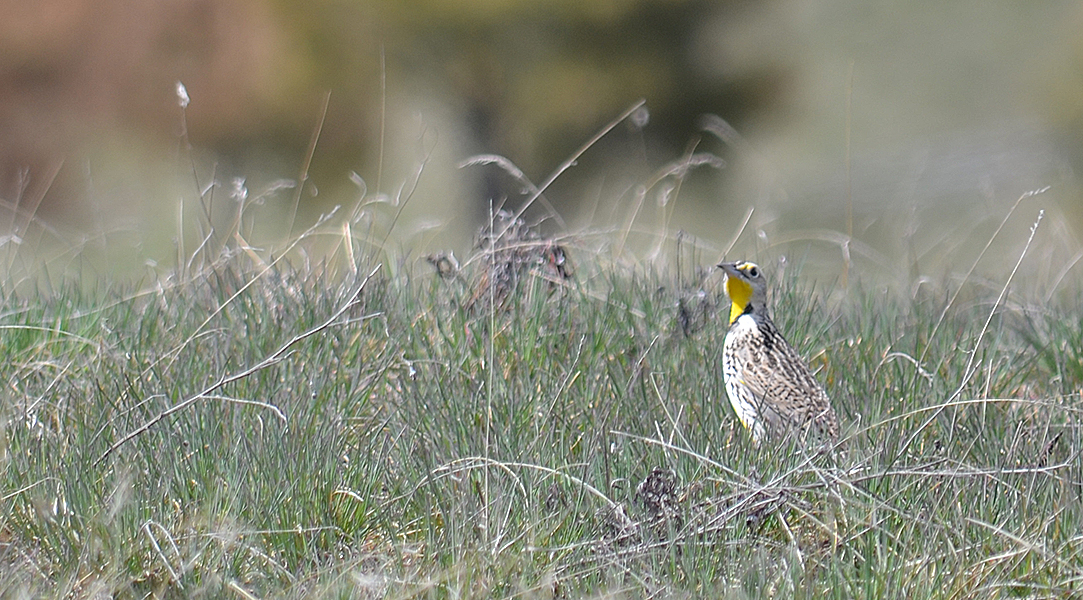 A lovely habitat photo of a Western Meadowlark – the melodic symbol of grasslands in the southern interior of B.C. Photo: ©Paul Willms 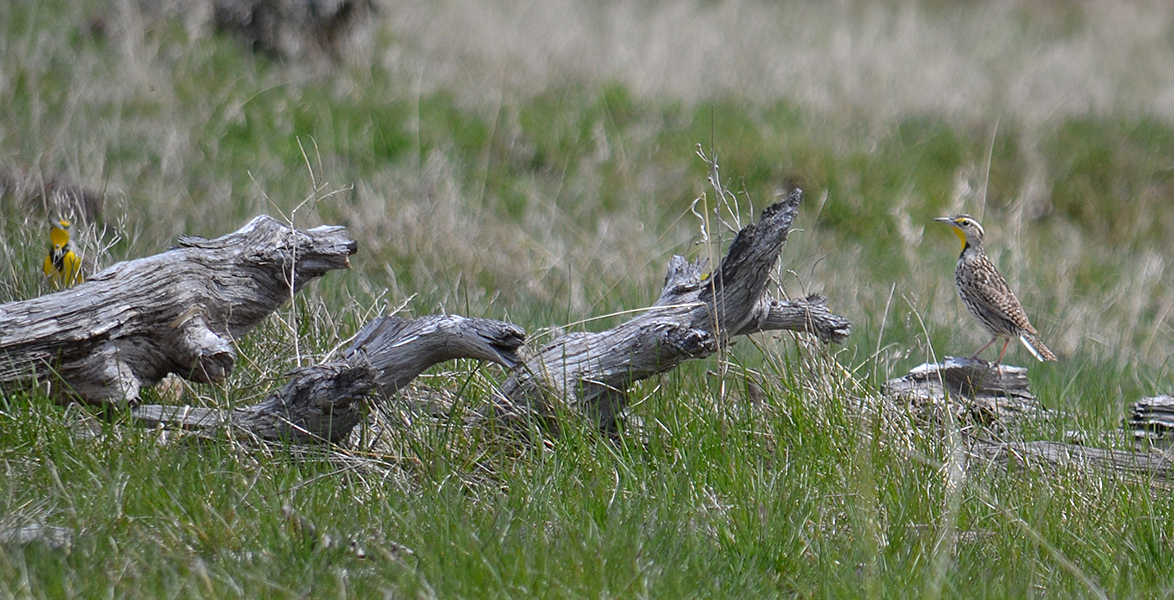 A pair of Western Meadowlarks foraging in the long grass. Photo: ©Paul Willms 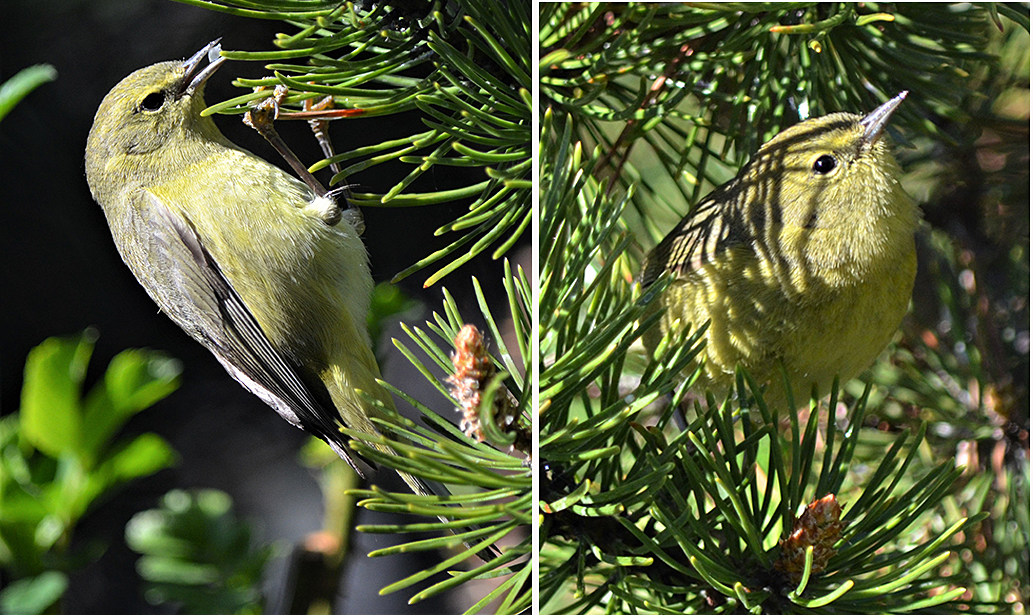 A couple of sharp images of one of our more common warblers – Orange-crowned Warbler. The orange crown is often not visible. Photos: ©Bob Scafe 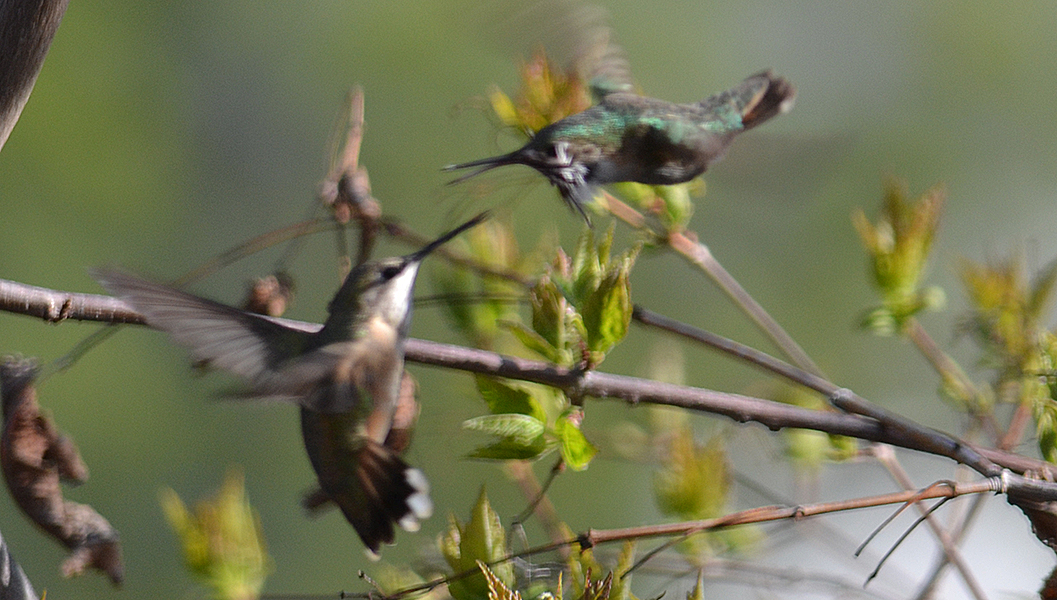 Blurred by the action! A rare photo of an interspecific spat between a female Rufous Hummingbird and a male Calliope Hummingbird. Photo: ©Paul Willms 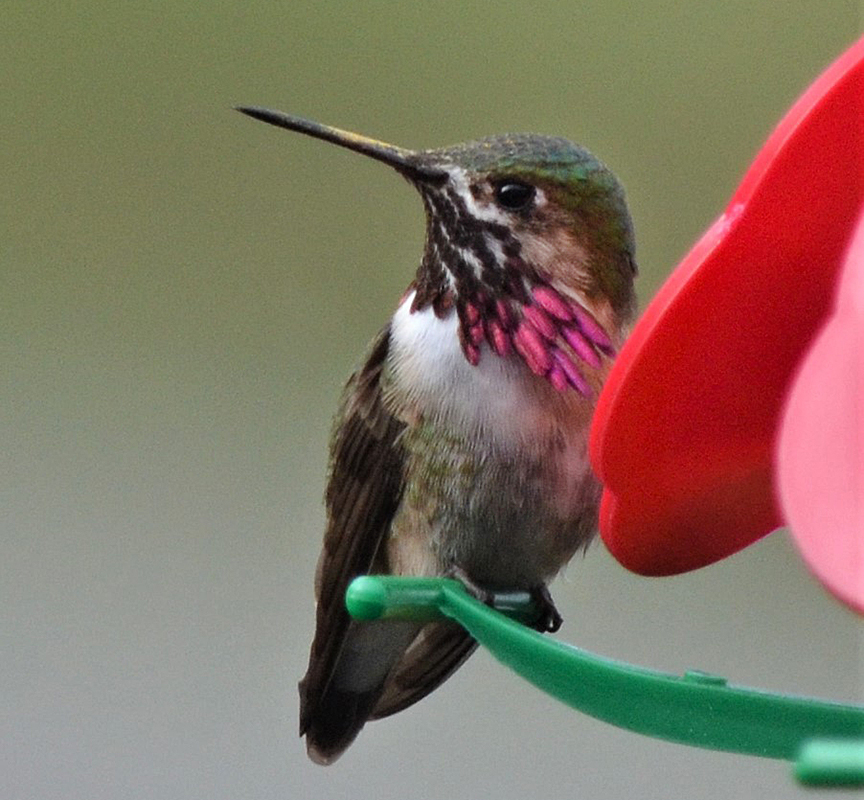 Many of our year-round resident birds are also preparing to breed. Blackbirds that spend the winter in large flocks are now more dispersed, often paired up and territorial. 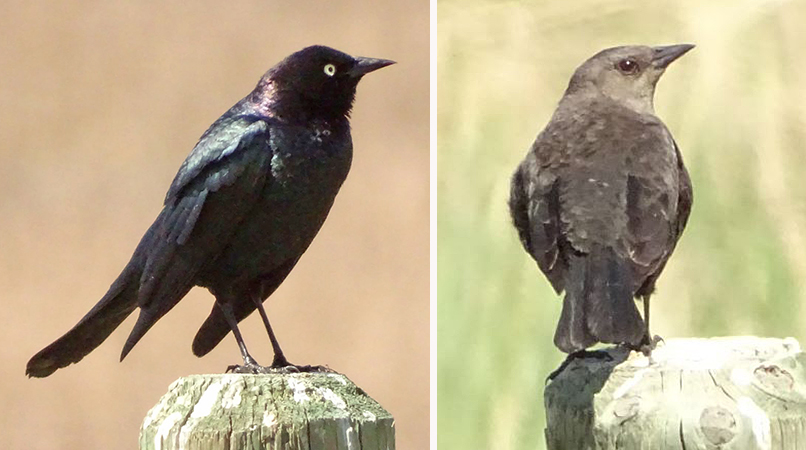 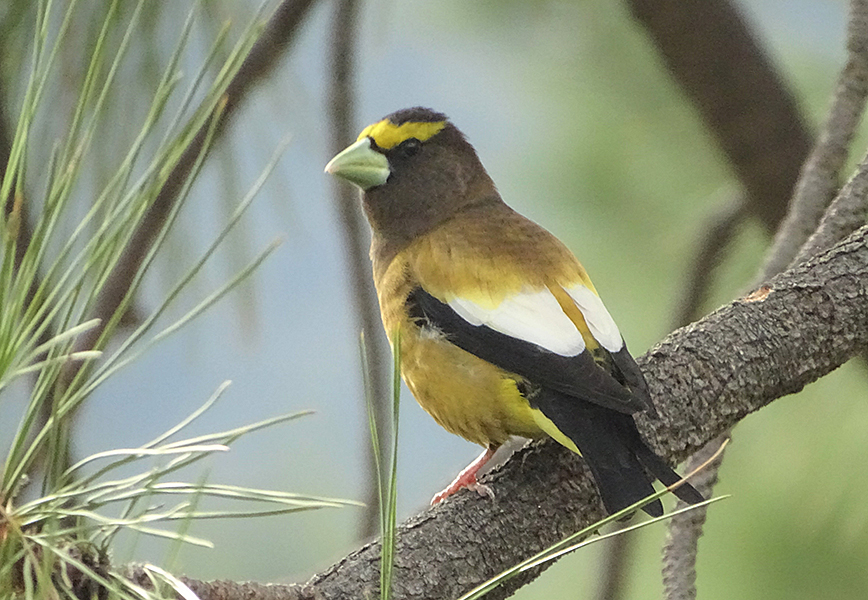 One of the avian mysteries in southern B.C. over the past few years has been the huge fluctuation in numbers of Pine Siskins. These small finches are usually regular visitors to feeders year-round. In the winter of 2018-2019 with a superabundance of Douglas-fir cones there were siskins everywhere. In contrast, siskins were hard to find in the winter of 2019-2020 even though there were still a lot of Douglas-fir cones available. Now we are seeing a few siskins reappearing in the Nicola Valley and surrounding areas, but still in low numbers. 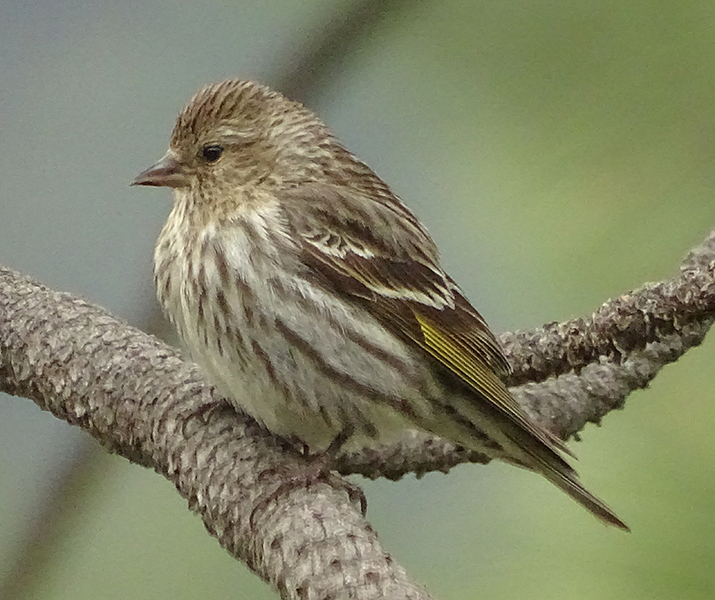 Missing for many months in our area, some Pine Siskins are reappearing in our area, at feeders and in the woods. Photo: ©Anne Pang 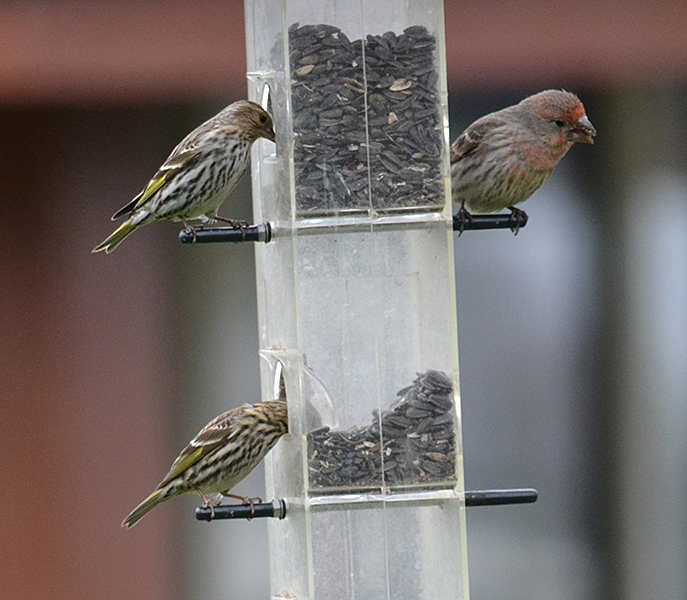 Pine Siskins (on the left) are once again showing up at Merritt feeders this spring. The species is usually a common year-round resident in our area but was rarely seen in the 2019-2020 winter. The bird on the right is a male House Finch – another regular at feeders in Merritt. Photo: ©Paul Willms 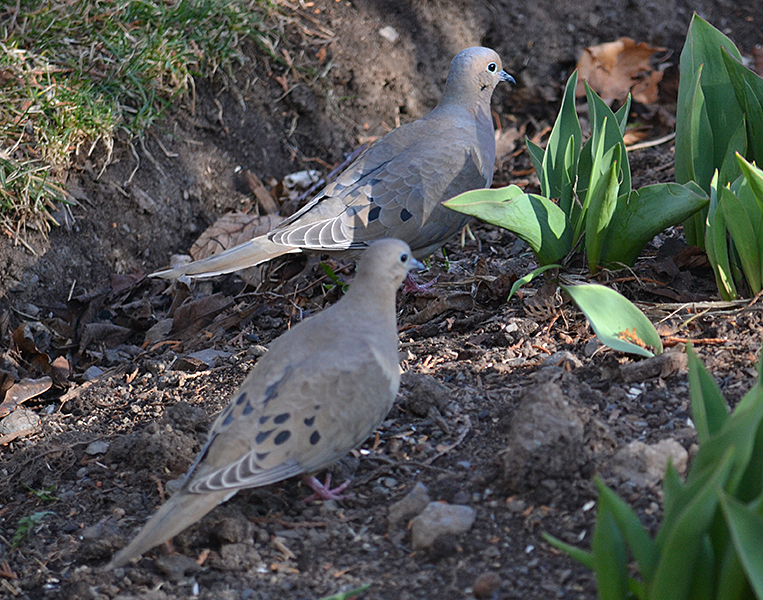 A pair of Mourning Doves in a Merritt garden. These days the introduced Eurasian Collared Doves are more often seen in urban areas than these native Mourning Doves. Photo: ©Paul Willms

Wetlands are busy places in spring and right now there are hundreds of ducks, geese, coots, and other birds in the lakes, ponds and marshes in our area. 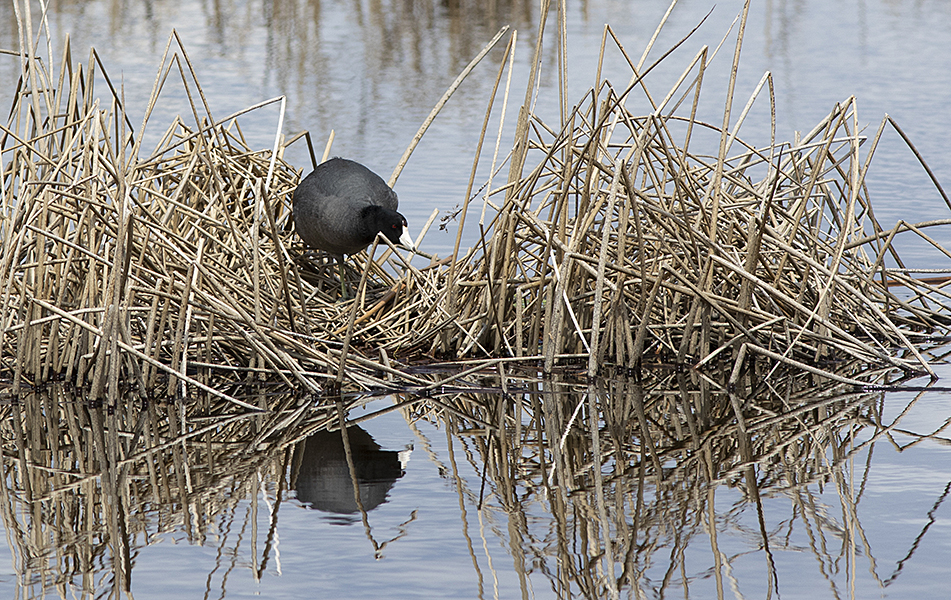 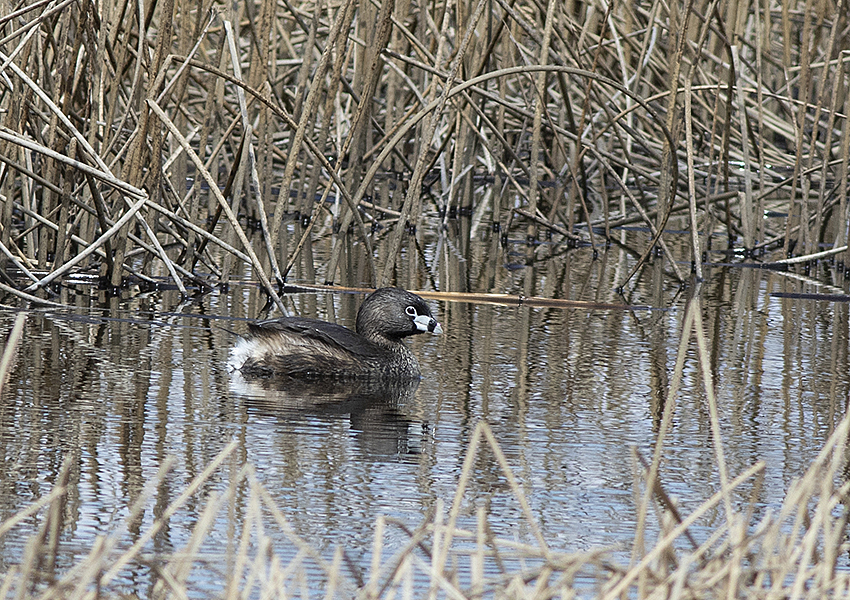 An inhabitant of many marshes and lake edges, Pied-billed Grebes are quite common but often overlooked. They tend to skulk around reed-beds and other aquatic vegetation, diving to catch aquatic insects and small fish. This one was at Rush Lake on the Douglas Lake plateau. Photo: ©Alan Burger 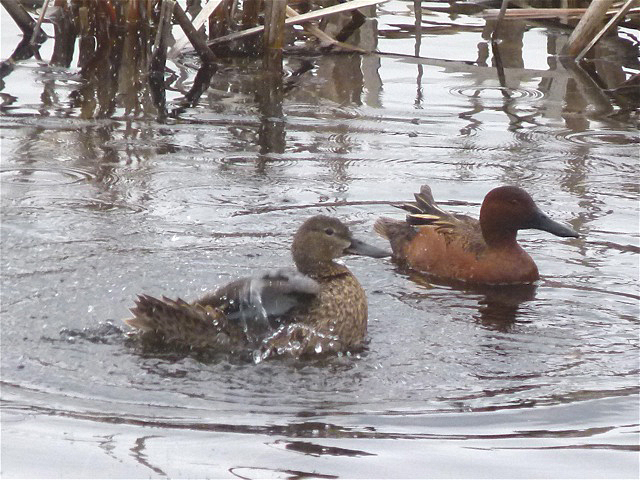 One of our less common dabbling ducks, Cinnamon Teal are most often found in shallow ponds. The male is unmistakable, but the female, seen bathing here, can easily be confused with other female dabblers. Photo: © Jack & Carol Madryga 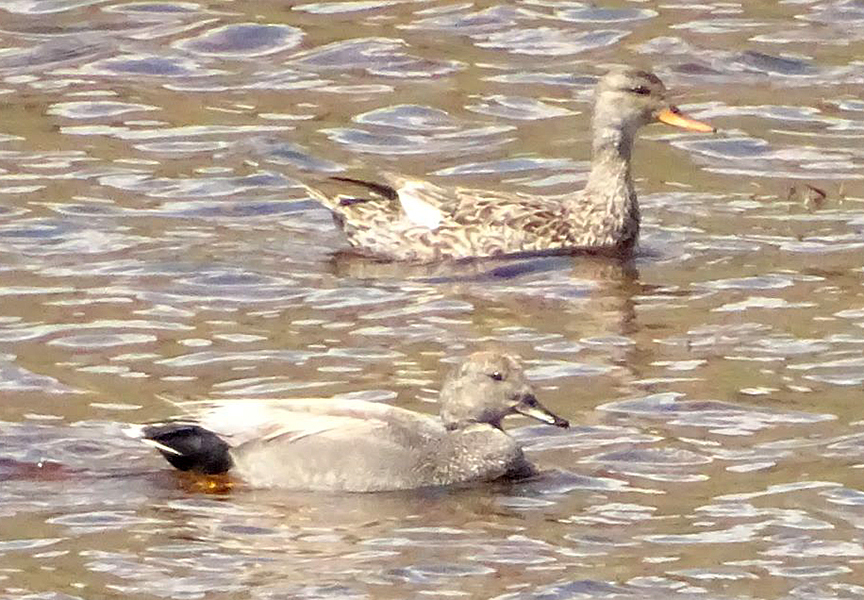 A pair of Gadwall. The male is easy to identify with his grey-brown plumage and black rump. The  female is similar to a female Mallard and other large female ducks, but note the dark tail and bicoloured bill. Photo: Anne Pang 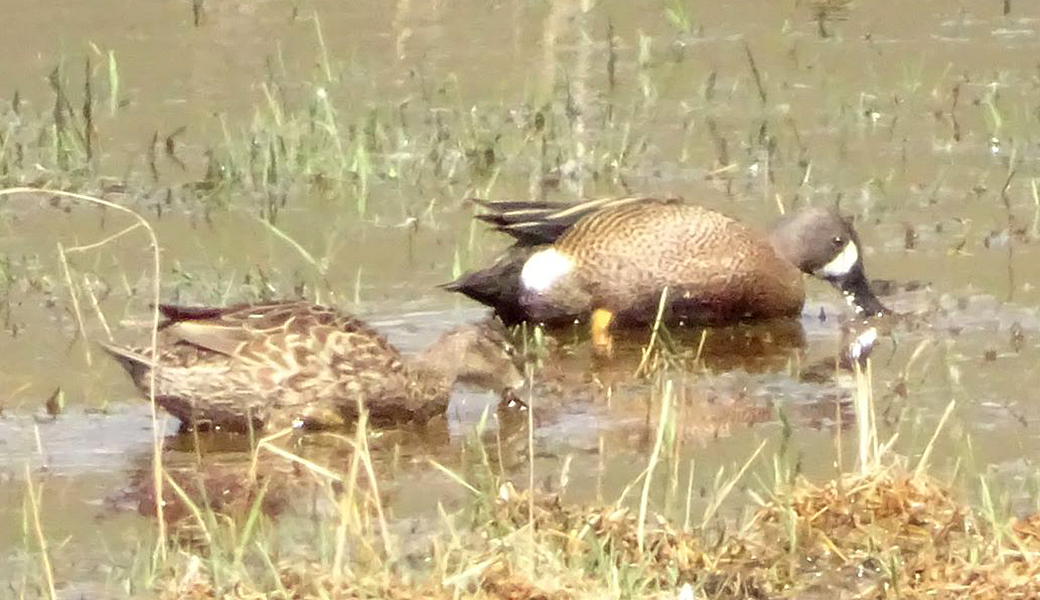 A pair of Blue-winged Teal. Once again the male is distinctive but the female is similar to other female ducks. Photo: ©Anne Pang. 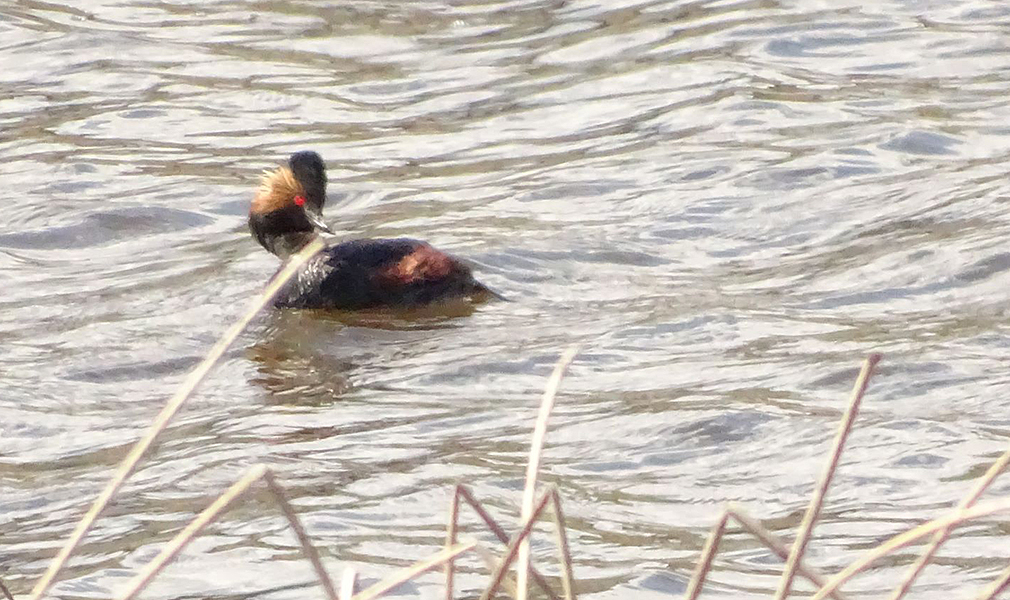 An Eared Grebe. More than 60 of these tiny grebes nest at Beaver Ranch Flats – lovely to see in their smart breeding plumage. Photo: ©Anne Pang

In spring wetlands are good places to look for rare birds – some of them are just passing through but others have been found breeding on rare occasions in southern B.C. Here are a few recently found in the Merritt area. 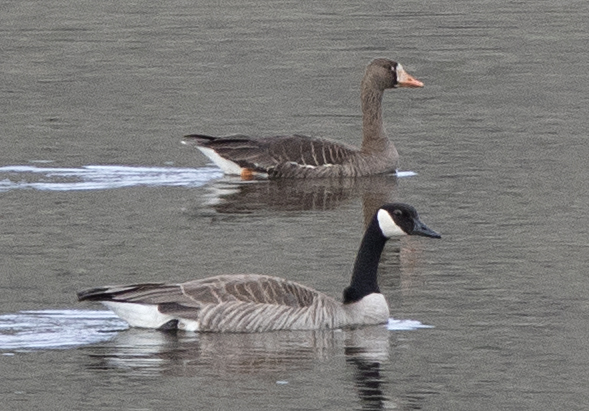 A Greater White-fronted Goose hanging around with the local Canada Geese at Beaver Ranch Flats on the Guichon Ranch. Greater White-fronts breed on the Arctic tundra – so this bird was probably a juvenile or was still heading north a bit late. Photo: ©Alan Burger

Three Black-necked Stilts, along with a couple of Greater Yellowlegs, at the flooded field next to Beaver Ranch Flats on the Guichon Ranch. B.C. is north of the regular breeding range of these stilts but in recent years a few pairs have been breeding in southern B.C. Photo: ©Alan Burger 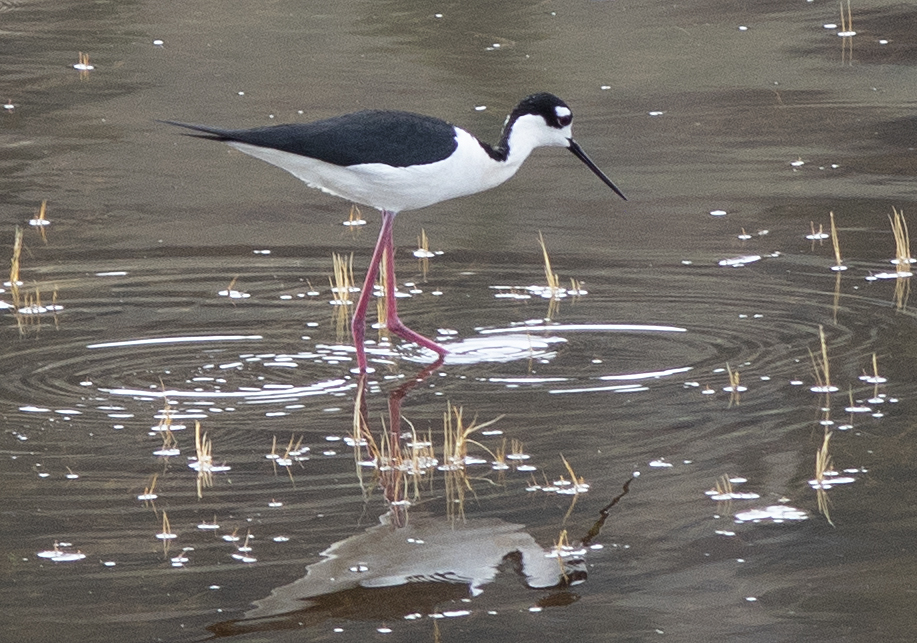 A close-up of a Black-necked Stilt at Beaver Ranch Flats on 5 May 2020. Photo: ©Alan Burger 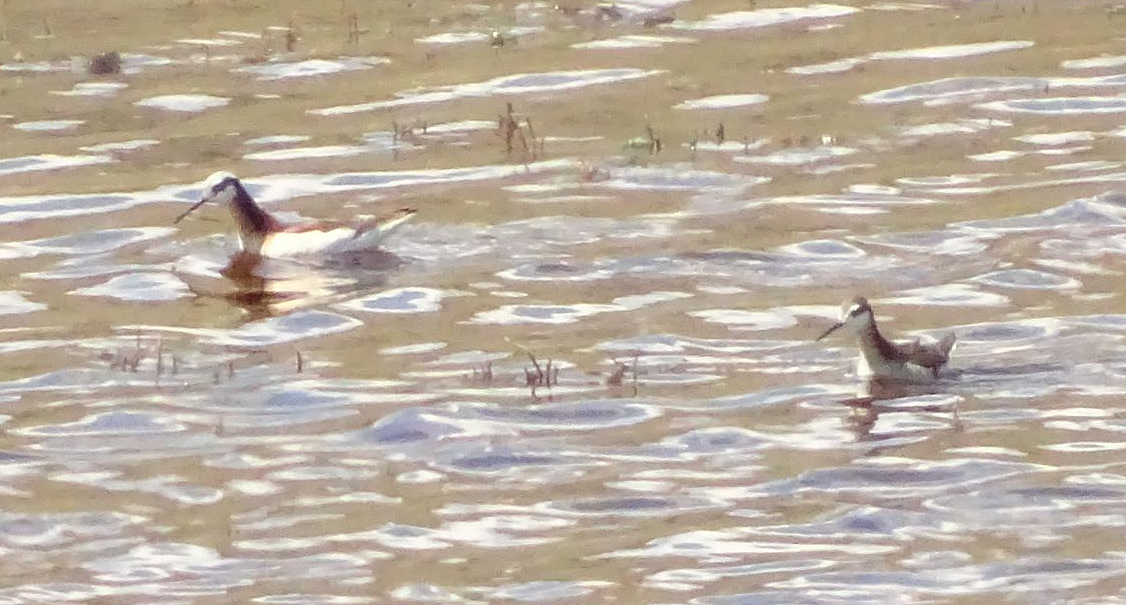 Wilson’s Phalaropes breed in small numbers in shallow wetlands in southern B.C. This pair was at Beaver Ranch Flats. Unlike most birds, in phalaropes the female (left) has the brightest coloration and the less colourful male (right) incubates the eggs and rears the chicks. Photo:© Anne Pang

And finally, here is a delightful sequence of a local sparrow reveling in its bathing. 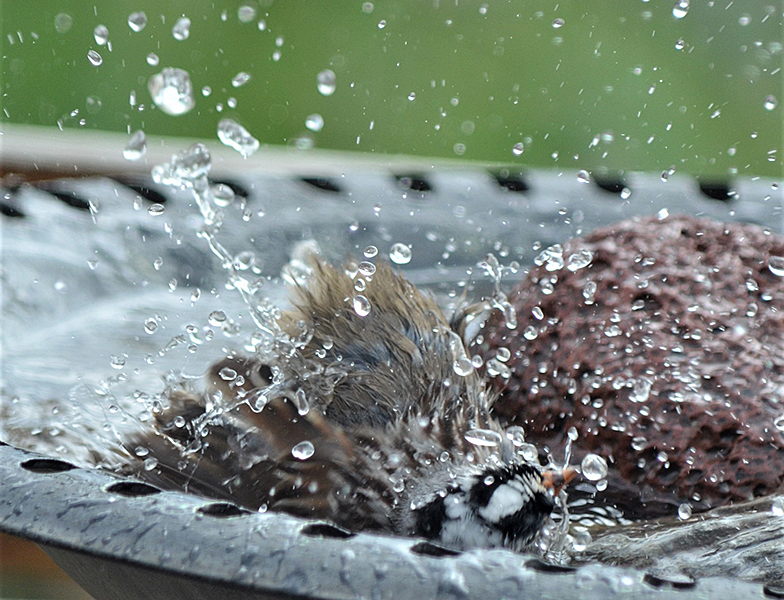 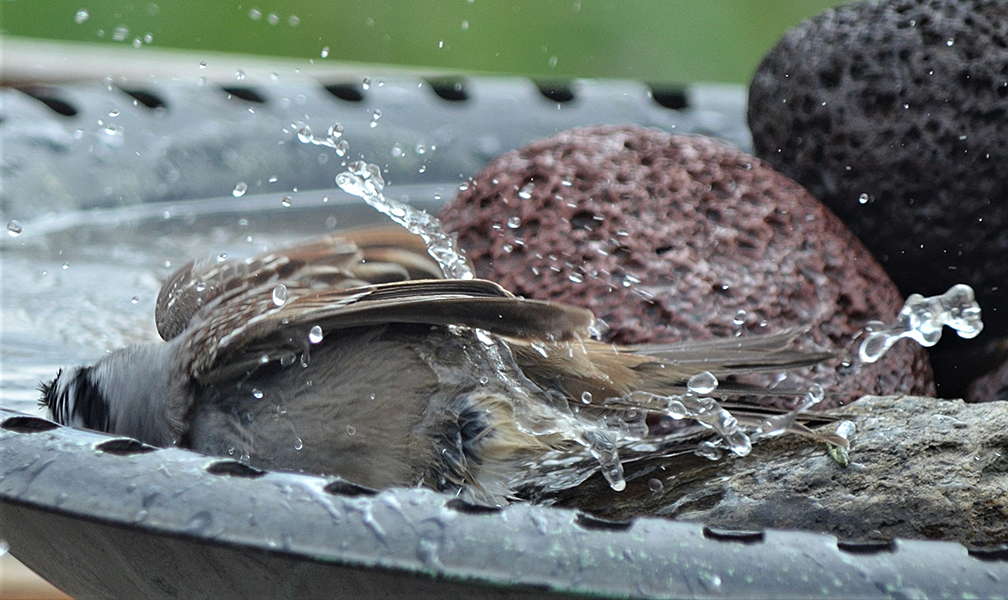 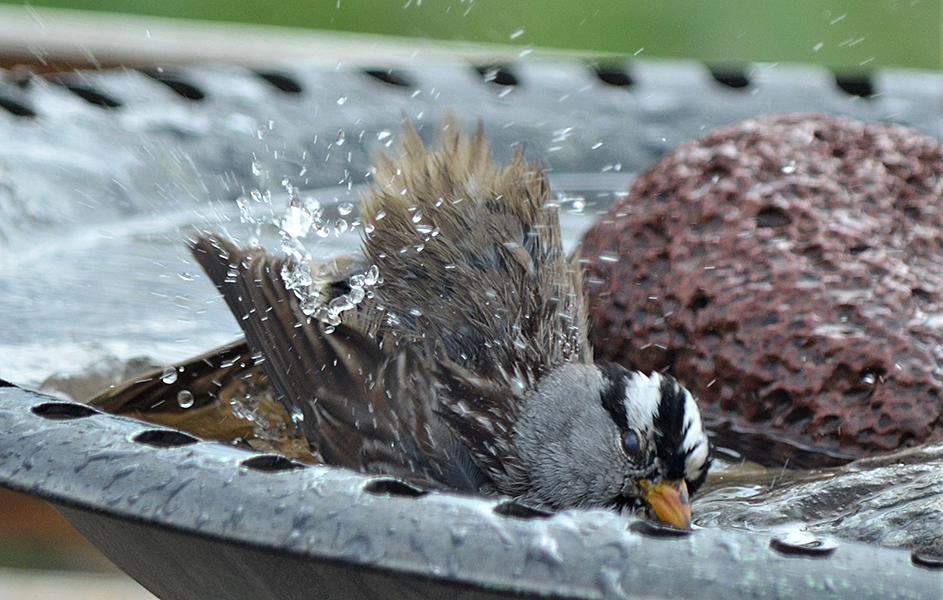 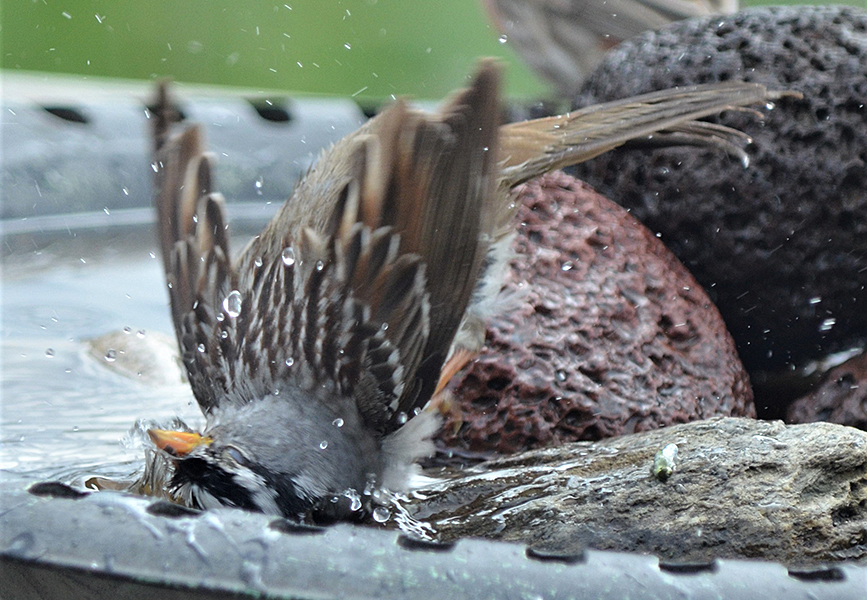 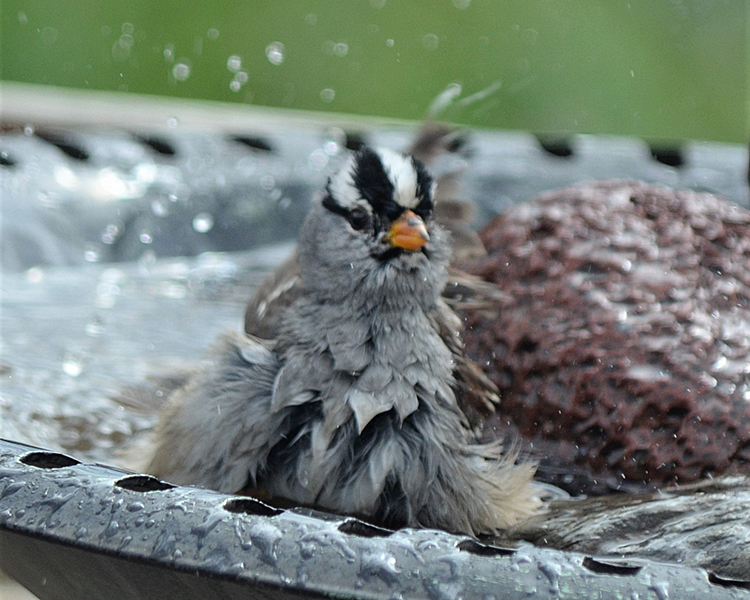