This is the fourth in our series of virtual spring outings during the 2020 COVID restrictions, with photos by members of the Nicola Naturalist Society. Scroll down to enjoy a bumper crop of interesting spring photos.

As the end of May approaches we are still seeing some new arrivals of spring migrant birds and many have settled down, selected territories and are singing and nesting. Some of the resident birds get an early start on breeding. Great Horned Owls are among the first of our birds to start pairing up and nesting – often while there is still a lot of snow on the ground. So in May this is what you might see …………… 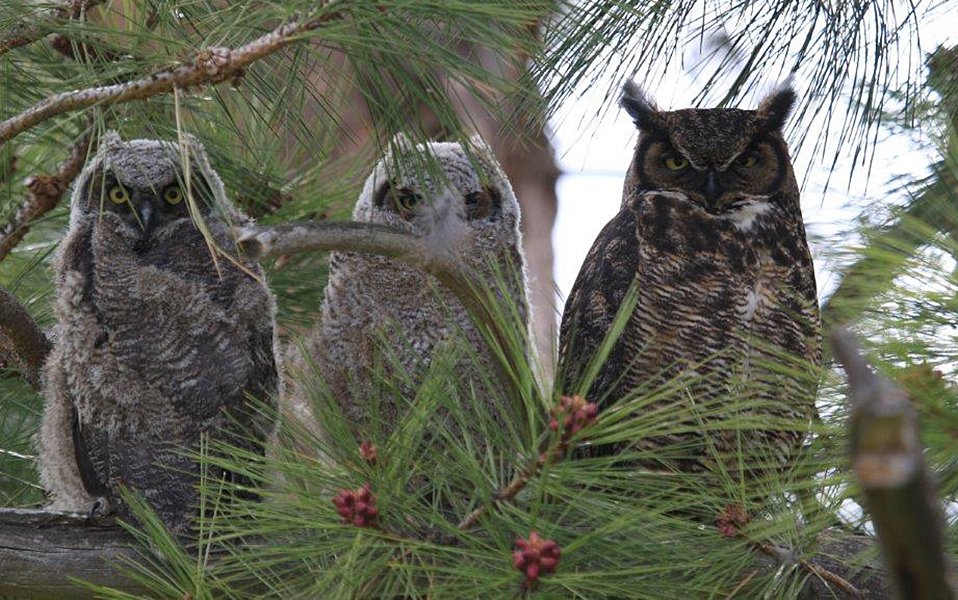 Mom – or it could be Dad – and two half-grown Great Horned Owl chicks near their nest in the Coutlee area. Note the beginnings of the feathery “horns” even in these young chicks. Photo: ©Pat and Cathy Tombes 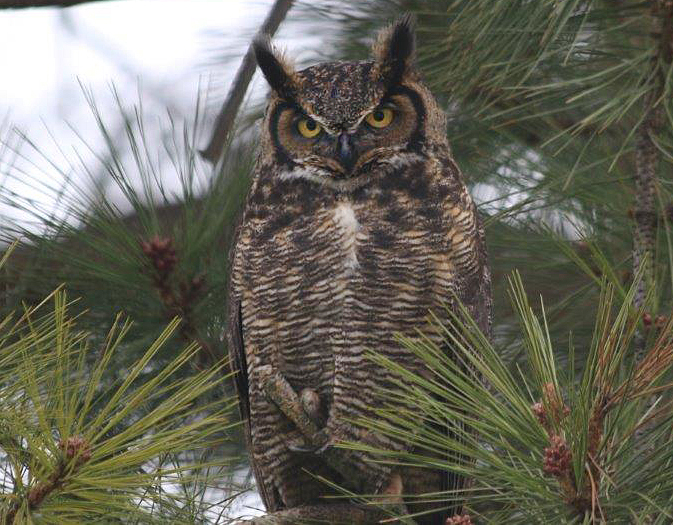 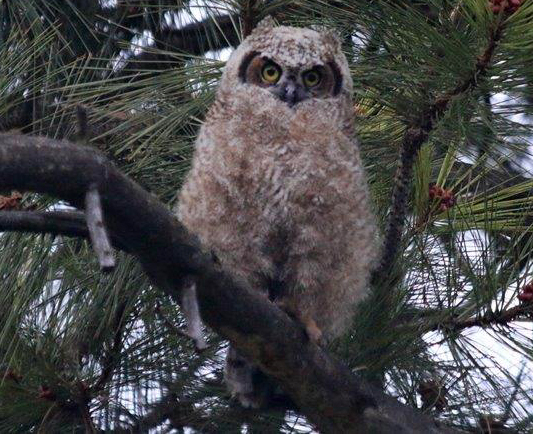 Even at a young age, Great Horned Owl chicks start moving around the branches near their nest site. The parents keep a close watch over them. Photo: ©Pat and Cathy Tombes

Many waterfowl also get an early start in breeding. So in late May we might expect broods of tiny ducklings or goslings to appear.

Other waterfowl are still in courtship mode. Ruddy Ducks have one of the most unusual courtship displays. 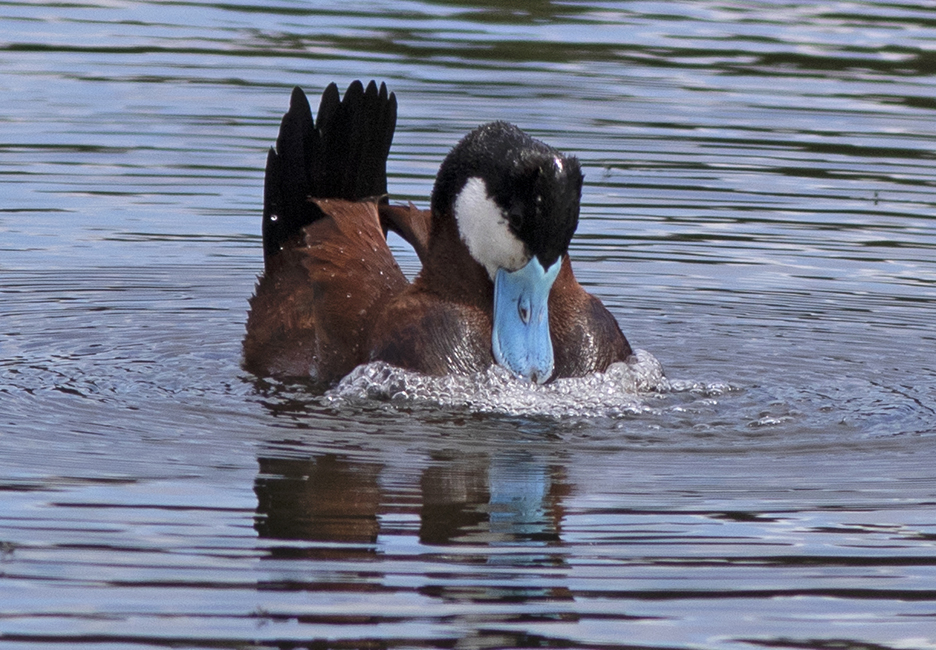 A Ruddy Duck male giving its unique bubble display. The bird pumps its head up and down, beak just touching the water and blows bubbles. Female Ruddy Ducks must find this irresistible, although there was no female in sight to appreciate this particular display. Photo taken at the Logan Lake Marsh reserve. ©Alan Burger 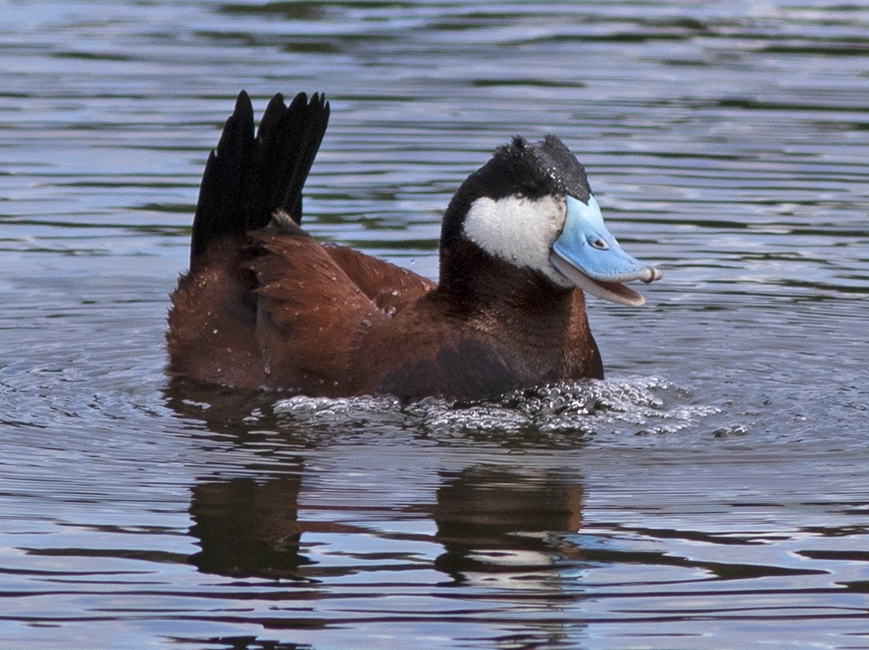 And if the bubbles don’t do the trick, the female’s heart will melt at the sight of the powder blue and pink beak. Photo: ©Alan Burger

Warblers are a welcome addition to our spring avifauna. Although they are sometimes hard to see high in the trees, their cheerful songs liven up our spring soundscape. 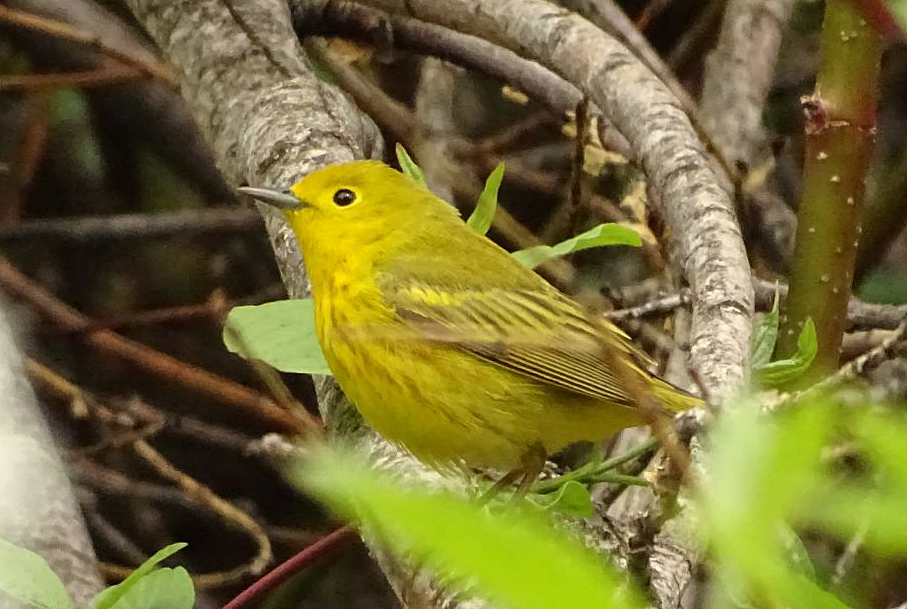 One of our brightest warblers, Yellow Warblers are most often found in deciduous trees and shrubs, like willow thickets. Photo: ©Anne Pang 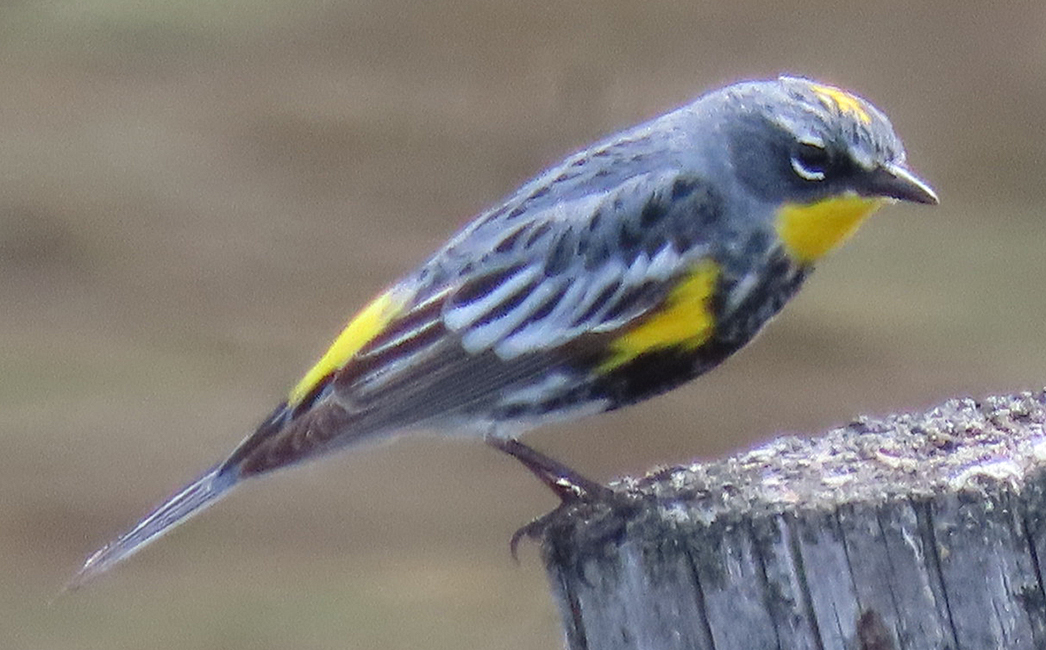 Yellow-rumped Warblers are probably our most common warbler, found in a wide variety of forest and bush habitats. Photo: ©Vic Newton 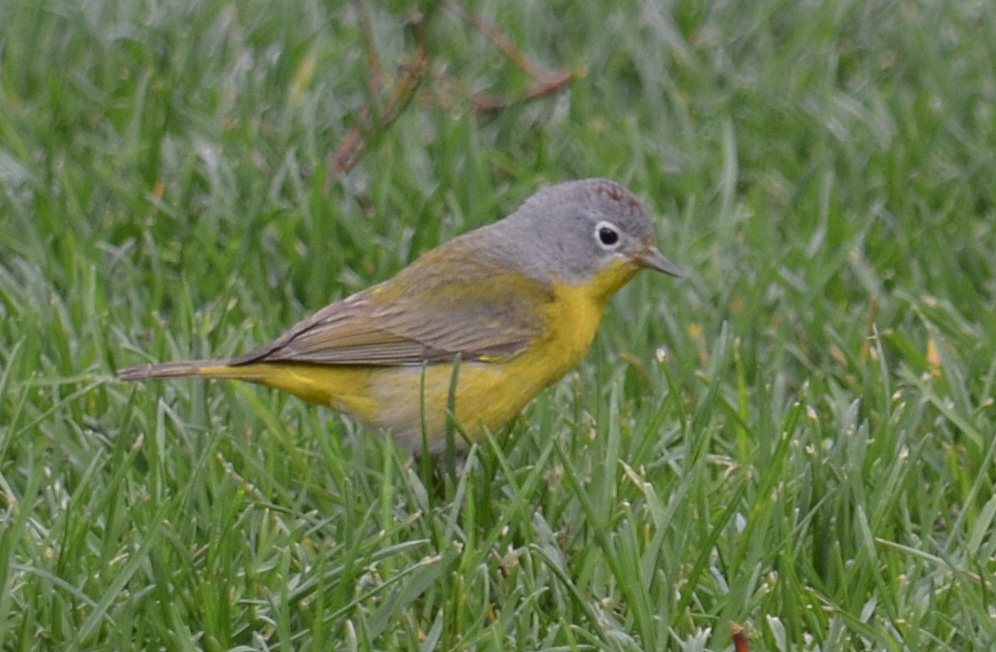 One of our less common warblers, Nashville Warblers are always welcome visitors in the “Country & Western Music Capital of Canada”. Photo:©Paul Willms 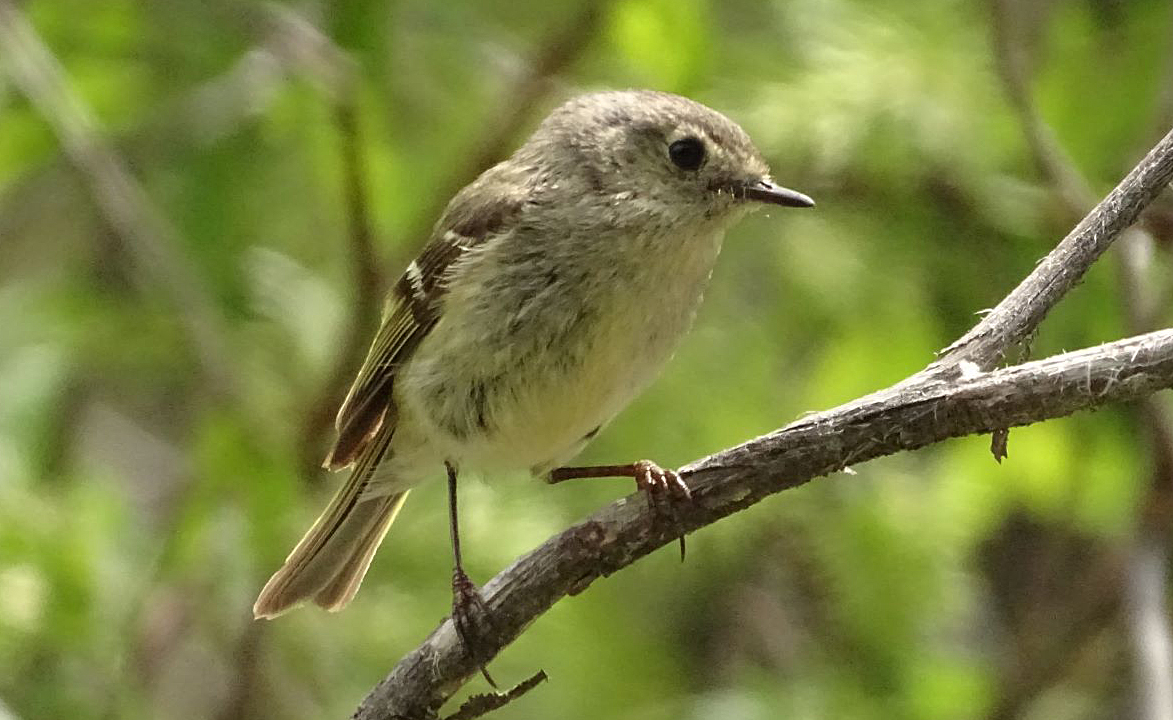 This is not a warbler, but the tiny Ruby-crowned Kinglet is a common and very vocal member of our forest community. Photo: ©Anne Pang

Finches have strong and melodious voices too. Cassin’s Finches are quite common in our area from spring through fall. They are one of the more unusual songbirds in that the female can often be heard singing from a treetop as well as the male. They look similar to the resident urban House Finches but have subtle differences in plumage and song.

Cassin’s Finch, female (L) and male (R). Both sexes generally show more of a slight crest on the head but in these photos the head feathers are slicked down. Photos:© Paul Willms 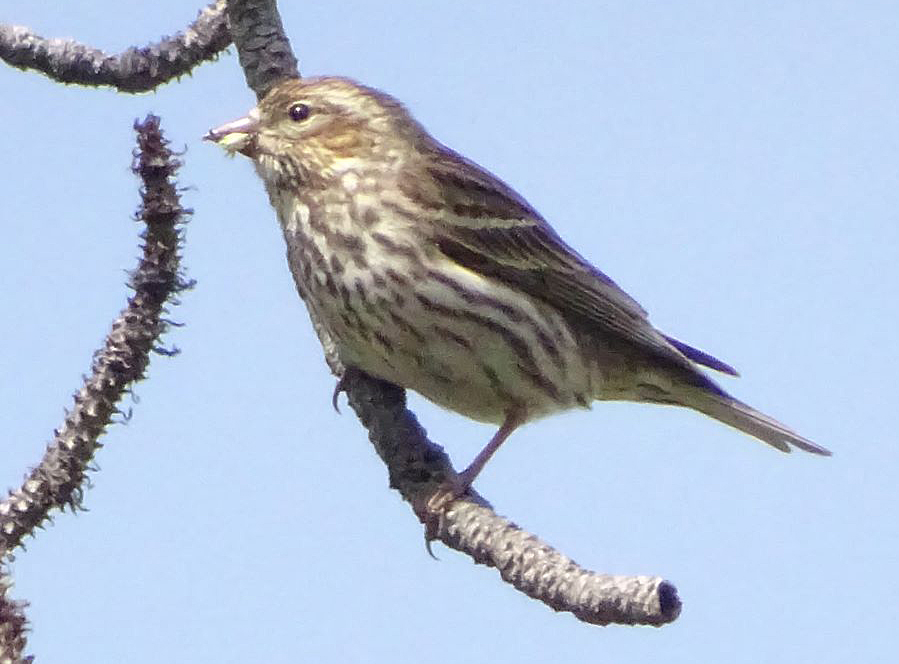 Another look at a female Cassin’s Finch. Photo: ©Anne Pang 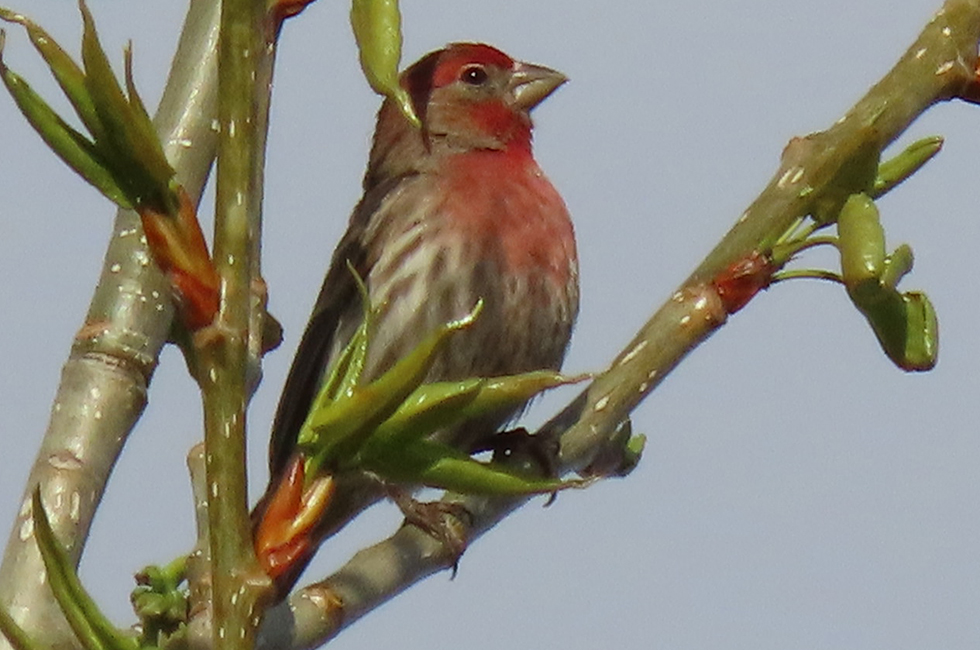 Here is a male House Finch to compare with the Cassin’s Finches. This species has a shorter beak than Cassin’s and has a slight “sneering” look to the curved beak. There are subtle differences in the plumage too. Photo: ©Vic Newton 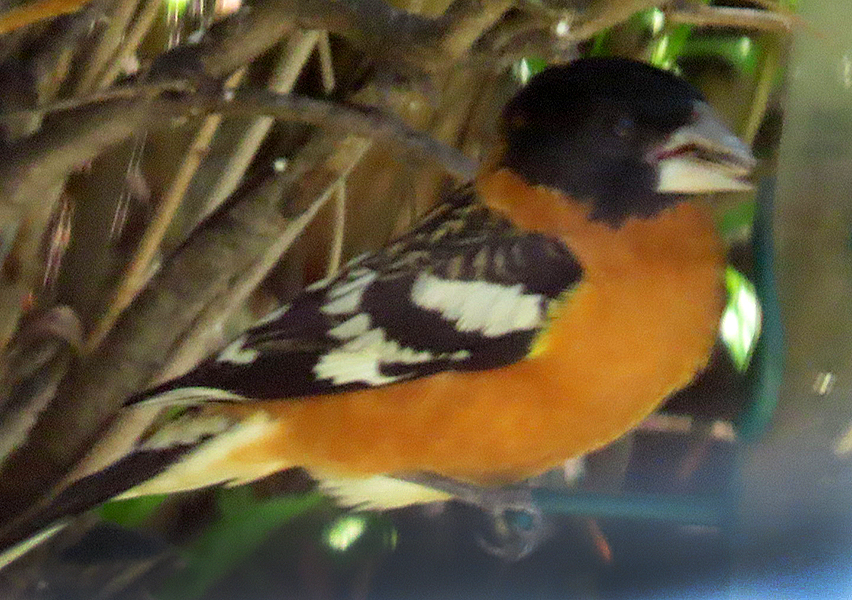 Black-headed Grosbeaks are uncommon spring-to-fall visitors in our area. With the chunky beak they look a bit similar to the resident and common Evening and Pine Grosbeaks, but they are not closely related to those species. This is a male. Photo: ©Vic Newton

Swallows are, of course, harbingers of spring and summer. Six species of swallows breed in our area, using different nesting sites. These two species are both common and sometimes hard to separate in flight. 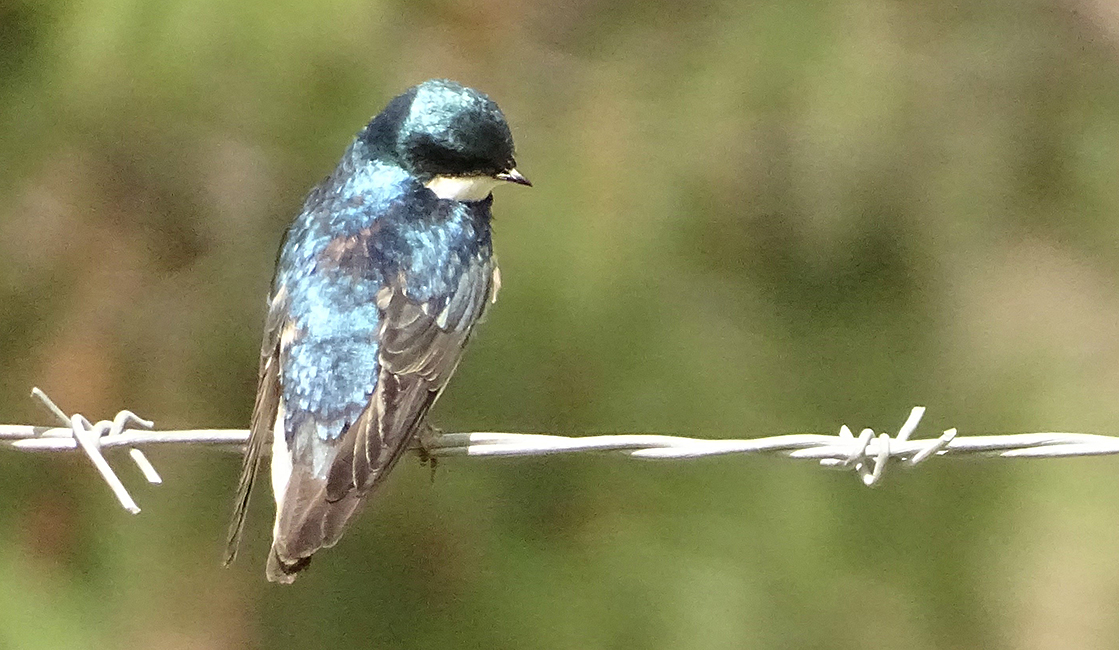 Tree Swallows are probably our most common and widespread swallow, nesting in tree cavities (usually old woodpecker nests) and nest boxes. In flight they look similar to Violet-green Swallows (see next photos) but sitting on a wire they are easier to separate. Photo: ©Anne Pang. 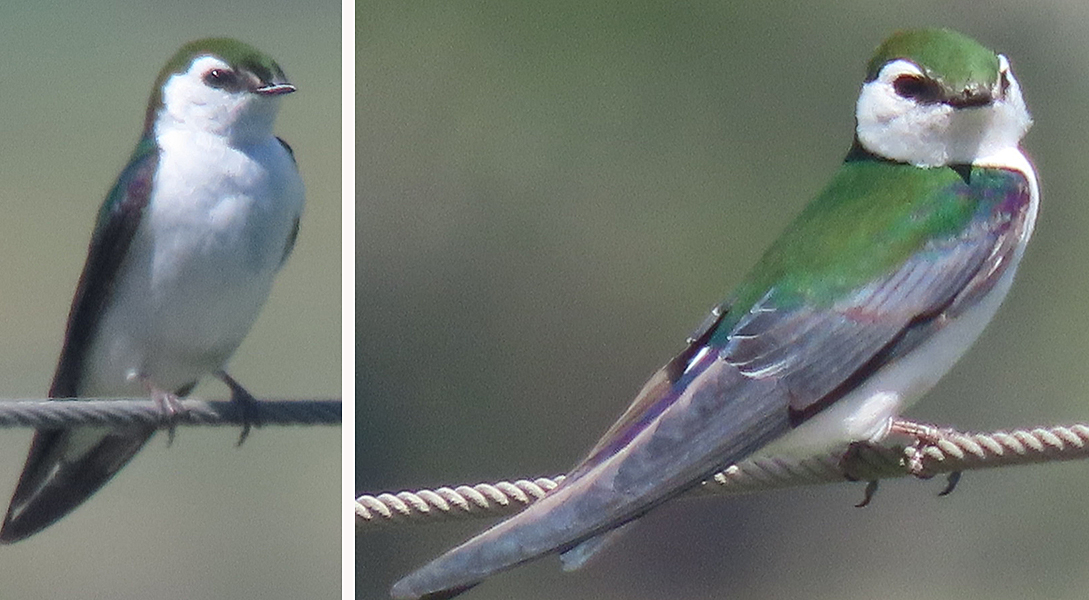 Front and side views of an aptly-named male Violet-green Swallow. Photos: ©Vic Newton

A few more of our spring migrant birds: 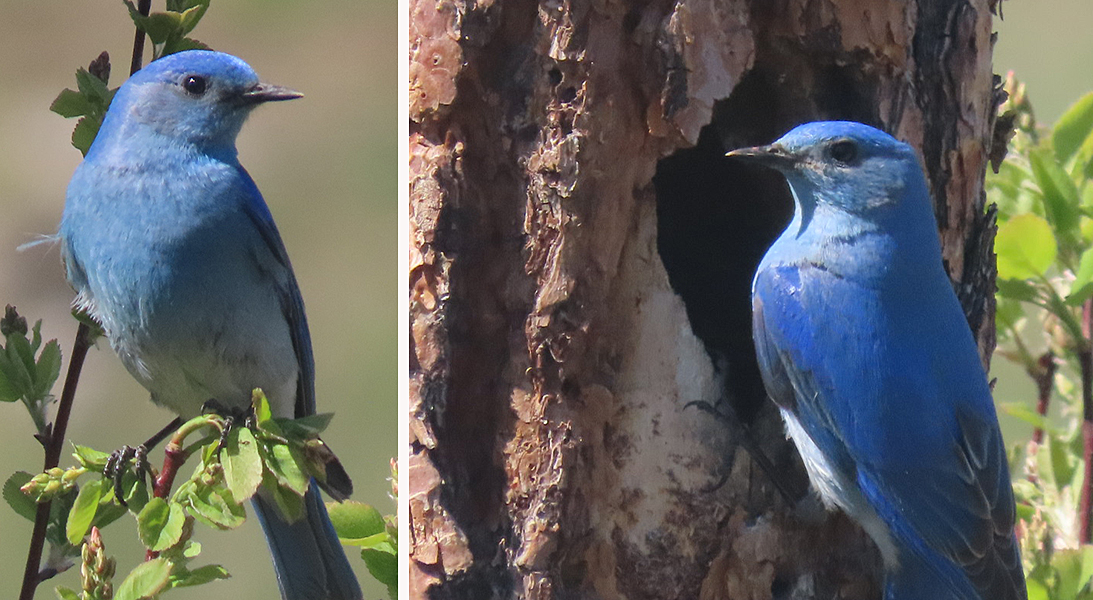 The unmistakable intense blue of a male Mountain Bluebird. They are most often seen at nest boxes placed for their use on fence-posts, but this male is using a natural cavity, probably excavated by a woodpecker. Photos: ©Vic Newton 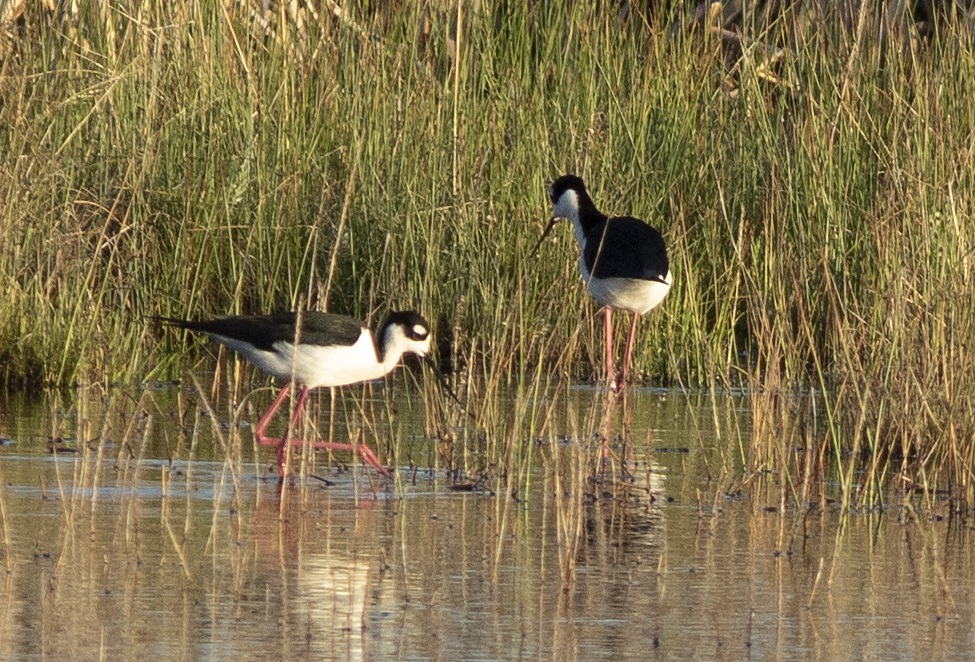 Are Black-necked Stilts becoming a regular visitor to the Nicola Valley? This pair was found in a shallow pond near Tunkwa Lake north of Logan Lake on May 25th. See our Virtual Spring Outing #3 for other photos of this rare shorebird. Photo: ©Alan Burger 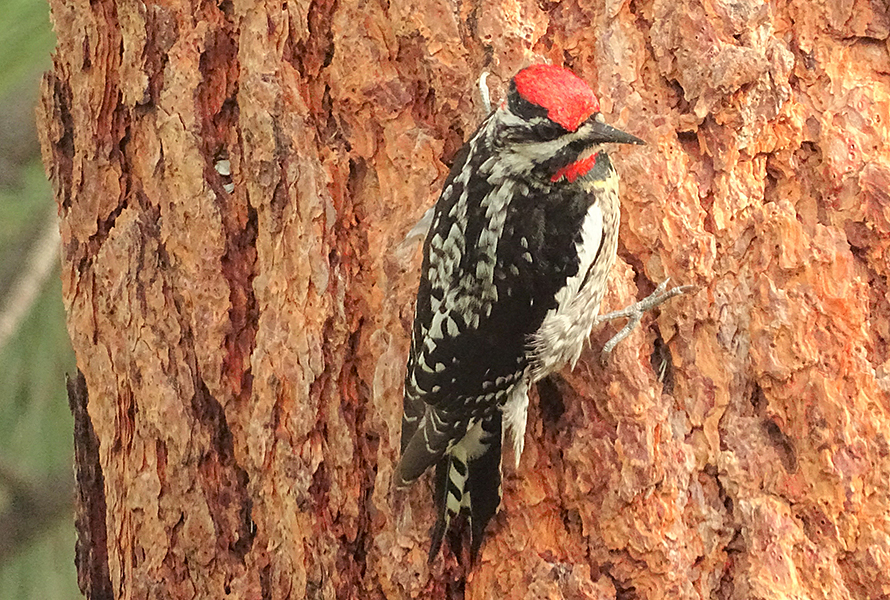 While most woodpecker species remain with us year-round, Red-naped Sapsuckers migrate south for the winter. Their distinctive staccato drumming is a feature of the spring forests. Photo: ©Anne Pang 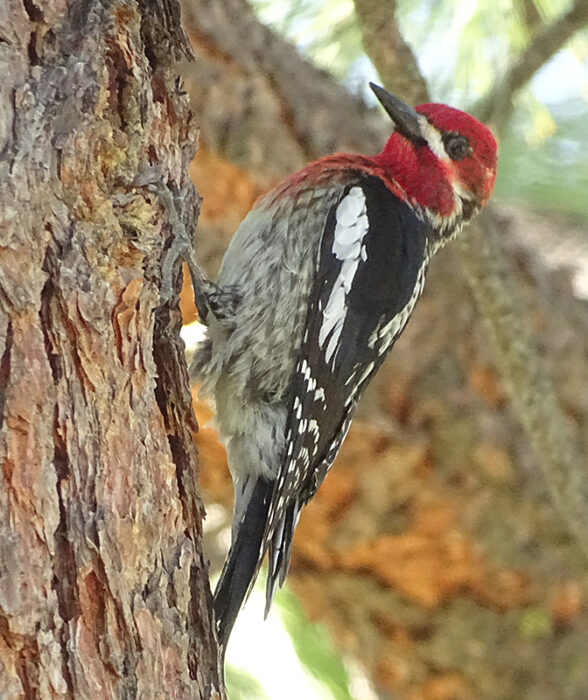 Another view of the Red-naped Sapsucker. Photo: ©Anne Pang 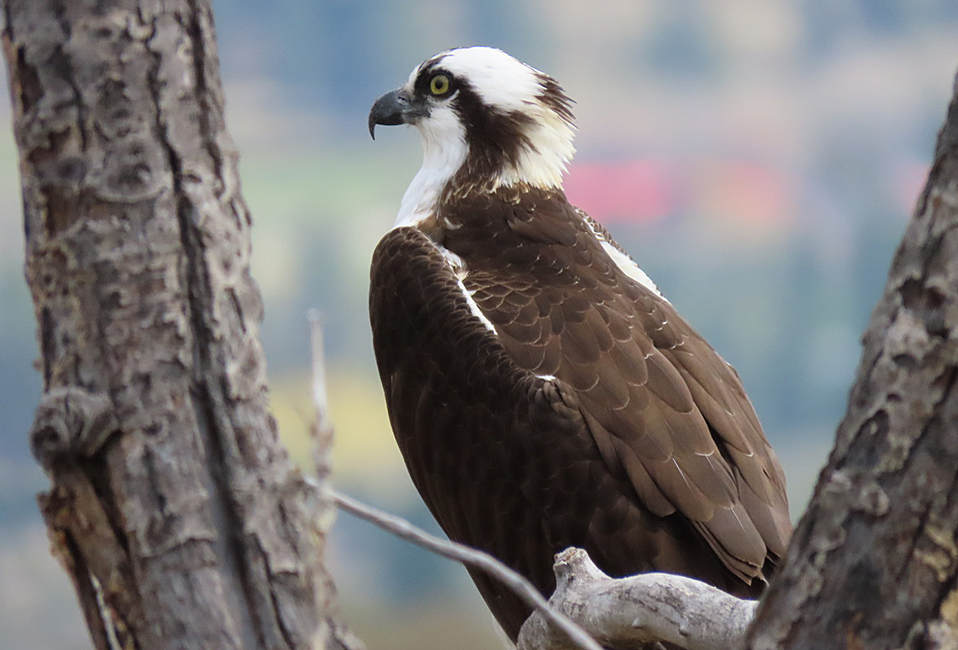 Fish-eating hawks, Ospreys are a common site from spring to fall in our area, along rivers and lakes. Photo: ©Vic Newton 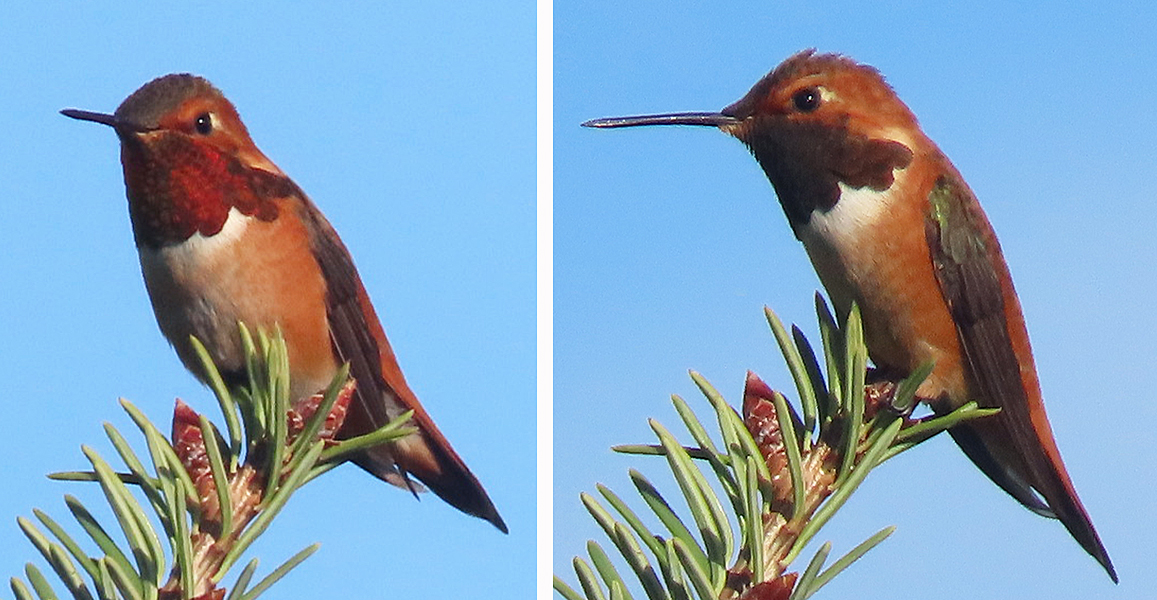 A male Rufous Hummingbird – our most common hummer. The males are aggressive little demons, driving away other hummingbirds at feeders and flower patches. Photos: ©Vic Newton. 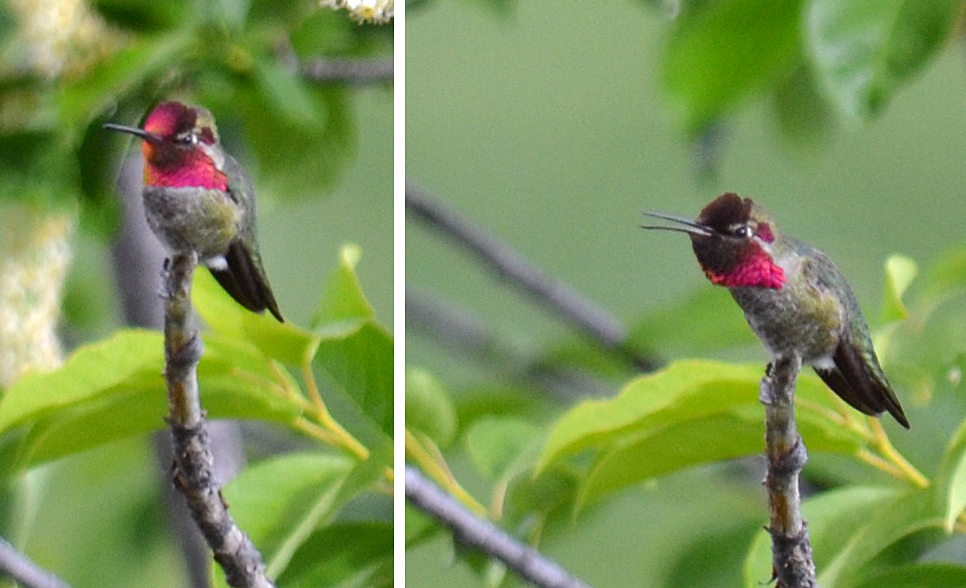 A male Anna’s Hummingbird. Unlike our other hummers this species does not undertake long-distance migrations and on the BC coast winter feeders allow it to stay all year round. In the past decade this species has started showing up more often in the Merritt area but is still rare. Photos: ©Paul Willms

Some mammals and insects too are emerging as spring progresses. 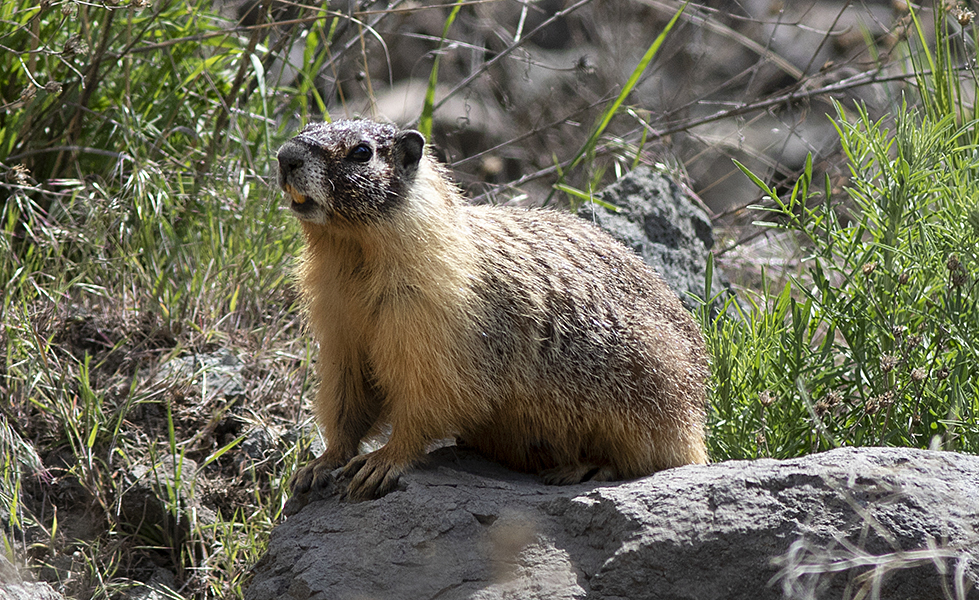 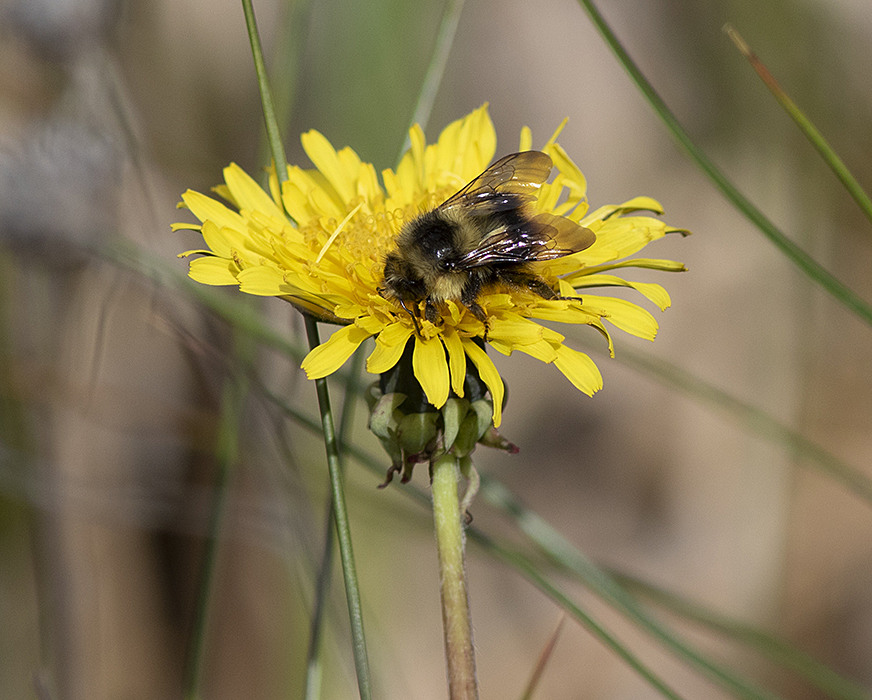 A bumblebee visiting a dandelion flower. In their efforts to rid their pristine lawns of dandelions people often overlook the value that these spring flowers have to many pollinators, like bees. Photo: ©Alan Burger

And our resident species remain interesting and varied. 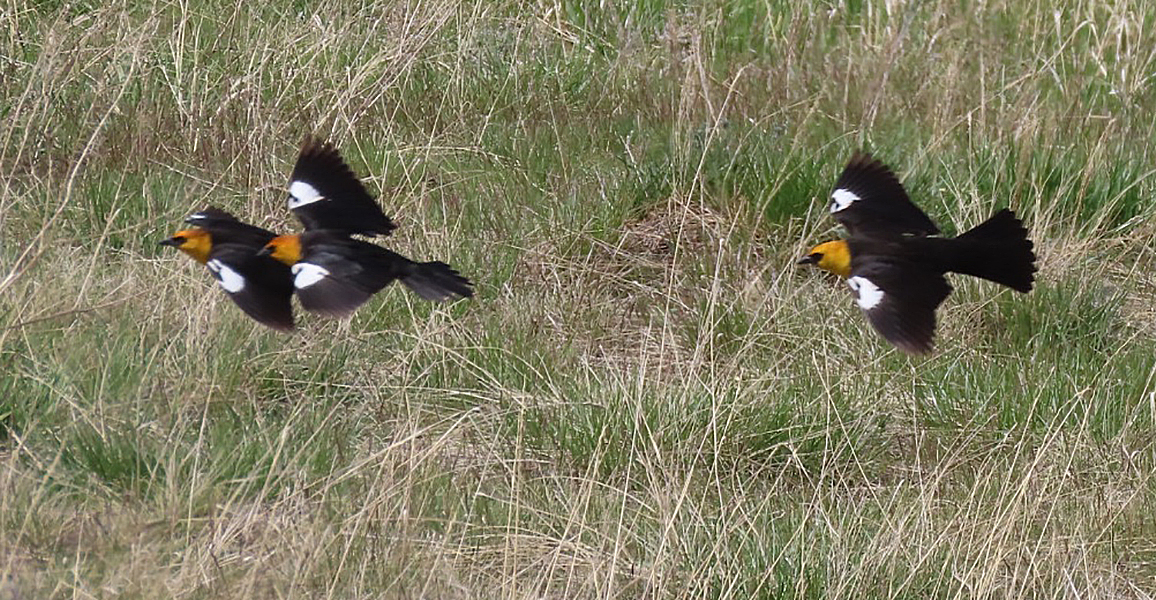 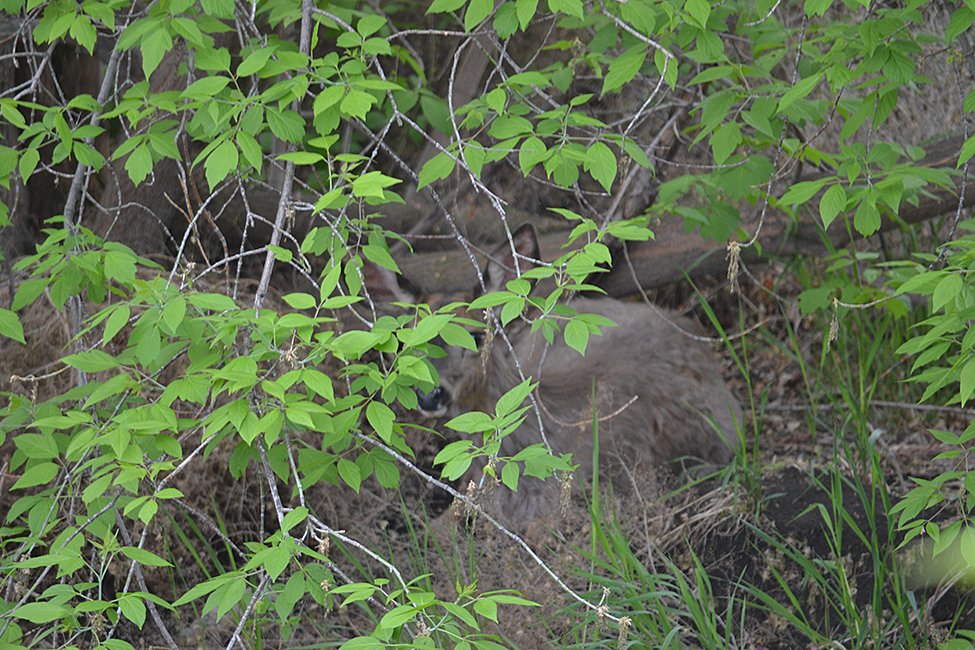 Hard to see! A mule deer resting in a shady nook near the Merritt golf course. Photo: ©Paul Willms. 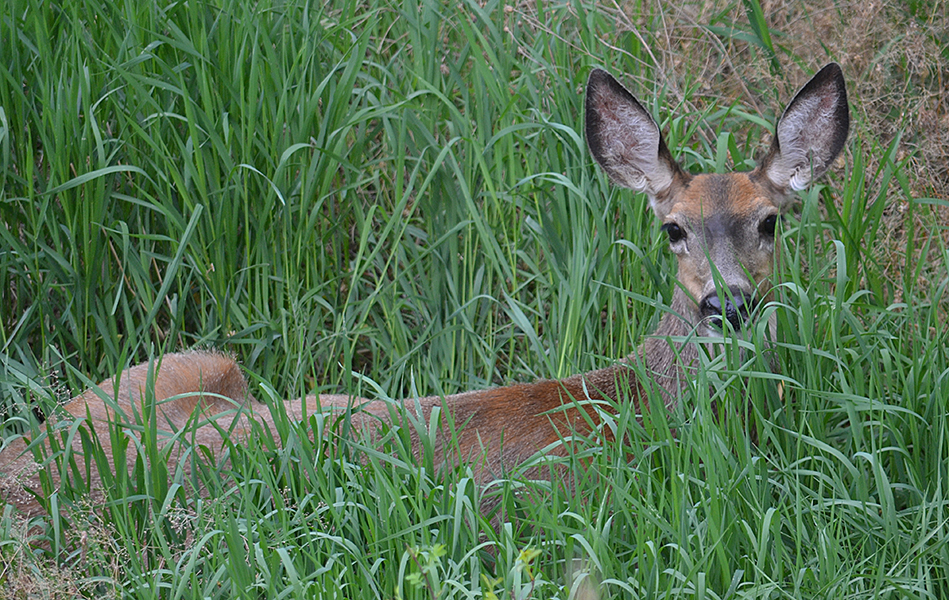 Relaxing in the long grass – another urban deer in Merritt. Photo: ©Paul Willms. 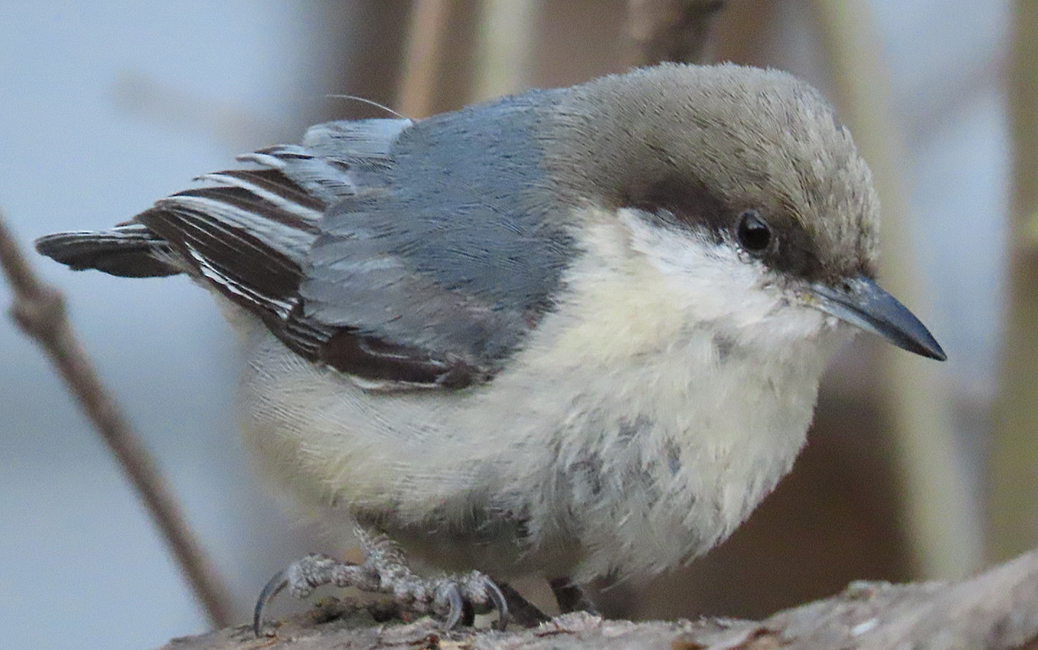 A charming close-up of the tiny Pygmy Nuthatch. Fond of big old Ponderosa Pines this bird has become harder to find after the pine beetle infestation killed many of our veteran Ponderosas. Photo: ©Vic Newton

We mentioned singing at the start of this outing. Well no group of birds can match the strenuous effort that wrens put into their songs. These tiny birds produce loud and prolonged songs that will drown out many much larger species.

House Wrens are common in thickets throughout our area. Their loud song is a mix of rattles and varied trills. This species often takes over nest boxes intended for bluebirds or swallows. Photo: ©Anne Pang 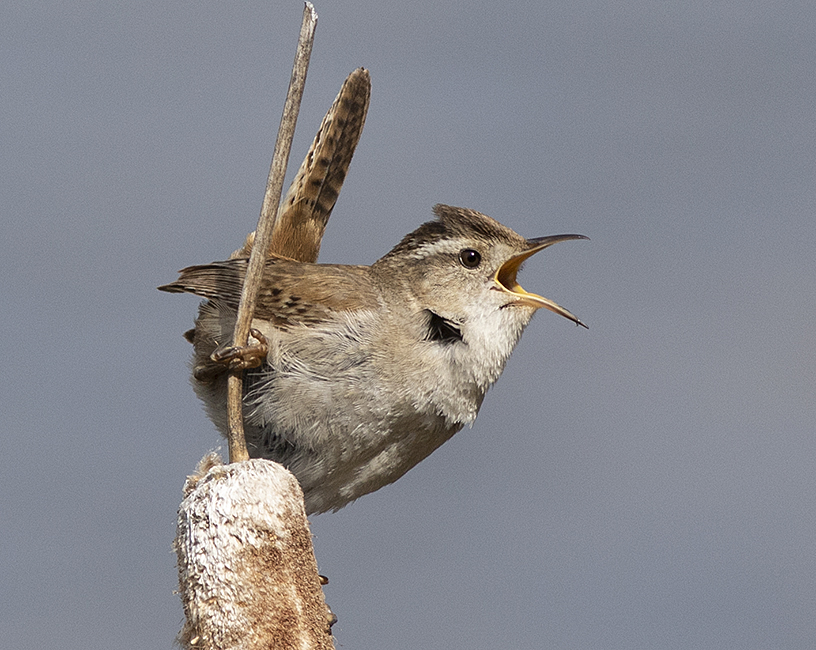 A Marsh Wren belting out its spring song from a cat-tail in the Logan Lake Marsh. Photo: ©Alan Burger. 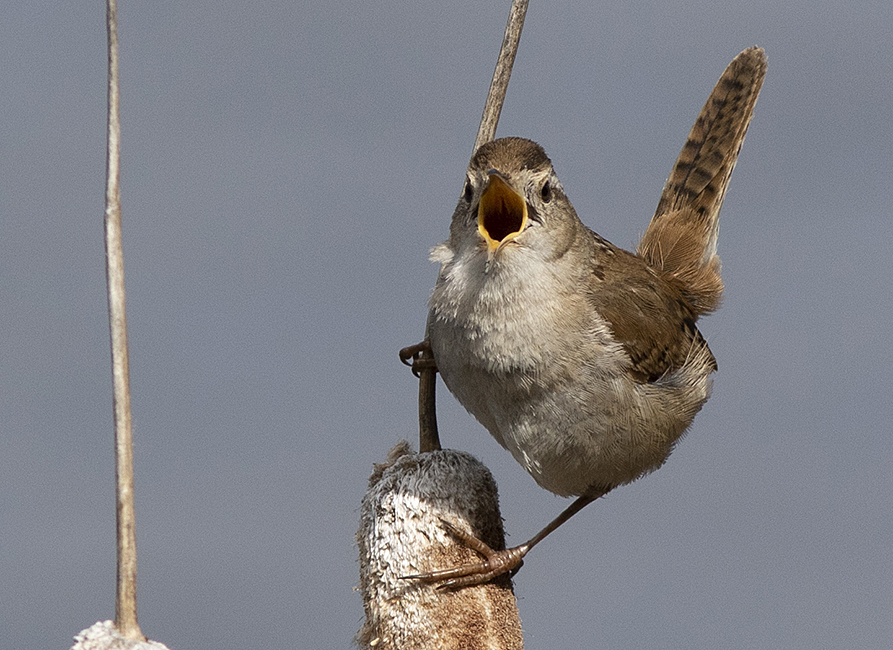 Broadcasting in all directions – a Marsh Wren gives a view down its capacious throat. Photo: ©Alan Burger 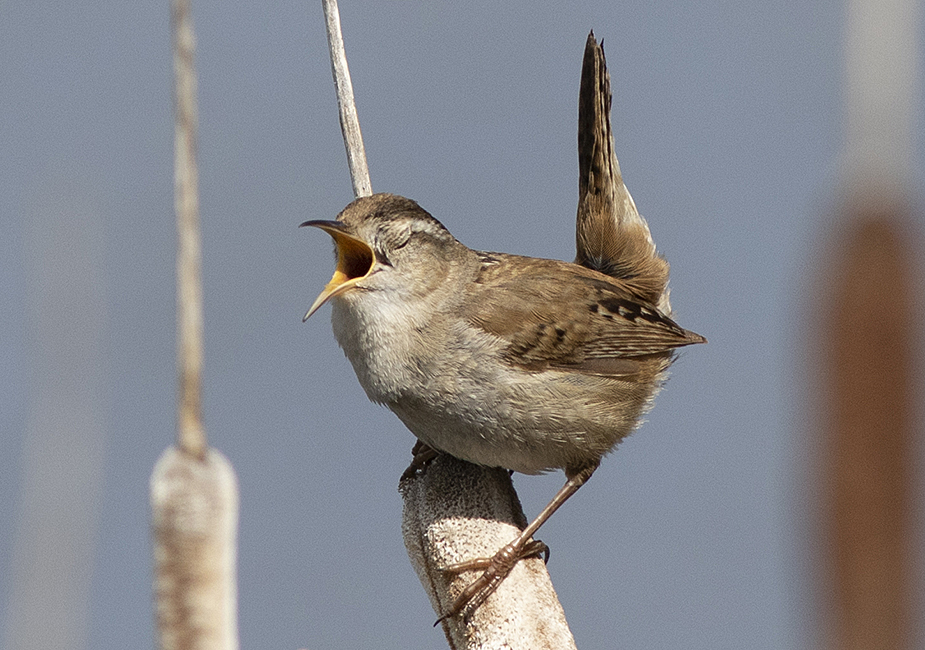 Like any opera star, sometimes a Marsh Wren sings with eyes closed to get the full volume output. Photo: ©Alan Burger